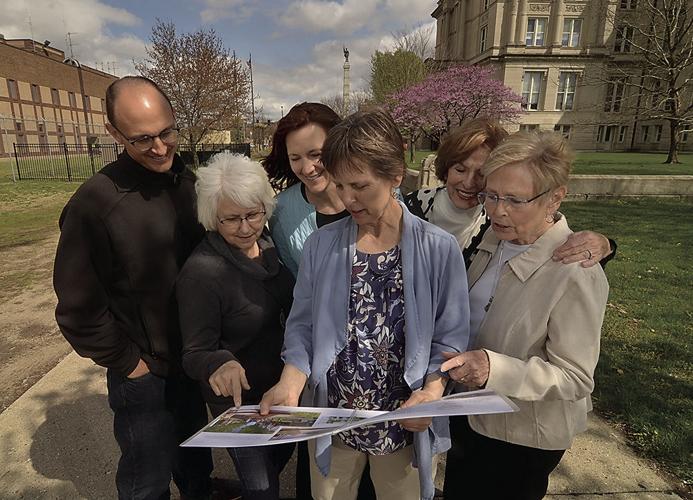 Art Spaces Executive Director Mary Kramer, center, with plans, and Turn to the River project members T.J. Hellmann, Barbara Weber, Maggie Dalrymple, Kay Farmer and Bev Cristee, look over the project's plans and stand where the pathway will be that leads citizens to and from the Wabash River to downtown Terre Haute. 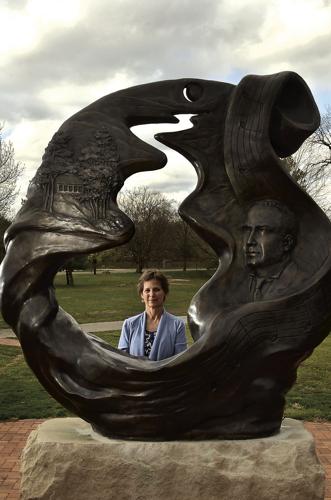 Like Paul Dresser did in 1897 with his song, "On the Banks of the Wabash, Far Away," Art Spaces Executive Director Mary Kramer and her fellow Turn to the River project members want to bring attention to the splendor of the Wabash River. 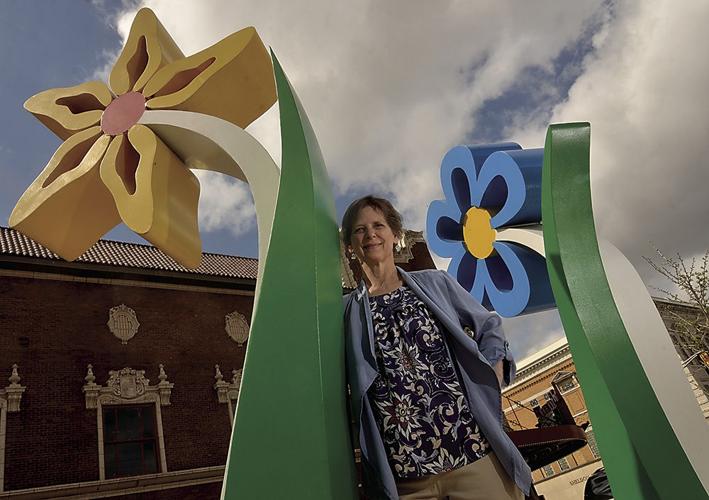 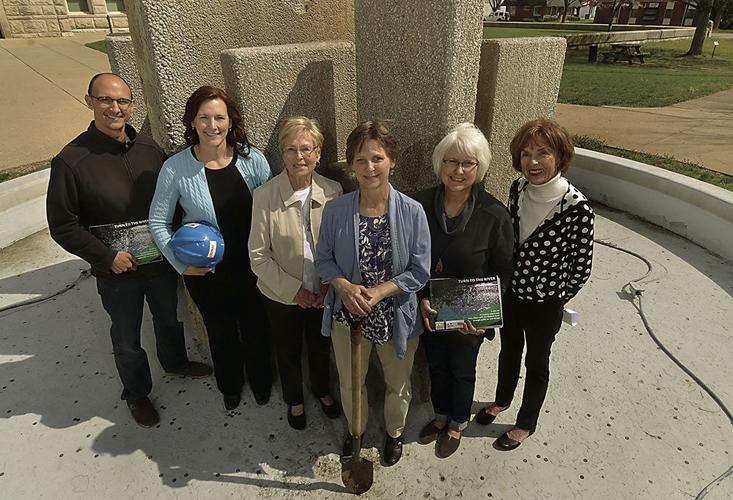 Art Spaces Executive Director Mary Kramer, center, with plans, and Turn to the River project members T.J. Hellmann, Barbara Weber, Maggie Dalrymple, Kay Farmer and Bev Cristee, look over the project's plans and stand where the pathway will be that leads citizens to and from the Wabash River to downtown Terre Haute.

Like Paul Dresser did in 1897 with his song, "On the Banks of the Wabash, Far Away," Art Spaces Executive Director Mary Kramer and her fellow Turn to the River project members want to bring attention to the splendor of the Wabash River.

What started as a project to replace a decaying fountain at city hall became an idea that will ultimately transform a city. The groundbreaking Turn to the River initiative that will improve the quality of life for Terre Haute, its community members and future residents.

Turn to the River is an arts-driven city design project that will reconnect downtown Terre Haute with the Wabash River through public art, design and green space.

The area includes the four blocks of government campus, which includes Terre Haute’s City Hall, the Vigo County Courthouse and the County Security Center. That area will be redesigned as a place with seating areas and small gathering spots for the public to enjoy outdoor life and green space.

A beautifully landscaped walking promenade will lead people through this area and the city’s parking lot, and to the river, where the city-owned property of One Wabash will be redesigned. Leading to that area, the remaining one block portion of Wabash Avenue may be designed as a shared walking/driving road. Public art – from single pieces to artist-designed spaces – will be included in each area.

Other aspects of the Turn to the River project include a possible solar-powered charging station with seating for people to use the outdoor space for working on their laptops and charging smart phones. The city parking lot may become a space for public weekend activities such as a farmers market, arts festivals and other community events.

The redesign will also include a flexible performance structure with an open platform and archway for pop-up performances.

The result will be a place Terre Haute residents will want to gather, be outdoors and connect to the historic downtown landmarks, their government area and Wabash River.

Mary Kramer, executive director of Art Spaces, has been spearheading Turn to the River. She envisions Turn to the River as a project that will connect people to the Wabash River through a public green space where people can have lunch, visit a food truck or attend a public gathering.

“Right now, people really dislike visiting that area and tend to only travel there for negative reasons,” Kramer said. “We want a government center that is appealing. Maybe it will compel more people to get involved if the area is more inviting.”

The origins of Turn to the River

The idea of Turn to the River began in 2007 when then-Mayor Kevin Burke approached Kramer and Art Spaces about replacing the fountain at City Hall with a work of public art. After looking more closely at the entire space, it was determined that area needed much more than a new piece of public art.

The project continued when Mayor Duke Bennett assumed office and was on board with moving plans forward. In 2012, Art Spaces received a grant through the National Endowment of the Arts’ “Our Town” program to begin holding public planning meetings where community members articulated what they wanted to see in the space, and visual concepts were designed.

One of our major community goals is to make the Wabash River more accessible to our citizens,” said Bennett. “This specific project will create a very distinct ‘gateway’ from the center of the downtown area directly to a new park area on the river.”

While Turn to the River is a project that is helmed by Art Spaces, Kramer notes it would not be a viable concept without the community partners who are working on different aspects of the project.

The city and county government are incredibly supportive of the effort, Kramer said. Riverscape, Arts Illiana and other groups also play an important role. The Art Spaces Turn to the River Committee includes a designer, an architect, artists and art educators, community health professionals, business people and volunteers. In addition, the administration, faculty and students at Indiana State University and Rose-Hulman Institute of Technology are taking an active role in development and design ideas for Turn to the River.

A group of Rose-Hulman freshmen are designing the overhang that will go through the new parking lot to shade the farmers market and arts festivals, and four seniors are planning the open performance structure as their final design project. A group of students engineered a trail that would run from the ISU campus riverside trail north of Cherry Street, go under the two bridges, and continue to Fairbanks Park.

Aside from a beautiful space and public art, Turn to the River will be much more for Terre Haute.

“[Turn to the River] is another part of improving the overall quality of place in our community,” Bennett said. “It is important to invest in projects that provide new destinations and amenities that set our community apart from others. Creating these types of recreational opportunities can also lead to better health for those who use it along with creating a sense of pride in our city.”

ISU President Dan Bradley echoes the mayor’s sentiments about how the project will help improve life in the city. “Anything that makes Terre Haute a more inviting place to live is going to positively impact the city, and Turn the River does that,” Bradley said.

The next phase in Turn to the River is the design development, which Art Spaces and its partners are working on securing funding for now. They hope to kick off the design phase in late 2017 or early 2018, and have the project completed within five to 10 years (depending on funding received).

One aspect of the design that is already being conceptualized is the idea to celebrate Terre Haute’s diverse past and how it connects to today through public art. Sculptures and displays may focus on how the city was built, and the different cultural groups that formed the city.

In keeping with the theme of turning to the Wabash River, the project will also include some type of public art connection to water. Barbara Weber is president of the Arts Illiana board of directors and has been involved in Turn to the River. She sees the project as extremely important in emphasizing the connection between Terre Haute and the Wabash River.

“Our community is so turned away from the river,” Weber said. “Now we want to turn back and connect.”

“I hear so many people who come to Terre Haute say they didn’t know there’s a river here. There’s no signage or connection. [The Wabash River] needs to be attached to our city … because it’s not just the river, but connecting the hub of our town. … We have to define who we are and this can really help Terre Haute do just that.”

• Downtown was originally planned with a courthouse square as its center, stretching from the Wabash River to Fifth Street, and from Eagle to Swan Streets.

• The City of Terre Haute exists because of the Wabash River, which constituted a primary means of transport for people and goods for many centuries.