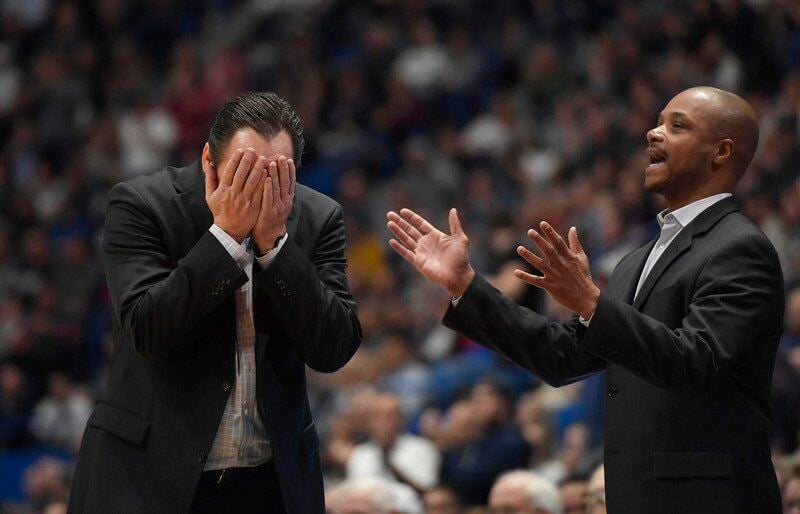 Wichita State head coach Gregg Marshall, left, and assistant coach Isaac Brown are shown during the second half of an NCAA college basketball game in Hartford, Conn., Sunday, Jan. 12, 2020. Wichita State coach Gregg Marshall resigned Tuesday, Nov. 17, 2020, following an investigation into allegations of verbal and physical abuse, ending a tenure that soared to the Final Four and crashed on the eve of the upcoming season. Shockers assistant coach Isaac Brown will serve as the interim coach. (AP Photo/Jessica Hill, File) 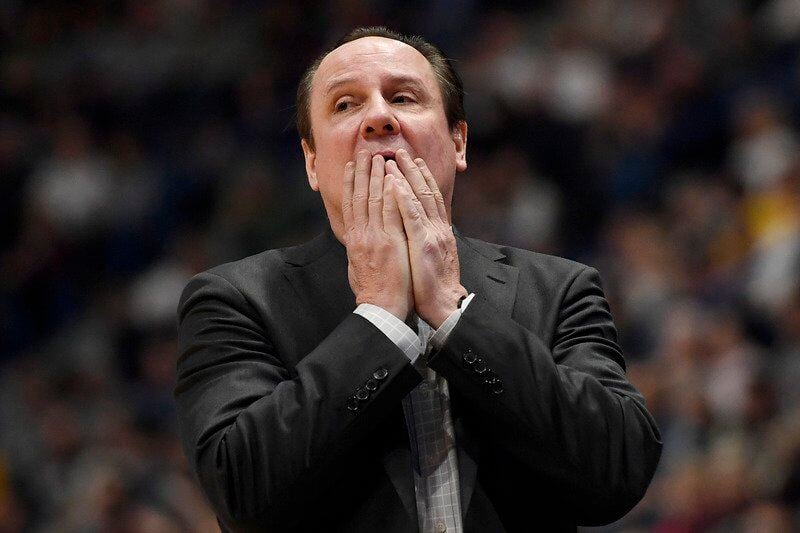 FILE - In this Jan. 12, 2020, file photo, Wichita State head coach Gregg Marshall reacts in the second half of an NCAA college basketball game against Connecticut, in Hartford, Conn. Marshall resigned Tuesday, Nov. 17, 2020, following an investigation into allegations of verbal and physical abuse, ending a tenure that soared to the Final Four and crashed on the eve of the upcoming season. (AP Photo/Jessica Hill, File)

Wichita State head coach Gregg Marshall, left, and assistant coach Isaac Brown are shown during the second half of an NCAA college basketball game in Hartford, Conn., Sunday, Jan. 12, 2020. Wichita State coach Gregg Marshall resigned Tuesday, Nov. 17, 2020, following an investigation into allegations of verbal and physical abuse, ending a tenure that soared to the Final Four and crashed on the eve of the upcoming season. Shockers assistant coach Isaac Brown will serve as the interim coach. (AP Photo/Jessica Hill, File)

FILE - In this Jan. 12, 2020, file photo, Wichita State head coach Gregg Marshall reacts in the second half of an NCAA college basketball game against Connecticut, in Hartford, Conn. Marshall resigned Tuesday, Nov. 17, 2020, following an investigation into allegations of verbal and physical abuse, ending a tenure that soared to the Final Four and crashed on the eve of the upcoming season. (AP Photo/Jessica Hill, File)

Since Wichita State was once part of the Missouri Valley Conference, I still read my fair share of WSU news. I have colleagues — some still in the business, some out of it — in Wichita that I consider friends so I still maintain an interest.

Of course, we also have a local connection to WSU as Clinton native and former ISU associate head coach Lou Gudino is an assistant at WSU. Former Terre Haute South standout guard Craig Porter is slated to start his WSU career shortly too.

The demise of former WSU men's basketball Gregg Marshall, he resigned on Tuesday, has received national attention, as it will anytime a one-time Final Four coach leaves a job under a cloud.

To summarize for those who haven't paid attention, Marshall was accused on-record by a former player — Shaq Morris — that he was allegedly struck by Marshall in 2015 and subject to verbal abuse.

The situation came to a conclusion when Marshall and WSU negotiated their separation. WSU will not terminate Marshall with cause, which would have meant he received no compensation and which would have exposed WSU to potential legal ramifications — and the possibility they knew of these accusations before 2020. Instead, Marshall will be paid $7.75 million to go away.

As a "bonus" for both parties, Marshall and the university will not publicly disclose anything. WSU has already cowered behind a favored weapon public entities use to fend off public records requests — claiming they are "confidential personnel records".

There's a lot of this affair that is depressingly familiar and disappointing. Universities will never learn to reign in coaching misbehavior because there's no financial motivation for them to do the right thing. If anything, it's the opposite.

WSU may have to pay Marshall $7.75 million over six years to keep things quiet and to avoid litigation, not an insignificant sum with COVID-19 ravaging budgets, but when you consider the return on investment for WSU since 2007? The heightened public profile for the university? The bank vaults of lucre the Shockers swam in? At risk of my 16 years in this business betraying my cynicism, they might say, in their most private moments, that the alleged misbehavior was all worth it.

Apart from that, there's another aspect of this that irks me the most. Once again, the inequity between student-athlete and coach is made clear and what little universities do to try to balance the scales.

The oft-asked question, and it comes up every time misbehavior becomes public after the fact, is why didn't Morris go public in 2015?

To answer the question legitimately, without taking into the account the partisanship of fans who either damn or support a coach to the hilt, put yourself in Morris's shoes.

He's a scholarship athlete. All of the power — especially in 2015 before scholarship and transfer rules became more liberalized, but still today — over who does or doesn't have a scholarship lies with the head coach. They are the sun, moon and stars. Once you sign a Letter Of Intent? You're at their mercy.

Most coaches handle this power responsibly, but we also know there are too many who don't. Allegations of abuse are constantly shoved under the carpet and the threat of exposing abuse is often draconian for the whistle-blower.

Athletes know where the power lies and there's no protection for them to do the right thing. It is your word against your coach, who is almost always backed by the athletic administration behind them, regardless of whether they suspect wrongdoing or not.

In theory, the university can overrule a coach, but few do. Why? The donations and ticket sales that are lifeblood for many schools are, more or less, tied to a personality cult. Winning coaches can get away with anything and universities won't say boo because they need the money that comes with the winning.

In the dollars versus scruples battle? Dollars win with a running clock. All of the high-minded mission statements bellowed to students and student-athletes are made a mockery of and chucked to the curb.

This is true for comparatively low-profile programs — see Michigan State gymnastics or even here with Indiana State softball in the early-to-mid 2010s (no one involved has wanted to go public with that situation). Imagine what the dynamic is like for an athlete who wants to call out abuse at a program winning at a national level?

In 2015, Marshall was well nigh untouchable in Wichita. I know, I walked out of Koch Arena with my eardrums blasted by the adoration annually. Even I got somewhat taken in by the winning. I wrote that Marshall should be considered to be Tom Crean's replacement at Indiana in 2017. Not my best moment.

At the time of the alleged Morris incident, Marshall was two years removed from the Final Four and one year removed from an undefeated regular season. Absolutely no one — not WSU officials, not MVC officials, not the WSU media, no one was in a position where they were going to challenge Marshall's hegemony. He was the king of Wichita and no one in their right mind was going to storm that castle — and he knew it.

Marshall and a cowed university hold all of the cards. So once again, think about Morris's options in 2015. He could have gone public right away and then been demonized for being "soft" and/or "bringing the program down".

Fans, wrapped up in the glory and the personality cult that comes with a winning coach, would have been falling over themselves to lead the village mob against an athlete who would have been given tepid support by a university that is supposed to be looking out for them.

We know that because those of us of a certain age lived through the same thing during the Bob Knight era at Indiana. People will tolerate and turn a blind-eye to anything if they're winning.

Fans will twist themselves into Gordian knot trying to defend the un-defendable. One thing they will often say is, "it would have been better had the [filled in name of accusing former athlete] came out with this at the time."

Get real. In the days where Ron Baker and Fred VanVleet were still active and WSU harbored national aspirations and a burning desire to escape the MVC? Morris would have been crucified if he went public in 2015. He was going up against unchecked power.

As it is, Morris is being demonized by some WSU fans anyway. Only he knows whether it's all worth it, even years after the alleged incidents took place.

This is why the relationship between universities and student-athletes needs to be balanced out. The NCAA and member schools need to fix this by making scholarships four-year commitments instead of year-to-year commitments.

Doing so would change the power dynamic between coach and athlete and make universities less likely to hide behind their desks and their donations when they've made a flawed hire.

Coaches have too much power, universities and fans enable it, and athletes are left to be pawns who have to remain silent or else. Until that simple dynamic is addressed? It's only a matter of time before we hear of another alleged incident just like this one.