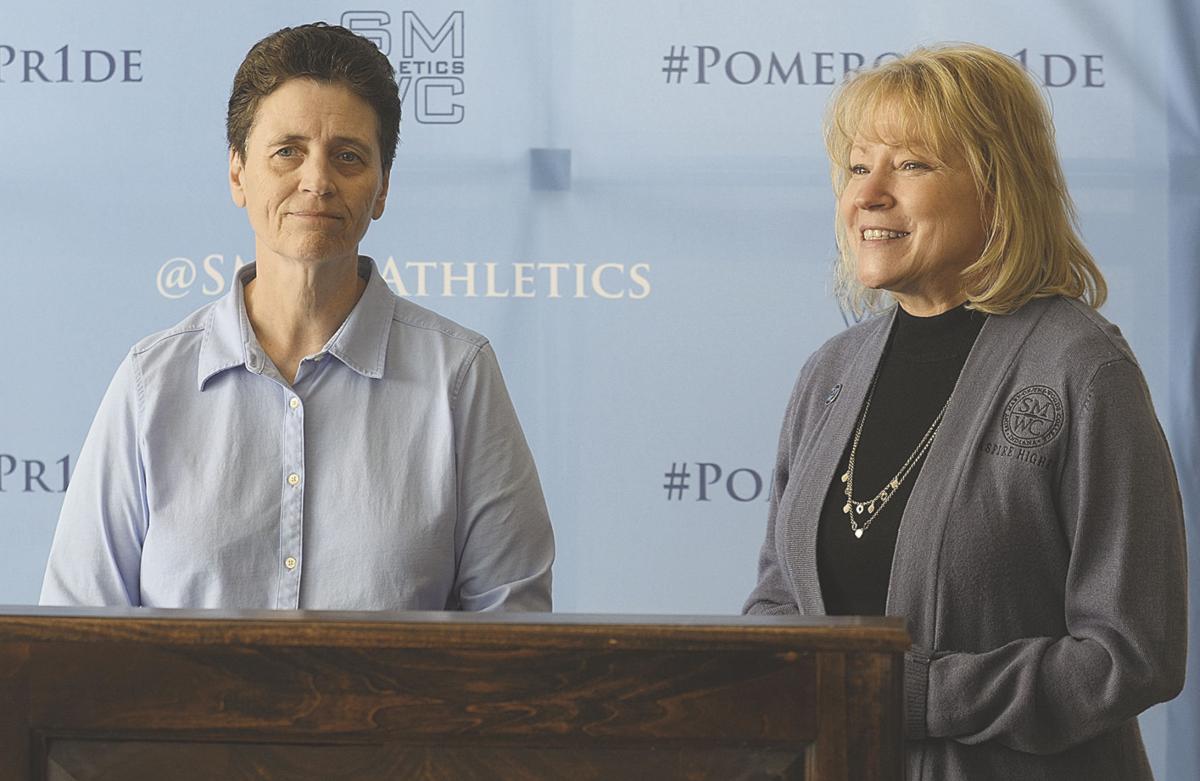 Tribune-Star/Joseph C. Garza She was there from the beginning: Saint Mary-of-the-Woods College President Dottie King, right, acknowledges the hard work of Athletic Director Deanna Bradley, left, throughout the years to help develop the college's athletic program during the announcement of the men's basketball program on Wednesday on the SMWC campus. 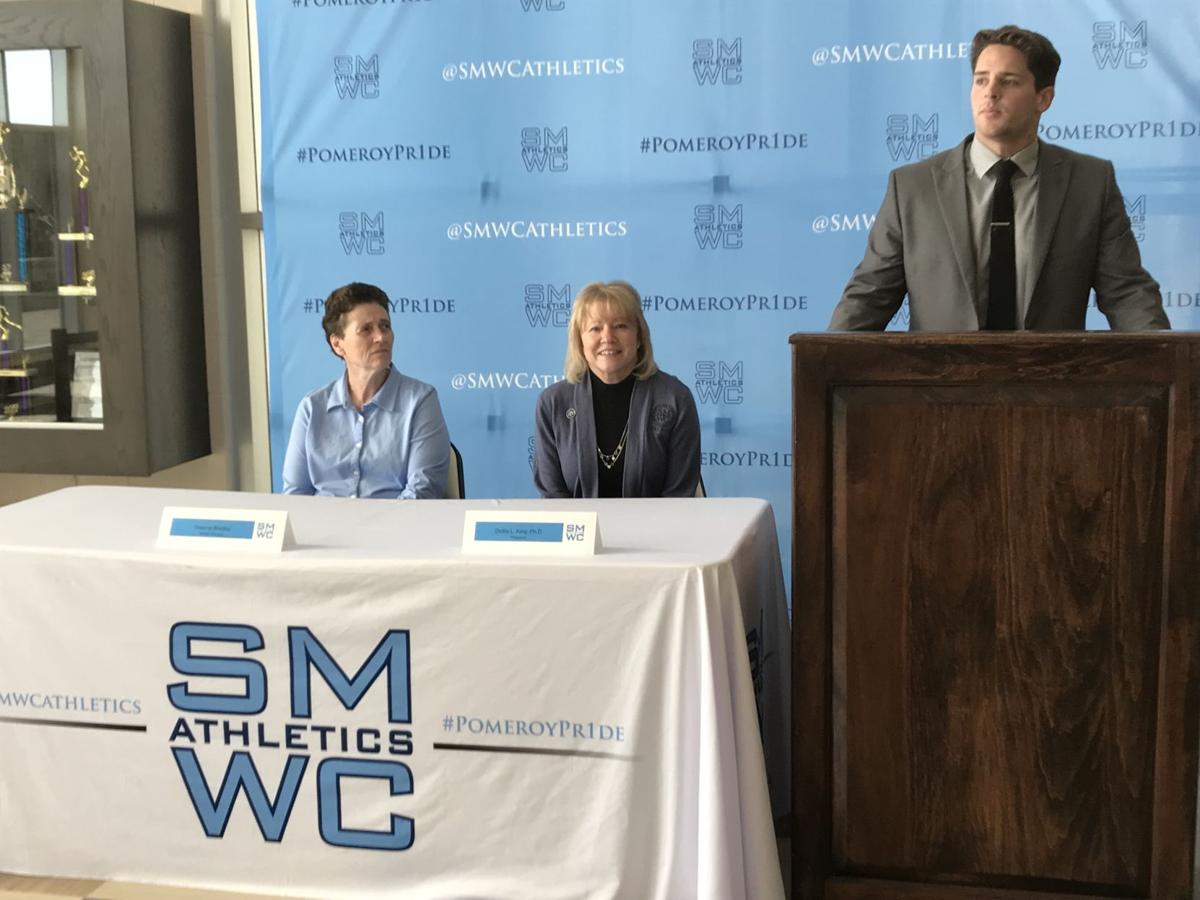 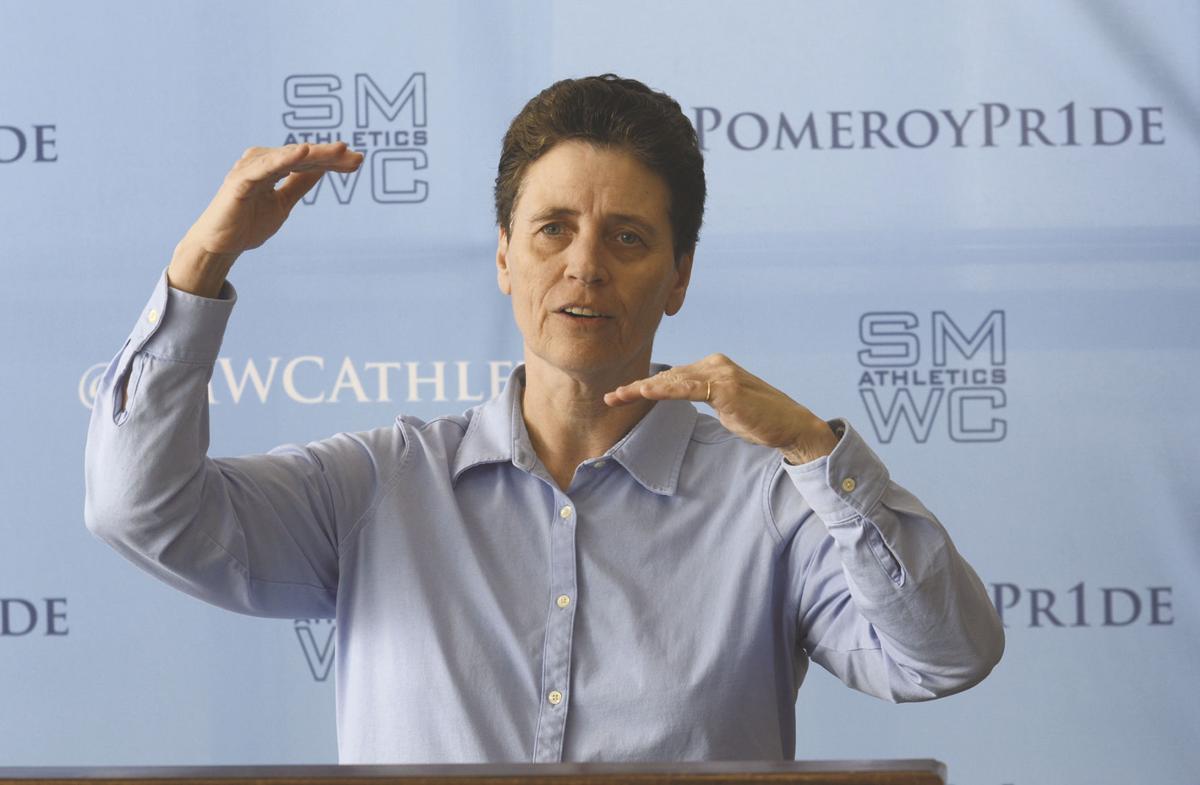 Tribune-Star/Joseph C. Garza Taking the program to a higher level: Saint Mary-of-the-Woods College Athletic Director Deanna Bradley explains how the college's new coeducational designation has raised the level of the athletic program during the announcement of the college's men's basketball program on Wedensday on the SMWC campus.

Tribune-Star/Joseph C. Garza She was there from the beginning: Saint Mary-of-the-Woods College President Dottie King, right, acknowledges the hard work of Athletic Director Deanna Bradley, left, throughout the years to help develop the college's athletic program during the announcement of the men's basketball program on Wednesday on the SMWC campus.

Tribune-Star/Joseph C. Garza Taking the program to a higher level: Saint Mary-of-the-Woods College Athletic Director Deanna Bradley explains how the college's new coeducational designation has raised the level of the athletic program during the announcement of the college's men's basketball program on Wedensday on the SMWC campus.

As St. Mary-of-the-Woods College has made its transition into a coeducational institution in the late 2010s, it has taken gradual steps in its athletics evolution as well.

Since 2015, SWMC has added men's golf, men's soccer, men's equestrian, men's soccer and men's track and field to go along with its long-established women's programs.

All important milestones, but the SMWC athletic department made a statement of its intent on Wednesday as it introduced that it will add the most visible sport of all in Indiana — men's basketball.

"It's exciting. We started with zero in 1992-93 because we decided to start from scratch. To see it develop over the decades that I've been here, it's really exciting to see the effect of the athletic program on the entire campus," said Bradley, who has been a part of Pomeroys athletics from their 1990s beginnings.

King said the addition of men's basketball fits with the growth of the college.

"Since we became a coeducational institution, this question has come up often. We've taken our time to do lots of things well and we're now excited to add men's basketball. It's part of our strategic plan to continue to move forward," King said.

Men's basketball will be SMWC's 14th varsity sport and play is scheduled to begin during the 2021-22 season. Bradley said that start date will give the program time to find the right coach and for that coach to be able to have time to recruit for a start-up program.

"Our preference is someone who has recruiting experience and a college background. We anticipate getting a lot of resumes and we'll who might be a good fit for the college. It's a small college scenario and starting a program is different than taking over a program. There's a lot of things we want to look at when we look at the resumes," Bradley said.

That means having a vision for growth ... and winning.

"A lot of it has to do with the background and the vision of a coach. Where do you see us in the next five years? We're looking for that visionary. We're in Indiana, this is the hub for basketball, we want a coach that can make us competitive immediately," Bradley said.

Men's basketball is a big step for SMWC. The college is hoping to create visibility for its athletics programs through men's basketball. The timing of the announcement is part of a process. When SMWC began accepting men mid-decade, it wanted to make sure it was ready for such a high-profile program.

"We've been co-ed long enough now that we don't have to talk about being co-ed anymore. When we looked at what was the strongest male program to bring in to bring more visibility to the institution, it was kind of a no-brainer, men's basketball fits that," Bradley said.

It was all part of SMWC's long-term plan.

"We have added men's sports one a year, every year, since we added men. We really wanted to take our time to make sure we were doing well with living arrangements and our traditions. Now we're doing well and it's all gone smoothly. Now this is the right time to go into a much more visible men's sports," King said.

And, of course, being the visible sport it is? Men's basketball can create opportunities for revenue streams and an avenue for donors to express support that other sports can't match.

"By elevating our athletic programs and moving in other directions we increase those opportunities for ourselves. We also have 90 acres out there and what athletic complexes we might put outside," King said.

SMWC isn't likely done with its men's sports startups. King addressed what the future might hold.

"I don't want to say that I know the next one, because we have an internal, organic process to determine what it is next," King said. "We don't have tennis, men's or women's, and those are on our radar. Men's baseball — we have a fine softball team, so adding men's baseball would be great. Our superintendent is interested in lacrosse and asked if we would do that. If we have students, and an opportunity in our conference? We would absolute consider it."

"We were going to have to have it at some point. The River States was going to require that at some point, not the NAIA. They were leaving it up to us as to when we wanted to do it. We plan to be provisional NAIA in the fall of 2021 and have full membership by the fall of 2022," Bradley said.

Before SMWC's announcement on Wednesday, the most recent school to add men's basketball was IU-Kokomo, which began play in 2011-12.