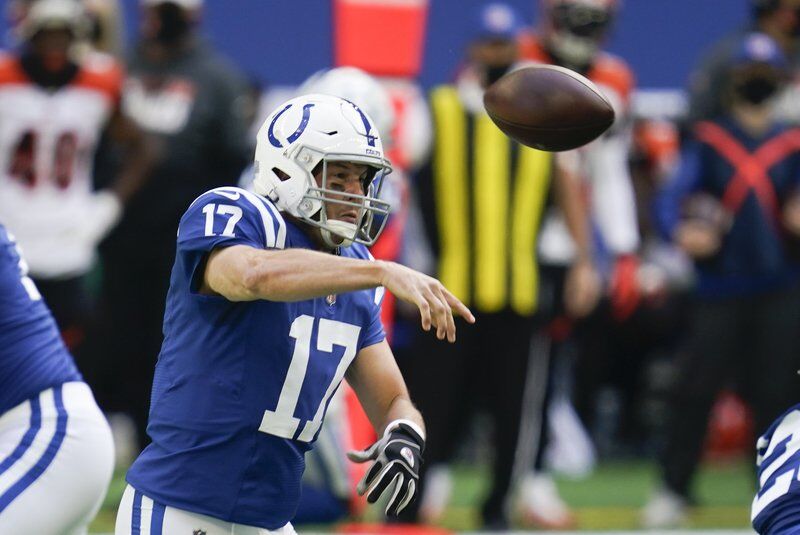 Quiets his critics: Colts quarterback Philip Rivers threw for a season-high 371 yards and three touchdowns against the Bengals on Sunday. 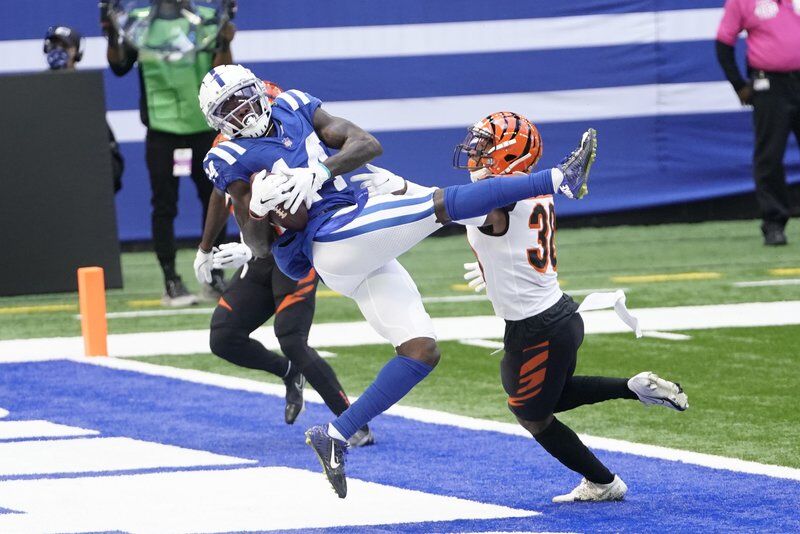 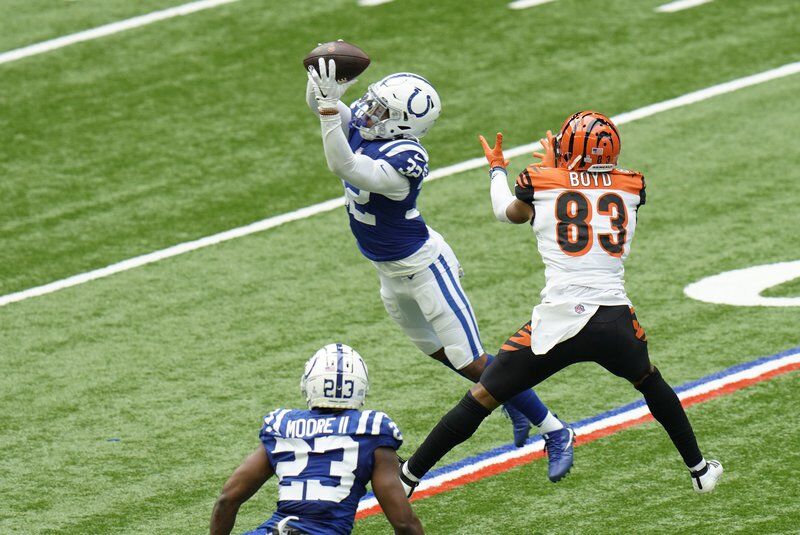 AP/AJ MastGame-sealing interception: The Colts’ Julian Blackmon intercepts a pass intended for the Bengals’ Tyler Boyd with 39 seconds left in the game. 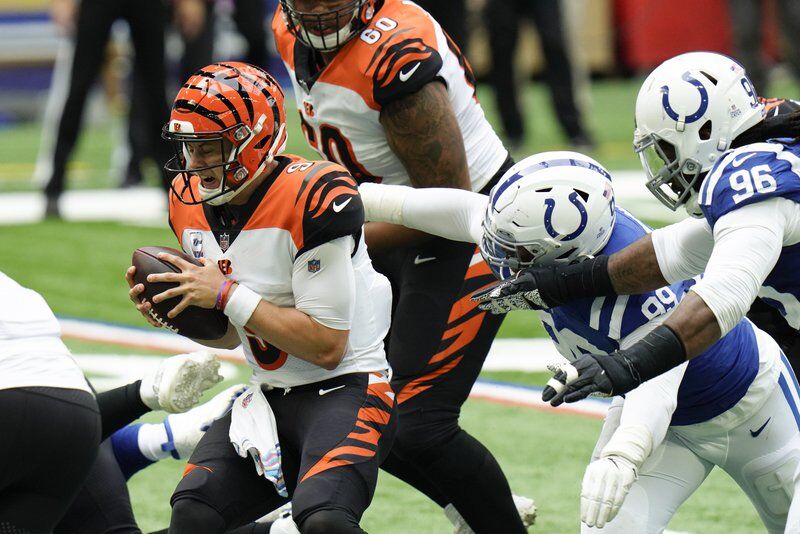 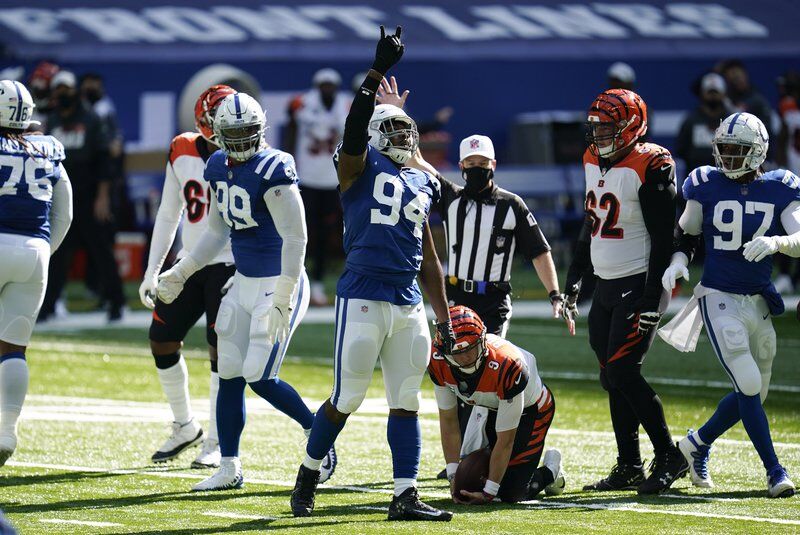 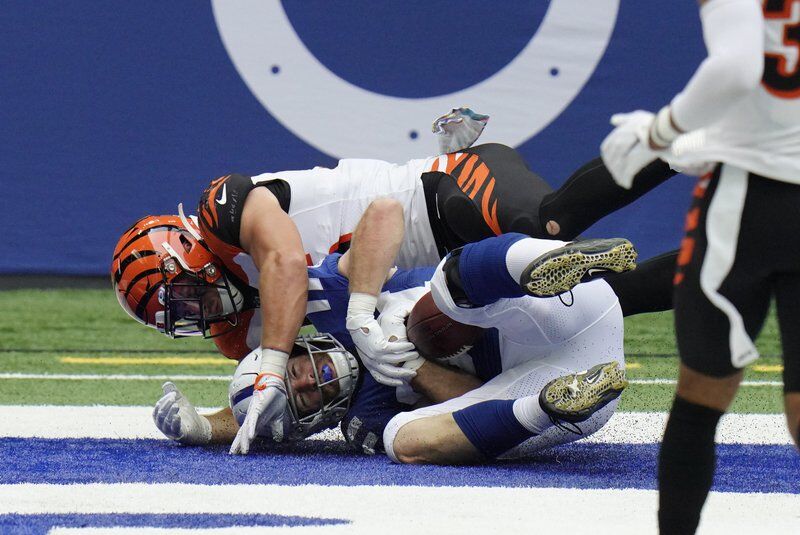 Quiets his critics: Colts quarterback Philip Rivers threw for a season-high 371 yards and three touchdowns against the Bengals on Sunday.

AP/AJ MastGame-sealing interception: The Colts’ Julian Blackmon intercepts a pass intended for the Bengals’ Tyler Boyd with 39 seconds left in the game.

Because of restrictions surrounding the spread of the coronavirus, he hasn’t had the chance to formally meet the local media yet.

So he wanted to see how everyone was reacting to his worst game of the season in a tough loss to the Cleveland Browns.

“I felt like all you guys are pretty dang honest,” Rivers said with a laugh.

He doesn’t plan to revisit those stories this week. Instead, he’ll be sitting at home in his native Alabama enjoying the bye.

That’s too bad because he’d probably enjoy this round much better.

On a day filled with redemption Sunday at Lucas Oil Stadium, Rivers threw for a season-high 371 yards and three touchdowns as the Indianapolis Colts rallied from a 21-point deficit to beat the Cincinnati Bengals 31-27.

The game served as a compelling rebuttal to the many critics who believe Rivers has lost his feel for the game and can no longer be effective. It was the biggest comeback for the Colts in the regular season since Peyton Manning helped erase a 35-14 deficit in the fourth quarter against the Tampa Bay Buccaneers on Oct. 6, 2003.

It was the biggest comeback for the team, period, since Andrew Luck led the way back from a 38-10 second-half deficit against the Kansas City Chiefs in an AFC wild card game on Jan. 4, 2014.

And it was the first signature moment for Rivers with the franchise after signing as a free agent in March.

The quarterback wasn’t the only player evening up the ledger Sunday.

The defense played a huge role in the early hole, giving up 194 yards of offense in the first quarter and allowing Cincinnati (1-4-1) to average 8.8 yards per snap. By the time running back Joe Mixon carried what seemed to be the entire unit into the end zone on a 7-yard touchdown run four seconds into the second quarter, it was 21-0 and it looked like the Bengals could name their score.

The defense surrendered just 197 yards the rest of the way, and the offense quickly climbed back into the game.

“We just can’t come out slow like that, and we can’t keep putting ourselves in a hole,” defensive tackle DeForest Buckner said. “It was a good thing the offense was clicking on all cylinders. We played great complementary football today, and we were able to dig ourselves out of that hole.”

The tide began to turn when Rivers hooked up with veteran wide receiver Marcus Johnson for a 55-yard gain that set up Trey Burton’s 1-yard touchdown run with 12:18 left in the first half.

After Cincinnati added a 47-yard field goal by Randy Bullock, Rivers found Burton for a 10-yard touchdown pass to pull within 10 points. The defense forced its first punt on the ensuing possession, and Zach Pascal made an acrobatic 17-yard touchdown catch with 15 seconds remaining to make it 24-21 at halftime and essentially reset the game.

Coach Frank Reich admitted the early deficit caused him to rethink the way he called the game. But so did Rivers’ hot hand.

“You don’t want to totally throw the game plan away but just kind of went to more of a pass emphasis, and Philip was in the zone,” Reich said. “You could feel it. You could see it, and I just felt like any pass we were going to call, he was going to find a way to get a completion and make plays. Just put it in his hands at that point.”

An early turnover by tight end Jack Doyle helped the Bengals surge into the lead.

After he lost a fumble without being hit in the open field on the second play from scrimmage, Cincinnati marched 43 yards to the end zone with a 2-yard run by Giovanni Bernard capping it off. Quarterback Joe Burrow – who was 25-of-39 for 313 yards – kept it himself for a 2-yard touchdown to make it 14-0 with 3:18 left in the opening quarter.

But after Mixon’s powerful touchdown run on the next series, the Bengals didn’t find the end zone again.

Bullock’s 55-yard field goal with 3:32 left in the third quarter provided the visitors’ lone score of the second half.

Doyle, fittingly, was the player who finally put Indianapolis (4-2) in front. His diving catch for a 14-yard touchdown and Rodrigo Blankenship’s extra point made it 28-27 with 14:55 remaining in the game.

“It was a big catch, a great catch,” Reich said. “You could just feel that Jack was going to make that play.”

Blankenship added a 40-yard field goal with 4:03 to play for the final margin, but there was still one big defensive stand to go.

Burrow – the reigning Heisman Trophy winner and No. 1 overall pick – drove the Bengals to midfield at the two-minute warning and picked up a fourth-and-9 with a 10-yard completion to A.J. Green 12 seconds later.

Then the drive stalled. Bernard gained 2 yards on first down, and Burrow threw a 2-yard pass to Tyler Boyd to bring up third-and-6.

Then rookie safety Julian Blackmon gave the defense its final retribution. Guessing Cincinnati would go back over the middle where it had been gaining yards all day, he stepped in front of Burrow’s pass and made the game-sealing interception at the 23-yard line with 39 seconds left.

That sent the Colts into the bye week with a winning record.

“I think that we’re a team that can handle adversity,” Blackmon said. “We’re a team that comes back from anything, going down 21-0 in the (first half) and then making the adjustments we made to get back, I’d say we’re a fighting team.”

TERRE HAUTE - William Carpenter Jr., 77, of West Terre Haute, passed away October 19, 2021 in his residence. He was born May 5, 1944 in Terre Haute to William Carpenter Sr., and Ella Grayless Carpenter. He worked in maintenance most of his life and was a race enthusiast, enjoying Indy and NA…