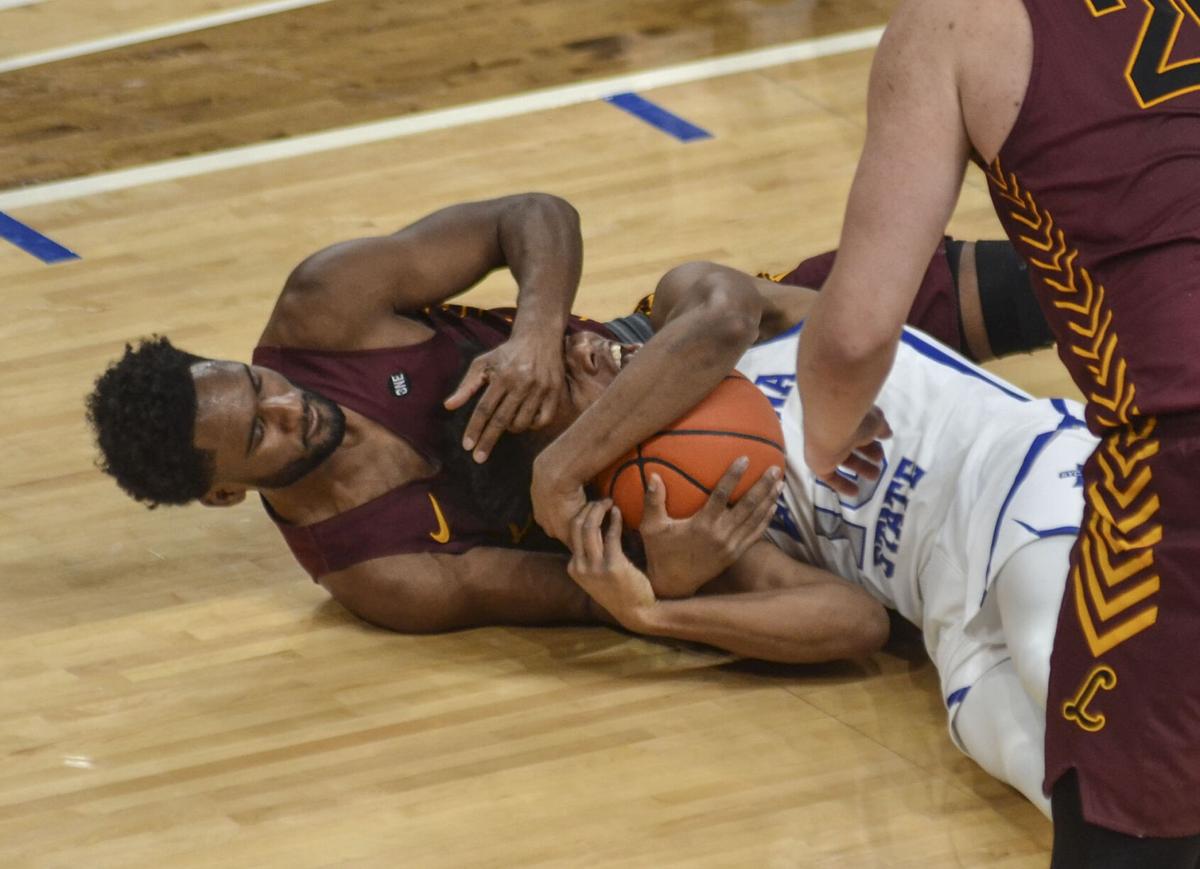 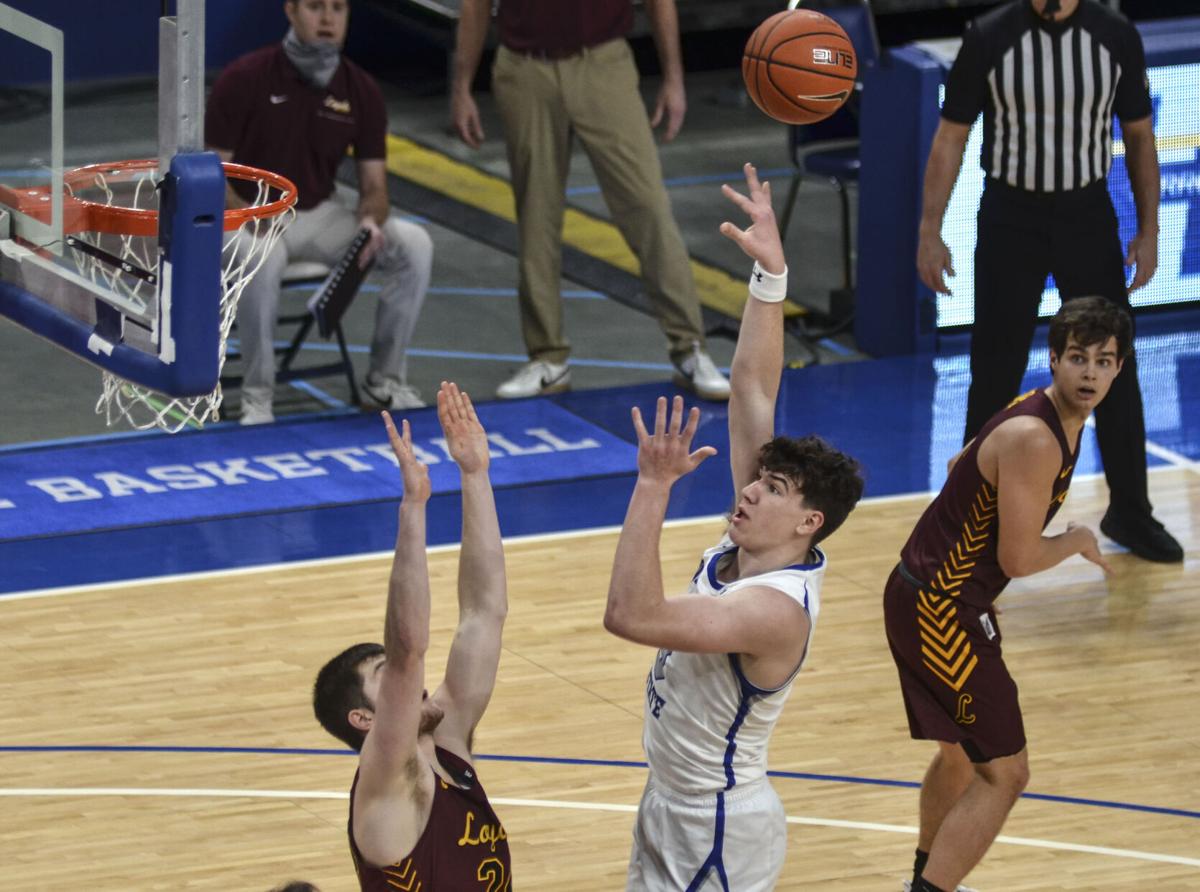 Tribune-Star/Austen Leake Post moves: Indiana State sophomore Jake LaRavia puts up a shot in the lane during Monday night’s game between the Sycamores and Loyola at Hulman Center. 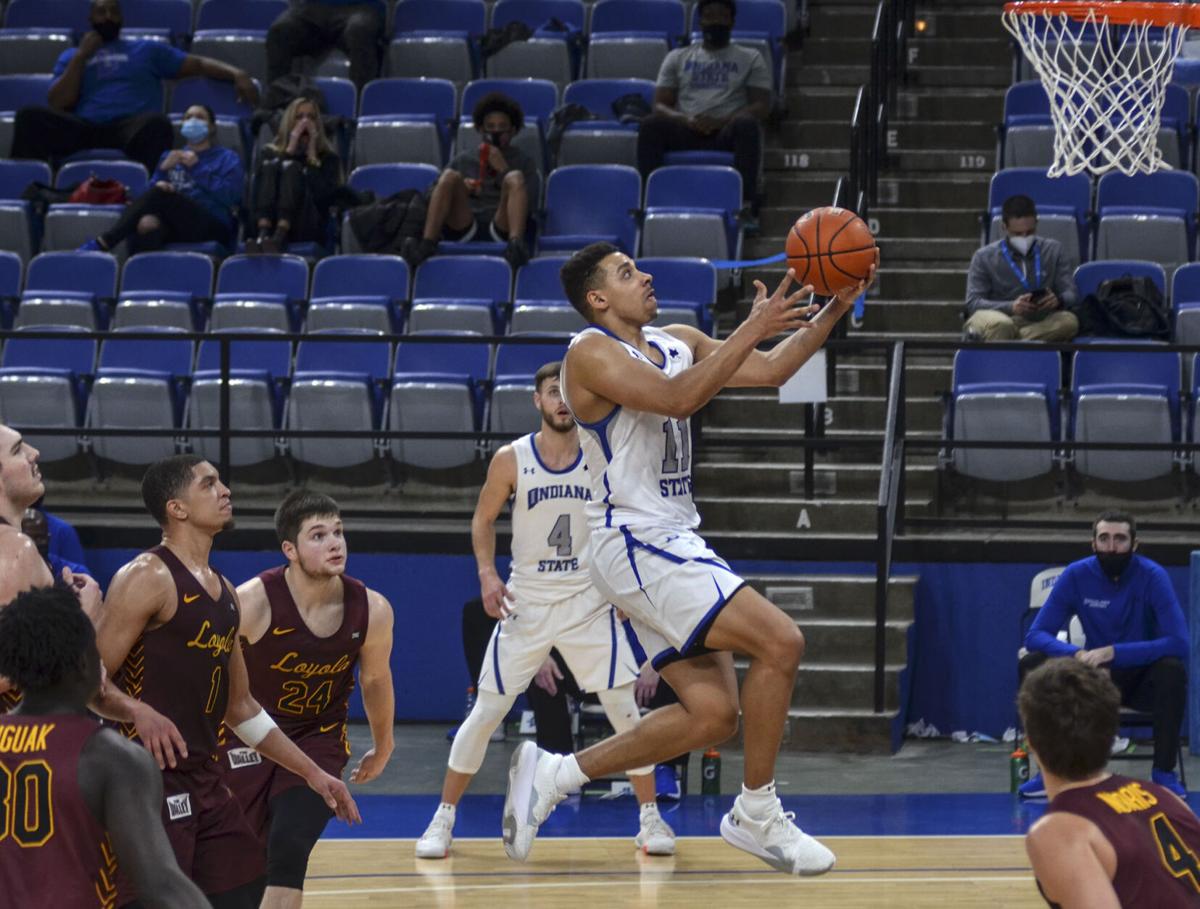 Tribune-Star/Austen Leake Too quick: Indiana State senior Tyreke Key blows by the Ramblers defense for a layup during Monday night’s game between the Sycamores and Loyola at Hulman Center. 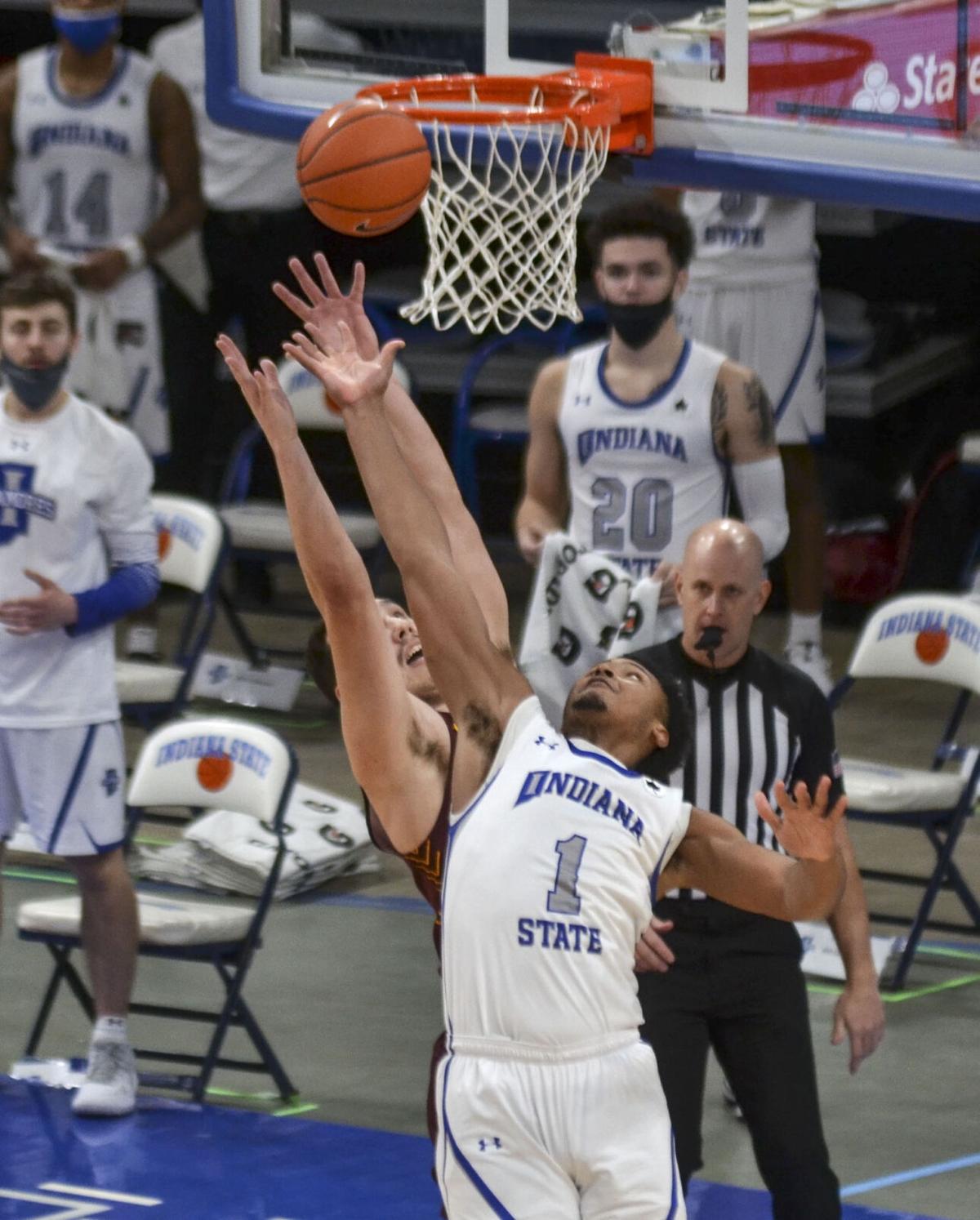 Tribune-Star/Austen Leake At the summit: Indiana State sophomore Tre Williams goes up to deflect a pass to the post on defense during Monday night’s game between the Sycamores and Loyola at Hulman Center.

Tribune-Star/Austen Leake Post moves: Indiana State sophomore Jake LaRavia puts up a shot in the lane during Monday night’s game between the Sycamores and Loyola at Hulman Center.

Tribune-Star/Austen Leake Too quick: Indiana State senior Tyreke Key blows by the Ramblers defense for a layup during Monday night’s game between the Sycamores and Loyola at Hulman Center.

Tribune-Star/Austen Leake At the summit: Indiana State sophomore Tre Williams goes up to deflect a pass to the post on defense during Monday night’s game between the Sycamores and Loyola at Hulman Center.

The defensive donnybrook between Indiana State and Loyola’s men’s basketball teams at Hulman Center on Monday is bound to leave a mark on both teams.

Unfortunately for the Sycamores, it will also put a “L” in the team’s record.

ISU’s offense dried up in the first half and the determined Ramblers ensured that the Sycamores would not find an oasis as Loyola clamped down for a 58-48 triumph to split the two-game series.

The game was played with impressive intensity, but also with non-existent flow. ISU didn’t respond well to the bruising battle, at least on the offensive end.

“I knew Loyola would come back aggressive and tough [after Sunday’s ISU win]. They were unbelievably physical and guarded as good as anybody I’ve seen. It was a tremendous defensive effort for them,” ISU coach Greg Lansing said.

Both Lansing and ISU guard Tyreke Key said that ISU’s offense at the end of the shot clock is what damaged the Sycamores the most.

“They got us into some mismatches at the end of the shot clock. It made it hard for anyone to get into a groove. They were just making tough plays, whether it was inside or outside. They were the tougher team tonight,” Key said.

Loyola coach Porter Moser said he challenged the Ramblers senior center Cameron Krutwig to have a better game than he did Sunday. Krutwig responded with 16 points, eight rebounds and two assists, but it was his defensive influence that was felt most. Krutwig patrolled the middle and kept ISU from getting any easy looks.

It was a difficult chore for the Sycamores.

“They’re a very good veteran, defensive team. They know how to play team defense, not individual defense. They’re always in gaps, they’re into their defensive principles and they did it well,” said ISU forward Jake LaRavia, who led ISU with 11 points.

The first half was spirited, but also resembled a game between two teams that had played the previous 24 hours. It was ragged and shots of any kind were hard to come by.

ISU created an early gap with a 9-0 run led by graduate transfers Randy Miller Jr. and Tobias Howard Jr. The Sycamores led 17-9 at the end of the rally and would live off the fat of that run for the rest of the half.

This was because the game turned into a defensive stalemate in which neither team could break through. ISU had opportunities to build its lead at the free throw line, but an abysmal 2 of 8 performance in the first half put the sword to that.

ISU’s shooting dried up too after the 7:59 mark as a Tre Williams bucket at that point would be the Sycamores’ last of the first half.

ISU’s defense was solid, though, and although Loyola ended the half on a 7-0 run, it spanned over three minutes of game play and the Ramblers’ halftime lead was just 27-24 even though ISU missed its last eight field goal attempts of the half.

There was no respite for ISU in the second half. The Ramblers pulled ahead 40-32 with 15:55 left via the only really meaningful run after halftime.

It proved to be enough. Though ISU’s defense remained strong and kept the Sycamores within range, the only time ISU strung together as many as three possessions in a row with points came with 6:01 left when a LaRavia 3-pointer and a layup was sandwiched around a Krutwig hook shot to make it 47-44.

ISU would not convert another field goal, however, until there was 51 seconds left in the game.

“Give Loyola all the credit. They were tremendous on that end and taught a lesson,” Lansing said.

Of the six MVC games ISU has played, there’s only one loss between the three teams. ISU next plays at weekend series at Illinois State starting on Saturday. On paper? It should be an easier matchup, but the Sycamores can’t rely on paper strength as they try to improve their MVC lot.

“If you want to stay in the Valley race? We have to improve. We need to win games. So we have to learn and get tougher,” Lansing said.