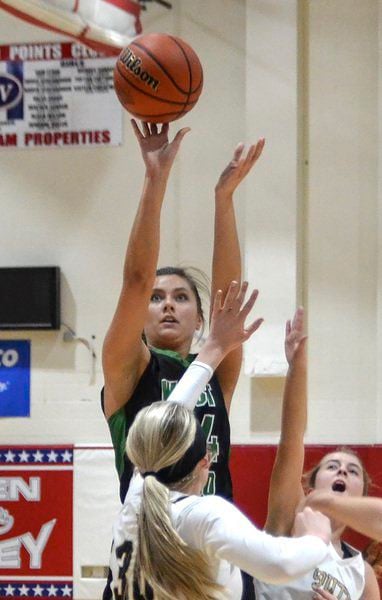 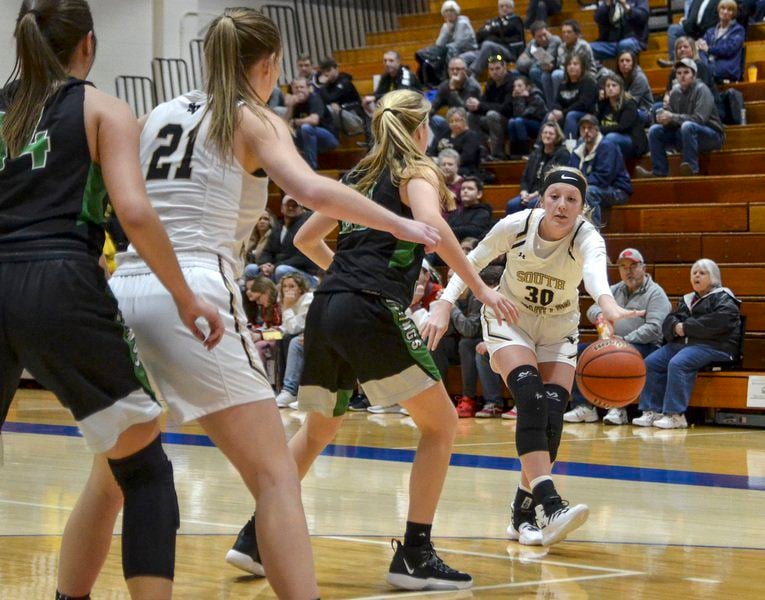 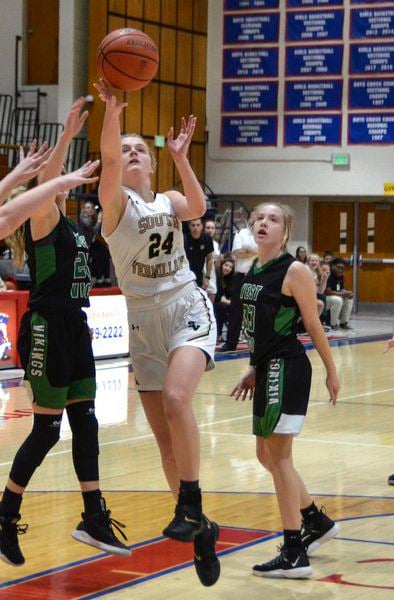 Tribune-Star/Austen Leake Down the lane: South Vermillion senior Mallory Hawkins splits the West Vigo defense for a layup attempt during Friday night’s sectional semifinal game between the Wildcats and the Vikings at Owen Valley. 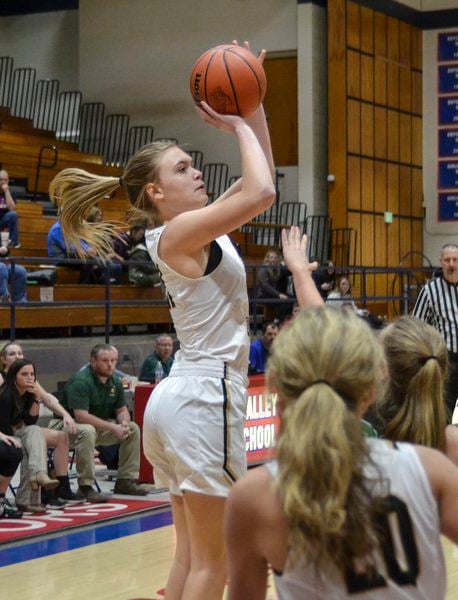 Tribune-Star/Austen LeakeDominant down low: South Vermillion senior Rebecca Berry puts up a shot during Friday night’s sectional semifinal game between the Wildcats and the West Vigo Vikings at Owen Valley. 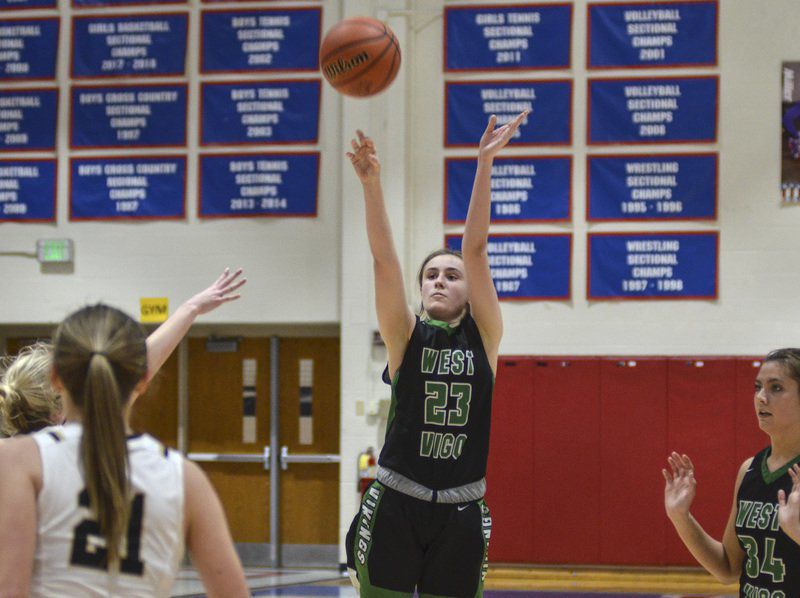 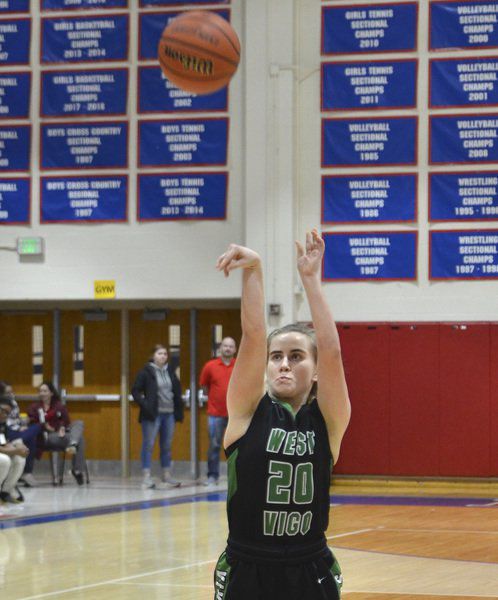 Tribune-Star/Austen Leake Down the lane: South Vermillion senior Mallory Hawkins splits the West Vigo defense for a layup attempt during Friday night’s sectional semifinal game between the Wildcats and the Vikings at Owen Valley.

Tribune-Star/Austen LeakeDominant down low: South Vermillion senior Rebecca Berry puts up a shot during Friday night’s sectional semifinal game between the Wildcats and the West Vigo Vikings at Owen Valley.

It was a girls high school basketball game that threatened to last forever, and a lot of the fans in attendance Friday night — exceptions being the folks from Brownstown and Edgewood waiting for the second game — probably wouldn’t have minded.

But Grace Likens got a piece of a potential game-winning shot in the final seconds of the second overtime, Adelynn Harris was fouled grabbing the rebound and Harris converted one of two free throws with 0:00.8 left — missing the second on purpose — as West Vigo beat South Vermillion 45-44 to advance to tonight’s championship game of the Class 3A Owen Valley Sectional.

It all came down to the FT line and @WVHSathletics sophomore Adelynn Harris put the Vikings up for good. 45-44 2OT victory over South Vermillion pic.twitter.com/7IIZsn0AdM

The Vikings avenged a six-point loss back on Dec. 3 and looked ready to do so easily for two quarters.

But the Wildcats battled back from a 10-point halftime deficit to take a 33-30 lead early in the fourth quarter, and then both teams showed their grit and resilience — if not their best shooting touches — the rest of the way.

“We’ve been working all year for this,” said coach Jon Kirchoff of the Vikings. “Good things, you have to work for. We followed the scouting report . . . and we talked about adversity all week. We came out and did our job.”

“You know it’s going to happen at some point,” said a damp-eyed coach Scott Jones of the Wildcats, “when you’ve got to look high school kids in the eye and tell them that they can’t play anymore. It hurts that we had to do it sooner than we expected.”

West Vigo had three double-figure scorers and South Vermillion had big games from their senior stars Rebecca Berry and Mallory Hawkins, but three of the most influential players in the game combined for just nine points.

West Vigo twins Ellie and Maci Easton took turns guarding Hawkins, who didn’t have many easy looks and was erased when the Vikings took their early lead, and South Vermillion’s Jenna Myers held West Vigo’s Kylee Stepp to just one point — a free throw after a defensive rebound — in the second half and overtime as the Wildcats rallied.

“One of the best players in the Wabash Valley was not in [the Vikings’] offense,” Jones agreed when Myers’ contributions were mentioned, “and Maci and Ellie made Mallory work; if [Hawkins] doesn’t have to work so hard in the first half, that might have been the difference.”

Hawkins and Berry were both scoreless in the first quarter as West Vigo took a 14-4 lead. Stepp hit a pair of 3-pointers and also had two steals, a block and an assist.

Hawkins worked her way free for a pair of 3-pointers of her own in the second quarter, but the Vikings still led by 10 at halftime, 24-14.

Berry turned into a complementary piece for the Wildcats — 17 points, 14 rebounds after halftime — and Myers did her defensive work as South Vermillion started to get closer. The Wildcats got the last basket of the third quarter and the first six points of the fourth to go ahead 33-30.

Then those talks about adversity must have kicked in. West Vigo tied the score on two free throws by Ellie Easton and one by Stepp, and neither team led by more than two points the rest of the way.

Berry led all scorers and rebounders with 18 points and 19 boards, while Hawkins scored 15 — including the two free throws with 19 seconds left that forced the first overtime.

Likens had two rebound baskets for four of her team’s five points in the second overtime, and also blocked six shots including the one at the end.

And, despite battling Berry most of the game, was around in the final seconds to do those things.

“That was my one goal,” Likens said with a laugh when asked about not fouling out (for a change). “I’m so happy and so thrilled to be on a team that works together like this. This builds our spirits. We came together really good to be here now.”

“Give West Vigo credit,” said Jones. “They’ve improved so much since the last time we played them and that’s a tribute to coach Kirchoff and his staff and the young ladies.”

“[The Vikings] put in the work and they got rewarded for it,” Kirchoff concluded.