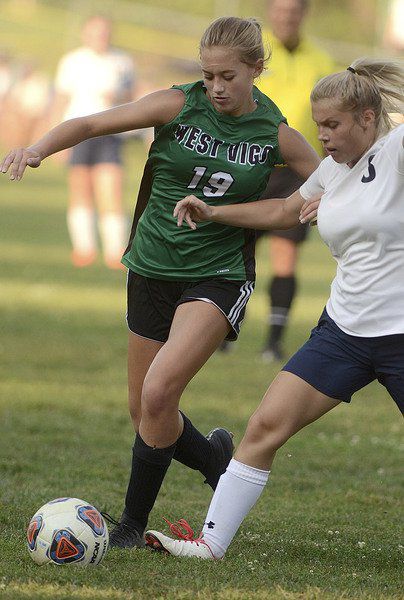 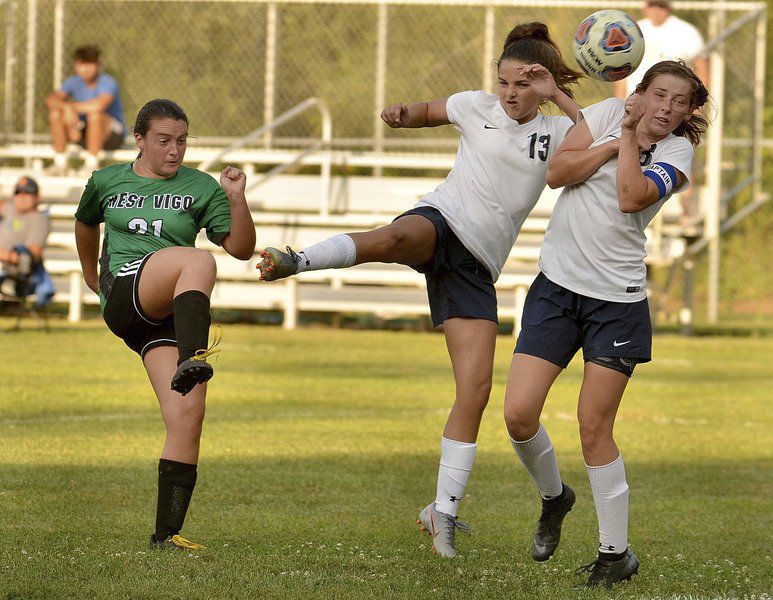 When a late goal was put into the back of the net by Sullivan’s Kathleen Ming in last year’s sectional opener, several emotions went through the mind of West Vigo High School girls soccer coach Alicia Lanham.

It ended her team’s season, which is never easy. But it also gave her plenty of excitement for what could possibly take place this season with 10 of the Vikings’ 11 starters returning.

Her excitement was more than warranted with the way West Vigo has started the 2019 campaign, posting a 6-1-1 record through the first eight games, which included a 5-1 win over North Putnam on Tuesday night.

It’s the best eight-game start to a season in West Terre Haute since 2000, a team Lanham just so happened to be a member of.

“I knew with all of those girls returning, I knew this could be our year. And then when we came out in the summer, and all of these girls have put in so much work, I was just like, ‘this is going to be our year,’” Lanham said.

What’s made the Vikings so good?

The cohesiveness of the returnees are a big reason why, but Lanham said it also has to do with having a high-caliber player at each position that has also played together for several years.

Plus there are Tori Buchanan (four goals), Emma Stevens (four), Abby Scott (three) and Annalyse Dooley (one), which forces opposing teams to not pay all of their attention on just one player.

West Vigo scored an average of 3.71 goals per game going into Tuesday’s game with North Putnam, and that only went up after five more found the back of the net.

The defense, made up of a combination of Molly Rohrbach, Kaitlyn Ray, Elizabeth Vinardi, Gabby Buckallew, Mary Paige Mason, Katelyn Rollings and Kilee Matherly, has been quite stellar too, Lanham said, despite going under the radar a bit.

Goalkeeper Avery Funk, who added eight more saves to her season tally, as well as the defense in front of her, has allowed just 2.14 goals per game entering Tuesday, and like the offense, saw its average move in the right direction as well.

“They don’t get the credit they deserve,” Lanham said of the defense. “They do a good job of getting the ball and putting it out of the pressure of our goalie and putting into the offensive half.”

Prior to Tuesday’s win over the Cougars was quite possibly the most exciting weekend the Vikings have had in several years.

For the third straight season, West Vigo took part in the Hoosier Cup in Bloomington.

It hadn’t gone as planned the first two trips, as the Vikings came back 0-3 in each. But this year was different.

On Friday, West Vigo defeated Martinsville 2-1 on goals by DeGroote and Stevens. But Saturday’s morning game was when it became apparent the Vikings had a chance to do something special.

Trailing 3-0 with six minutes remaining in the game, Buchanan scored twice and DeGroote added another goal in the final minute to tie Scottsburg.

DeGroote scored three more goals to defeat Washington 3-2 later Saturday to win their division of the Hoosier Cup and cap quite the 48-hour span of soccer.

“It was awesome, it was seriously awesome,” Lanham said of the Hoosier Cup performances.

The most impressive part? The Vikings were without Scott, who went down with a knee injury last Tuesday and is hoping to get good news from her MRI results in the coming days. It’s forced others to step up in her absence.

“I think a lot of them are trying to do their absolute best because they know Abby can’t play right now,” Lanham said.

West Vigo has gone undefeated since Scott was injured, so the possibility of getting her back down the stretch makes them even more dangerous come postseason time. But for now, Lanham wants her team to take everything day-by-day and continue to build upon the start that’s caught the attention of many around the state.

“I feel confident [in her team], but I’m also telling them they have to do it. I know their potential, but they’re going to have to go out there and do what they know how to do,” she said.