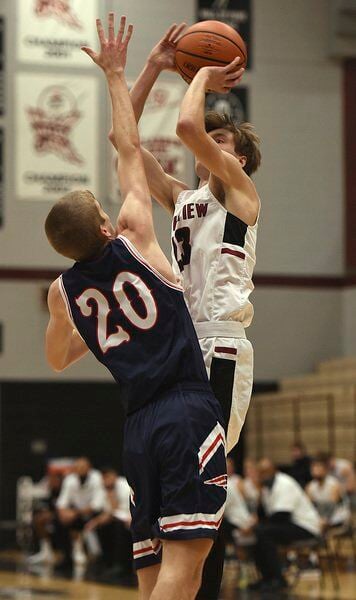 Tribune-Star/Joseph C. Garza A good shooting night: Northview’s Ethan DeHart shoots over Terre Haute North’s Mark Hankins for two of his 17 points during the Knights’ 55-52 win on Tuesday in Brazil. 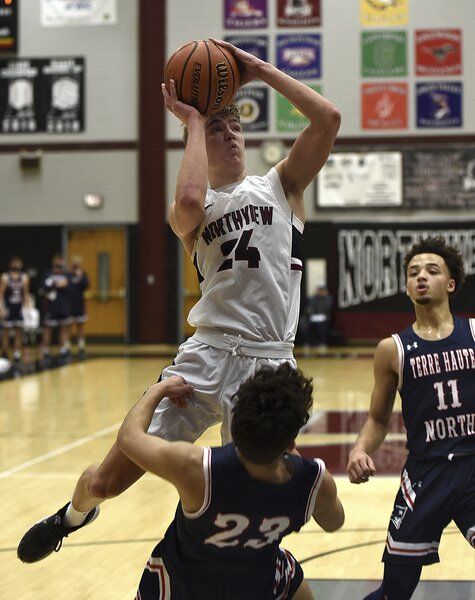 Winner, winner: Northview’s Jacob Fowler is fouled as he puts up the shot in what turned into a three-point play and the game-winning points to give the Knights a 55-52 win over Terre Haute North on Tuesday in Brazil. Those were the only three points he scored all night.Tribune-Star/Joseph C. Garza

Tribune-Star/Joseph C. Garza A good shooting night: Northview’s Ethan DeHart shoots over Terre Haute North’s Mark Hankins for two of his 17 points during the Knights’ 55-52 win on Tuesday in Brazil.

Winner, winner: Northview’s Jacob Fowler is fouled as he puts up the shot in what turned into a three-point play and the game-winning points to give the Knights a 55-52 win over Terre Haute North on Tuesday in Brazil. Those were the only three points he scored all night.Tribune-Star/Joseph C. Garza

The parallels to their previous games were interesting for both Northview and visiting Terre Haute North in nonconference high school basketball Tuesday night.

For Northview, a big third-quarter run provided a lot of the difference, although this time in the Knights’ favor; their 15-2 run Tuesday night was helpful in their eventual 55-52 win over the Patriots (after a 14-0 Sullivan run led to defeat on Saturday).

For North, their two top defenders, Mahki Johnson and Bryson Carpenter, had a big effect on the production of Northview seniors Caleb Swearingen and Brevin Cooper, much like they had against Terre Haute South’s top scorers on Friday.

One thing that wasn’t parallel was the performance of Northview junior Ethan DeHart. Held scoreless at Sullivan in that 58-57 loss, he bounced back with a game-high 17 points.

But the crucial thing that stayed the same was the accuracy of Northview junior center Jacob Fowler. Fowler didn’t miss a shot in either game, and his three-point play with 7.3 seconds left — his only shot and free throw in the game — provided the difference. North had time to set up a game-ending play that got Matt Gauer wide open for a 3-point shot for the tie, but there’s a reason extra points are awarded for shots that far from the basket.

“We put ourselves in that position where we had to do that [attempt a 3-pointer for a tie],” coach Todd Woelfle of the Patriots said afterward. “We were very undisciplined all night, at both ends of the floor . . . we didn’t value possessions in a possession-by-possession game, and that’s why we got beat.”

“I’m extremely proud of how we hung in and grinded it out,” said coach Michael Byrum of the Knights. “We knew it would be a sectional-type game, possession by possession.”

Although there were seven ties and four lead changes, each team had spurts of dominance, starting with North’s 13-2 early run that brought the Patriots from a 10-4 deficit into a 17-12 lead early in the second quarter.

North got 3-pointers from Johnson and Noah Crosley to close out the half ahead 26-22, and got another from Mark Hankins to start the third quarter.

Then the Knights went to work. DeHart had three baskets without a miss, Cooper had a basket and a 3-pointer and Swearingen had a basket and two assists and the home team was ahead 37-31. “We lost track of [DeHart] there for awhile,” Woelfle said after the game.

North’s turn. Sparked by back-to-back steals by Nas McNeal, the Patriots got back within 39-38 at the third stop and opened the fourth quarter with two free throws by Johnson and a basket by McNeal.

Your serve, Knights. Cooper took a handoff from DeHart and drove for a tying three-point play, DeHart hit a tie-breaking basket and Drew Cook a 3-pointer. Now Northview led by five at 47-42, and it was 50-45 with a little over two minutes left.

A clutch 3-pointer by Johnson and two free throws by Carpenter tied the score at 50. Johnson forced Swearingen into a difficult shot, but the rebound bounced back to Swearingen, who hit two free throws with 1:18 left. A driving layup by Hankins tied the game for the last time with 1:01 remaining, and Byrum called a timeout to play for a late shot.

As the clock ticked down, the Patriots swarmed Swearingen, and he found Fowler — his fifth assist of the game — for the game-winning play.

“Give Northview credit. They made big plays when they needed to,” Woelfle said.

DeHart’s 17 points was complemented by 11 each from Swearingen and Cooper and 10 from Cook. Cooper did lead all rebounders with eight from his point guard spot.

“Defensively we weren’t bad,” Woelfle admitted when the work on Swearingen and Cooper was referenced.

“After going scoreless [at Sullivan], I wanted to go out and play hard and see what I could do,” DeHart said. “Get back on track.”

“Ethan and Drew are capable of having good games,” Byrum pointed out, “and they stepped up and hit shots they’re capable of hitting.”

Johnson led North with 12 points and Gauer had 11. “Offensively, our decision-making was not good,” Woelfle said.

Next — Both teams have home games Friday, Terre Haute North (6-7) against Clay City and Northview (6-4) against Indian Creek.