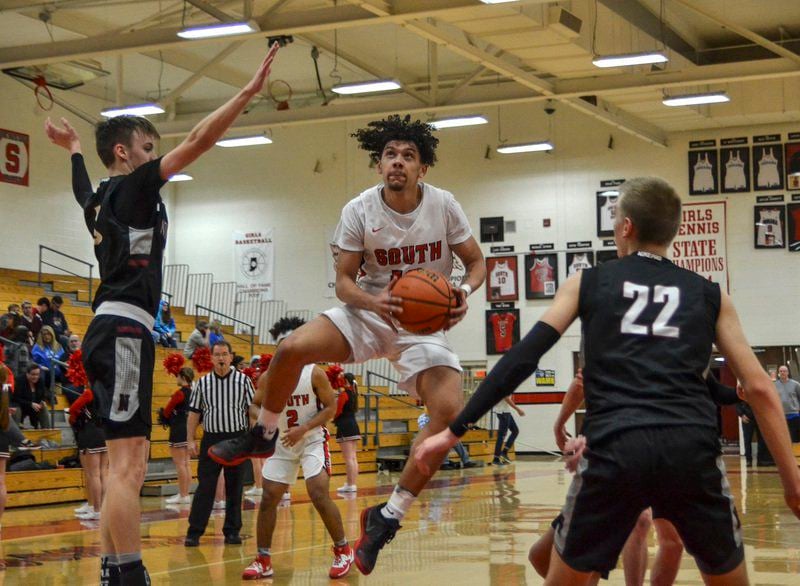 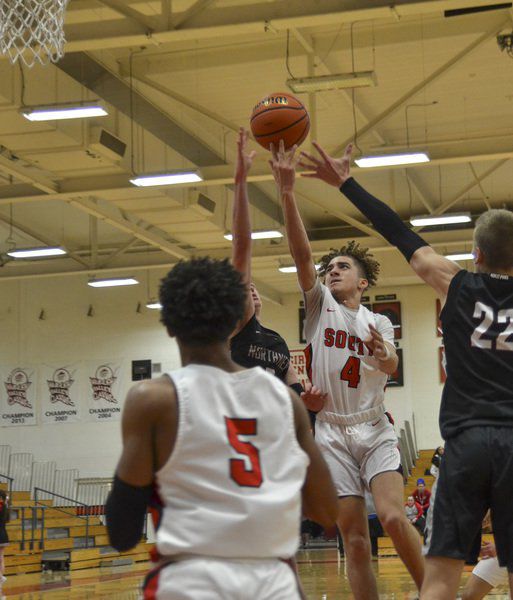 To the hoop: Terre Haute South’s Amaryiae Wilson cuts through the lane during Thursday’s game against Northview at South. 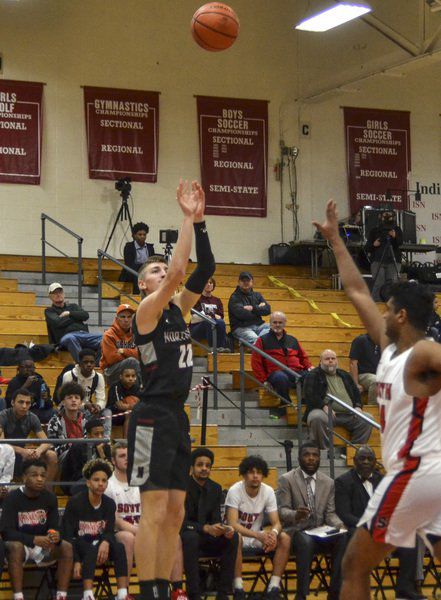 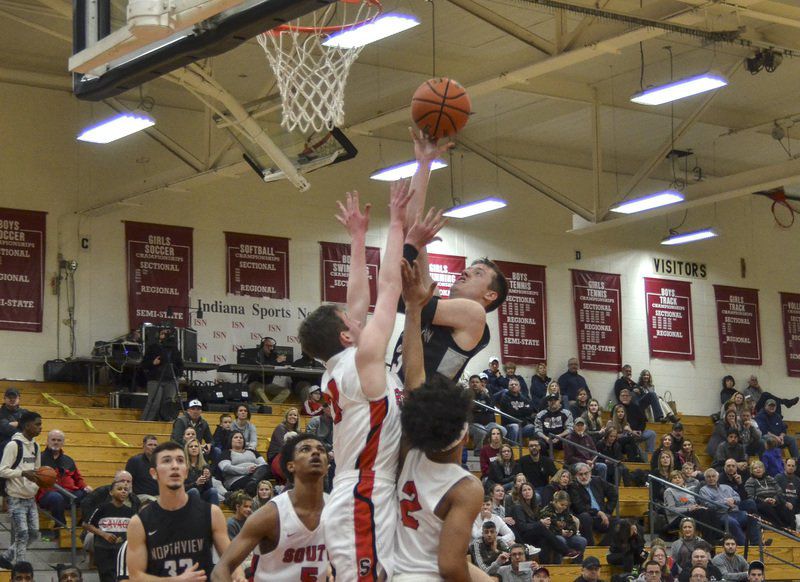 Over the top: Northview senior Cade Bryan scores in the lane during Thursday’s game against Terre Haute South at South. 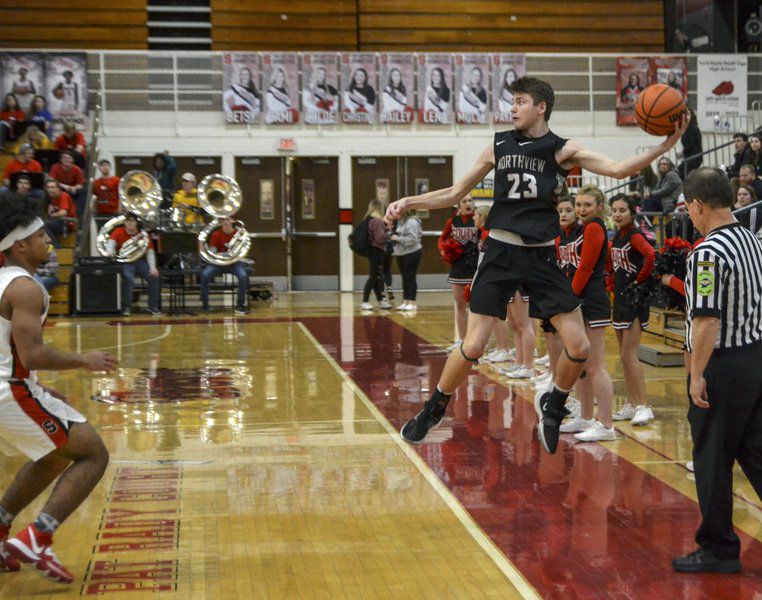 Heroic effort: Northview sophomore Ethan DeHart saves a ball from going out of bounds in a game against Terre Haute South on Thursday at South.

To the hoop: Terre Haute South’s Amaryiae Wilson cuts through the lane during Thursday’s game against Northview at South.

Over the top: Northview senior Cade Bryan scores in the lane during Thursday’s game against Terre Haute South at South.

Heroic effort: Northview sophomore Ethan DeHart saves a ball from going out of bounds in a game against Terre Haute South on Thursday at South.

The Braves had endured eight losses in a row, the last win was against Casey in the Classic, and almost all of them came against teams that will be making noise in the state tournament.

So when South clinched a come-from-behind 52-49 victory over Northview on Thursday? There was elation and a sense of relief that the hard times were over.

“It was a brutal, brutal January, but you know what? But I think our January made our win that much more special and made us that much better,” South coach Maynard Lewis said.

“We played against Brownsburg and Bloomington South and we learned what we had to do. We had to play four quarters.”

South trailed 44-39 with 3:54 left in the game, but outscored the Knights 12-5 down the stretch. Cordell Hanes, who led the Braves with 15 points, played a key role as he scored nine points during South’s stretch.

“It feels really great. We haven’t won since before Christmas break,” Hanes said. “We’ve been working on taking our time, passing the ball more, and listening to details.”

For Northview, the game was a chance to sweep the Vigo County schools for the first time in the 21st Century. The Knights came close, but couldn’t combine the bucket and stop they needed to pull through. Caleb Swearingen led the Knights with 17 points, but Northview’s offense dried up in the final period.

“We missed a few shots when we needed to hit them. There was a couple of plays we needed to make to push us ahead and we didn’t get them. They did a great job capitalizing on some errors defensively and they hit the shot,” Northview coach Michael Byrum said.

Northview (12-6) came out of the gate hottest. The Knights took an early 10-2 lead as South (7-12) had trouble getting its bearings on both ends of the floor. The Braves had six first-quarter turnovers, most of them early in the period.

But South settled down, attacked Northview’s packline defense with a bit more efficiency, and drained their shots. A buzzer-beating 3-pointer by Jaden Thomas helped South cut its deficit to 15-13 by the end of the first quarter.

When both teams could avoid turnovers, both were able to finish well, but avoiding turnovers was difficult. Northview got hit by the bug more so in the second quarter and it gave South the window to briefly take the lead. The teams hadn’t separated themselves by halftime as the game was tied at 27.

The second half was more defensive-oriented. Neither team led by more than a possession throughout the third quarter. Northview finally broke through to take a 41-36 lead via a pair of Carson Gettle free throws early in the fourth quarter.

Northview had a 44-39 advantage when South began its run. Hanes hit a 3-pointer with 3:24 to cut Northview’s lead to two. South had answered both of Northview’s five-point leads with 3-point makes in the fourth quarter.

“This was a night where we didn’t shoot the ball as well as we normally do. When don’t shoot well? You have to find ways to put yourself in a position to win. We were in some of those situations, we just didn’t make a couple of plays we needed,” Byrum said.

Hanes tied the game at 3:06 and an Amariyae Wilson layup with 2:18 left put the Braves in front briefly. Gettle drained a 3-pointer with two minutes left to give Northview its final lead at 47-46.

Northview’s Cade Bryan and Hanes traded free throws in the waning seconds. Northview’s final 3-point shot to try to force overtime fell short and South’s bench erupted as their eight-game nightmare was over. South only had one turnover in the fourth quarter and Northview only made one field goal in the final period.

“We played defense when we had to. Offensively? We really moved the ball well. We played as a team, we fed the most, and we were able to execute. I can’t be prouder of the kids. The resilience and hard work they put in is what Terre Haute South basketball is all about. For the most part? We stayed together, we came and we learned. We wanted to get better and we were fun to watch,” Lewis said.

Next - TH South (7-12) plays at Plainfield and Northview (12-6) plays at Bloomfield on Saturday afternoon.