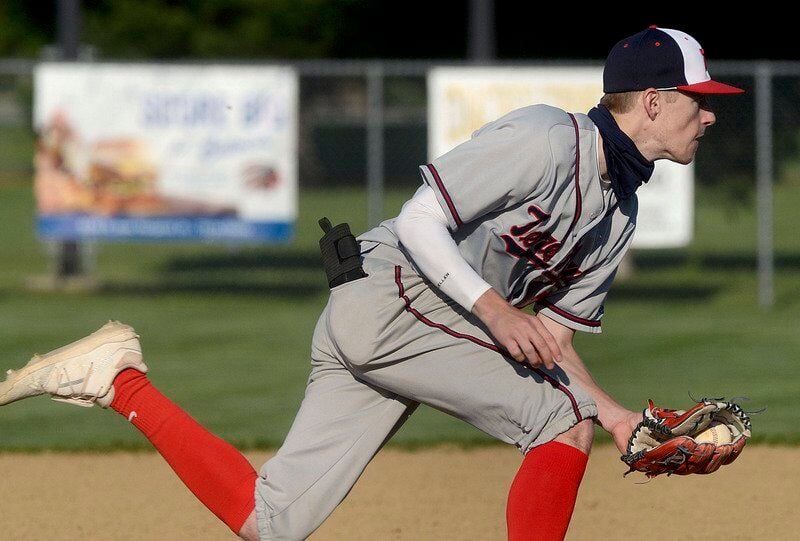 All over it: Terre Haute North's Cade Moore scoops up a groundball to throw out a South batter at first base during the Patriots' 8-5 win Friday at South. 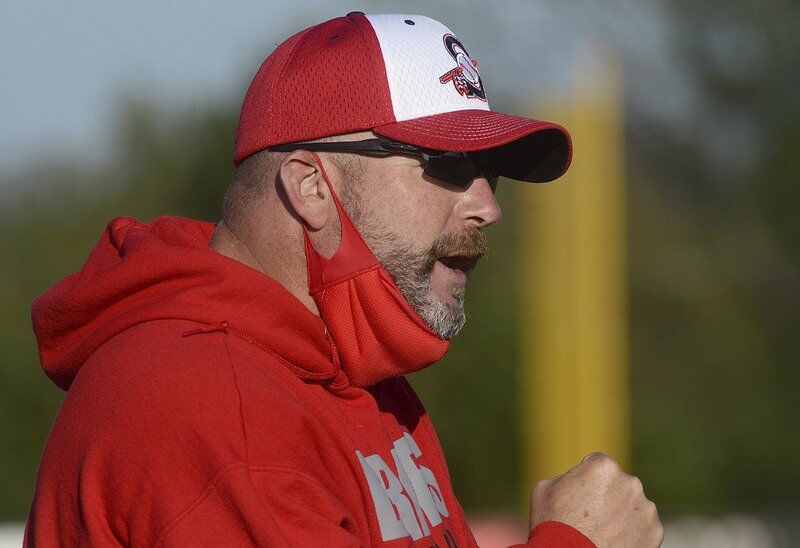 Tribune-Star/Joseph C. Garza Encouragement: Terre Haute South head coach Kyle Kraemer encourages one of his players at bat during the Braves' game against North on Friday at South. 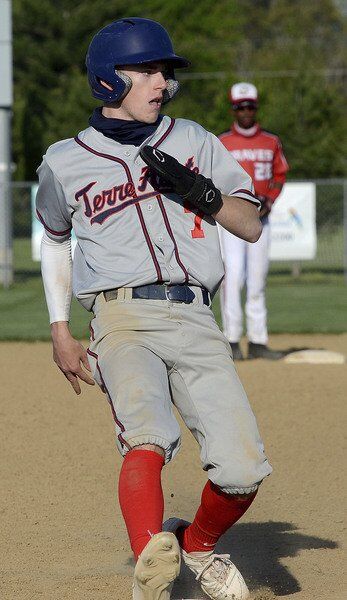 Tribune-Star/Joseph C. Garza Eyes on the prize: Terre Haute North's Cade Moore makes his way to third base during the Patriots' 8-5 win over the host South Braves on Friday. 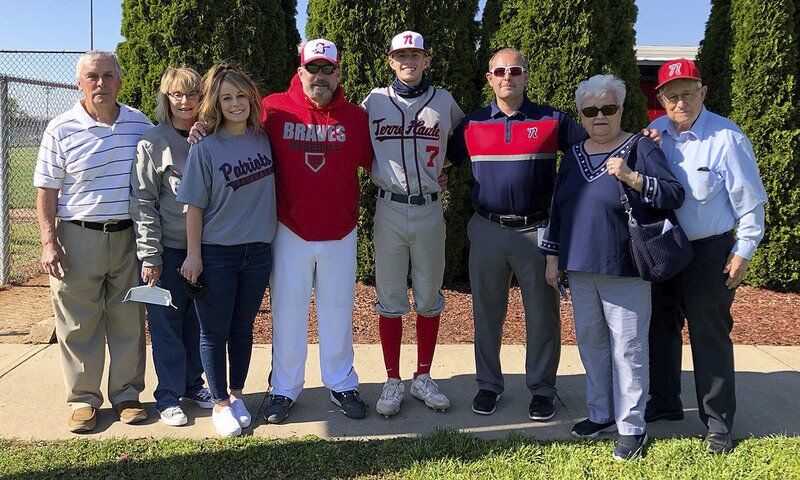 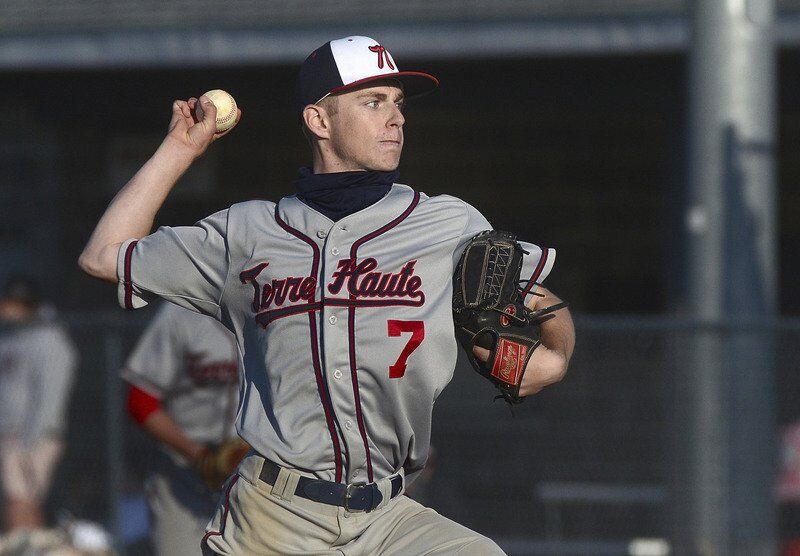 All over it: Terre Haute North's Cade Moore scoops up a groundball to throw out a South batter at first base during the Patriots' 8-5 win Friday at South.

Tribune-Star/Joseph C. Garza Encouragement: Terre Haute South head coach Kyle Kraemer encourages one of his players at bat during the Braves' game against North on Friday at South.

Tribune-Star/Joseph C. Garza Eyes on the prize: Terre Haute North's Cade Moore makes his way to third base during the Patriots' 8-5 win over the host South Braves on Friday.

The Patriots' senior shortstop had a big two-out hit to drive in two runs and was the winning pitcher in relief, and he wouldn't mind the same outcome when the two teams play their rematch at 6 p.m. this Friday at North.

"Both sides competed," he said earlier this week. "[The Braves] hit the ball throughout their lineup. We had to answer, and we did."

Win or lose this week, however, Moore has the luxury of knowing he will have a substantial cheering section — and with both sides of town represented.

Scott Moore is the son of Steve Moore, an assistant coach and eventual successor to the legendary coach Don Jennings at North. Steve Moore coached Scott when his son was a Patriot.

But, as the game-show announcer might say, that's not all.

Amanda Moore is Scott's wife and Cade's mother. She is also the sister of South coach Kyle Kraemer, which sets up an interesting scenario for one set of grandparents.

"Fifty years of baseball games," said Kelly Dumas, who is the mother of Kyle and Amanda, "and this is the first time we've rooted for North — ever."

"Right now I'm rooting for North," said Amanda Moore, who described herself as the little sister under the bleachers when her brother was playing, "but I've always rooted for South prior to Cade."

Cade Moore has had a season worth rooting for in his final season with the Patriots.

"He's our leadoff hitter, and he sets the tone for us offensively," said North coach Scott Lawson. "He does a good job of putting the ball in play and being kind of a nuisance . . . and when he gets on base he can cause some problems.

"He's a competitive kid, and he's done a pretty good job [for not playing since 2019, since there was no high school or American Legion baseball last spring and summer]," Lawson continued. "He's put effort into getting stronger, and it shows on the field."

"It certainly has been fun watching his growth and success on the tennis court and the baseball field," Kraemer said. "I thought he showed tremendous senior leadership last Friday."

"He's somebody that really wanted to learn the game," said Steve Moore. "This year he's worked so hard to learn hitting, and I've seen him take a pitch to get one he wants.

"He's the top Moore player," Steve Moore continued. "Grandpa just sits back. It's a pleasure to watch him play."

Some of the instruction the youngest Moore has received has come from his uncle.

"Kyle has always been generous enough to coach Cade on hitting," Amanda Moore said. "When Kyle has his lessons, he lets us know that he's put Cade on the schedule."

"Since I was 7 I've been hitting with him," Cade Moore said.

Some of those sessions probably came in the last two years, between Cade's sophomore year as an occasional starter for both North and Wayne Newton and this spring.

"I went to a handful of showcases," Cade said in describing what he did last summer without a team to play for. "I hit on my own and I threw on my own . . . and I put on about 20 pounds."

At 5-foot-11 and 155 pounds, Cade Moore can still not be described as "burly," but he's getting noticeably stronger.

"He wouldn't be as successful as he has been or will be if it wasn't for his work ethic," Kraemer said. "As good as he is now, I think his better days are ahead of him, when he can consistently get in the weight room and add some mass to his frame."

That will be at Kentucky Wesleyan, and Steve and Diane Moore and Bob and Kelly Dumas probably already know the best way to get to Owensboro.

"We hate to see Cade move on," said Kelly Dumas. "Now we have nobody [to root for as a high school player] . . . but we'll end up wherever he goes."

Including Don Jennings Field this Friday, of course.

"It's very exciting, seeing my uncle coaching [on the other side of the field] and having both [sets of] my grandparents there, with my mother's side [of the family] supporting both North and South," Cade said.

"He's an outstanding young man. Great in the classroom and great around people," said Steve Moore.