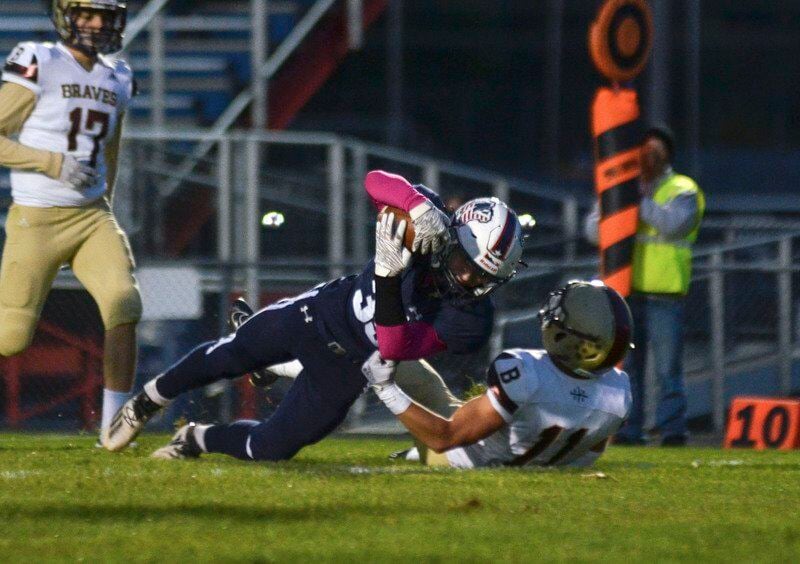 Tribune-Star/Austen LeakeOver the line: Terre Haute North senior Conner Lutz scores on a pass during Friday night’s game between the Patriots and Brebeuf at North. 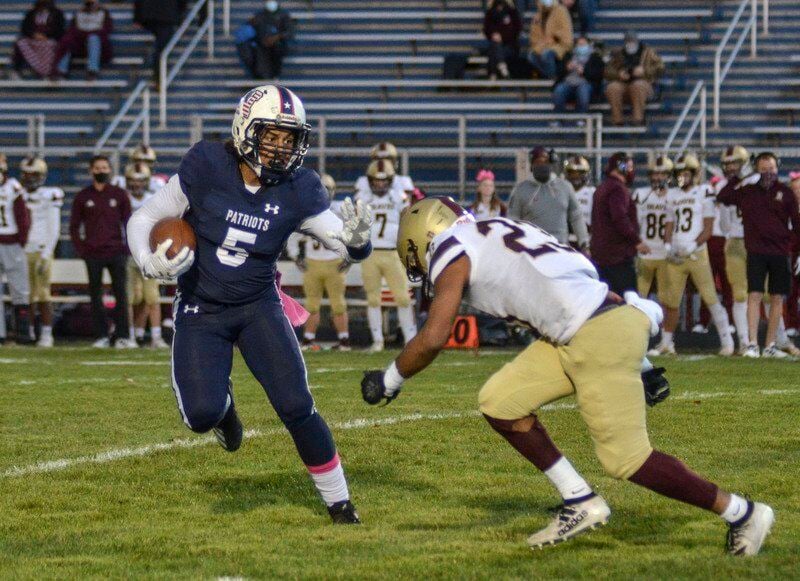 Tribune-Star/Austen Leake Fighting him off: Terre Haute North junior Donavin Cherry fends off a tackler during Friday night’s game between the Patriots and Brebeuf at North. 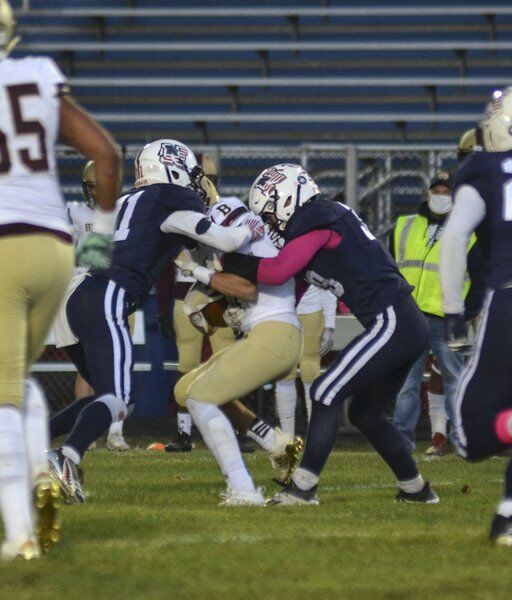 Tribune-Star/Austen Leake Got him: Terre Haute North defenders Deven Stillwell (left) and Conner Lutz (right) bring down the runner during Friday night’s game between the Patriots and Brebeuf at North. 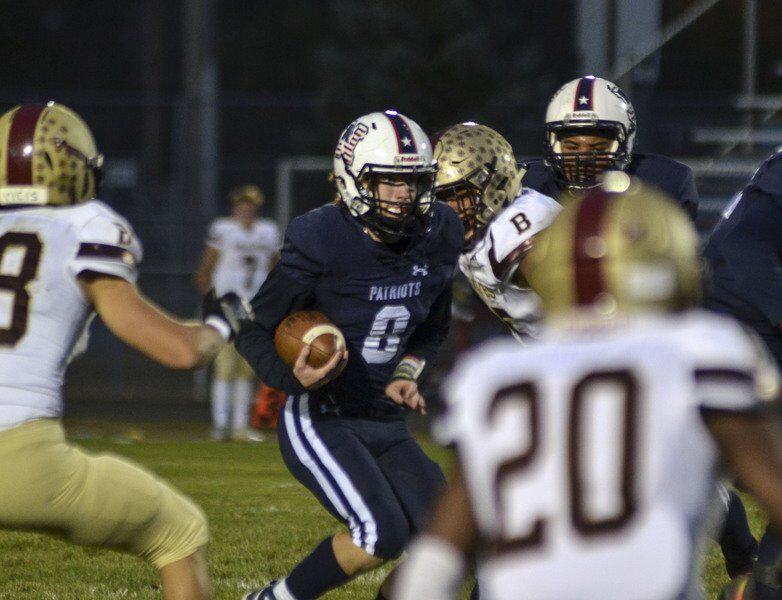 Tribune-Star/Austen LeakeTuck and run: Terre Haute North senior Jace Russell takes off for a scramble during Friday night’s game between the Patriots and Brebeuf at North.

Tribune-Star/Austen LeakeOver the line: Terre Haute North senior Conner Lutz scores on a pass during Friday night’s game between the Patriots and Brebeuf at North.

Tribune-Star/Austen Leake Fighting him off: Terre Haute North junior Donavin Cherry fends off a tackler during Friday night’s game between the Patriots and Brebeuf at North.

Tribune-Star/Austen Leake Got him: Terre Haute North defenders Deven Stillwell (left) and Conner Lutz (right) bring down the runner during Friday night’s game between the Patriots and Brebeuf at North.

The cliché in high school football circles is that you want your team to be playing their best at the end of the season.

It’s a hard-to-achieve goal, but Terre Haute North might be one team that can claim they’ve done it.

The Patriots were dominant at Carl Riddle Stadium in a 28-14 win over Indianapolis Brebeuf. All phases of North’s game – offense, defense and special teams – all had something to crow about in the wake of a good victory over a quality program.

North coach Chris Barrett was buzzing after the game and so were his Patriots.

“It’s been a roller coaster season, a lot of emotion, but these guys come to work every day. Their hard work put us in a position to beat a really good team,” Barrett said.

“We keep telling them we want to coach them up like they’re No. 1 team in the state and we want the same effort and they’re giving it to us.”

North linebacker-running back Conner Lutz tried to convey the feeling he has about his team in the wake of the win.

“We’re just out there running around and playing ball. We’re playing hard with 100% effort all of the time. That’s why I love this team. We can come from nobody to beating teams like this. It’s crazy, honestly,” Lutz said.

You can flip a coin as to which unit was better for the Patriots. Brebeuf’s offense had been averaging 301 yards per game, but the Patriots held them to 242 yards and never led quarterback Kurt Hagerman got on-track. He completed fewer than 50% of his passes.

“We had him under pressure the whole game, firing off the ball and we shut the running game down right off the bat. We didn’t settle for anything less than greatness,” Lutz said.

North’s offense was led, per usual, by quarterback Jace Russell, who was brilliant in the first half in particular. Russell finished the game with 196 rushing and he threw four touchdown passes. Russell continues to be effective as the season goes along even though most opponents know they have to stop him to shut down the Patriots.

North showed promise on its first series, only to give the ball up on downs at the Brebeuf 17. That would be one of the few times the Patriots didn’t get what they wanted from an offensive series in the first half.

On the Patriots’ second series, they blossomed into full flower. Russell had 60 rushing yards, including a 42-yard run, and completed all four of his passes. The last of them was a 17-yard touchdown pass to Conner Lutz on a play-action pass to put North up 7-0.

Brebeuf answered with their own scoring drive, finishing it with a 10-yard touchdown catch by Anthony Annee, but the extra point was blocked, and North still led 7-6.

That proved to be the Braves’ high point.

Another Russell-dominant drive – he had 39 rushing yards and another four completions – was capped by a 14-yard touchdown catch by Jaden Wayt. The play came on 4th-and-goal from the Brebeuf 14 after the original touchdown run by Russell was wiped out due to a holding penalty.

“They don’t get too phased, which is a good thing. If it’s a bad play? They just reload,” said Barrett on North’s ability to shake off adversity.

North would benefit from an ill-timed Brebeuf mistake just before halftime. Lutz intercepted Drake Hagerman and returned it to the Brebeuf 3 with under 30 seconds left in the first half. Donavin Cherry then caught a 3-yard touchdown pass to give North a 21-6 lead.

It was richly deserved and it came on the strength of Russell. He ran for 135 yards and completed 12 of 16 passes for 103 yards and three touchdowns before the break. North’s defense held Hagerman to 6 of 15 passing for 64 yards and the key interception.

The rub of the green continued to go North’s way when Jack Dailey’s opening second-half kickoff floater was recovered by the Patriots to keep Brebeuf from having the chance to build any momentum. The Braves’ cause was further hampered when Wayt caught his second 14-yard touchdown pass of the game with 3:43 left in the third quarter to put the Patriots up 28-6.

Brebeuf did add another touchdown with 3:26 left in the game, but the Braves never posed any kind of viable threat to North’s dominance. Brebeuf was knocked below .500, but the Braves play a tough nonconference schedule, so their 3-4 record is deceiving.

North (4-5) is one of the few Class 5A teams to play next week as it hosts Decatur Central. The Hawks did not play on Friday as their opponent – Franklin – had a virus-related issue.

Normally, a team might want a week off to get injured players back and rest up others, but not the Patriots. North is on a roll, winning two of their last three, and they want to stay that way.

“We’ve got the momentum going. We’re all healthy. I can’t wait for Decatur Central,” Lutz said.

“We want to go. We’re at home. We’re excited about that. It’s a huge task against Decatur Central, but we’re happy with how we’re playing, and more importantly, how we’re preparing to play,” Barrett said.