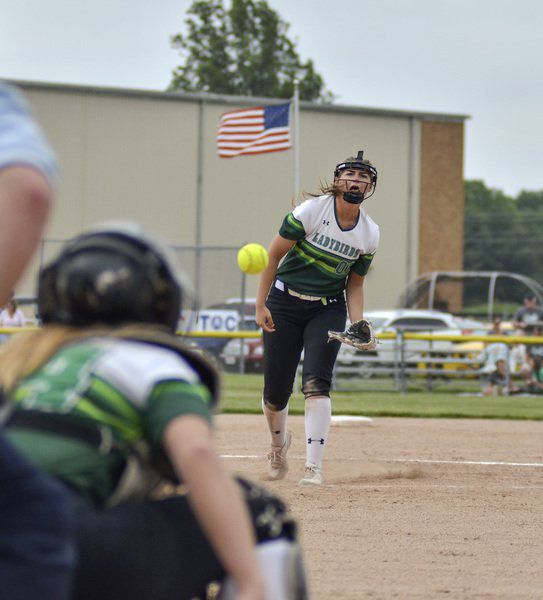 Tribune-Star/Austen Leake Here it comes: North Central pitcher fires the ball to the plate during the Thunderbirds' game against Northview on Friday night. 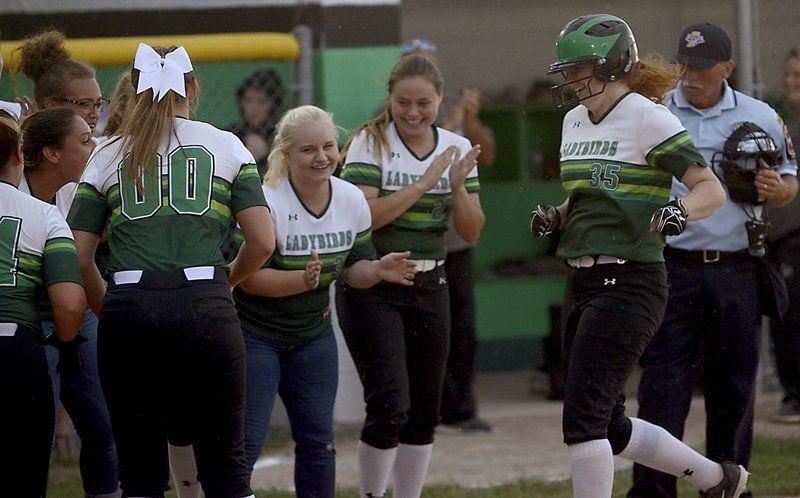 Tribune-Star/Joseph C. GarzaBig smiles in the first: North Central’s Megan Manning hit a three-run home run in the first inning of the regional championship against Covenant Christian on Tuesday in Farmersburg.

Tribune-Star/Austen Leake Here it comes: North Central pitcher fires the ball to the plate during the Thunderbirds' game against Northview on Friday night.

Tribune-Star/Joseph C. GarzaBig smiles in the first: North Central’s Megan Manning hit a three-run home run in the first inning of the regional championship against Covenant Christian on Tuesday in Farmersburg.

In any walk of life, it’s often said that hard work will eventually pay off in the long run.

The junior first baseman was a part of the Thunderbird softball program when they made a long postseason run to the semistate just two years ago, although she was not on the field during the game.

Instead, she, along with her other junior varsity teammates, traveled with the varsity team and watched from the bleachers with the rest of the T-Bird faithful.

She may not have had any business playing on that stage as a young freshman then, but things have changed, and so has she.

Following her freshman year, one where she spent most of her time patrolling the outfield grass, she met with Arnold.

Manning wanted to know what she needed to do to not only become a varsity player, but one that has an impact on the game.

Arnold gave her specific guidelines, both offensively and defensively, to take into her summer travel team and then into the offseason, Manning recalls.

“At the end of the season, I went to Erica and I was like, ‘so to be on varsity next year, what all do I need to do?’” she said. “She told me I needed to get stronger hits and that I needed to improve on my fielding a lot. So, that’s what I did.”

She began working on her swing with Ron Miller, the North Central hitting coach, who told her to use her tall frame to her benefit and things began to click.

Manning started to use her legs at the plate and saw the ball come off the bat with velocity for the first time, giving her confidence heading into her sophomore campaign.

The improvement paid off. She made the varsity roster as a first baseman and as the season progressed, she found herself getting more and more at-bats before making her way into the lineup on a consistent basis.

Still, there was room for improvement. Manning had her name penciled in the lower half of the batting order and wanted more.

So, what did she do?

She continued to work in the offseason. She got stronger, gained more confidence and turned herself into a completely different hitter at the plate.

Once the preseason portion of this season came around in the spring, Manning did something that caught the eye of her head coach, who had not seen her play in a game in several months.

“When we were practicing before the season, we had our varsity pitchers out there pitching and she hit a home run off of both of them and I was like, ‘Holy cow. This kid needs to be [in the heart of the order],’” Arnold said.

Seeing Manning club a pair of home runs was certainly eye-popping for the nine-year North Central coach, but what made it even more extraordinary was the power the junior now had.

Arnold said Manning had never driven a ball over the outfield fence in her life prior to that day she took two of her teammates deep and in that moment, she knew she had a brand-new player on her hands, but what happened in the first game of the year cemented that thought.

“She kept proving herself and then in our first game, she hit a home run and it kind of solidified that she’s in the right spot,” Arnold said.

Manning then found her name in the cleanup spot of the order on a daily basis, a spot that’s typically asked to drive in runs.

And while she has knocked in several teammates throughout the season, she also put together an all-around season at the plate.

Heading into this weekend’s semistate, Manning has a batting average of .480, she has 48 hits, three home runs, including one against Covenant Christian in the regional, and has 37 RBI.

“She’s leading in almost every [offensive] category and that’s who you want in that spot to score those runs,” said Arnold.

Her bat in the heart of the order has been a key to the potent T-Bird offense that averages nearly nine runs per game.

Senior catcher Hannah Shroyer, who bats in front of Manning, said she has all the faith in the world that Manning and the rest of the order behind her will score her each time she’s on the base paths.

“If I get on, I’m always confident in Morgan bringing me around,” she said. “She’s a really good hitter. Very rarely does she not hit … and I’m confident Kaelee [Moody, who bats fifth] will hit Morgan in too.”

Shroyer will be playing in her second semi-state game Saturday, while Manning will be doing so for the first time. Going from cheering on her team in the same game from the stands two years ago to being in the heat of the battle and in the middle of the order is a big change, one that took hard work and a little bit of confidence.

“It’s just crazy to think how far I’ve come,” Manning said. “I think Erica saw it in me my freshman year and I just had to get the confidence to go out here and work.”