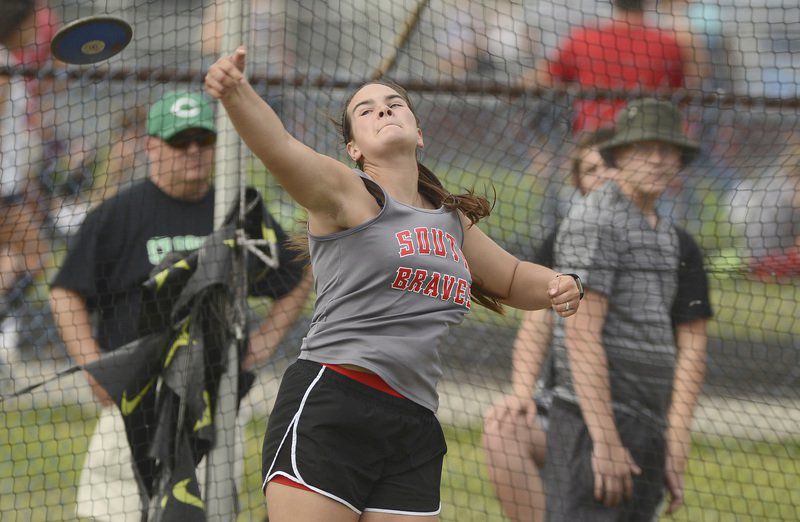 Measure this: Terre Haute South’s Lauren England makes one of her attempts measurable on her way to winning the discus event at the North track and field sectional last season.Tribune-Star file/Joseph C. Garza 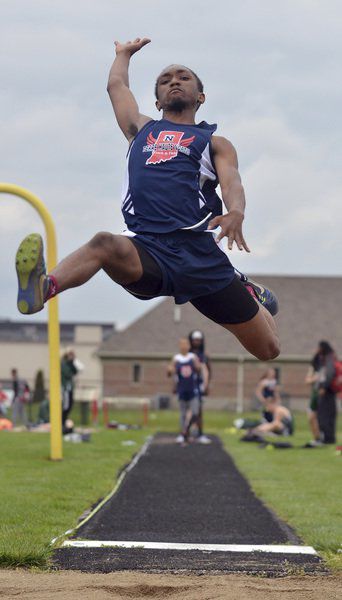 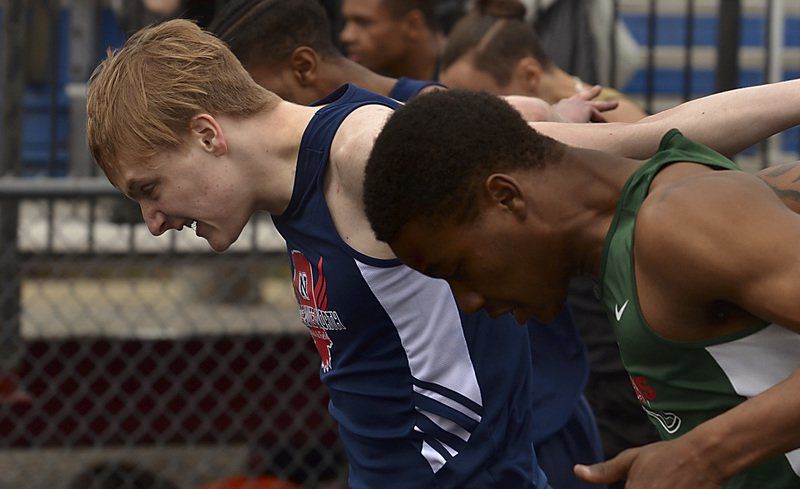 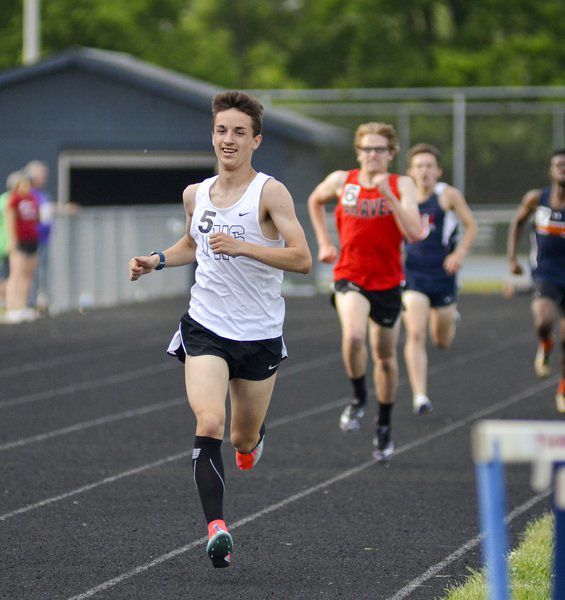 Tribune-Star file/Austen Leake Out in front: Terre Haute South freshman Cael Light smiles as he comes down the final stretch of the 1600 meter race in first place during last season's Boys Track and Field Sectional at Terre Haute North. 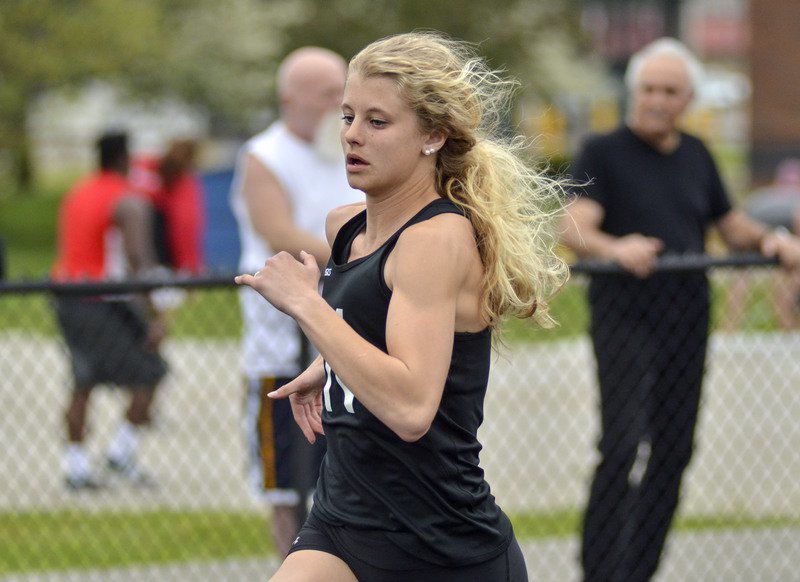 Measure this: Terre Haute South’s Lauren England makes one of her attempts measurable on her way to winning the discus event at the North track and field sectional last season.Tribune-Star file/Joseph C. Garza

Tribune-Star file/Austen Leake Out in front: Terre Haute South freshman Cael Light smiles as he comes down the final stretch of the 1600 meter race in first place during last season's Boys Track and Field Sectional at Terre Haute North.

The final event of the boys sectional last spring pretty much assures that the male half of the high school track and field season is going to be more than a little interesting this year.

Terre Haute South went into the meet’s final event, the 4x400 relay, thinking it needed just a second-place finish to hold off host Terre Haute North for the Braves’ fourth straight sectional championship. The Braves did indeed finish second — to the Patriots — and learned that instead they had lost the meet by half a point and the Patriots were the champs.

Motivation? Here’s what coach Jon Lee of the Braves said recently: “Hopefully that left a bad taste in our kids’ mouths.”

The girls sectional earlier that week lacked that kind of drama, with South extending a winning streak in that competition. The 2019 outdoor season for the Big Four schools begins Tuesday, with West Vigo’s teams going to North Vermillion in a meet that includes Riverton Parke; Thursday, when Northview hosts Clay City, Owen Valley and South Putnam; Saturday, when the Braves hope to go to the Columbus North Invitational (rained out the last two springs); and April 9, when the Patriots host Northview teams in dual meets.

Here’s what those four teams have to look forward to.

• Northview — Coach James Grounds has Eden Siples for one final season, which is a pretty good foundation. Already a three-time state qualifier in the 400, she’ll also high jump, run relays and hope for the relaxation of the four-event limit.

Maggie Lackey and Jolee Kellett, two other legs of Northview’s 4x400 team that almost got to the state, are back, and so is hurdler/long jumper Adrienne Combs.

Freshmen who will help are twins Raimey and Rylie Vitz in sprints, Macey Timberman in long jump and relays (the fourth leg of the 4x400?) and distance runners Evie Noel and Tierinee Bryan. And senior Jenny Lundy, the Knights’ volleyball and basketball star, will be trying the throws and other events. “She’s a good athlete and a competitor,” said Grounds, who had tried to recruit Lundy in previous springs.

The Knights were competitive in a recent Western Indiana Conference indoor meet without Siples. “By the end of the season, we should be pushing for the conference [championship],” Grounds said.

Northview’s boys, coach Mark Raetz said, are “pretty young,” and lost their top two point scorers from last season to graduation and a move away. The Knights weren’t represented at the state finals in 2018 either.

But they won that six-school WIC indoor meet and, Raetz added, “have a lot of competition for different spots.”

One athlete with a spot probably locked up is senior pole vaulter Thomas Gearld, who cleared 12-foot-6 last season and should threaten the school record — Raetz thought it was 14-3 — this season.

• Terre Haute North — Kyla Kenyon, a teacher at McLean and a former hurdler/middle distance runner at the University at Buffalo, is the new coach of the Patriot girls (Alex Bettag is now the boys coach) and has been impressed with “a very family-oriented program, a really good environment.”

Pole vaulter Abby Kissinger is a returning state qualifier for the North girls, while Addison Readinger returns as a strong middle distance runner and three legs of a strong 4x100 team are back: Laurel Staub (also a hurdler), Jada Parker and Mackenzie Turner.

Bettag’s boys team, which doesn’t plan to hand that sectional title back to the Braves without a battle, has most of the runners back from strong 4x800 and 4x100 teams — Anthony Adams and Mason Turner (who might also switch to the 800 as a main event) in the 4x800 and Jonnathan Wyrick, Jace Russell and Ahmad Benford among the sprint foursome. Wyrick and Benford are also threats in the 100 and 200, and Benford might be the Wabash Valley’s best long jumper.

Other veterans are Jack Sherman in shot put, Josh Readinger in the 800, Austin Roman and Santiago Imeroni in pole vault, Ian Gadberry in distance events and Eli Moody in sprints.

Garrett Howard could fill the fourth spot in the sprint relay (his brother Mike was there last season but graduated); Jed Shaw adds to the group of middle distance runners; Jack Dailey and Connor Lutz join returnees Spencer Limcaco and Mason Unger in hurdles; and Noah Guess will compete in high jump.

• Terre Haute South — The Braves have already had state indoor runner-up shot put performances this spring by Lauren England and Jason Swarens but, as the game-show announcer might say, that’s not all.

Coach Ed Jarvis calls England, a state finalist in both shot put and discus last year, “a great role model,” and the South girls also have 75 percent of a state-finals 4x100 team back in Chaiela Edinburgh, Naiya Carmichael and Emily Kerr. Freshman Courtney Jones, who could be called on in several events, could complete that foursome this year.

Lily Barton is back for distance events and may also add the 300-meter hurdles to her event list, while freshman Micah Peals is another strong distance runner. South’s most improved athlete, Jarvis said, might be pole vaulter/jumper/sprinter Cami Loftus, while hurdler Grace Gremore and high jumper Kaylynn Barton are other veterans. Seniors providing leadership include pole vaulter Jaylynn Parks and distance runners Marianne Glaziner and Kaitlyn Koenig.

“We’re hoping to get four years in a row [of sectional championships],” Jarvis said.

In addition to Swarens, Lee can call on a one-two distance running punch in sophomore Cael Light and freshman Matt Gambill and Djibrille “Dj” Salako is the key to a 4x100 group that this year could include Parker Brown, Brayden Bender and Daryl Cooley. Bender was also a regional qualifier in hurdles last spring.

Brown and Damon Shaw should be the best of the long jump crew, Vaughn will be trying high jump, Eric Haworth is in the mix for middle distances and the 4x800 team and Lommock will be another pole vaulter to go with returnee Jacob Knopp.

Last season was “disappointing at the end,” Lee said.

Newcomers trying to mark their mark include freshmen Hailey Kane and Kaelyn Hensley in pole vault (Kane will also be a hurdler); sophomore Keelynn Lopez in throws; freshman Sadie Herring in distance events; freshman Callie Brown in high jump (she was a sixth-grade county champion); and freshman Jayce Dyer and sophomore Hope Andrews in sprints.

Weir was encouraged by her team’s relay performances at the WIC indoor meet, she added.

Bill Petscher, the dean of Valley track coaches (by quite a bit), had a big loss when Ethan Roach, the fastest runner in the Valley and also Petscher’s grandson, graduated last season after three state-finals appearances.

Other contributors should be Luke Frey, Brandon Stroud, Zander Wilbur and Braden Hamrick in sprints and jumps; Ethan Burgess in throws; Levi Saude, Bryce Stateler, Trae Scott and Jayton Owen in distance races; Griffen Akers in pole vault and middle distances; Jordan Augustus in the 400; and Marcus Hollifield in hurdles and pole vault.

“A hard-working bunch of great kids, which I expect to keep improving as the season progresses “ said Petscher, in his 38th season as head coach.