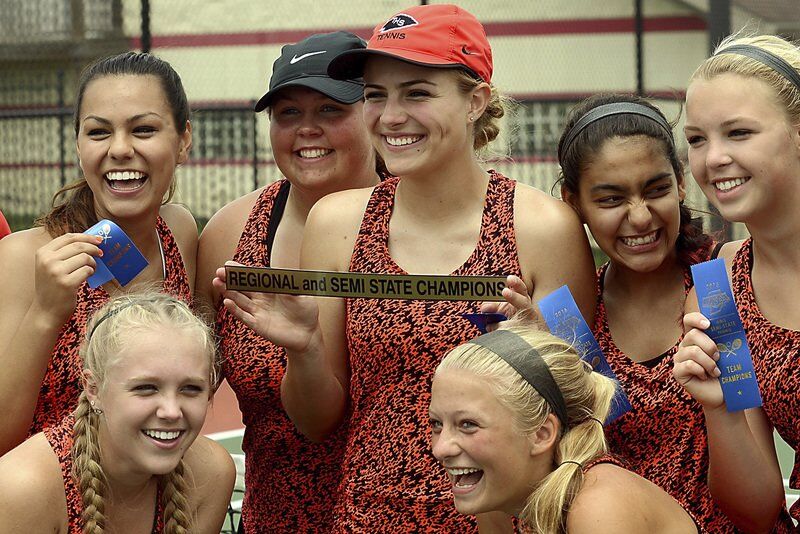 Competitor: Terre Haute South’s Lauren Hambrock (center) holds the regional and semistate champions plaque as she poses for a photo with her teammates after the Braves won the Center Grove Semistate tennis match May 28, 2016. Also pictured are Sofia Saylor and Hunter Duncan (standing left of Hambrock), Lily Yeager and Erin Friedrich (standing right of Hambrock) and Bre Rogers and Pamela Dorman (kneeling). 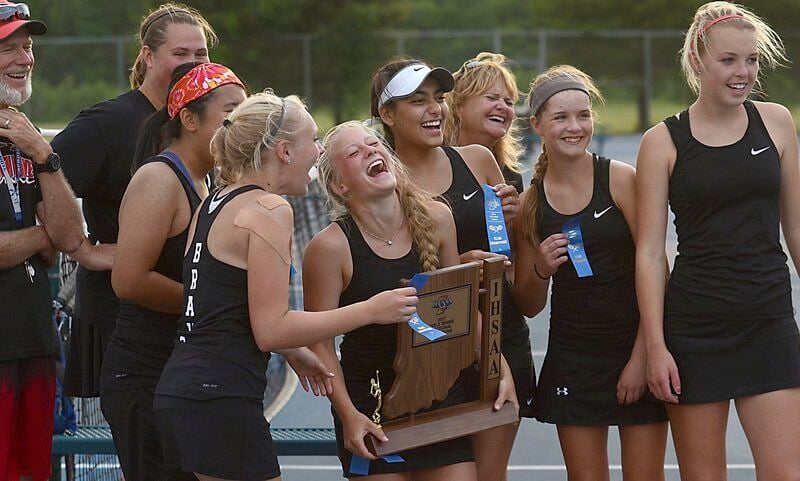 Winning like laughing can be infectious: Members of the Terre Haute South girls tennis team laugh as they celebrate their sectional victory over host Terre Haute North on May 18, 2017. 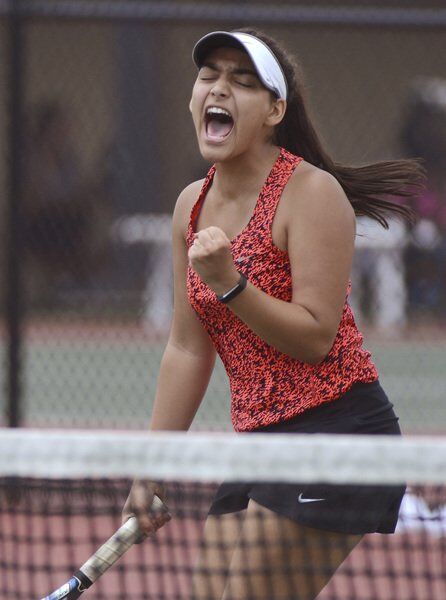 Let ‘em hear ya: Terre Haute South’s Lily Yeagley celebrates a point won during her and partner Bre Rogers’ No. 1 doubles match in the Center Grove Semistate on May 26, 2018. 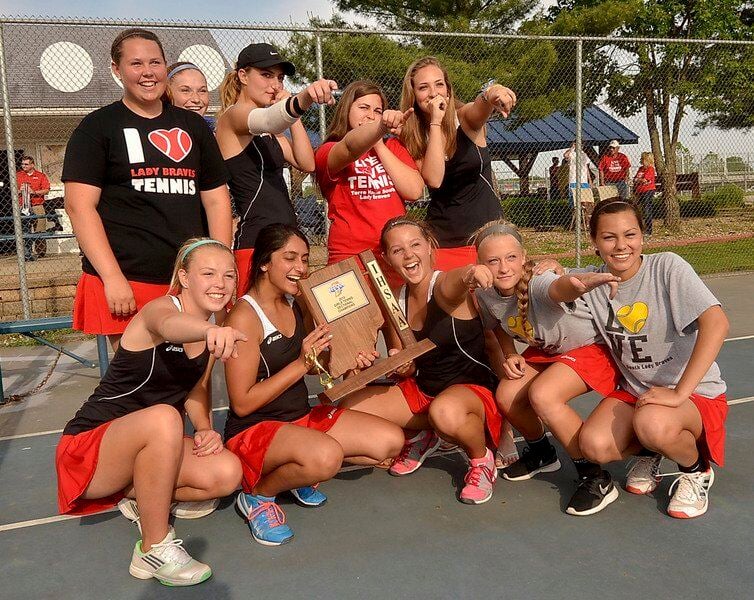 And now a fun photo: Members of the Terre Haute South girls tennis team pose for photos with the sectional championship trophy May 22, 2015, at Terre Haute North.

Competitor: Terre Haute South’s Lauren Hambrock (center) holds the regional and semistate champions plaque as she poses for a photo with her teammates after the Braves won the Center Grove Semistate tennis match May 28, 2016. Also pictured are Sofia Saylor and Hunter Duncan (standing left of Hambrock), Lily Yeager and Erin Friedrich (standing right of Hambrock) and Bre Rogers and Pamela Dorman (kneeling).

Winning like laughing can be infectious: Members of the Terre Haute South girls tennis team laugh as they celebrate their sectional victory over host Terre Haute North on May 18, 2017.

Let ‘em hear ya: Terre Haute South’s Lily Yeagley celebrates a point won during her and partner Bre Rogers’ No. 1 doubles match in the Center Grove Semistate on May 26, 2018.

And now a fun photo: Members of the Terre Haute South girls tennis team pose for photos with the sectional championship trophy May 22, 2015, at Terre Haute North.

If you read the informative “Introduction to Terre Haute South” story in the weekend Tribune-Star, you might recall there was a list of past IHSAA championships won by the high school included with the jump on Page B4.

Yes, South has done extremely well in a lot of different sports since it first opened its doors in the late summer of 1971. But the one that jumped out the most on the small-type list was girls tennis.

According to the ihsaa.org website, the Braves have won 27 sectional championships, 24 regional titles, nine semistate crowns and one state championship in 2001. Not included, according to former South girls tennis coach Dan Hopkins, was a state runner-up appearance in 1981 when the IHSAA did not use a semistate as part of its tournament format.

Most longtime Wabash Valley tennis fans remember the ‘01 state title, the first won by South in any sport, although its girls basketball squad quickly followed suit by capturing the Class 4A championship in 2002.

The Braves’ 2001 singles crew, coached by Bill Blankenbaker, consisted of senior Lauren Clary at No. 1, younger sister/junior Kristen Clary at No. 2 and senior Helen Hildebrand at No. 3. That trio pulled out victories in South’s 3-2 triumph over host Indianapolis North Central in the state semifinals before it blanked Anderson Highland 5-0 in the championship match.

“Most of these girls were on the team when we placed second in the state during the prior two years [1999 and 2000]. Yes, we had three outstanding singles players for three consecutive years that helped make it possible for 40-plus girls [on the roster] to make it to the state finals three years in a row.”

“All of the girls loved him,” Blankenbaker told the Tribune-Star this week. “Coach Stuckey would help them with ... well, just being great girls. You cant have a championship team with just three players. It takes seven [to play in matches] and 40-plus girls to practice with, party with, ride the bus with and become great friends with.

“My job was easy because these girls were the best. It was an honor to be their coach.”

Lauren Clary, who lives in Silver Spring, Md., with her husband and their three young girls and works as a pediatric psychologist with children coping with medical illnesses, also looks back on those times fondly.

“We have such special memories as a team,” she said. “Winning was exciting, of course, but the laughter during bus rides, practices and meals together really remains with me to this day. And, of course, as a senior riding around town on a fire truck to celebrate our state championship was a highlight. My teammates and I still bring this up when reminiscing about our last year in high school.

“I now realize what an impact practicing and playing with my sisters and best friends had on me, something I couldn’t grasp at the time. I was fortunate to attend college with both of my sisters and play alongside Kristen while at Xavier. We took many of our traditions at Terre Haute South to college with us.

“I am most grateful to our positive and patient coaches — Bill Blankenbaker, [assistant] Larry Stuckey and [assistant] Mandi Cox — and our committed parents and our loyal community. Our team worked so hard on the court and thrived with the support around us.”

Patterson and a couple of her senior players from their final-four 2016 team shared their opinions about why that South squad fared so well — undefeated until a 3-2 loss to eventual state champion Indianapolis Cathedral in the state semifinals.

“The girls had a lot of success because most of them work on their game year-around,” Patterson assessed. “A lot of them came from tennis families, so you would see the girls out hitting with their mothers, fathers or siblings. They truly enjoyed playing.

“The 2016 team was a special one because the seven varsity players were all dedicated to being the best they could be. Having Lauren Hambrock as a leader was instrumental as they all looked up to her and she set an example. She was on the court daily with her father.

“Erin Friedrich was a very strong player to have at the 2 singles spot. Our No. 1 doubles team consisted of Pam Dorman and Sofy [Sofia] Saylor, who were both very experienced players and spent a lot of time on the court with their fathers. Lily Yeagley and Hunter Duncan [at No. 2 doubles] were both very competitive girls who refused to lose. Everyone knew their role and there were no quarrels about the lineup. ... They all knew how far they could go right from the start.”

Looking back, Saylor mentioned that Patterson was “very supportive” as a coach.

“We had lots of resource in the pros in our community,” she added. “Also, each No. 1 player [in singles and doubles] had fathers who were willing to put in hours practicing with us [Mike Hambrock for Lauren, Todd Dorman for Pam and the late Mike Saylor for herself].”

Lauren Hambrock, who just wrapped up four seasons with the University of Southern Indiana women’s team and recently moved to Bloomington, offered her views of South tennis as well.

“Although I am aware of the talented players and successful teams that Terre Haute South has had matriculate through its girls tennis program in the past, like Lauren Clary and their 2001 state championship team, I can really only reflect on my four years.

“In my time at South, we were no strangers to the state finals, as I went to the singles individual state finals my sophomore year, we went to the team state finals my junior year and the team final four my senior year. As with all the other winning South girls tennis teams, that success does not happen by accident. I attribute my team’s success to talent depth throughout the lineup, devoted players who worked hard year-around, great parents who were willing to help out, a vast knowledge of the game, kind teammates and a dynamic love for tennis shared by every player and coach.”

When Patterson stepped down as girls coach prior to the 2019 campaign, Janet Rowe took over and knew she had giant footsteps to fill. The Braves reached the Center Grove Semistate in ‘19, but left without the title after a 5-0 loss to Park Tudor, the eventual state runner-up.

Rowe knows what it took before and what it will take in the future — barring COVID-19 interference — for South to be among the state’s elite girls tennis programs.

“I believe that a big part of the South girls tennis success can be attributed to the hard work of many of the players year-around,” she emphasized. “I have only coached one year in 2019, since 2020 was canceled [by coronavirus concerns], and the majority of my varsity and several of my junior varsity players worked year-around.

“Coaching comes into play and contributes to the teams’ success through deciding who plays where and giving pointers and encouraging the players on the court. But it comes down to the players’ practiced technical skills, strategic knowledge, fitness for those long, hot matches and dedication to the game — both in-season and especially out-of-season — that really brings them success.”

Other reasons given by Blankenbaker for South’s long-term achievements are having an indoor facility in the Brickway Tennis and Pickleball Club (formerly the Wabash Valley Tennis Club, aka “The Bubble”) and the Terre Haute Junior Tennis Association to keep athletes playing during summer months.

“Having some good past and present coaches to keep the girls interested in playing tennis,” he continued. “In my 19 years [as coach], having great assistant coaches helped. Some not too knowledgeable about tennis but great with the girls, making sure they had fun. Plus having an assistant like Wes Kirk, who was very knowledgeable with tennis, for 16 years.”