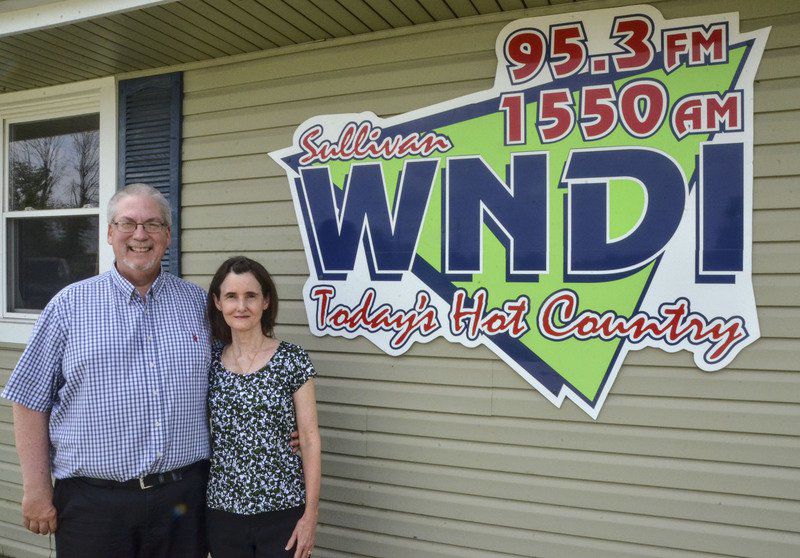 Local radio: John and Teresa Montgomery have been a staple on the Sullivan airwaves for almost 30 years. 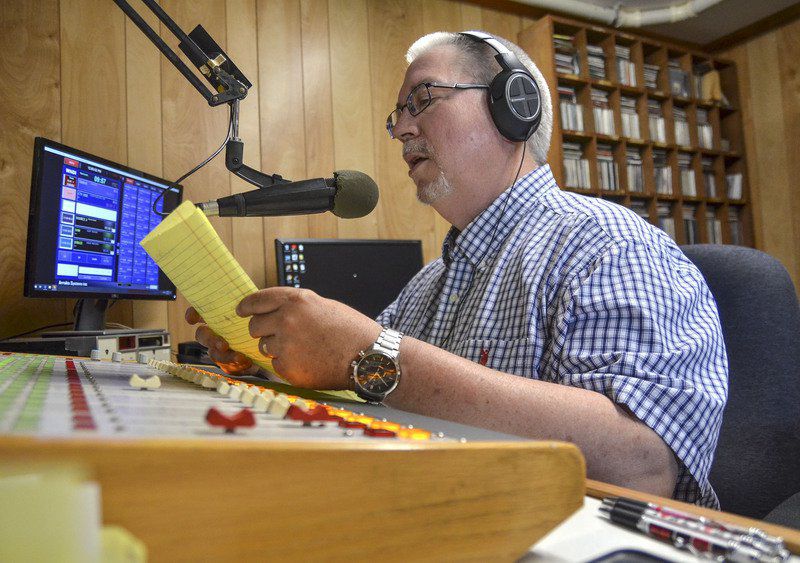 On the air: John Montgomery reads an ad on WNDI on Monday afternoon in his Sullivan studio. 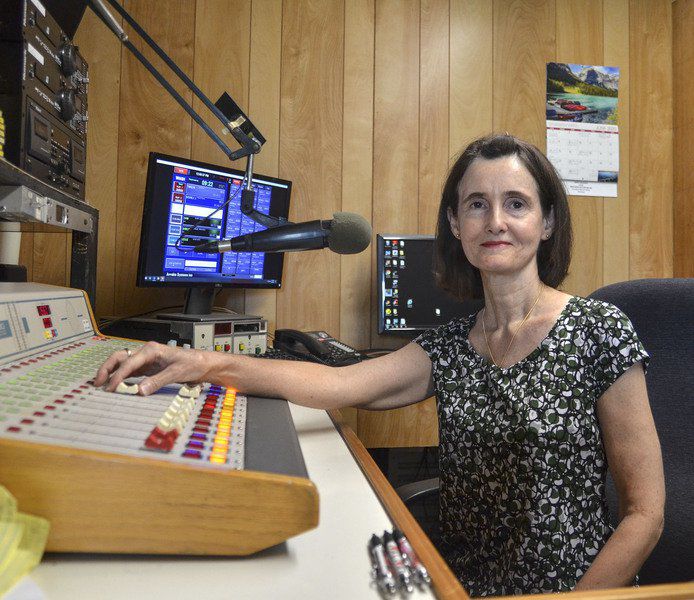 Control panel: Teresa Montgomery sits at the control panel at WNDI in Sullivan. 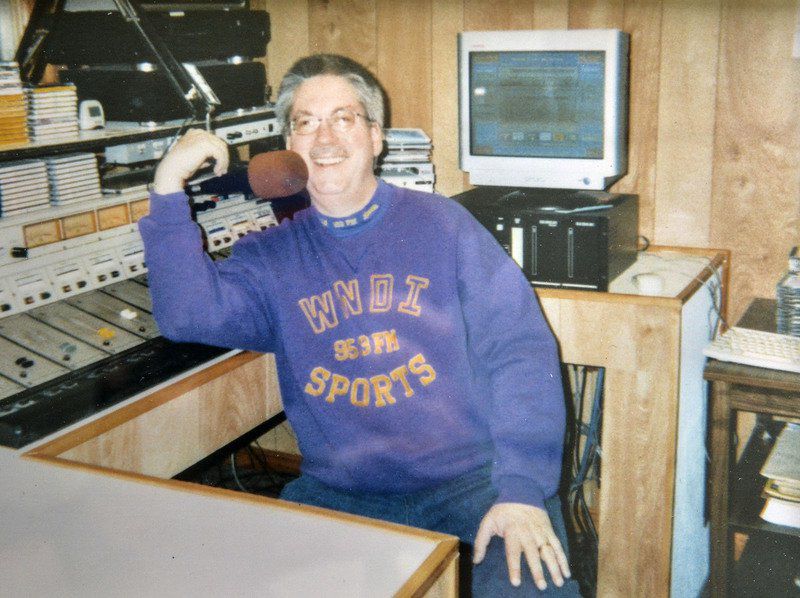 Back in the day: John Montgomery has been calling games on the radio in Sullivan for decades.

Local radio: John and Teresa Montgomery have been a staple on the Sullivan airwaves for almost 30 years.

On the air: John Montgomery reads an ad on WNDI on Monday afternoon in his Sullivan studio.

Control panel: Teresa Montgomery sits at the control panel at WNDI in Sullivan.

Back in the day: John Montgomery has been calling games on the radio in Sullivan for decades.

In 1993, radio broadcaster John Montgomery was named “Sportscaster of the Year” for his work in the state of Kansas.

Approximately one year later, he and his wife Teresa packed up their belongings and moved to Sullivan, Ind., where he has been the radio voice of its high school's athletic teams ever since.

That’s when the Montgomerys — who had formed JTM Broadcasting Corp. — purchased WNDI, which simulcasts on 95.3 (FM) and 1550 (AM). The AM station only stays on the air from 8 a.m. to 5 p.m. But John, the primary broadcaster, is still able to relay the action of most Golden Arrows teams on the FM side of the dial.

“When we came here, we knew the high school was going to be the focal point of the community. We definitely wanted to get involved and help support and promote kids and activities in athletics in a positive way. And that’s really what we’ve done since we took over in 1994.”

John has had different partners in the broadcast booth since then, but he also doesn’t mind working solo. Either way, it’s obvious he is passionate about Sullivan athletics, even though he grew up in Wichita, Kan., and his wife grew up in Macomb, Ill.

“[Genuine interest in Sullivan sports] started right from Day 1,” insisted the 58-year-old John Montgomery, who played baseball at Kansas State University after a stint at Western Arkansas Junior College in the early 1980s.

“When I first got to town, one of the first people I met was the principal at that time, who was Ed Chickadaunce. I told him that my idea was to do as many [Sullivan] athletic events as I possibly could. He was very generous with me. He gave us whatever we needed to broadcast, whether it was from the football field, the basketball gym or the baseball field.

“We’ve also had great athletic directors to work with. The current one, Otto Clements, has always been great with us. He’s always made sure we had everything we needed.”

Although football, basketball and baseball are considered the three major sports — “We’re one of the few stations who will do an hour pregame show for football and usually for basketball,” John noted — he has tried his vocal skills at broadcasting for at least eight total sports.

Some went more successfully than others.

The other five sports that came to mind were volleyball, wrestling, soccer, softball and track and field.

“I showed up for a tennis match one time,” he added. “But they play all the [singles and doubles] matches at the same time and I didn’t realize that. So that didn’t last very long.”

Asked about the most memorable sporting event that he’s ever called for Sullivan, John Montgomery thought for a few seconds before answering.

“The first boys basketball sectional title they won after I got here with Jeff Moore as coach [in 1998] at West Vigo was quite a moment,” he replied. “And also that same year when we beat Franklin at Franklin in the [Class 3A] regional title game. ... That was a real thrill.”

Most games don't turn out as memorable as those. But even the routine regular-season matchups require quite a bit of work.

“We start preparing for Friday night football on Monday ... getting our stats lined up and trying to figure out what we want to talk about,” John mentioned. “And on Thursday, we normally do interviews [for the pregame show Friday night].”

Setting up for a Friday night broadcast can take 15-20 minutes, or longer if the press box is extra small.

“I can’t imagine never broadcasting a game,” he said. “I don’t know if I could ever retire from that. It’s not really something I’m thinking about right now. I thoroughly enjoy it.”

Regardless of when John may or may not quit, he can rest knowing that not only has he been honored for broadcasting excellence in Kansas, but he also received the 2008 Marv Bates Award for "Sportscaster of the Year" from the Indiana Sportswriters and Sportscasters Association. The award was named after Bates, an Evansville radio announcer who perished in the December 1977 plane crash that also killed the entire University of Evansville men’s basketball team.

One of the many coaches who would miss Montgomery if he did step away from the mic is Moore, who has guided the Golden Arrows' boys basketball squad for 30 years.

"John Montgomery is truly the voice of the Golden Arrows," Moore emphasized. "He supports all sports at Sullivan High School. There are very few sports that he hasn’t broadcast at one time or another. He has received numerous awards through the IHSAA and is very deserving of them. I’m sure we have fans that sometimes can’t attend games, but they know they can stay away and listen to our games from home. He makes it seem as if you are on the field or on the court. John is an icon at SHS.

"We are truly blessed to have him as part of our athletic programs."