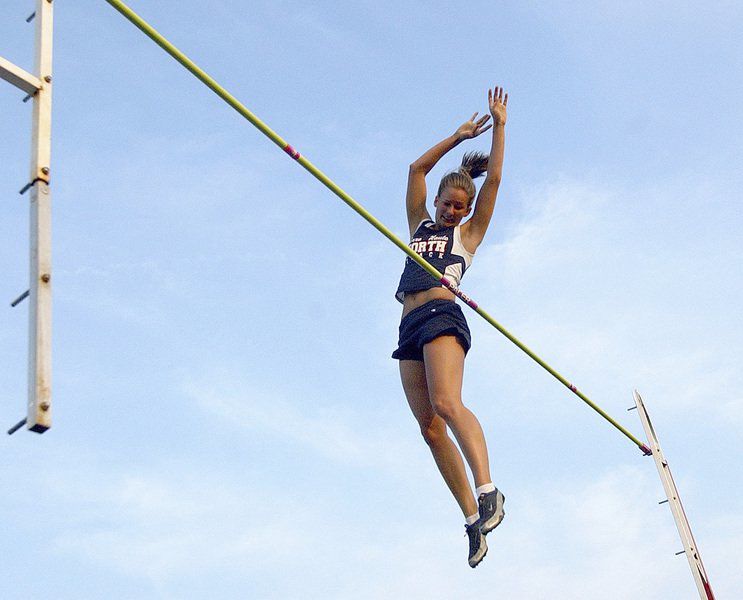 Tribune-Star file/Joseph C. Garza Cleared it: Terre Haute North's Kylie Hutson clears the bar during one of her attempts in the pole vault competition on May 9, 2006 during the North-South track meet at South. She was a four-time national champion in that event when she got to Indiana State. 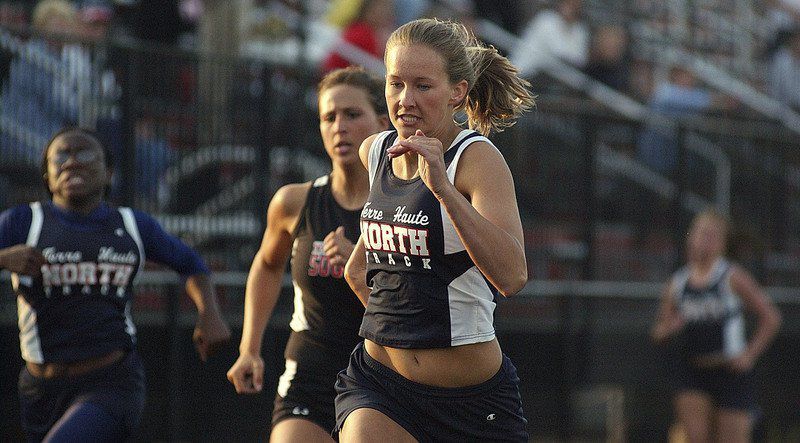 Tribune-Star file/Joseph C. Garza One of four victories that day: Terre Haute North's Kylie Hutson crosses the finish line to take first place in the 200-meter run during the annual North-South track meet on May 9, 2006 at South. Hutson won the 100, 200, long jump and pole vault competitions that day and went on to win four national pole vault championships at Indiana State.

Tribune-Star file/Joseph C. Garza Cleared it: Terre Haute North's Kylie Hutson clears the bar during one of her attempts in the pole vault competition on May 9, 2006 during the North-South track meet at South. She was a four-time national champion in that event when she got to Indiana State.

Tribune-Star file/Joseph C. Garza One of four victories that day: Terre Haute North's Kylie Hutson crosses the finish line to take first place in the 200-meter run during the annual North-South track meet on May 9, 2006 at South. Hutson won the 100, 200, long jump and pole vault competitions that day and went on to win four national pole vault championships at Indiana State.

Kylie Hutson became the first Vigo County girl to win two McMillan Awards when she was honored as a junior and senior at Terre Haute North in 2005 and 2006, and the three-sport star probably could have been considered for the honor as a freshman and a sophomore too.

Then she got even better.

As a result, Hutson — a four-time national women's pole vault champion at Indiana State — was a relatively easy choice as North's Most Memorable Female Athlete.

"Along with every high school student, I was just trying to get by," Hutson told the Tribune-Star when asked about entering North as a freshman, "but doing what I love was definitely a plus. I think I was at practice or a competition every day but Sunday [throughout her four years as a Patriot]."

In the fall, she played volleyball and started what proved to be a record-setting career by becoming one of the best in the county as an undersized freshman outside hitter.

"We weren't doing very well [as a team] at that time," admitted Kris Painter, North's volleyball coach then and its athletic director now, "and that class, which included not only her but good players like Laura Burdick, Abby Dorsett and Carol Weatherford, started the turnaround.

"Her work ethic and how good she was [made her special]. Good players make everybody else better," Painter added. "And she was a good teammate, which was more important [for team success] than her athletic ability."

In the winter Hutson turned to diving, and is one of only three Patriot divers to reach the state finals four times (Heather Elsey and Cathy Grimes the other two).

"Most of [the athletes] I get are gymnasts who switch to diving because it's easier on their body," longtime North diving coach Troy Cuthbertson said. "She started diving when she was 8 or 9 years old, and by the time she got to high school she had a complete list of dives.

"[Diving] was probably her weaker sport," Cuthbertson added, "but she was great to work with, and I got great support from her family."

And in the spring was track and field, where coach Mike Dason had the option of using her in sprints or jumps.

"She would do anything I asked her to do," Dason said this week. "She would say, 'Will it help the team?'

"I lied to her — quite often," Dason added with a smile. "I asked her if she would learn to pole vault and she didn't want to. I told her 'If you practice pole vault, you won't have to run the 400.' "

"I started [sports as a young girl] with dance, and I got really good in tumbling," Hutson said. "I was on a tumble team, and that led to gymnastics . . . which gave me all my body awareness [that came in handy in diving and vaulting].

"I didn't really have goals," Hutson added, "I just wanted to win at anything. When I won those McMillan Awards I was clueless — I had no idea of the prestige involved."

And when she got to Indiana State, Hutson took off — literally.

"It all started with her being an all-around good athlete," said Jeff Martin, ISU's current associate head coach who is in charge of jumps. "She had a great high school coach in Mike Dason, who used her in multiple events [including, Hutson no doubt recalls, quite a few more 400s] and built a very good foundation. And Travis Herb did a good job teaching her [in vaulting].

"She was able put all her focus in just pole vault, and when she was on the pole she knew no fear," Martin continued. "I just tried to stay out of her way."

"It was just my drive," Hutson said in explaining her improvement as a Sycamore. "Jeff Martin was my pole vault coach, and we created goals together. Then it was just a matter of getting better year by year. I wanted to be the best, I just didn't realize I could be the best."

"I just wanted her to be the best and win one [national championship]," Martin said. "Four? I was lucky enough to ride the wave with her."

Hutson continued to compete after college, but fell short of her ultimate goal — a spot on the U.S. Olympic team. "I had a back injury that made me give up that dream," she said.

She currently works as a marketing and acquisitions analyst for a real estate firm in the Phoenix area (her competitive drive hasn't abated, she said). She doesn't know if her athletic history is a help, but added, "When people Google me, at least it's not something bad."

She was married in October to Jake Conn, who was also a pole vaulter at ISU. "I never beat his best jump," she said in mock regret. "He's cleared 16-feet-plus, and my best was 15-7."