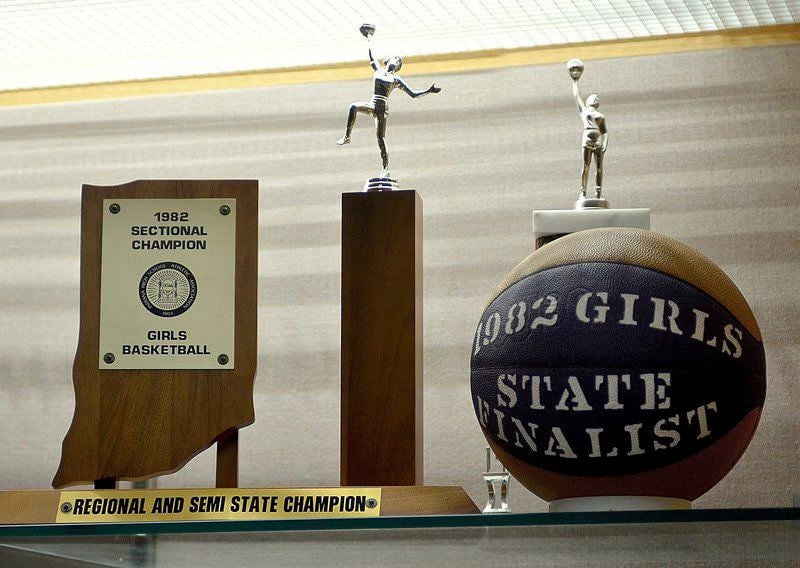 Tribune-Star/Joseph C. Garza Lots of hardware: The 1982 Sullivan girls basketball team earned these trophies on its way to the Final Four. 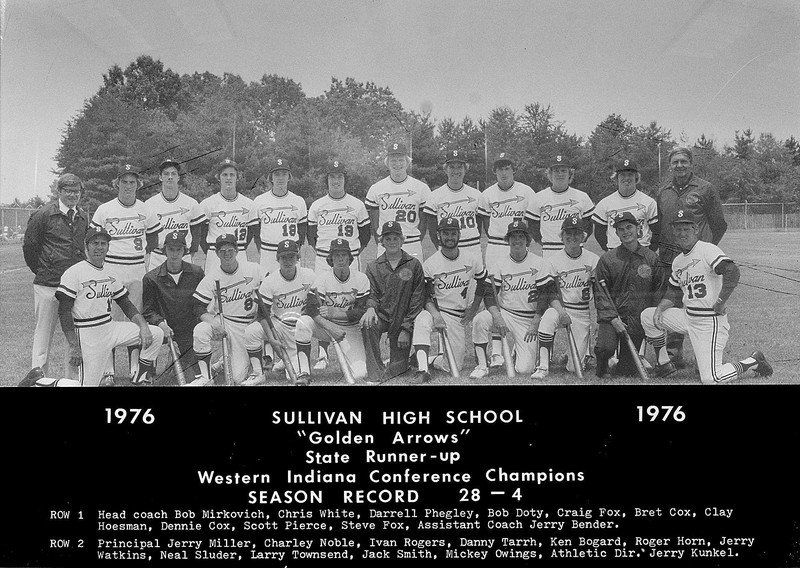 Tribune-Star/Joseph C. Garza Golden opportunity: This photo of the 1976 Sullivan baseball team hangs in the hallway outside of the gymnasium at the school. The 1976 Golden Arrows were the state runners-up.

Tribune-Star/Joseph C. Garza Lots of hardware: The 1982 Sullivan girls basketball team earned these trophies on its way to the Final Four.

Tribune-Star/Joseph C. Garza Golden opportunity: This photo of the 1976 Sullivan baseball team hangs in the hallway outside of the gymnasium at the school. The 1976 Golden Arrows were the state runners-up.

Determining the best athletic team that Sullivan High School has ever had might be as simple as asking Lee and Shirley Townsend about any arguments that may have come up in their living room several decades ago (spoiler alert: there apparently weren't many).

Larry Townsend was the first baseman and cleanup hitter for the 1976 state runner-up Golden Arrows in baseball. Paula Townsend was a batgirl for that team, then the starting center for the 1982 Sullivan girls basketball team that reached the Final Four.

Both of those accomplishments happened well before class sports, incidentally.

"That's a tough one," Larry Townsend answered when asked the which-team-was-better question. "We had a pretty darned good baseball team. That's probably the best memory I have of high school.."

"I think we both really supported each other," Paula Townsend Wright said. "The true winner was my mother; she had to wash all the uniforms."

Bob Mirkovich, who coached the 1976 baseball team and was Sullivan's principal for the 1981-82 school year, agrees with his first baseman.

The 1975 Golden Arrows gave Mirkovich reason to expect success the following year by getting to the championship game of the Bloomington Regional. The following season they headed into postseason play with a one-two pitching punch that was as good as any in the state.

Left-hander Charley Noble and right-hander Mickey Owings split time on the mound and in right field and were supported by a lineup that was tough from top to bottom. Joining Larry Townsend in the infield were Scott Pierce at second, eventual state Mental Attitude Award winner Jack Smith at shortstop and Bob Doty at third, with Dennie Cox behind the plate, Neal Sluder in left field and Clay Hoesman in center.

The Arrows scored 38 runs in three sectional wins, then beat an outstanding Rosedale team at the Terre Haute Regional. Clinton knocked off defending regional champion Terre Haute North (just two years removed from its own state championship) and the Arrows advanced by beating the Wildcats.

If there's a tiebreaker between the 1976 baseball team and the 1982 girls basketball team, it might be in strength of opposition. After beating West Lafayette to open the Lafayette Regional, the Arrows had to face Kokomo and its ace pitcher Pat Underwood in the championship game.

Underwood is still Indiana's all-time leader in strikeouts and shutouts — "He struck me out three times," Larry Townsend said, and wasn't the only Sullivan player in that boat — but both Noble and then Owings pitched just as well for Sullivan. "I think we only allowed one hit in that game," Mirkovich said.

Both starting pitchers were on an innings limit and "as soon as [the Wildkats] pulled [Underwood], we got three guys on in a row and scored," Larry Townsend said. Sullivan won 1-0 in extra innings, Cox starting the winning rally with Hoesman getting the RBI.

Noble pitched the Arrows' second straight one-hitter in the afternoon game of the state finals, a 3-0 win over Forest Park. "Our pitching was pretty good," Mirkovich said.

But the Arrows fell behind 5-0 in the first inning of the championship game against LaPorte (almost as feared as a team as Underwood was as a pitcher). They battled back to tie the score in the fourth and it stayed that way until LaPorte scored in the bottom of the seventh.

Coach Dru Bock's 1982 basketball team may have been a little more of a surprise to people outside of Sullivan, with freshman Maria Stockberger and sophomore Julie Rotramel assuming key roles alongside Paula Townsend, Sherri Jett and Sue McKinley.

The Arrows beat North Central and Clay City handily in sectional play, beat Bloomfield and Bedford North Lawrence at the Washington Regional and downed Austin and Evansville Bosse to win the Bedford Semistate.

Bock is now Dru Pattee, and she said, "That team was so dedicated. They had fun while they were pushing themselves. We didn't have open gym back then, so they played pickup games, they ran the golf course to get in shape . . . probably the most dedicated team I've ever had, and all very smart too."

At Market Square Arena, however, the Arrows ran into foul trouble and Jody Beerman. Beerman, a junior who would become Indiana's 1983 Miss Basketball, scored 30 and led Heritage past Sullivan 66-55 and then over Valparaiso for the state championship later in the day.

That game was one of the few that Larry Townsend, who was a Navy pilot before working for U.S. Customs, got to see his sister play.

So when Paula Wright, currently an administrator at the Alamodome in San Antonio, said with a smile when asked the big question this week, "Hands down, it was definitely the girls basketball team," her brother said, "I'll go with my sister."

Good parenting skills by Lee and Shirley are obviously still a factor.