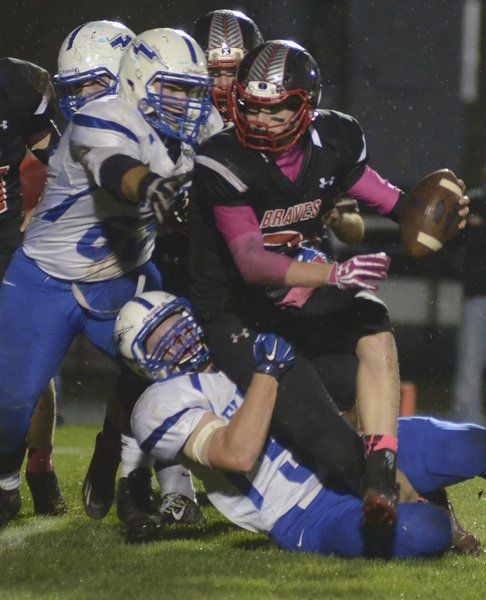 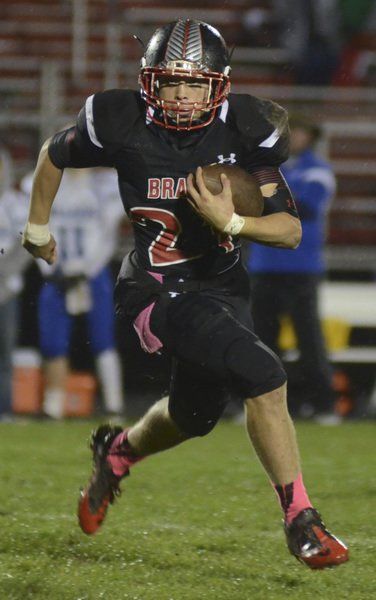 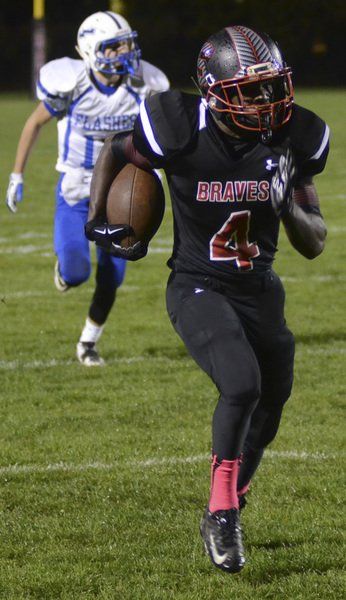 Tribune-Star/Jim Avelis Almost: Terre Haute South wide receiver LaMarkis Stevenson heads down the sideline after taking a Timmy Herrin Pass. Stevenson was pushed out of bounds at the 7 yard line.

Tribune-Star/Jim Avelis Almost: Terre Haute South wide receiver LaMarkis Stevenson heads down the sideline after taking a Timmy Herrin Pass. Stevenson was pushed out of bounds at the 7 yard line.

With 4 minutes, 18 seconds to go in the third quarter, all seemed lost for Class 5A No. 7 Terre Haute South.

Worse, South quarterback Timmy Herrin was on the Bob Clements Field turf writhing in pain, feeling his left ankle. It seemed all of the stars were aligned against the Braves.

"It hurt. I'm not going to lie. I came off the field knowing I'd come back in. It's not going to feel well in the morning, but I had to push through it. I had to do it for my seniors and my team," Herrin said.

Anyone who's watched South this season knows it's best not to count the Braves out, not until all is said and done. With four wins by a touchdown or less or in overtime, the Braves know how to dig down for a result.

Make that five wins. Inspired by Herrin's fourth quarter return, the Braves went to work. They used their own go-to offensive play, blocked an extra point and got forced a key fourth-quarter turnover. The cardiac Braves rallied to send the Flashes to a 21-20 defeat in South's home finale.

"I'm just proud of this team for battling for all four quarters. I told this team at halftime it was going to be a battle and to finish it and they did," South coach Tim Herrin said.

Timmy Herrin threw for 309 yards and two touchdowns on a drizzly night not conducive to throwing the football. According to coach Herrin, his two TD passes gave him 35 for his career, a South school record.

Herrin threw for 133 yards in the fourth quarter alone. Justin Jenkins had six catches for 101 yards, including the go-ahead touchdown with 5:06 left.

South needed every yard it could get as Franklin Central ran the ball and controlled the clock. Making hay out of trap runs, Franklin Central running back Aaron Austin rushed for 298 yards and three touchdowns.

However, South held Austin just enough in the second half and called upon its senior quarterback to shake off his injury and save the day.

Herrin missed one third-quarter series, but he got taped up on the sideline, and returned to the fold to start South's first fourth-quarter drive.

A 32-yard pass to Kameron Bell on the right sideline got the ball rolling and proved ominous for the Flashes. South quickly found out the Flashes were vulnerable against their wheel routes. The blood was in the water.

"We kind of threw stuff together. We were drawing in the dirt. We were making up routes. We had a couple of wheels and it worked. It was good coaching and good play-calling," Timmy Herrin said. "When we started throwing the wheel routes, it opened up other things."

Continually going to sideline wheel routes, South set itself up for a 13-yard game-tying touchdown connection from Herrin to Jenkins.

Austin, however, wasn't going to go quietly. On Franklin Central's first play, he went right, cut left and hit daylight. His 52-yard touchdown run put the Flashes back on top. It seemingly a demoralizing blow right after South had tied it.

It proved to be the Flashes' zenith. South's defensive line, led by Lane Bonar, blocked the extra point and the Flashes' lead was just six at 20-14.

A 34-yard kick return by Jenkins set South up at midfield and they kept hammering the nail on the right sideline. A 15-yard catch by LaMarkis Stevenson and a 33-yard grab by Jenkins got South to the Franklin Central 1.

Still, Franklin Central had 5:06 to work with, but instead of grinding the ball, as it had done so well to that point in the game, they broke character. On a play-action pass, Franklin Central quarterback Chris Arnold found Wil Huber for a 29-yard gain.

Huber, however, couldn't hold on to the ball? Fumble or incomplete pass? It was close. The officials ruled it a fumble and Bell recovered at the Franklin Central 25.

South gained a trio of first downs, two by Franklin Central penalities, and ran the clock out.

South got its passing game going late as it was difficult early in the game with a steady rain falling at kickoff. It played right into Franklin Central's hands.

On Franklin Central's second series, Austin slipped off left tackle and broke away for a 50-yard touchdown run to put the Flashes up 7-0. Austin proved he could later hurt South with nibbles as much as big bites.

Before that, though, South showed it could put together a long series. The Braves marched 66 yards on 13 plays, getting within a taste of the end zone at the Franklin Central 2. South, however, never got into the end zone. On fourth-and-goal from the 3, Herrin was pressured and his knee went down at the 10.

Little did the Braves know that they wouldn't see the ball again for 8 minutes, 46 seconds. Franklin Central took over at its own 10 and proceeded to grind the Braves' defense down.

Primarily using Austin -- who gained 76 yards on the series, mostly from trap runs -- the Flashes gained all 90 yards on the ground. Austin, of course, capped it with a 6-yard touchdown to make it 14-0.

The Braves' response? It took all of 11 seconds. Michael Watt -- South's gazelle-like kick returner -- struck gold again. He grabbed a loose ball at the South 6 and took advantage of a huge seam up the middle to break free for a 94-yard touchdown and cut the Flashes lead in half.

South nearly tied it by halftime. A 57-yard pass Herrin-to-Stevenson pass set the Braves up at the FC 5 with under a minute left. But on an attempted fade route, Stevenson slipped and Franklin Central Everett Clark intercepted Herrin in the end zone. The Flashes held on to their 14-7 advantage.

The Braves once again drove inside the Franklin Central 5-yard line on its first third-quarter series. The Braves tried three quarterback runs with Herrin, but the Flashes held firm. On fourth down, Herrin tried to roll left, but was caught from being and sacked. For the third time, South failed to score deep inside Flashes territory.

Though it seemed to be a bleak moment at the time for the Braves, South had done a better job against the Flashes' run game in the second half. It helped set up the dramatic finish.

"We slowed down our linebackers. All season they've ran outside and off-tackle. They adjusted and ran more inside on us early. We were over-running some plays. We told guys to calm down and we went back to our four-man front a little bit. That helped keep guys off linebackers," coach Herrin said.

The Braves will have a formidable task to end the season as it finishes at Bloomington North. It's the toughest of three games the contenders have. Southport plays at Columbus North and Bloomington South plays at Perry Meridian.

But the cardiac Braves are still in the hunt.

"We went 2-8 last year, but from the start of the season, we knew we were better. With each game, we're proving ourselves. We're checking off goals on our checklist. Right now, we have a conference championship and we're striving to get it next week," Jenkins said.