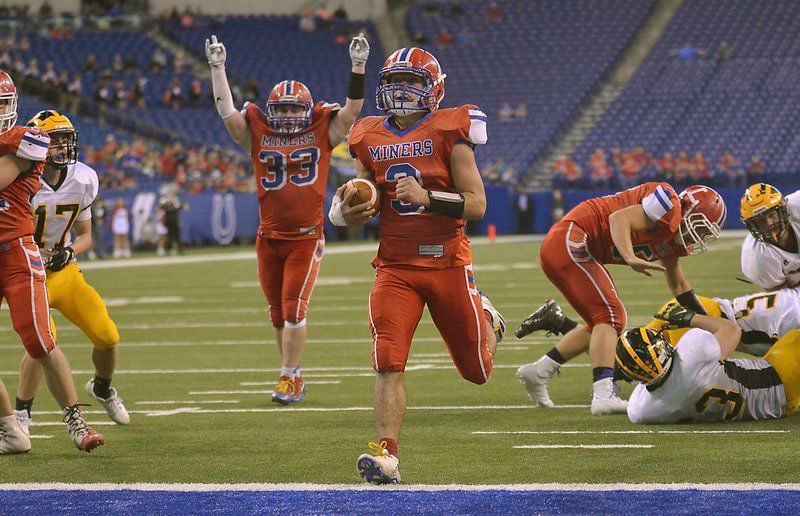 Tribune-Star file/Joseph C. Garza Pulling away: Linton quarterback Tyler Meurer scores on a 5-yard run in the fourth quarter of the Class A state championship game against Pioneer on Nov. 26, 2016 in Lucas Oil Stadium. 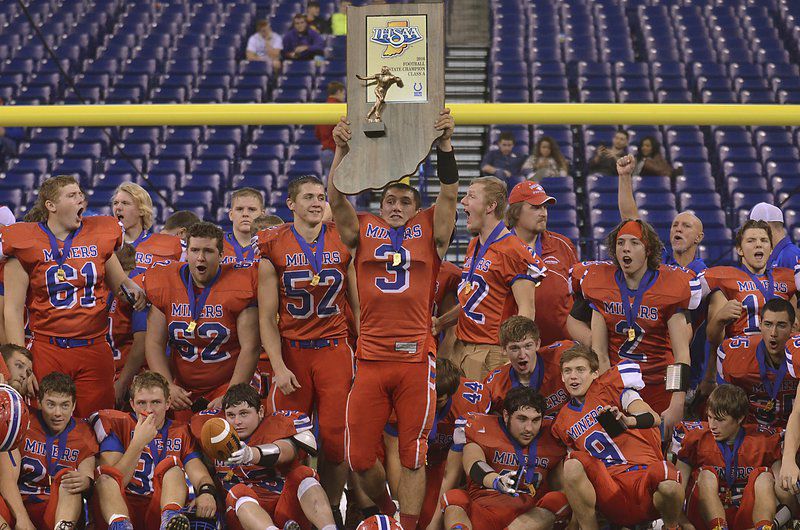 Tribune-Star file/Joseph C. Garza Pulling away: Linton quarterback Tyler Meurer scores on a 5-yard run in the fourth quarter of the Class A state championship game against Pioneer on Nov. 26, 2016 in Lucas Oil Stadium.

Choosing a favorite venue to watch high school football for this Daily Top 5 involves a lot of different criteria, some of which change from place to place.

It's an entirely subjective exercise, in other words, with a considerable amount of aesthetics involved. (And if you're one of those people who think that football and aesthetics don't go together, I'm not sure we can be friends.)

High school football in Indiana finishes its season in a prestigious place, so that's included. Venues in which the team I'm covering is the home team are not, although I'm obviously a huge fan of the longstanding facilities at Casey (the Warriors' football pressbox was still pretty cool the last time I was in it) and I like teams that play afternoon games (go Dugger Bulldogs).

Why afternoon games? Well, there's no deadline pressure, so I can remain on the ground along the sideline. And if it's postseason play, day games are generally — but certainly not always — warmer.

Being on the ground is a reflection of the fact that the number of stairs is often a crucial part of my enjoyment of the game and ability to do my job. But again, there will be exceptions.

Venues I've seen the most often were those in the Metropolitan Interscholastic Conference (although somehow I was fortunate enough to avoid football at Warren Central), now those in Conference Indiana (Bloomington South and especially Columbus North would be pretty good if located in easier-to-reach cities) and the Western Indiana Conference (no favorites here, although I'd like to avoid Indian Creek for the travel reason).

Random nonconference games have taken me to places including Indianapolis Arlington (for Cathedral games), Indianapolis Northwest (not real sorry to see that school go), Princeton, Bedford and Vincennes (not many stairs here), and I visited Jasper for a playoff game last fall. I've also seen most of the Southern Indiana Athletic Conference with particular noting of Castle positively (not many stairs) and Evansville North negatively (a practically new facility with an elevator, except nobody's allowed to use it).

Illinois playoff games have been almost exclusively in the afternoon, although Martinsville's trip to Virden (the Bluestreaks had 18 players, Virden was ranked something like second in Class 2A before being moved down for the playoffs) provided a lovely, snowy evening — aesthetics, remember — and a heck of a game. Maroa-Forsyth and Auburn are apparently somewhere near the North Pole and with nothing to block wind, but Christopher was just mildly chilly and Atwood-Hammond was bathed in sunshine (coincidentally, for another game involving the Bluestreaks).

5. Enlow Field — I'd like to include the Reitz Bowl as my Evansville representative, but I haven't been there since a Verbie Walder ISU game more than 50 years ago.

Enlow, home of the Bosse Bulldogs, is very, very old, with an imposing brick facade (but artificial turf, of course). I didn't have to use the pressbox, so I may have dodged a negative.

4. Flora — This Little Illini Conference field is an example of what timing can do for you. Although it's hard to get to — and even finding Flora itself isn't the final piece of the puzzle — it had a brand new, wonderful pressbox with a gently sloping stairway in 2018.

3. Mt. Carmel — Here's the exception to the rule of stairs, because there may not be a facility that has more. But coolness wins for the Golden Aces.

The school is at the top of a hill (or at the edge of a former coal mine?). The football field is at the bottom, several hundred feet below it seems, and the bleachers are on the hillside.

But you can avoid all that. There's a small set of bleachers, parking, a concession stand and even the pressbox on the visitors' side. Following the kids up the stairs to the locker room is kind of a pain, though.

2. St. Joseph-Ogden — The Spartans have often been a nemesis for Wabash Valley teams, but not in a 1999 playoff game against Casey.

The Warriors had a stocky little running back whose name escapes both me and the internet, and he bowled over the home team's defenders in a punishing display during a 34-21 win. The weather was warm and sunny, just about a perfect afternoon.

But this venue is ranked this high because of one of Casey's offensive guards, who was immortalized that day in a bigger-than-life-sized poster on the Casey sideline. More details available on request, but not in the paper.

1. RCA Dome (NOT Lucas Oil Stadium) — Even though Bob Irsay's people once made me walk up several flights of stairs (with a sprained ankle, no less) because the Indianapolis Colts' owner wouldn't ride the elevator with strangers (no doubt worried about hitmen), and even though I saw both South Putnam (2002) and Rockville (2007) lose high school state championship games here, this is a favorite venue.

LOS? Yes, elevators are plentiful and there's lots of space for high school championships. I even watched Linton win here a few years ago.

But it's too high. The pressbox is almost as far above the field as Mt. Carmel High School is.