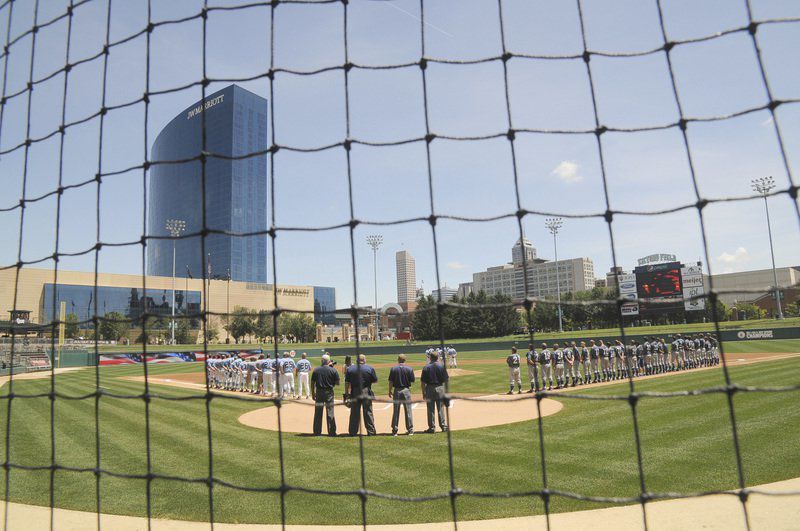 Tribune-Star file/Bob PoynterAnthem: Shakamak and Rockville players and coaches stand at attention during the National Anthem at Victory Field prior to the 2014 Class A state championship baseball game. 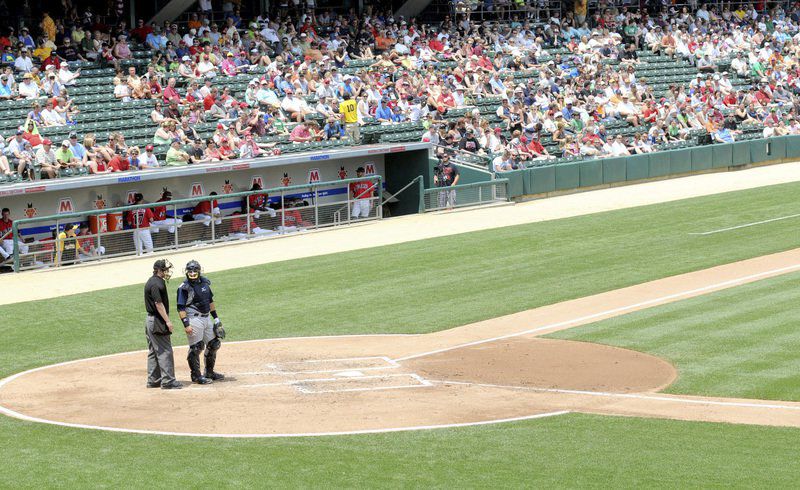 Tribune-Star fileUmp: Josh Phegley chats with the umpire between innings of the Charlotte-Indianapolis game at Victory Field several years ago while playing for the Charlotte Knights in the Chicago White Sox organization.

Tribune-Star file/Bob PoynterAnthem: Shakamak and Rockville players and coaches stand at attention during the National Anthem at Victory Field prior to the 2014 Class A state championship baseball game.

Tribune-Star fileUmp: Josh Phegley chats with the umpire between innings of the Charlotte-Indianapolis game at Victory Field several years ago while playing for the Charlotte Knights in the Chicago White Sox organization.

Baseball venues are the topic for this Daily Top 5, a couple of which — had this been a normal spring — I'd have visited recently.

Baseball is the most traditional of sports — or at least it used to be, don't get me started — so as I look down on my list I'm actually a little bit surprised that a couple of these may have been built in the 21st century. There are reasons for their inclusion, but the top three on the list are decidedly more mature. Sadly, the top choice is an epitaph.

Another factor: being able to sit behind the plate. Baseball is all about the battle between pitcher and hitter, and being unable to determine what pitch is being thrown, how hard it's being thrown and where it's located is a critical factor.

5. Duffy Bass Field — I was traveling with Indiana State as scorebook keeper, bench jockey and occasional batting practice pitcher at least 50 years ago, back in the Conference of Midwestern Universities days, so it kind of pains me to recognize the old Redbirds' coach. I really liked Itchy Jones at Southern Illinois, even though the Salukis kicked our butts with mind-numbing regularity, but I thought Duffy was just old and cranky (don't tell Stan Petty this). We had much better success in Normal than in Carbondale, including a key extra-base hit to the gap by Steve Songer to clinch one series win.

But, even though I know Ace Hunt and Tim McCaughan are working feverishly to get that pressbox elevator installed at Bob Warn Field (and now I can't stop wondering what the Andy Amey wannabes from Illinois State a few decades ago think about that name), here's what's good about Duffy Bass Field.

You walk through the gate, you show the guy your press pass, you ask how to get to the pressbox and he tells you, "Right through that door" which is literally 10 feet away, maybe less. The fact that I saw the Sycamores win a big game there last spring (and then return without me to win the Missouri Valley Conference tournament there too) is another plus, but I think below-ground baseball should be the future. Not sure how the drainage issues work, but I loved a field like that in Portland, Ore., and I'm pretty sure that city gets a little rain.

4. Victory Field — I'm not sure how old this place is. It seems to have been around a long time, yet it still looks sparkling and fresh whenever I get a chance to go there. Beautiful ballpark. Spectacular vista. Major-league quality. And, another plus, a little quirky with that 400-foot-plus death valley in left-center that I will always insist demoralized Riverton Parke in one state-finals game I witnessed.

Continuing the list of pluses: when I go there for state-finals games, the guys from the Indiana High School Athletic Association let me sit wherever I want, which means behind the plate and not in the pressbox.

The minus? No matter how old, it's too new.

3. Alvin C. Ruxer Field — Quibbles? Finding a parking place can be an adventure, the pressbox may be ready for expansion (although, in its defense, it is directly behind the plate) and there aren't enough tables at Schnitzelbank to accomodate everybody between games. Biggest quibble? A lot of times when you go there, you have to play Jasper.

But, because you are a baseball fan from southernish Indiana, you already knew I was talking about Jasper. A jewel of a ballpark, site of legendary long balls hit by Scott Rolen and Matt Mauck (Shakamak's Patrick Green too), and some gracious hosts like radio veteran Walt Ferber and longtime coach Terry Gobert who will tell you how well you played after the Wildcats have routed you.

2. Bosse Field — Probably even older than Ruxer Field (and sometime I've got to get to Huntingburg for a game to see the other "League of Their Own" ballpark). It is, in fact, probably the oldest park I've been in, and with some quirks to boot.

Hot, sweaty, steamy, dusty? Perfect, and it gets the tiebreaker over Ruxer Field because it's another place where the pressbox is optional and seats behind the plate are plentiful.

1. Loeb Stadium — RIP is appropriate for this great old ballpark, which is being "renovated" — torn down and rebuilt — as we speak.

Old? Check. Pressbox? Dreadful, which is why no sane person would ever sit there. Even with the caveat that you have to navigate a little bit of Lafayette to get there — and parking is catch as catch can — it was No. 1.

Games I watched there included the Terre Haute North state championship game in 1974, with Gary McCabe removing most of the doubt about the outcome with a first-inning homer into the parking lot of the frozen custard stand beyond center field and with my kids from Baesler's IGA getting some garbage time; the 1979 semistate, with two nail-biters involving an upstart South Vermillion team; and one more game that deserves paragraphs all its own.

Semistate, 1976. Sullivan vs. Kokomo. Pat Underwood, already chosen in the major league draft, for the WildKats. Charley Noble, an arm injury away from the majors himself, for the Golden Arrows. Sandy Koufax vs. Sandy Koufax, basically: two left-handers with unhittable fastballs and unhittable 12-to-6 curveballs. Awe-inspiring.

That's why you sit behind the plate.