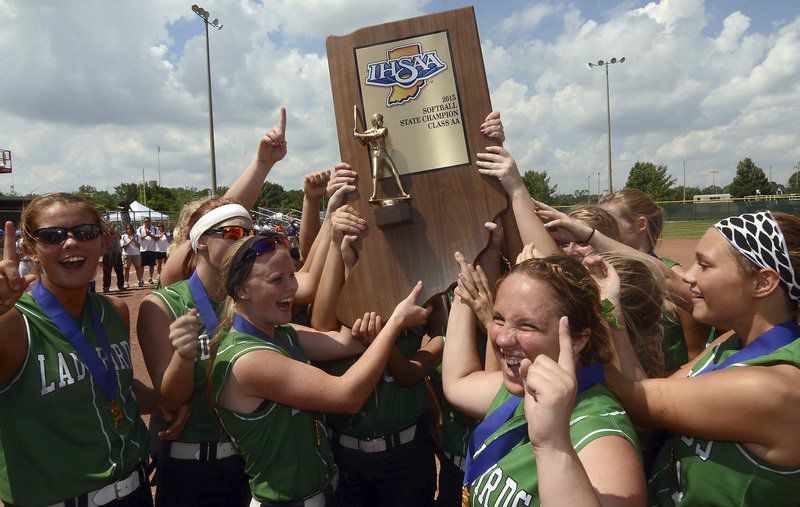 A little something for the trophy case: Members of the North Central softball team celebrate after they were handed the Class 2A state championship trophy in 2015 at Ben Davis High School in Indianapolis. The Thunderbirds defeated Boone Grove 3-0. 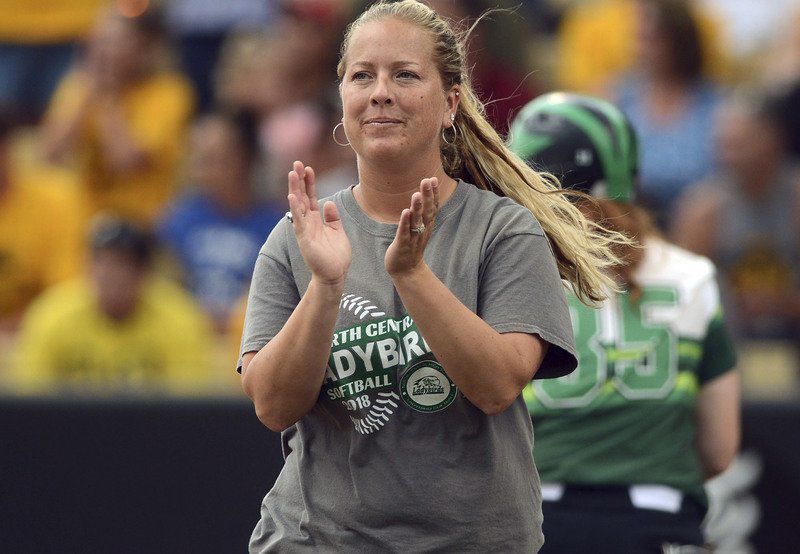 Let's go Thunderbirds: North Central coach Erica Arnold encourages her players as the Thunderbirds bat against Pioneer during the 2018 Class A state softball championship at Purdue.

A little something for the trophy case: Members of the North Central softball team celebrate after they were handed the Class 2A state championship trophy in 2015 at Ben Davis High School in Indianapolis. The Thunderbirds defeated Boone Grove 3-0.

Let's go Thunderbirds: North Central coach Erica Arnold encourages her players as the Thunderbirds bat against Pioneer during the 2018 Class A state softball championship at Purdue.

Picking from among the high school softball venues I've enjoyed is almost exclusively a postseason exercise.

In the spring, there are so many different sports going on that softball road games don't always get covered, and the best regular-season tournament around is right in town.

Class 4A sectionals often take me out of town, but the sectional partners of Terre Haute North and Terre Haute South have nothing special in the way of accommodations.

I've been to Boonville for a semistate, and that's a town with a softball tradition. But pretty much all I remember, in a tournament that included two of my teams, was a pair of shutouts by Stacey Newlin as Turkey Run beat Shakamak and Evansville North on its way to the 1996 state championship.

A regional at Brown County six years ago was pleasant enough, thanks to West Vigo beating nemesis Edgewood in the game I attended but, as you already know, it was at Brown County. Outcome can become a tiebreaker in this Daily Top 5, but so can ease of travel (and the ever-important seat behind home plate).

So here's the list. The fact that our most recent pictures are of the North Central Thunderbirds is purely coincidental, although it partly determines the difference in the top two spots.

5. Winslow Sports Complex — I've been here a couple of times when Bloomington South hosted Conference Indiana tournament play, and it's a place where four games can be played simultaneously and the single pressbox in the center can provide access for any of them. One of the fields has its left field downhill from third base, but the other three seem normal enough.

Driving to Bloomington is 75% as bad as driving to Nashville, however.

4. Fairview Park, Casey — The most traditional of Wabash Valley softball fields, as well it should be.

I haven't checked out either of the softball museums in the park, but I've watched many games there. Pressbox is small, but I always preferred sitting on the walkway in front of it — making sure to stay out of the way of J.D. Spangler on the radio — where I was literally looking over the shoulder of the plate umpire.

An added bonus, back in the days when Denny Throneburg was still coaching the Warriors, was that most games were done in about an hour.

3. Cherry Tree, Carmel — A former site of state-tournament games, this complex is both hard to find (notice the address) and without a suitable pressbox. The last time I was there, Chris Pruett and I had to sit at tables along the first-base line.

But it was for Turkey Run's last two games in 1996, including the win over defending state champion Center Grove ("They can take those class sports and ..." said co-coach Keith Newlin), so I can't drop it any lower.

2. Bittinger Stadium, Purdue — Apparently the state championship games are going to stay here, and that's fairly OK. The pressbox is very good and directly behind the plate and the other amenities are nice.

Location is a bit of a problem, particularly since all the good food places are in downtown West Lafayette (making it easy to get to, harder to find your way home). And my only trip there so far wasn't pleasant for the Thunderbirds.

1. Ben Davis — Prior to Purdue, the finals were here on the west side of Indianapolis for more than 10 years. Nice pressbox, not hard to find (navigating the 1,000-acre Ben Davis campus is the trickiest part).

The best part? Several teams from the Wabash Valley have been there — I have a T-shirt that probably has the names of 60 girls I know on it — and some have won, most recently the 2015 T-Birds.