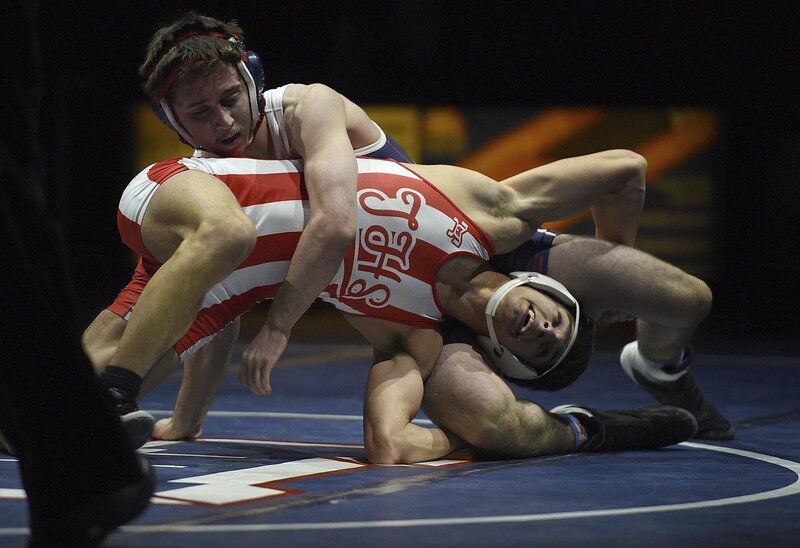 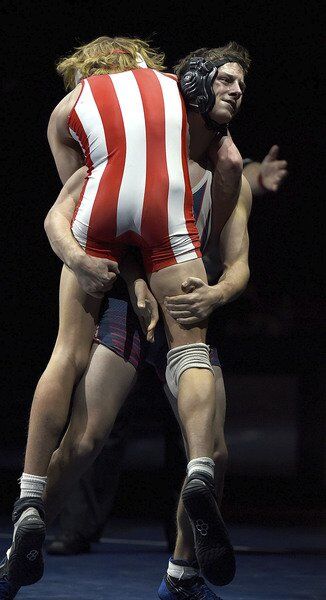 In the spotlight: Terre Haute South's Luke May tries to pin North's Kaden Medley during their 120-pound match Tuesday at North. 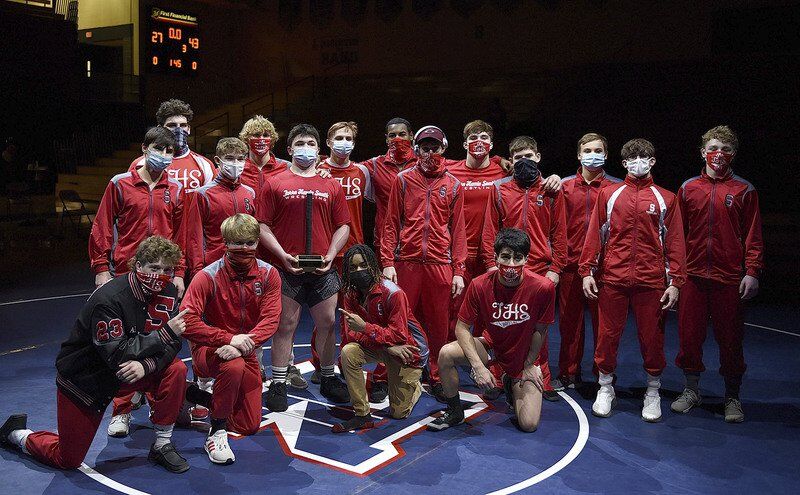 The Hammer goes to the Braves: Terre Haute South senior Josh Hollowell holds The Hammer during a team photo after the Braves defeated North on Tuesday at North.

In the spotlight: Terre Haute South's Luke May tries to pin North's Kaden Medley during their 120-pound match Tuesday at North.

The Hammer goes to the Braves: Terre Haute South senior Josh Hollowell holds The Hammer during a team photo after the Braves defeated North on Tuesday at North.

Visiting Terre Haute South kept the Hammer for its high school wrestling victory over host Terre Haute North on Tuesday night, unofficially the fifth straight year and 12th in the last 14 seasons that the Braves have had it.

But the Patriots are getting a lot closer.

Tuesday's final score was 43-27, with North winning some of the close matches it lost a year ago when the score was a very deceptive 58-6.

"We have a very good team, very easy to coach," said North coach Beau Pingleton afterward. "I was disappointed with some of the results, yes, but I was happy with them from top to bottom . . . and we get to face [the Braves] again Saturday [in the Conference Indiana championships at Southport]."

"I felt like we could've won a couple more [individual matches]," said coach Gabe Cook of the Braves. "We need to stay a little more solid, especially on top, instead of giving up five-point moves."

South won the first two matches for 9-0 lead, but both were close. North's Jack Dailey had picked up his second takedown of the match against Walker Forsythe at 152 to tie the score 6-6 with less than a minute to go, then elected to allow Forsythe to escape so a takedown could win. Instead it was Forsythe who got not only a takedown but parlayed that move into a pin, and South's Alex Rose followed with a 7-4 win over Patriot veteran Nicolas Sconce.

North countered with second-period pins by Sammy Saunders and Gabe Bignell to take a 12-9 lead, but South took the next seven matches to clinch the outcome.

Nick Casad, all-stater Josh Howell and Christian Verst all pinned, giving the Braves a 27-12 lead; freshman Josiah Dedeaux overcame an early 6-0 deficit — with the help of two of those five-point moves his coach had lamented — to win at 106 pounds; Justin Pemberton got a forfeit win; and the May brothers both won by decision, Luke with a thriller — won by another five-point move — over Kaden Medley and Harrison with a major decision.

North won the last three matches. Dawson Flak got a five-point move — reversal, then near fall — to come from behind against A.J. Sauer, gave up the lead, then rolled Sauer to his back for a pin; Ethan Proffitt got the quickest pin of the night to win at 138; and Brandon Greene overcame an early 6-2 deficit to defeat Jorge Franco 9-8, riding out the last period to preserve that one-point lead.

"I was real happy with our 106-pounder," Cook said afterward. "[Dedeaux, a first-year wrestler] just entered our lineup [and got a reversal-near fall combination to get within 6-5, then a takedown-near fall combo for the last five points of his 12-8 win]."

"I was happy with our seniors — Gabe Bignell, Jack Dailey and Brandon Greene," Pingleton said. "They didn't all win, but they all had good performances [on Senior Night]; I'm glad they had a quality dual for their last match at home."

South wrestled without two of its veterans, Nate Recknor and Nate Lommock. "We expect them back soon," Cook said.

"Coach Cook is obviously doing a great job," Pingleton said. "He sets a great example of how you run a program. I'm impressed with their team, and I look forward to our team being [at that level] someday."