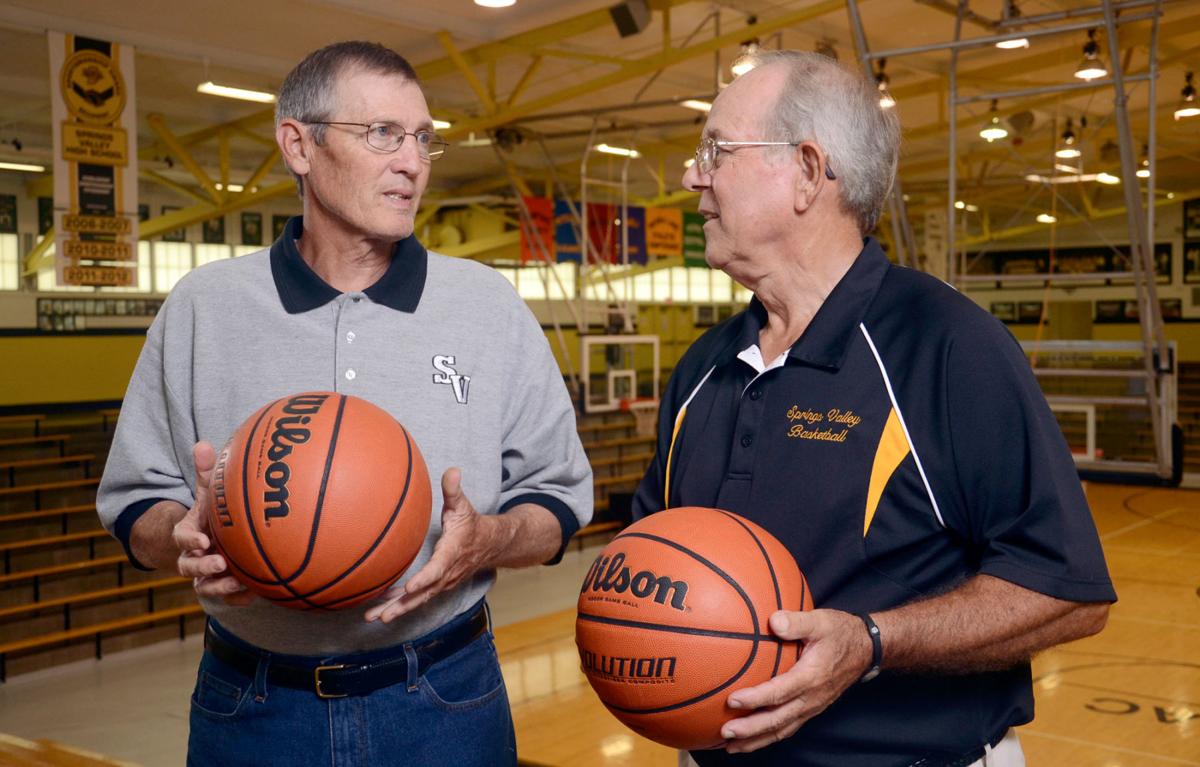 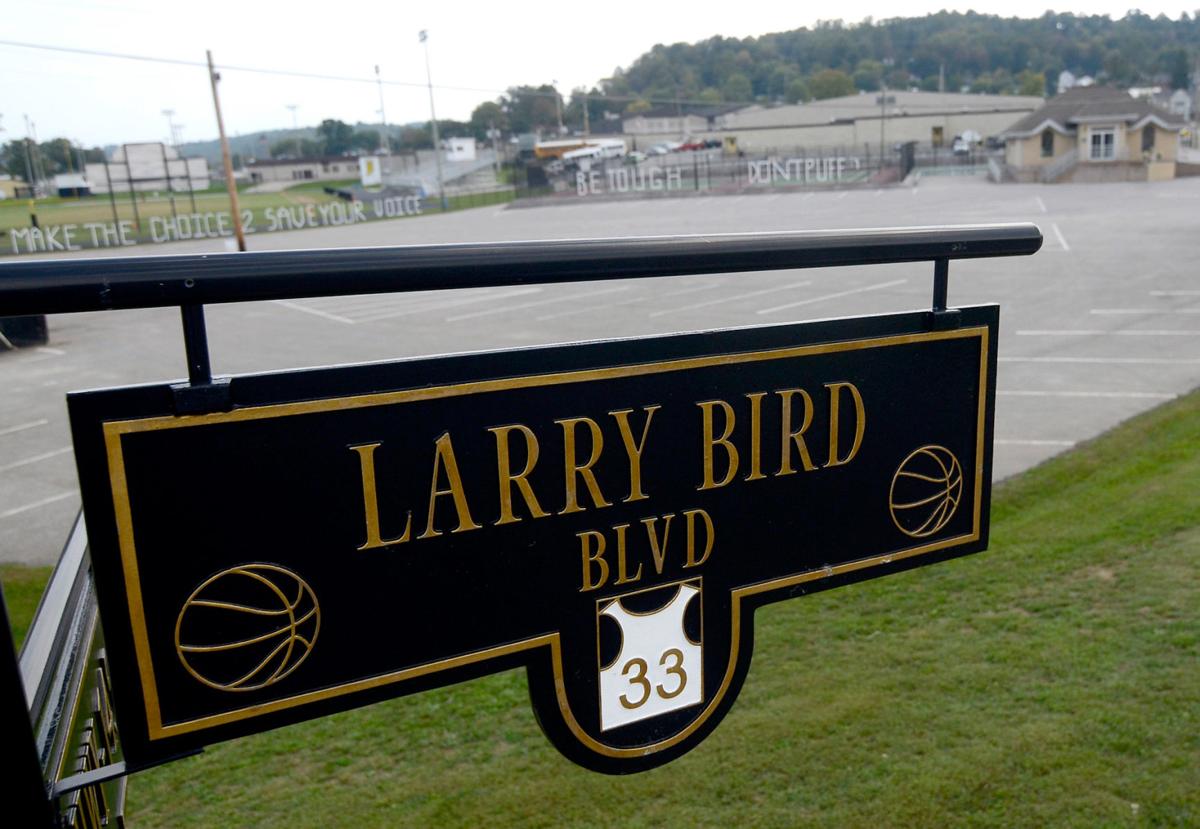 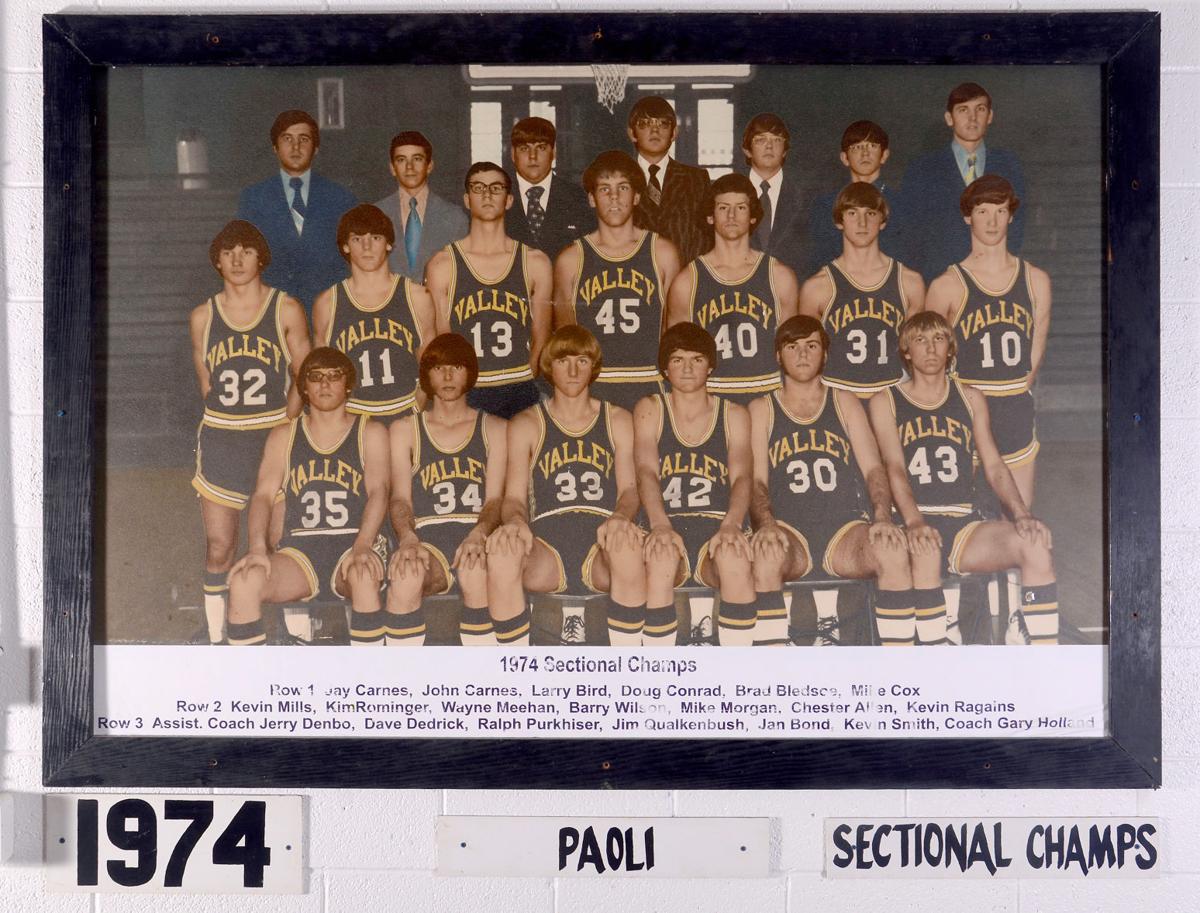 Tribune-Star/Joseph C. Garza Sectional champs: This photo hangs in the Springs Valley High School gymnasium to celebrate the Blackhawks' sectional championship in 1974. Larry Bird is seated in the front row, third from left. 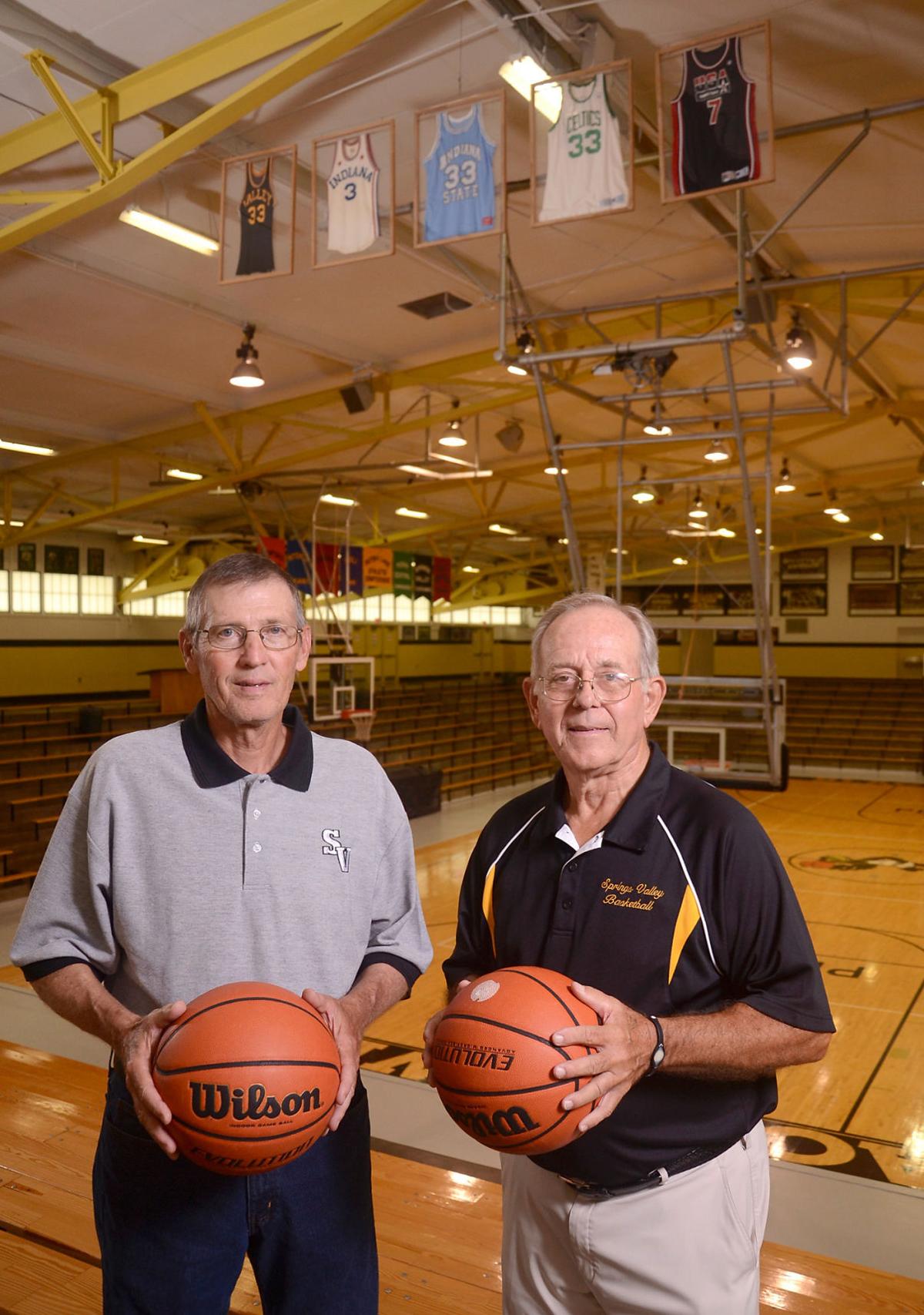 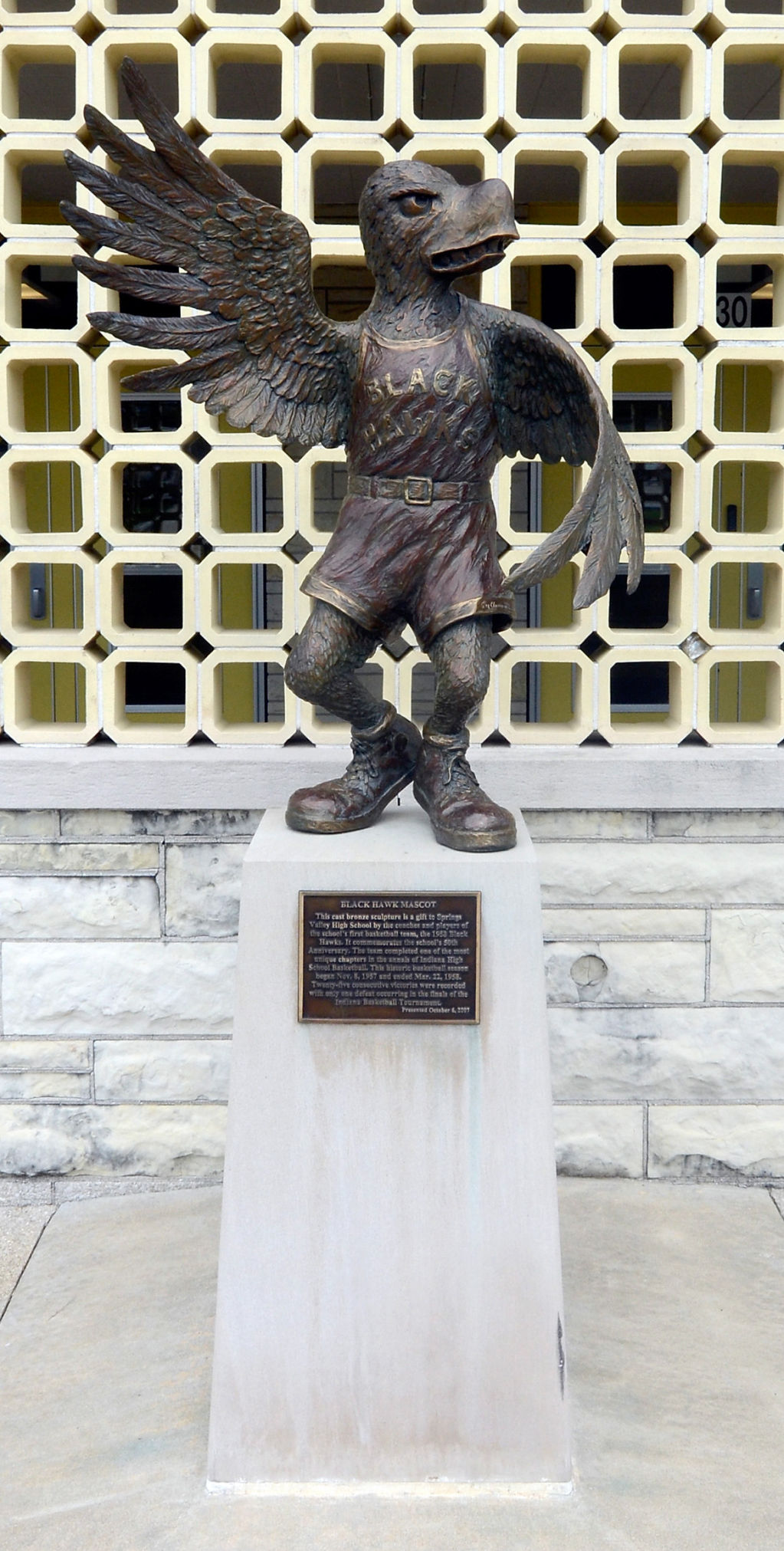 Tribune-Star/Joseph C. Garza Sectional champs: This photo hangs in the Springs Valley High School gymnasium to celebrate the Blackhawks' sectional championship in 1974. Larry Bird is seated in the front row, third from left.

Larry Bird is not the only small-town Hoosier basketball success story.

But his rise to legendary status makes his the biggest.

Bird’s ascension to stardom at Indiana State is the essence of what March Madness is today. He may have come out of nowhere in the minds of basketball fans around the nation, but those native to Southern Indiana’s Orange County and the surrounding area — and really any pride-filled Hoosier small town — would disagree.

While he is better known for thriving under pressure in his NCAA championship battle with Magic Johnson of Michigan State, or the Eastern Conference and NBA Finals showdowns of his pro years, Bird learned to excel on that stage while playing for rabid fans of the Springs Valley Blackhawks in French Lick.

Hardwood battles with larger rivals such as Washington and Jasper or tradition-rich Loogootee blended in with county rivals Orleans and Paoli each season. The challenging caliber of play in the area was evident as Bird improved year-to-year.

Facing talent like Orleans’ 6-foot-7 Curt Gillstrap and Milltown’s Dave Smith, both of whom earned scholarships to play for Louisville, Bird went from one of Springs Valley’s key players to the Blackhawks’ star who outshone Gillstrap in head-to-head battles as a senior.

And talented basketball players were also in Bird’s own family. Three years older than Larry, brother Mark Bird was known as a great shooter at Springs Valley. The oldest of the six Bird children, Mike, also played for coach Jim Jones, who would later coach Terre Haute North Vigo’s Patriots.

“That really provided him a tremendous amount of competition. He was very competitive, really had a will to win,” Jones said. “Those things just began with the brothers and carried on right through his career.”

Like most kids, Larry Bird began playing basketball early in childhood. With each success, his passion to improve seemed to grow.

Bird was a junior varsity contributor as a freshman. Then, as a skinny sophomore, he broke his ankle in the first game of his JV season.

After he healed and returned to the team in February, he earned a spot on the varsity postseason roster. Gary Holland, who was Springs Valley’s assistant coach at the time, said Bird continued to practice shooting while using crutches to prop himself up.

“He hobbled and hobbled, and wanted to play so bad. He had to run what we called a Death Valley suicide in enough time to be able to play, and eventually he did,” Holland said. “He came back in the sectional game and hit a couple big free throws. That really sparked him.”

It was a moment in his life that Bird would later write about.

“From that point on, basketball was all I thought about, all I wanted to do,” Bird recounted in his autobiography “Drive: The Story of My Life.”

“I couldn’t wait for school to let out for the summer so I could play ball. I would duck into the gym in between classes to get a few shots up and play again after school into the early hours of the next morning, feeling that sleep was a rude intrusion on my practice time.”

Jones was able to witness Bird’s obsession to improve up close.

“He didn’t have any other activities. He loved basketball and understood it,” Jones said. “[He] spent a lot of time at it. That’s probably the one area you see kids not willing to do today. A lot of wannabes but not a lot of doers.”

Bird would become a starter as a junior after an offseason spent of working on the fundamentals and playing extensively.

“Coach Jones is the man I have to thank for drumming basketball fundamentals into my head,” Bird wrote in “Drive.”

Bird is often regarded as one of the few guys who made everyone around him better on the basketball floor. That ability first showed itself in his junior season as he showcased his talent for passing, which he had developed during his time away due to injury.

“His passing, from that sophomore to junior year, just became unbelievable. The vision, seeing the floor was just remarkable,” said Tony Clark, a senior at Springs Valley when Bird was a junior.

Clark said Bird must have averaged five assists per game to go with nearly 10 rebounds.

“He was always passing, rebounding, [and was our] second-leading scorer. Of course our scorers were close,” Jones said.

But no one was working harder than Bird.

“Basketball was king and you worked on that year ’round,” Clark said. “Between that sophomore and junior year, even between the freshman and sophomore year, he’d be playing on the elementary school playground courts. When other people were thinking of dating and girls, he’d be up there in the rain shooting baskets,” Clark said.

Clark was a 6-5 center on the team, while Steve Land was another 6-5 big man on that squad. Bird was essentially a 6-3 small forward and one of five double-figure scorers on a Springs Valley team that went 19-3 after a loss in the sectional.

Former Sycamore coach Bill Hodges, an assistant at Tennessee Tech at the time, recalls seeing Bird play as a junior when he was recruiting the 6-7 Gilstrap. Hodges was among the majority of programs that weren’t interested in Bird’s potential … yet.

“He was a good player — he was a ‘tweener’ — but you don’t jump out and start recruiting a 6-3 wing player,” Hodges recalled. “I liked their [point guard] Danny King [and] eventually ended up recruiting him to Indiana State [from junior college].”

Bird transformed himself into one of the state’s elite players before his senior year thanks to continued work on his game, some weightlifting and a growth spurt of nearly a half foot.

Jones gave up coaching duties at the start of Bird’s senior year but remained at Springs Valley as athletic director and guidance counselor. Holland, who just a few years prior had been a two-year letterwinner at Louisville, took over as varsity coach.

“He was an above average player with a lot of talent and here I am 25 or 26 years old,” Holland said. “Jones’ [style] was 20 passes and a layup. I was ‘let’s get out and go.’ It wasn’t a coaching miracle or nothing like that, but it fit Larry’s style.

“I knew Larry was playing in between his junior and senior year on the outside courts, was growing and getting better, but I had no idea he was going to be the player he would be,” recalled Holland.

The town was still feeling the pain of the sectional loss from the previous year, but Bird made that seem like ancient history with some outstanding individual performances. Basketball fanatics around the state began to hear about a 6-7 guy named Bird who played like a guard.

High school basketball fans all around the area were flocking to see Bird play.

“Our gym holds 2,700 people. Loogootee came here and both were undefeated. I think there was probably 5,000 people in the gym,” Weikert said. “They were sitting up by the window ledges. It was the game of the year. I think we got beat. If the fire marshal came, it would have been tough to run ’em out. They wanted to see a ballgame.”

Bird, now the one drawing the top college coaches into the area, took Springs Valley to the sectional crown. The Blackhawks won a first-round regional game but could not fend off the Bedford Stone Cutters in the regional final, falling a game short of the Sweet 16.

“I wished I’d have had more experience,” Holland said. “We had Bedford beat, but couldn’t hit our free throws and got beat. All the stuff that Jones and I did down through the grades just seemed to blend in and fit his personality perfect.”

Jones, who has returned to live near Springs Valley after climbing Indiana’s all-time wins list after many years at Terre Haute North Vigo, said Bird’s one-year improvement was his physical tools catching up to a complete understanding of basketball.

“He just became much bigger and stronger. He always had the qualities,” Jones said. “He thought the game just a little bit higher. I don’t know why, God-given or what. He just always had a feel for the game. It’s something you don’t teach. He just really understood the game.”

Holland had the pleasure of coaching an Indiana All-Star who brought Louisville’s Denny Crum and Indiana’s Bobby Knight to French Lick. Bird made a popular choice when he chose the Hoosiers, but he left Bloomington after just a few weeks on the IU campus.

Bird worked for the city sanitation department during his year away from school and played AAU basketball — building confidence against many of the current college standouts from IU and other schools.

Bird kept close ties with his hometown, after his ISU career and as he began his professional career with the Celtics, returning home during the offseason and giving back to the people who supported him as a youth.

“Larry, when he would sign endorsement contracts, the school was always included for part of it,” Weikert said. “Kids had free shoes for many years. Basketballs came thanks to Larry.”

The Bird children faced adverse conditions at times growing up, but Clark said very few families in the area had money at that time.

“It made him appreciate the money he earned later on in life. At that time, Orange County was either the lowest or second lowest in the state in per-capita income. Even though you didn’t have money then, you didn’t realize it. It was a happy life,” Clark said.

Some see the best in people around them. When it comes to basketball, Bird has always put himself and those around him in a position to succeed.

“His vision,” Clark said. “As a basketball player, he saw the court like no other player. That, along with his work ethic through high school college and pros, made him the great basketball player he was.

“Now, I think that vision is a little different from the standpoint he now sees things in players [that] other general managers don’t see. He sees the bits and pieces of guys and fits them together. I would almost call him a visionary.”

Still an ISU, Larry Bird fan after all these years

Filling our void: Terre Haute artist Bill Wolfe poured his heart and soul into the project of a lifetime

Legendary gathering: Larry Bird returns to arena where he made his name