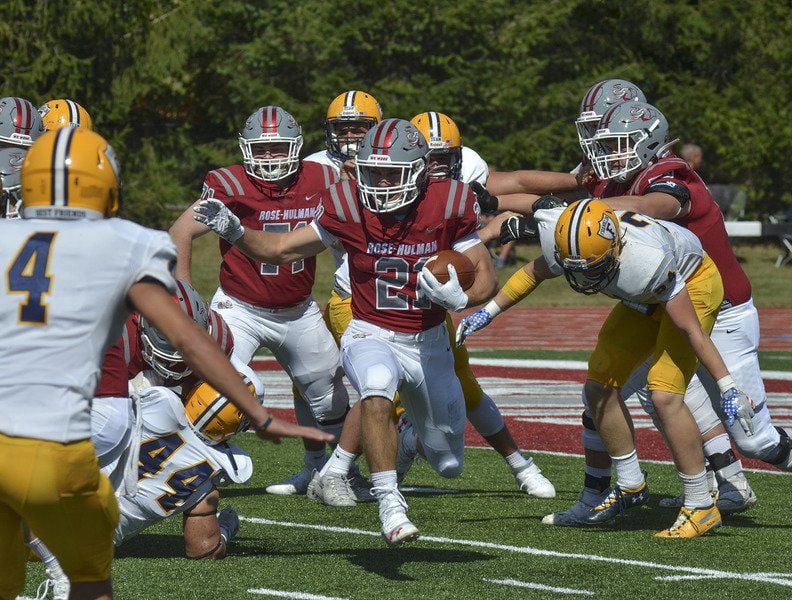 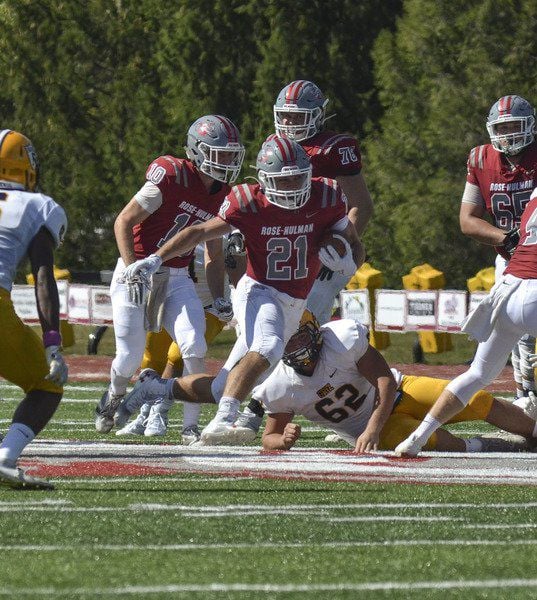 Off and running: Rose-Hulman running back Garrett Wight (21) cuts up the field during the Engineers’ homecoming game against Franklin College on Saturday.

Off and running: Rose-Hulman running back Garrett Wight (21) cuts up the field during the Engineers’ homecoming game against Franklin College on Saturday.

Anyone who thinks NCAA Division III athletes don't take games seriously because they don't receive athletic scholarships should have witnessed the aftermath of Saturday's Franklin vs. Rose-Hulman football showdown, which highlighted the Engineers' 2019 homecoming weekend.

Mount St. Joseph and Hanover also were 1-0 coming in and both won their Saturday games. So first place in the conference and a chance to advance to the Division III tournament at the end of the season are at stake.

Saturday's contest — played in front of a large crowd at Cook Stadium — was close throughout. But the visitors scored a touchdown with 38 seconds left to pull them within 28-27. Then the Grizzlies went for a 2-point conversion and their quarterback, Braden Smith, converted it to put the home team behind 29-28.

After the Engineers were unable to march into field-goal range in the final 38 seconds, Rose-Hulman players hugged their parents, siblings and teammates in emotional states of disbelief. Several had tears in their eyes.

Even though these athletes attend Rose to earn degrees that will help them land prestigious jobs someday, one could tell that they really, really cared about football Saturday.

But last Saturday is in the past and the Engineers (2-2 overall) must travel to Bluffton, Ohio, this Saturday for their next HCAC challenge. Their season is not over because of the Franklin loss and there's nobody better to remind them of that than senior running back Garrett Wight.

One of the best players on Rose-Hulman's roster, the 6-foot, 190-pound Wight leads the team in rushing yards with 346 and rushing touchdowns with seven. He ran for two of his TDs in the second half against Franklin.

Against Manchester two Saturdays ago, Wight rushed for 147 yards and caught four passes for 104 additional yards, scoring a total of four touchdowns.

"He's a workhorse back," Rose coach Jeff Sokol mentioned. "He carries the ball for us a ton. He's got a great work ethic. He works hard. He runs hard. He's a brilliant two-time [Google Cloud/CoSIDA] Academic All-American."

But as Sokol noted after Saturday's loss, Wight is more than a talented player. He's one of the best leaders on a team that may really need one over the next few days.

"All the players really look up to him and respond to him," Sokol told the Tribune-Star. "Football means a lot to these guys. They work really hard at it."

"That's obviously a tough loss to handle," Wight said, reflecting about Saturday. "But if we win out, we definitely have a chance [of capturing the conference championship]. ... It's still in our hands."

The Engineers may need another HCAC squad to knock off Franklin in the next six weeks, so it's not totally in Rose-Hulman's hands. But piling up wins the rest of the way is essential.

"We've got to learn from our mistakes and get better as players, as a team and as a coaching staff and try to win every game every week," Wight stressed.

A three-sport standout in high school at tiny Williamsfield, Illinois, where he was valedictorian of his graduating class, Wight could have played DIII basketball somewhere, perhaps even at Rose. But he chose to continue his athletic career on the Engineers' football team while working toward a degree in mechanical engineering. He's minoring in robotics.

"I thought I had the best chance of contributing on a college team in football," explained Wight, a high-scoring point guard in high school.

By his sophomore year at Rose-Hulman, he was rushing for 1,036 yards and nine touchdowns. But he said a concussion forced him to miss two games in 2018, therefore his rushing total dipped to 738 yards and the team's record fell to an uncharacteristic 5-5.

Determined to turn things around in 2019, Wight worked hard on his body while working an internship in Greenfield over the summer. Coincidentally, he plans to make his post-college job choice later this week.

But Wight won't forget about football, no matter how many important life decisions come his way.

"We need to prepare for the game that week," he emphasized, "and take it week by week."