They're not singing Queen's 'We Are The Champions' but . . . : It's way too early to declare Rose-Hulman's football team the champion of anything, but the Engineers did knock off three-time defending HCAC champion Hanover 31-21 for homecoming Saturday afternoon at Cook Stadium. Here, Rose coach Jeff Sokol (far left, white shirt) and his players perform their traditional post-victory "Dear Old Rose," which is the official school song. 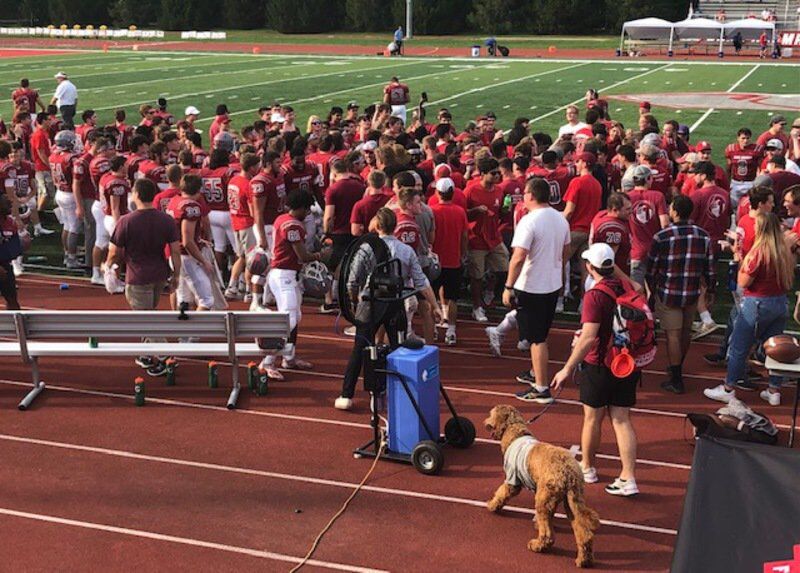 It's time to celebrate: Dozens of Rose-Hulman football fans and at least one dog storm the Cook Stadium field after the Engineers defeated longtime HCAC nemesis Hanover 31-21 for homecoming Saturday afternoon. 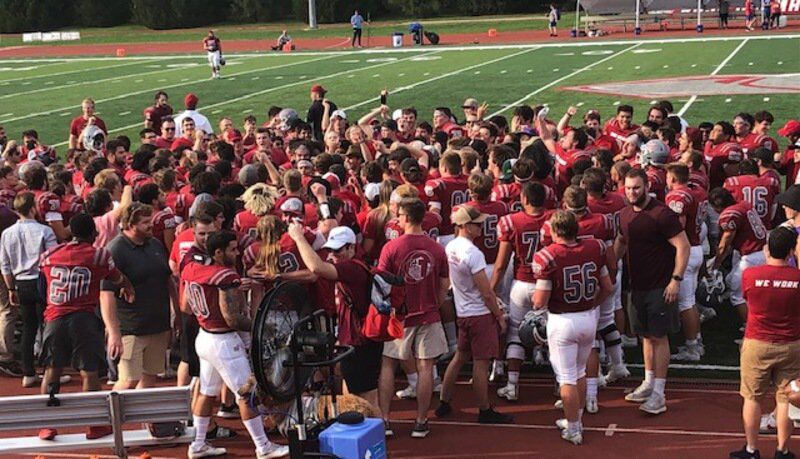 Homecoming hysteria: Plenty of Rose-Hulman fans join the players and coaches on the field as they took in the atmosphere of the Engineers' 31-21 homecoming triumph over Hanover on Saturday afternoon at Cook Stadium.

They're not singing Queen's 'We Are The Champions' but . . . : It's way too early to declare Rose-Hulman's football team the champion of anything, but the Engineers did knock off three-time defending HCAC champion Hanover 31-21 for homecoming Saturday afternoon at Cook Stadium. Here, Rose coach Jeff Sokol (far left, white shirt) and his players perform their traditional post-victory "Dear Old Rose," which is the official school song.

It's time to celebrate: Dozens of Rose-Hulman football fans and at least one dog storm the Cook Stadium field after the Engineers defeated longtime HCAC nemesis Hanover 31-21 for homecoming Saturday afternoon.

Homecoming hysteria: Plenty of Rose-Hulman fans join the players and coaches on the field as they took in the atmosphere of the Engineers' 31-21 homecoming triumph over Hanover on Saturday afternoon at Cook Stadium.

When Rose-Hulman’s football team rattled off 24 unanswered points in the second half against three-time defending Heartland Collegiate Athletic Conference champion Hanover on a warm, sunny Saturday afternoon at Cook Stadium, plenty of hopes and dreams turned into reality.

• Junior cornerback Tyce Miller intercepted the final pass by Hanover quarterback Matthew Weimer at the goal line as the scoreboard struck 0:00, stamping an exclamation point on a 31-21 homecoming victory and keeping Rose in a tie for first place in the HCAC standings.

Another juicy tidbit: Hanover is no longer part of that tie.

• Rose-Hulman fifth-year starting QB Andrew Dion, granted an extra season of eligibility because of the NCAA’s 2020 COVID-19 rule, was able to redeem himself for a pair of third-quarter turnovers that enabled the visitors to surge ahead 21-7.

• After Rose players and coach Jeff Sokol entertained the enthusiastic home crowd with their postgame rendition of the official school song “Dear Old Rose,” dozens of fans stormed the field to celebrate the homecoming triumph with members of the team. Side note, these fans were respectful enough to not tear down the goal posts.

• Rose-Hulman’s rally stopped the number of consecutive HCAC wins for Hanover at 14, dating back to 2018, and handed the Panthers their first road conference loss since Sept. 30, 2017, at Mount St. Joseph.

At least those were a few of the hopes that came true, although more probably existed.

After these talented NCAA Division III teams traded first-period touchdowns — Hanover on a 51-yard pass from Weimer to Jared Frank and Rose on a 3-yard scoot into the end zone by Shane Welshans — neither tallied in the second period.

The halftime score of 7-7 led spectators to believe this might turn into a defensive struggle. Although the defenses for both squads enjoyed their moments in the second-half spotlight, both offenses started to assert themselves in the third quarter.

One play after Hanover’s Kyle Treber picked off Dion and returned the ball to the Engineers’ 38-yard line, Weimer hooked up with Hunter Eads for a TD that catapulted the visitors on top 14-7 two minutes into the half.

Four plays into Rose-Hulman’s next possession, Dion fumbled while being sacked, resulting in Hanover’s Devonte Hardiman recovering at the Rose 34.

The visitors needed a whole three plays to strike paydirt this time, doing so on a 28-yard burst by Walt Ballinger to boost their advantage to 21-7.

Would the Engineers fail to beat Hanover for the first time since September 2017?

Not with an estimated crowd of 3,000 folks — including several who appeared to make the trip from Hanover on the visitors’ side of the stadium — eager to forget pandemics and political arguments for three hours on hand for Rose’s first homecoming football game since 2019.

Before the end of the third quarter, an untouched 13-yard touchdown run to the right by Grant Ripperda and a 37-yard field goal by Jonathan Oliger had pulled the home squad within 21-17 heading into the final 12 minutes.

Provided great field position after Rose-Hulman linebacker Kyzer Bowen rocked Ballinger for a 1-yard loss on a daring fourth-and-1 from the Panthers’ 34 late in the third frame, Dion went to work.

Six plays into the Engineers’ drive that started on the Hanover 33, they found themselves on the 3 and trailing by four points. On the seventh play, Dion rolled right and tossed a pass to an open Jailen Hobbs — probably the No. 4 receiver on Rose’s depth chart — in the right side of the end zone.

With 11:47 remaining in the contest, Rose-Hulman finally owned its first lead at 24-21.

But Hanover wasn’t going to let its various winning streaks disappear without a fight.

Midway through the final frame, the Panthers started a drive in their own territory and reached the home team’s 12. Threatening to regain the advantage, Weimer fired a pass into the right side of the end zone.

That’s where Rose junior safety Chaikou Sow — don’t try to pronounce his name unless you know him — intercepted it and returned the ball to the Engineers’ 42 with 4:33 left.

“[Sow] was in position and made the play on a ball that was underthrown,” Sokol said afterward.

“I was in a read coverage with the cornerback,” Sow explained. “There was an out route and a corner route [by the receivers], so I broke on the corner route. We have a great D-line and they made [Weimer] throw a bad ball and I was able to take advantage of it.”

Although the next Rose-Hulman possession ended with a punt, Hanover didn’t do much with its next few plays either.

Regaining possession on the Panthers’ 15 with 1:31 showing, Sokol’s squad appeared ready to run out the clock. A Dion kneeldown for minus-1 yards, a please-don’t-fumble 3-yard run by Welshans and . . . a 19-yard TD gallop by Dion, who had faked a handoff to Welshans, rolled left and noticed no defenders covering that side of the field until he approached the goal line.

Whether it was Sokol or Dion who made that call, that secret will remain with them and select team members they choose to share it with.

But even with a 31-21 cushion, Hanover still had 39 seconds left to try to score quickly and then try to scoop up an onside kick to lead to a game-tying field goal or a game-winning touchdown.

Fortunately for the Engineers, Miller’s goal-line interception sealed the outcome and triggered the on-field homecoming hysteria.

Statistically, Dion completed 20 of 36 passing attempts for 211 yards and one TD with two interceptions. But Sokol was more impressed with the way he shook off the third-quarter turnovers to rally the troops against an opponent that had been a thorn in the Engineers’ side in recent years.

“He’s a super-tough competitor who overcame some adversity,” Sokol told the Tribune-Star. “He helped deliver a big victory for us.”

The 11th-year Rose-Hulman coach also offered words of praise for the engineering institute’s fans, who formed an influential “12th man” Saturday when the Engineers needed it.

“It was an unbelievable crowd,” Sokol said. “They were into the game. I challenged them at the pep rally [earlier in the week] to be a difference [Saturday].

“I don’t think there’s any doubt they were a huge difference. A big shoutout to our crowd.”

“The atmosphere was great,” added Sow, who was surrounded by friends congratulating him after the game. “You can tell this is a place where people love football.”