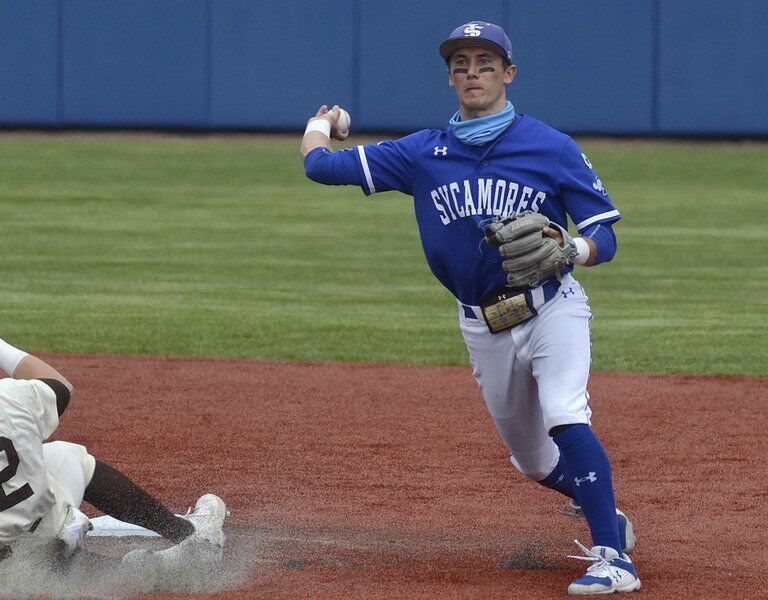 Trying for two: Indiana State's Jordan Schaffer throws to first to attempt a double play after forcing out Valparaiso's Matt Olive (left) at second base during a regular-season game at Bob Warn Field. 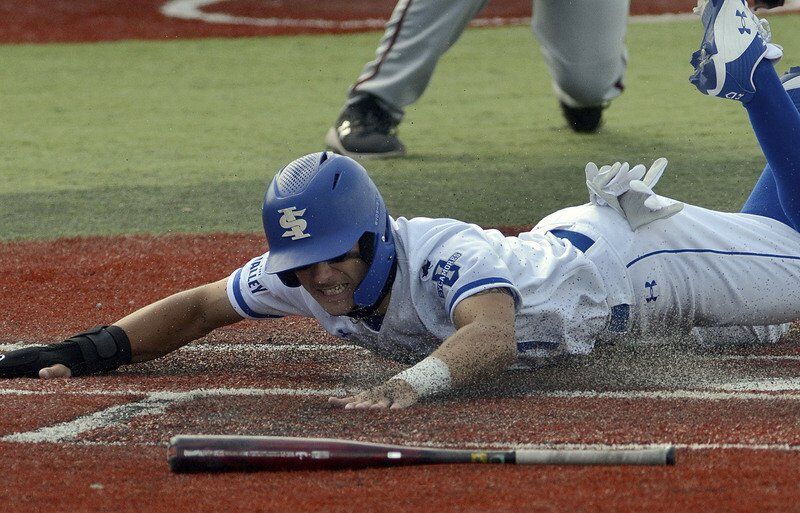 Winning run from No. 1: Indiana State’s Jordan Schaffer slides over home plate to score the Sycamores’ winning run during the team’s 5-4 victory over Southern Illinois on May 14 at Bob Warn Field.

Trying for two: Indiana State's Jordan Schaffer throws to first to attempt a double play after forcing out Valparaiso's Matt Olive (left) at second base during a regular-season game at Bob Warn Field.

Winning run from No. 1: Indiana State’s Jordan Schaffer slides over home plate to score the Sycamores’ winning run during the team’s 5-4 victory over Southern Illinois on May 14 at Bob Warn Field.

The fun of tournament college baseball are the different heroes it produces on a given day.

For Indiana State, it's tournament baseball cup runneth over in a fun and somewhat unexpected 2021 NCAA regional season, the first time ISU has gone to baseball's big dance in consecutive seasons since 1987.

Counting the Missouri Valley Conference Tournament, the names roll easily off the tongue when it came to one or two-game ISU heroes. Geremy Guerrero, Ellison Hanna II, Max Wright, Will Buraconak, Sean Ross, Matt Jachec, Brian Fuentes, Tyler Grauer, Grant Magill, Zach Frey and Miguel Rivera? All had their moments in the sun — many of them quite bright indeed.

However, always there, omnipresent in his influence over the Sycamores and reliable as a metronome, one Sycamore stood above all — shortstop Jordan Schaffer.

Apart from his loud two-home run game in the MVC Tournament, Schaffer isn't likely going to blow you away on one single viewing. Not that you can't appreciate the Terre Haute native's skill set in a one-game setting. His glove is slick, his range is impressive, his plate approach is flexible, a word that is apt, but doesn't really seem emphatic enough to describe his excellence. Schaffer will punish mistakes, but he will also take what he's given against a pitcher who's on his game and still makes something of it.

All of those tools are there when you see Schaffer play one game, but to truly appreciate how mammoth his contributions were for the 2021 Sycamores, you have to watch him as I was fortunate enough to do in seven games over a two-week period.

The consistency Schaffer brings to the diamond is simply remarkable. There was not a single game ISU played in Carbondale or Nashville where Schaffer was not a significant threat at the plate or with his glove at shortstop.

Schaffer's numbers over the last two months are phenomenal. Schaffer doubled on Sunday in ISU's season-ending loss to Georgia Tech to extend his season-ending hit streak to 12.

During that hit streak, Schaffer had seven games where he had at least three hits. That helped him hit an amazing .557 over the course of a streak in which he hit four home runs and had 10 RBI.

But Schaffer's excellence doesn't stop there. Schaffer obviously failed to get a base hit in the contest before his 12-game hit streak began, but it was only a one-game drought. Prior to that, Schaffer had a 17-game streak. So Schaffer finished the season by hitting in 29 of his last 30 games. Over the course of that run, which goes back to April 10, Schaffer hit .454.

That brand of consistency taken to an elite level was not lost on ISU coach Mitch Hannahs.

"When you have that steady guy at the top of the order and at shortstop, it impacts everyone. You watched it as well as I did. I can't tell you how many games he started off with a base hit. I'd like to know," Hannahs said.

We're here to answer that one for you, Mitch. Schaffer took over the leadoff role for good from second baseman Josue Urdaneta on April 24. Schaffer led off six games with base hits, including half of the eight games ISU played in Carbondale and Nashville.

"He was our table setter and our energy at the top of the lineup. In my estimation? He played as well as anyone in the country for the last month-and-a-half," Hannahs said.

Schaffer has been remarkable and he's yet another example of the local well of talent ISU has drawn upon for years.

Depending on when you began paying attention to ISU baseball, you can likely reel off one Sycamore standout after another who hailed from Vigo County.

I started in 2005 and all three of the Vigo schools have produced impactful Sycamores. From Terre Haute North's Nick Ciolli and Tony Rosselli to Terre Haute South's Koby Kraemer and Jacob Hayes to the pipeline of standouts from West Vigo — Jeremy Lucas, Jordan Pearson, Tyler Wampler, and now, Schaffer.

Those are just the biggest contributors among many others who suited up for the Sycamores. (And those don't count important contributors from nearby schools like Northview's Brady Shoemaker, Marshall's Kyle Burnam and Robinson's Derek Hannahs.)

Because there's a local connection, Schaffer's contribution is that much more rewarding. ISU can't count completely on local talent to win at a high level — and the non-local players who have stood out in a Sycamore uniform deserve an equal amount of love — but it's nice to know there's always one or two players, like Schaffer, who are going to come into the program and maintain that tradition.

Many of those local players who starred for the Sycamores were drafted and got a chance to pursue their big league dreams. The buzz in the press box at Vanderbilt was that Schaffer opened a lot of eyes with his excellence. Time will tell on that front.

For me, in a season in which ISU was barely seen due to having just eight home games, I'm thankful I got those seven tournament games to see what Schaffer was all about.

In many respects, for me, it was the "Season Of Schaffer." Few players have been so reliable over such a long period of time and on such a quality team.