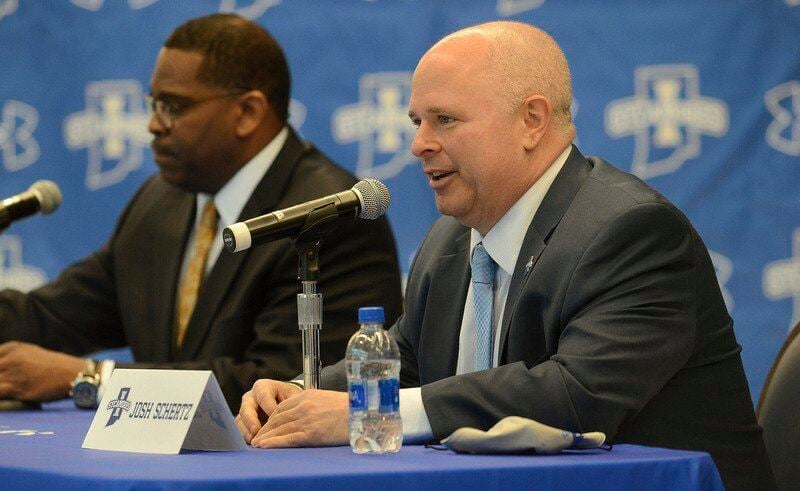 Thanking the ones who mean the most: New Indiana State men’s basketball coach Josh Schertz (right) begins his introduction by thanking his family for all of their support during the press conference to introduce him Thursday in Hulman Center. ISU athletics director Sherard Clinkscales also is present. 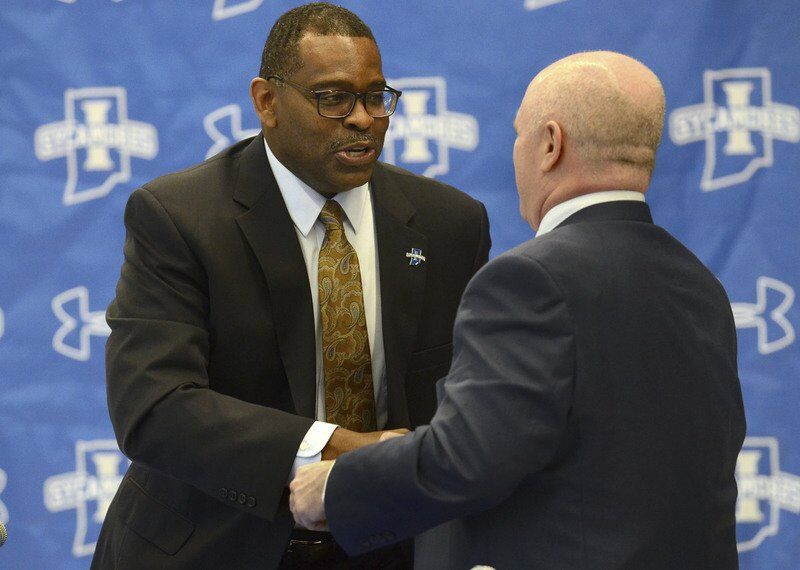 Thanking the ones who mean the most: New Indiana State men’s basketball coach Josh Schertz (right) begins his introduction by thanking his family for all of their support during the press conference to introduce him Thursday in Hulman Center. ISU athletics director Sherard Clinkscales also is present.

I looked out my window on Thursday morning — coincidentally, 10 years to the day that ISU last played in the NCAA Tournament in Cleveland against Syracuse — as I got myself ready to attend Josh Schertz's introductory press conference.

I was kind of bummed out. It was raining pretty hard. I had the vain concern about getting wet walking into Hulman Center before I covered an important event, but from a metaphorical point of view, I was hoping it would be a nice day. For no other reason than to have a sunny start to symbolize the new beginning for Indiana State's men's basketball program.

The storm clouds also took on another kind of symbolism.

Inside this press conference, there would be people who were passionately on both sides of the Should Greg Lansing Stay Or Should He Go Brouhaha — myself included.

I was pretty strident in my view that Lansing deserved the chance to stay. I wrote a few pieces about it, as well as stating my views in the Down In The Valley podcast and blog. I still stand by everything I wrote and said. There were others inside Hulman Center who agreed.

There were others who were passionate about the need to make a change. Some had basketball reasons in mind. Others had personal beefs, just like there were Lansing's supporters who backed him because he was their friend. The nuance and reasons for the whichever camp you happened to be in differed by the person, but the passion generated over the last month was undeniable.

The rancor went up a notch. Feelings were hurt, skin thinned, and there have been accusations and resentments that were fostered in the open and behind the scenes. And many of those people would be sharing the same space inside Hulman Center on Thursday trying to play nice with one another.

I wondered how all of that might shake out as I parked and walked towards the arena. Happily, the rain had stopped, so that was a good omen.

Then, I met Josh Schertz for the first time. And I was hit with the immediate reality that all of the drama generated in the last month (and well beyond) was finally behind us. No matter which "side" you might have been on with regards to Lansing, it was clear that Schertz had an infectious way about him that would go a long ways towards bringing you around to his side.

Schertz has not spent a single minute being a player in the Lansing-related drama. He might have had the only ego that walked inside Hulman Center unbruised. The only baggage he had was sitting in his hotel room. While many of us had the dirt of taking part in a fight for our own views on us, he was clean and free of it all. There were no daggers in his eyes for anyone — only the wide-eyed excitement of a new journey being embarked upon.

His energy was contagious. He spoke to me about his crazy Wednesday where he spoke with his Lincoln Memorial team in the morning, jumped in his car and made the (circuitous) trek from Harrogate, Tenn. to Terre Haute and then talked to ISU's team. That's a long day leading to another whirlwind Thursday, but he was riding high on achieving his Division I dream.

I actually got a taste of Schertz's enthusiasm the night before. When it became official on Wednesday that Schertz was coming aboard, I reached out via email. I offered congratulations and assured him of a professional working relationship. I said he could call if he wanted to say hi. I knew he was swamped, so I also told him it was no big deal if he didn't have time.

I didn't get a response, but didn't think anything of it as I knew he was busy. Then, just before I went to bed, I checked my email one last time and there was an email from Schertz. He apologized for not getting back to me earlier, which was unnecessary, and expressed well-wishes of his own.

Not only was this a nice gesture, but in it's own small way, it also spoke to the idea that Schertz never stops doing what's right for his program. No detail is too small.

Schertz's press conference went well. Everyone I talked to afterwards was impressed. He imparted a clear vision of what he wants to do with the ISU program. He won over many by announcing that ISU associate head coach Kareem Richardson was staying on, an olive branch to both Lansing's supporters, and far important, the players who are on the fence to leave or stay with the Sycamores.

Even though I wrote supportively of Lansing over the last month, I knew once the decision was made that whomever replaced Lansing needed to be given a fair shake. With a 336-68 record, it's clear in Schertz that ISU is placing its chips down on the old stand-by that good is the enemy of great. I wrote in an earlier column that ISU needed to wow everyone with its new hire. Bringing on Schertz isn't a bad stab at that, not bad at all. We'll see if it all pans out the way ISU hopes.

However, whether it does or doesn't, and whether you were pro- or anti-Lansing, it is nice to be freed from the endless temperature-taking that had gone on and on and on for a considerable part of the Lansing era.

Yes, that's just college basketball in the age of the internet, and as Schertz mentioned, honeymoons don't last forever, but Lansing's trial — if you want to call it that — seemed more protracted than most. The assessment of his performance long precedes anyone involved in ISU's current brain trust. Even during the Jake Odum era, there were detractors, sometimes, present company included.

Lansing's former five-year rollover contract and ISU's inability to raise enough money to buy Lansing out once it was canceled, just made the stay or go debate take on a Homeric length.

After a while, it seemed to be all anyone wanted to talk about. It consumed everyone. The fans, ISU's administration, ISU AD Sherard Clinkscales (whose decision I disagreed with, but who also took some unfair jabs from fans going too far), the media, the players, and Lansing himself. I think it's fair to say it wore everyone out.

The sun didn't come out during Schertz's press conference, but in the end? It didn't have to. Schertz's presence and enthusiasm made it clear to those who have had swords drawn for the last month on either side of the drama that it's a new day.

Schertz deserves to start his regime without anyone's hurt feelings getting in his way. We're free from the drama and can go forward. Passionate though I've been about my point of views, I'm pleased to lay my guns to the ground. I don't want to shoot them anymore.

Let the Schertz era begin. And let's give him the fair chance he deserves.