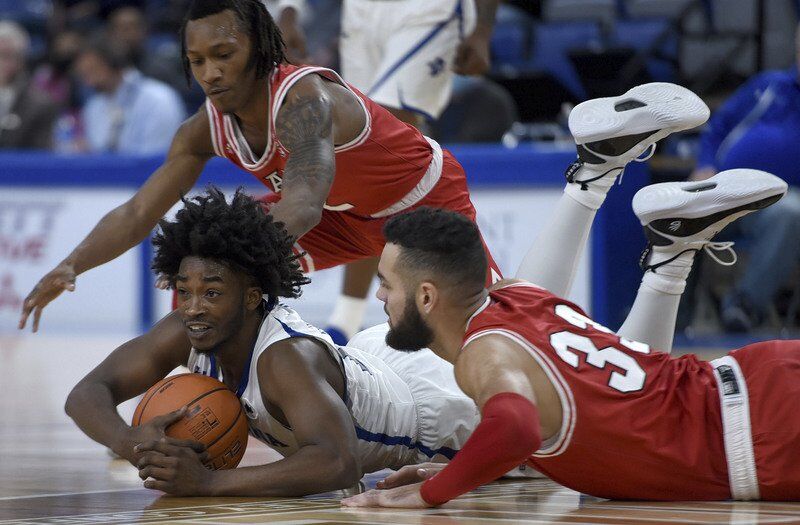 Tribune-Star/Joseph C. Garza Down for it: Indiana State's Micah Thomas dives for a loose ball against Miami of Ohio's Elijah McNamara during the Sycamores' 69-68 win on Saturday at Hulman Center. 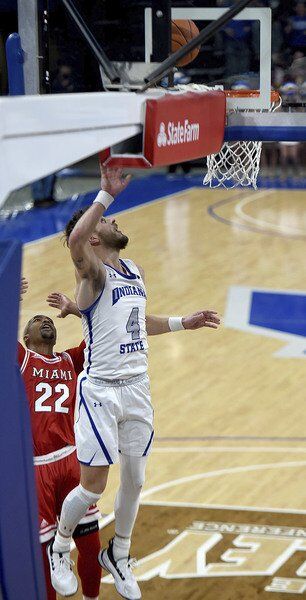 Tribune-Star/Joseph C. Garza The winner: Indiana State's Cooper Neese watches his shot go in with 1.6 seconds left on the clock during the Sycamores' 69-68 win over Miami (Ohio) on Saturday at Hulman Center.

Tribune-Star/Joseph C. Garza Down for it: Indiana State's Micah Thomas dives for a loose ball against Miami of Ohio's Elijah McNamara during the Sycamores' 69-68 win on Saturday at Hulman Center.

Tribune-Star/Joseph C. Garza The winner: Indiana State's Cooper Neese watches his shot go in with 1.6 seconds left on the clock during the Sycamores' 69-68 win over Miami (Ohio) on Saturday at Hulman Center.

The last 12.7 seconds of Indiana State’s men’s basketball game against Miami of Ohio had it all.

On the emotional scale? It went from oh no to oh yes! And then veered to – you’ve got to be kidding me?

Through it all, happiness and sorrow were experienced both ways, and in the case of a couple of Sycamores on the floor and ISU coach Josh Schertz? There was even a bit of post-traumatic stress syndrome.

In the end, it equaled exaltation for the Sycamores. ISU earned a 69-68 victory over the RedHawks at Hulman Center, an outcome decided by a Cooper Neese layup with 1.6 seconds left, and a replay review that ruled out a stunning half-court would-be game-winner by Miami’s Isaiah Coleman-Lands at the buzzer.

ISU (4-5) broke its four-game losing streak and claimed a win over a Miami team that was not too much worse than the teams ISU lost to during its skid.

On the drama scale, it was one of the games Hulman Center has witnessed in quite a while. The Sycamores were obviously pleased to be on the winning end of a contest in which the lead changed hands five times in the final 53 seconds.

“I would have been proud of the guys had the [Miami] shot counted, but they’re a super high-quality team. They’re one of the better mid-majors around. Our guys showed a lot of resilience and toughness,” Schertz said.

In a game that had a lot to unpack, the final two possessions had enough that happened to fill one ordinary game.

Miami’s Mekhi Lairy had made a go-ahead layup with 12.7 seconds left to put the RedHawks up 68-67.

Schertz had a play-call in-mind. It didn’t work out as planned.

“I’d like to credit my coaching [for the Neese shot], but I’d be lying. We drew up a play and they took it away. Coop was going to bring it and we were going to put it in Cam Henry’s hands to make a read,” Schertz explained.

Having to improvise, Henry found Xavier Bledson on the baseline. The savvy ISU point guard bided his time on the baseline, cut off by Miami’s Dae Dae Grant from making a move towards the basket.

It didn’t matter because Neese was already making his.

“There’s a lot of freedom and flow in our offense,” Neese explained. “I understand that if [Neese’s defender] is playing me up? I had to cut. I read what the man in front of me was doing. Jobbo [Bledson] gave up his game-winner. He’s always aware of cutters.”

Bledson saw Neese out of the corner of his eye and knew exactly what to do.

“Our offense is so random. If you cut and move? You might find yourself open. I’m backing down and I saw Coop cutting. We win the game,” Bledson said.

With 1.6 seconds left, ISU seemed destined for the win. Hold the phone.

That would normally signify a dagger, but the ball stayed inbounds and somehow spun back to Coleman-Lands just inside the half-court line.

As a few ISU players were already getting ready to celebrate an assumed win, Coleman-Lands heaved it … and it found nothing but net.

Panic. Especially for Bledson, Henry and Schertz, who had seen their Division II championship dream end on a similar heave last April in Evansville when they were at Lincoln Memorial and the Railsplitters were eliminated by West Texas A&M.

“All I could honestly think of when the ball was in the air was that Final Four game last year,” Henry said. “A part of me knew he didn’t make it in-time. It would have killed us if we lost on a buzzer-beater.”

The officials had waved the shot off on the floor, but the replay review was close. In the end, Coleman-Lands’ stab at miracle glory didn’t count.

“Luckily, he didn’t grab the ball point-two seconds earlier. Watching the ball go in the air reminded me of the Final Four last year. Knowing how that felt. He didn’t beat the clock this time,” Henry said.

ISU might have had some good fortune in that. Miami never asked for a clock review after Neese’s shot. If they had? They might have had a bit more time added on.

The kernel of the late-game dramatics was planted when Schertz was able to identify a five on the floor that could get stops. After Miami’s shooting percentage for the game was creeping up into the high 50s through the first 28 minutes of the game, the quintet that ended up providing ISU with stops was an unlikely combination. Bledson, Crawford, Neese, Micah Thomas and Zach Hobbs.

“The game turned there,” Schertz said. “I took out Cam Henry and I was worried about Hobbs’ ability to guard. We put him on their five, which he’s never done, not even in practice. Hobbs is a pretty cerebral kid. He was able to do it. He fought like crazy. They all did. Cam Crawford’s defense was as good as it’s ever been.”

ISU was down 58-50 when it kept Miami from scoring on 10 straight possessions. While ISU didn’t take immediate advantage, a Bledson layup at the eight-minute mark broke the ice. A Thomas 3-pointer at 6:04 tied the game and Thomas put ISU in front for the first time since the first half at the 4:32 mark.

“Coach preaches defense. And we couldn’t score, so we had to get stops,” Bledson said.

The final 4:32 featured eight lead changes and one tie before the dramatic conclusion.

The first half was dead-even for most of its 20 minutes. At the final media timeout, the teams were two percentage points apart in shooting percentage and even in both rebounds and assists. Miami led 39-37 at the break.

ISU has nine days off until it hits the road again, this time for a challenging trip to play another good program – North Dakota State. Having a win, especially a dramatic one, is always a welcome development for exam week.

“We’ve got to be locked in this week. This can’t be a gimmie week where we don’t go as hard as we possibly can. We have to build off of this and make each other better [in practice],” Neese said.