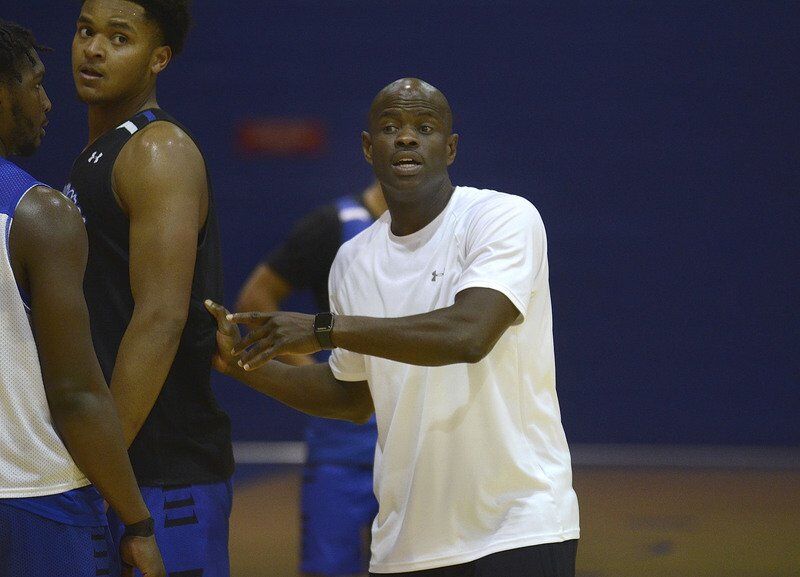 Staying on the staff: Indiana State assistant coach Kareem Richardson (right) talks about a specific play during the Sycamores' team practice Oct. 29, 2019, in the ISU Arena. 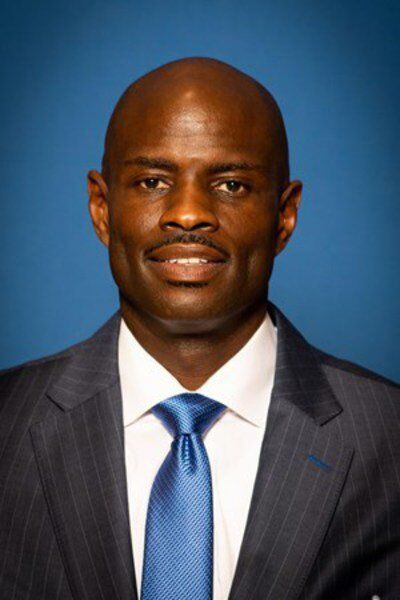 Staying on the staff: Indiana State assistant coach Kareem Richardson (right) talks about a specific play during the Sycamores' team practice Oct. 29, 2019, in the ISU Arena.

New Indiana State men's basketball coach Josh Schertz, like any other new coach, is certainly owed the right to run his program as he sees fit.

However, what Schertz has seen fit to do is to maintain a bridge of continuity to the previous Greg Lansing regime.

Schertz announced during Thursday's introductory press conference that associate head coach Kareem Richardson would be staying with the ISU program.

"Kareem has agreed to stay on and we're excited about that," said Schertz, whose confirmation of the Richardson news drew a round of applause from the assembled supporters at Hulman Center.

"I had told Sherard [Clinkscales, ISU Director of Athletics] that if you had somebody on staff that you could keep to help with the transition, he was high on Kareem. So I spent some time talking to him. It's a delicate situation when you're transitioning and he was working with Greg. There was a tremendous relationship there. It's not binary for me. He loves Indiana State and he loves these guys. There's an alignment in how we can operate. He's been a great resource for me so far."

For Richardson, who returned to ISU as an assistant in 2019 after his head coaching stint at Missouri-Kansas City ended, it was a tough choice. Richardson and Lansing were close, but Richardson was also impressed with Schertz.

"It was a tough decision. There's certainly a lot of loyalty to Greg and what he's meant to me. Ultimately, a couple of things played in my decision. First and foremost, are my kids. My oldest son [Amari] is with me here and going to Terre Haute South, that was big in the decision. And finally, speaking with Coach Schertz, I liked his vision. I liked his style of play and I thought it could be a good fit for me as well," Richardson said.

In addition to Richardson, Switz City native Matthew Graves is expected to join the ISU staff. Schertz would not confirm it during his Thursday media availability, but several sources told the Tribune-Star that Graves, currently an assistant at Xavier who was head coach at South Alabama from 2013-18, was coming aboard.

Schertz was expected to meet with assistant coach Jake Odum and director of basketball operations James Schmeits on Thursday to speak with them about their plans.

"We want to put together a great staff. I know that there's going to be a steep learning curve for me coming up to the Missouri Valley. I want people around me who expedite that learning curve," Schertz said.

Richardson, who was also at ISU from 1999-2000 on Royce Waltman's staff, said it was a two-way street in establishing a relationship with Schertz once it became apparent he might get the job.

"There was dialogue. We had a conversation before anything was officially asked. We didn't know each other. So it was about getting a feel and understanding. The initial conversation went really well and I think that was a springboard for him, with me being on the previous staff to make sure I was in line with the things that are important with his program," Richardson said.

With the coaching staff situation moving along, Schertz's most visible duty is to try to convince players from ISU's current roster who fit his plans to stick around.

The door is still open for Tyreke Key, Randy Miller Jr. and Tobias Howard Jr. to returns too as seniors can return in 2021-22 given the COVID-19-related amnesty the NCAA has given athletes this season due to the pandemic.

Schertz is hoping that Richardson's presence will help convince some players to stay.

"With Kareem here, it gives the players a sense of comfort to know that Kareem believes enough in what we're doing to stay on-board and believes in our vision to stay here. Hopefully, that will give them some comfort," Schertz said.

Schertz has had previous dealings with both Williams and Stephens. He recruited both to Lincoln Memorial and thought he had Williams until the center elected to attend Woodstock Academy, a prep school. ISU recruited Williams from Woodstock.

"We thought Tre Williams was coming [to Lincoln Memorial]. He told me was 99% in at LMU. His best friend is our point guard [at LMU], Julius Brown. They made their official visits together. Kailex took an official visit with us," said Schertz, who also recruited LaRavia in the early days of his recruitment.

As of Thursday, over 630 players were in the NCAA transfer portal, with that number expected to swell much higher after teams are eliminated from the postseason and once coaching changes are made across Division I.

With relaxed eligibility rules and transfer guidelines due to COVID-19 — no one will have to sit out a year if they transfer — keeping who  you have is good, but if you don't? There's going to be a lot of players available to shop for.

"It will be different [in Division I]. The deal with re-recruiting is you have to have guys that are completely bought in to what you're doing and they have to fit your style of play, they have to fit Indiana State and fit what you want your program to represent," Schertz continued. "If that means re-recruiting somebody or bringing someone new into the fold? If you have proven Valley players that fit your scenario? That's the ideal."

"But the worst thing you can do is guys who are lukewarm or not bought in. It's hard to win. It's impossible to win," Schertz concluded.