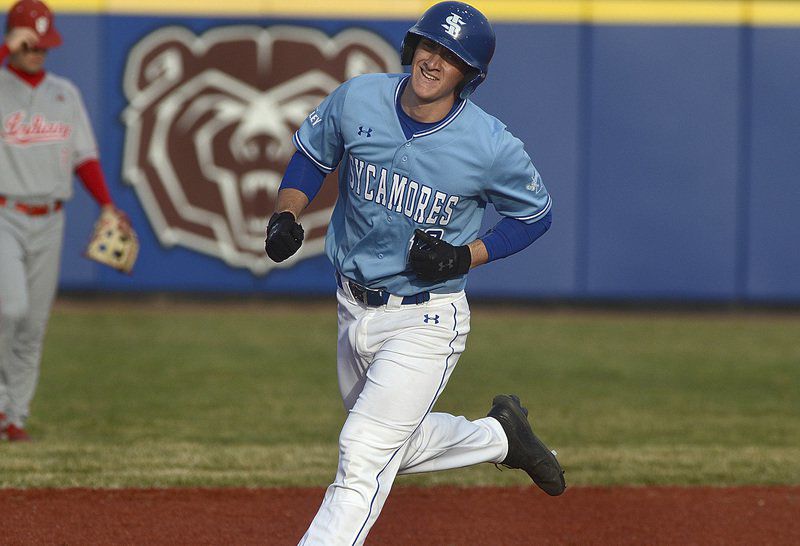 Tribune-Star/Joseph C. Garza Home run happiness: Indiana State's Max Wright smiles as he rounds the bases after he hit a home run during the Sycamores' game against Indiana on March 19, 2019 at Sycamore Stadium. 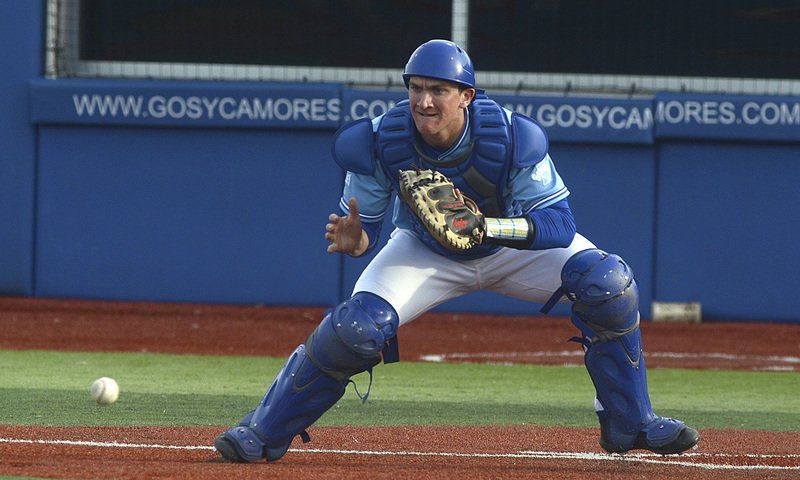 Tribune-Star/Joseph C. Garza Ready for it: Indiana State catcher Max Wright prepares for the throw to home plate during the Sycamores' game against Indiana on March 19, 2019 at Sycamore Stadium. 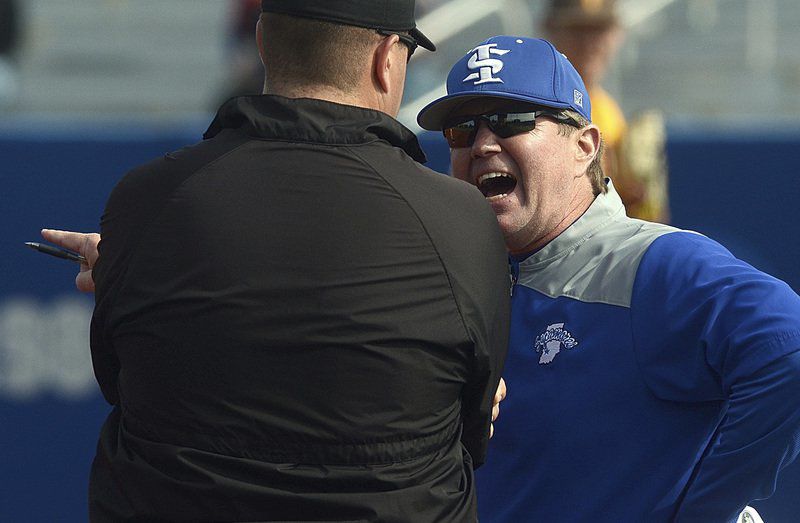 Tribune-Star/Joseph C. Garza I disagree: Indiana State head coach Mitch Hannahs disagrees with a call during the Sycamores' game against Valparaiso on April 13, 2019 at Sycamore Stadium.

Tribune-Star/Joseph C. Garza Home run happiness: Indiana State's Max Wright smiles as he rounds the bases after he hit a home run during the Sycamores' game against Indiana on March 19, 2019 at Sycamore Stadium.

Tribune-Star/Joseph C. Garza Ready for it: Indiana State catcher Max Wright prepares for the throw to home plate during the Sycamores' game against Indiana on March 19, 2019 at Sycamore Stadium.

Tribune-Star/Joseph C. Garza I disagree: Indiana State head coach Mitch Hannahs disagrees with a call during the Sycamores' game against Valparaiso on April 13, 2019 at Sycamore Stadium.

When college baseball stopped just before Indiana State's baseball team was to begin a home series with Michigan State on March 13, it was obviously a devastating blow for all Sycamores, but especially, for seniors who had their last go-around cut short.

The NCAA recognized this was an unfair situation for senior athletes in all spring sports, but it has allowed athletes who would have been seniors in 2020 in spring sports to return for another year.

For ISU's baseball players? It was a relatively easy decision. Six of ISU's nine seniors have signaled their intent to come back in 2021. The three seniors — Collin Liberatore, Brandt Nowaskie and Austin Moralis — are not anticipated to return.

For everyone else? Once they knew they could come back, many elected to.

"As of right now, I plan on coming back and starting grad school and play for a fifth year," ISU relief pitcher Tyler Grauer said. "I made my decision to come back before all this draft stuff came down. My decision was pretty easy. I have something to fall back on if I don't get picked up."

ISU catcher Max Wright, the Sycamores' only experienced starter, gets to have another shot at his senior year after his intended one was stunted by a broken wrist.

"I love ISU. They gave me an opportunity out of high school," said Wright, who will attend graduate school next year. "I hope I can play a full senior year. It was frustrating going down 10 days before the season started. The situation everyone is in sucks, but you have to look at the silver lining of things. It's the only way you can stay sane."

The NCAA left it up to its schools on how they wanted to handle the return of the "extra" seniors. It's more of a complicated issue than the altruistic way it might seem on the surface.

Though some schools have lobbied for it, there has been no temporary increase in scholarship numbers, so the "extra" seniors must fit within the scope of normal roster restrictions.

Moreover, schools had the decision-making ability to decide how they wanted to dole out scholarship money. In ISU's case? No extra money was provided for the "extra" seniors. The baseball program had to fund-raise to account for the surplus in players or count them in their existing allocation.

"As soon as it hit us, we felt like of the six guys? We could keep two on the money they were on, we could fund-raise for two, and we probably wouldn't be able to pay for two," ISU coach Mitch Hannahs said. "That's how we broke it down. If someone like a Tristan Weaver is drafted and signs, his money could be used to help someone else. That's how we got our seniors through."

On the surface? ISU was fortunate. It didn't have many seniors, certainly not like the Sycamores did in 2019, when its had 14 seniors and seven everyday senior starters that fueled ISU to a NCAA regional appearance. Wright was the only returning senior was played regularly prior to 2020.

However, the comparative lack of seniors doesn't mean there isn't a roster problem. It simply moves the roster number problem down the line. To fit seniors who would have graduated means underclassmen who hadn't yet established themselves had to be moved on.

The return of the seniors could also see continued roster flux down the line as underclassmen who were waiting their turn might have to wait longer or not get their turn at all.

"It hurt our younger players that were a year-and-a-half away. The guys that were in front of them didn't go anywhere, so they're two-and-a-half years away. Those guys, for the most part, left the program," said Hannahs, who noted that some of those players — most of whom hadn't played yet — could return after a JUCO stint.

Another factor that has played a role in the decisions of all seniors at all schools was Major League Baseball's decision to reduce the draft to just five rounds from 40. Not only does that eliminate over 1,000 jobs that would have gone to drafted players, but MLB has also limited how much can be spent on undrafted free agents. MLB has cited cost containment in the wake of lost revenue from the COVID-19 crisis, but long before the crisis, MLB was working to eliminate 40 of its affiliated minor league clubs.

"With the draft being cut to five rounds, that took a lot of opportunity away from a lot of people," Wright said. "It's disappointing. I understand it to a degree. I understand there might not be professional baseball. It's not going to be like we thought it would play out. Thirty-five rounds worth of guys were expecting to get their name called and won't get that opportunity.

Wright never considered signing as a free agent, but he feels for those players who would have been drafted from the 6th to 12th round, usually players who have a fair shot at making the big leagues and who sign for bigger money than what's being offered.

"Those guys are going to be out a significant amount. You can sign as a free agent, but it's capped at $20,000. It's unfortunate for a lot of guys. I'm far from the only guy in that boat," Wright said.

The upshot for ISU is that it will have a more experienced team in 2021 with six players back the Sycamores wouldn't have had otherwise. Though ISU only played 14 games, the inexperienced Sycamores won six of their last seven and felt as if they were starting to get the hang of things.

"We were starting to make strides. I think we gained the camraderie. It was a new team from last year. We're getting to know each other and our playing styles. We gained chemistry," Grauer said.

Hannahs cautions against reading too much into the small amount of games ISU had this season.

"I've asked myself the question — what does 14 games do for experience? And not going through a Valley schedule? I've got to think it's something. I don't think 14 means nothing, but I still don't think it's going through the grind of a season. That's something we needed for those guys. They're still young, but they're still draft eligible at the same time, so that doesn't change a lot. I'm just hopeful it helps more than I think it might," Hannahs said.