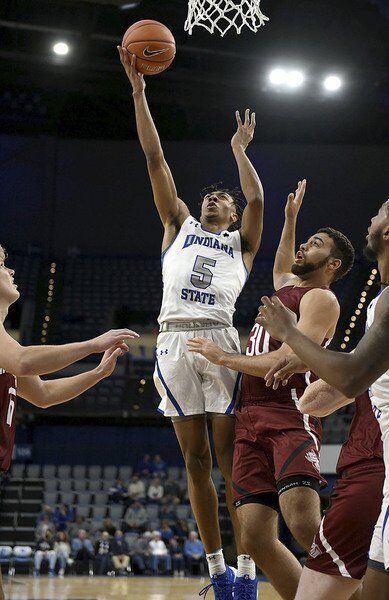 Tribune-Star/Joseph C. Garza Just the right touch: Indiana State's Cameron Crawford drives through the Rose-Hulman defense and scores during the Sycamores' home exhibition game against the Engineers on Thursday in Hulman Center. 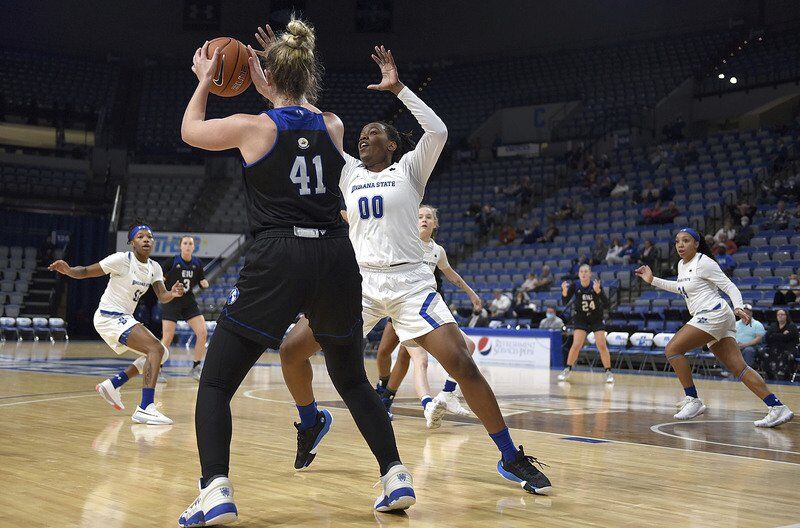 Tribune-Star/Joseph C. Garza Just the right touch: Indiana State's Cameron Crawford drives through the Rose-Hulman defense and scores during the Sycamores' home exhibition game against the Engineers on Thursday in Hulman Center.

When Indiana State's men's basketball team went to Loyola on Wednesday? They were the enemy that everyone in the Missouri Valley Conference knows.

With Miami of Ohio visiting Hulman Center at 1 p.m. Saturday — ISU's first home game against a Division I opponent — they may not be as known a foe as the Ramblers are, but the RedHawks might be just as deadly.

Later, at 6 p.m. on Saturday, another Mid-American Conference school — Western Michigan — takes on the ISU women.

ISU will have its hands full with the RedHawks — a talented team coached by former Purdue assistant Jack Owens. Miami is very athletic, plays smart, can shoot the 3-pointer very well, and is one of the best defensive teams in the nation, especially inside the 3-point arc, where Miami has only allowed an average of 12.6 two-point baskets per game.

"They're an excellent team. I didn't realize until I started looking at them that they returned 99.9% of their scoring. They beat Georgia Tech and they lost to Cincinnati by one," ISU coach Josh Schertz said. "They're so dynamic offensively. They stretch you and they can drive it. Grant, Lairy and [Dalonte] Brown, they can make threes and go to the rim."

There are familiar faces on the RedHawks (5-2) too. One is Terre Haute native Myja White. The 6-foot-1 junior guard did not play high school basketball in Terre Haute, he played all four of his years at Brebeuf in Indianapolis, but White attended Meadows Elementary in his early years in Terre Haute. White is averaging seven points for the RedHawks.

Another familiar face is former Evansville Bosse standout Mekhi Lairy. The speedy Lairy has serious jumping ability, playing above the rim at times despite his 5-foot-8 frame. Lairy is a big catalyst for the RedHawks, averaging 14.6 points. Fellow guard Dae Dae Grant (17 ppg) is the only Miami player who averages more.

"Their steal rate is high and they block shots like no one else. They really defend the rim. They're so athletic and quick," Schertz said. "Unlike Loyola, where they're system oriented? This is more kind of free-flowing. They still run stuff, but it's about those guys being able to create and improvise."

ISU (3-5) has lost four in a row, albeit to three teams that harbor NCAA Tournament aspirations. The Sycamores won't find life easier on Saturday. Schertz confirmed that point guard Julian Larry will be out, leaving ISU thin at the point guard spot.

"It's going to be really challenging for us. We've played four NCAA Tournament teams to this point. Miami of Ohio is right there with them. Hopefully, we'll be a little better. Our ability to get back in transition, our ability to contain the basketball and to finish with rebounds, they're going to test us in those areas and we need to be better," Schertz said.

Schertz said that freshman guard Quimari Peterson, who was in uniform during Wednesday's 88-76 loss at Loyola, could play in an emergency situation on Saturday. Peterson, who had a longer COVID-19 protocol than some of the other Sycamores, only returned to full practice this week. Peterson missed most of September and November and all of October with an ankle injury, plus, COVID-19.

Schertz said he hopes that with no games next week? Peterson will get practice time enough to try to insert him into the rotation by the time ISU plays at North Dakota State on Dec. 13.

Right now? ISU (3-4) is riding the hot hand of Del'Janae Williams, who has scored 20 or more in two straight contests. ISU is averaging 12.3 steals per game.

Western Michigan (4-2) will be a tougher challenge for the Sycamores. It's a game that will likely be one for those who enjoy basketball-style thieving — the Broncos are also adept at taking the ball away.

The Broncos, winners of three in a row, have already beaten one Missouri Valley Conference foe — Valparaiso — by 15 and only lost at Purdue by eight. Guard Lauren Ross averages 19.7 points and 4.3 rebounds per game. Forward Reilly Jacobson (13.3) and forward Taylor Williams (12.7) are also threats.

Next – ISU plays at Nebraska on Dec. 11. WMU plays at Detroit on Wednesday.

FARMERSBURG - Genevieve Elizabeth Krackenberger, 87, passed away Tuesday, January 25, 2022. She was born to the late William Thomas and Ester (Sparks) Johnson on October 22, 1934 in Patricksburg. Genevieve loved to paint and read. She enjoyed spending time outdoors, living in the country and…