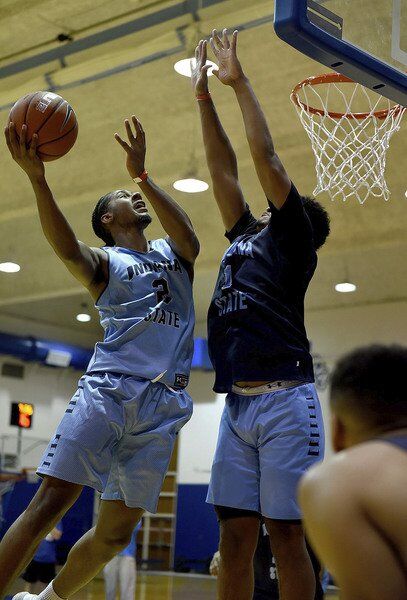 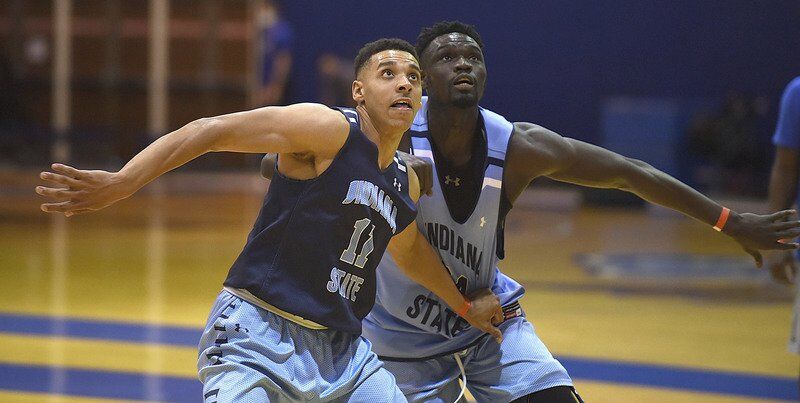 Tribune-Star/Joseph C. Garza Muscle required: Indiana State's Tyreke Key and Ndongo Ndaw collide as they prepare to snatch a rebound during the Sycamores' practice on Friday in the ISU Arena. 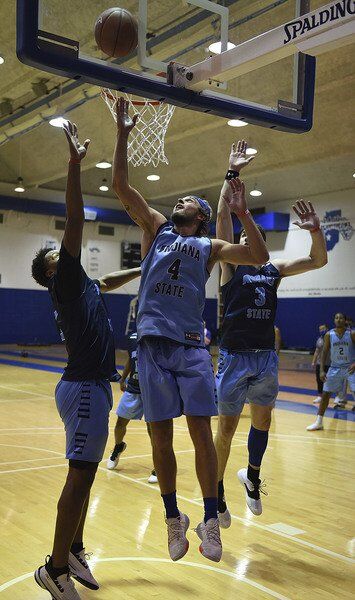 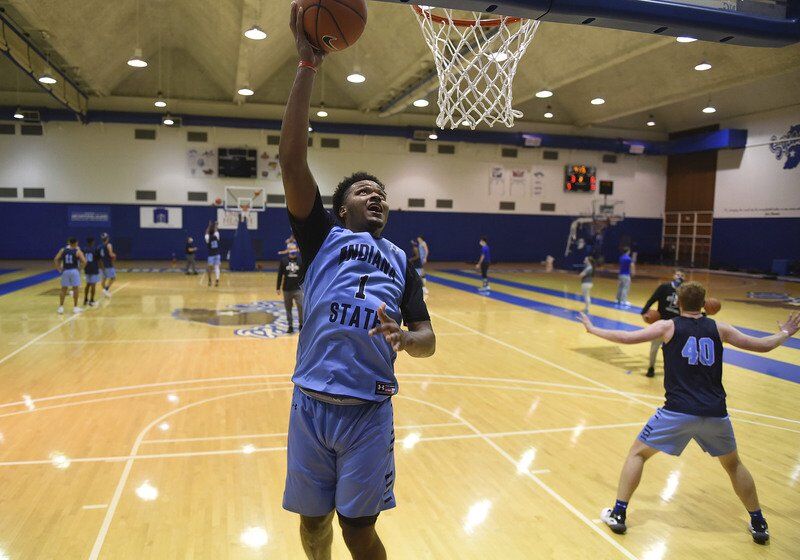 Tribune-Star/Joseph C. Garza Driving strong: Indiana State's Tre Williams spins to the basket and scores during the Sycamores' team practice on Friday in the ISU Arena.

Tribune-Star/Joseph C. Garza Muscle required: Indiana State's Tyreke Key and Ndongo Ndaw collide as they prepare to snatch a rebound during the Sycamores' practice on Friday in the ISU Arena.

Tribune-Star/Joseph C. Garza Driving strong: Indiana State's Tre Williams spins to the basket and scores during the Sycamores' team practice on Friday in the ISU Arena.

In the times of COVID-19, you bless every day that takes on some semblance of normal.

So it was Friday when Indiana State's men's basketball team had its first official practice at ISU Arena. Seeing players on the floor six weeks before the season is scheduled to begin felt ... like it ought to.

"I commend these guys on dealing with a tough hand. You have no social life. You have to follow the protocols. These guys have handled it in a mature way. Today did seem normal for them. They had great energy and we got a lot accomplished," ISU coach Greg Lansing said.

Of course, there were plenty of reminders that things aren't normal. When players weren't practicing, masks were worn diligently. All coaches had masks on throughout the practice. There also wasn't the usual group of fans watching.

And attendance wasn't 100% either. Guard Jared Hankins was held out as a precaution, though he has tested negative for COVID-19 when he developed a symptom that falls within ISU's protocol. Ndongo Ndaw and Cobie Barnes were at practice, but both nursed injuries as Ndaw is still working his way back from summer knee surgery and Barnes has an ankle injury that has him in a boot. Walk-on freshman Sam Mervis also recently had a procedure done on his foot.

Still, it was a time for basketball, not COVID-19, and ISU's players relished that.

"Today was a great day. We had a lot of energy and we got a lot of work done," ISU guard Tyreke Key said. "Everybody does their check-in and we do our survey, we're used to all of that by now — the new normal. We're committed to doing the right things."

Some of the new players have different expectations than others. Miller and Howard will be expected to contribute immediately. As will Stephens, who cuts an imposing figure when he steps out on the wing. What all of the new players have in common is that they haven't had the usual access and social time to bond with their teammates. They're doing the best they can given the circumstances.

"This is what we've been waiting for. Coach has been talking to us about how we want our identity to be. We want to play hard, talk on defense and play together. We had a great first practice," Miller said.

Miller was asked where he feels he fits within the identity ISU is trying to carve out.

The veteran players also have something new to contend with — expectations. ISU was picked fourth in the Missouri Valley Conference after finishing 18-12 and in a third-place tie last season. Key is the only senior in a core group of proven contributors that includes Jake LaRavia, Tre Williams and Cooper Neese.

Miller was asked what his first impression was of his new ISU teammates.

"They're all great guys and they love to be in the gym. That's what you love about these guys. Every chance they have to get in the gym to be better, they're here. And they're always trying to bring someone with them to be better. That's how you create a championship team," Miller said.

Chemistry between the new players and the proven veterans will go a long way towards determining the Sycamores' fate in 2020-21. Camaraderie is difficult to achieve when social distancing and keeping players apart to squelch any threat of a COVID-19 outbreak is possible. However, Lansing is enthused with what he's seen away from an official team activity.

"They've been feeling their way, but the biggest thing is this group has worked on their own outside of our allotted time. They've lived in the gym. They've worked more individually and with each other outside of when we can do it. They've gotten to know each other that way," Lansing said.

Lansing said that process has created a work ethic he likes too.

"It carries over to our practices. This isn't a group where you have to ask them to play hard. As a coach? It's easy. When you practice, you just practice," Lansing said.

This means, in theory, no one on ISU's roster will lose a year of eligibility and all could return next year. It also gives athletes the opportunity to opt out and not be penalized for it when it comes to their NCAA "clock" of eligibility.

"My thought on it is just like anything else when it involves a student-athlete. The more we can do for them? Let's do it. I'm all about them making money off their likeness. They can't have a social life if they want to play a sport. None of us had to go through that. We need to do something for these players," Lansing said.

While the focus was on how this ruling might effect the status of seniors — Key, Howard and Miller are the Sycamores' seniors — it affects the entire roster. If a plurality of the roster wants to exercise their right to take another year, it could create a logjam on the young side of the roster. It could affect the status of high school seniors and junior college transfers trying to find their way to a Division I roster.

Lansing said he hasn't gone through the specifics of the ruling as it pertains to the Sycamores.

"I'm all for it, though I don't know how we'll handle it specifically, but if they want to spend another year playing for the Sycamores? We'd love it," Lansing said.