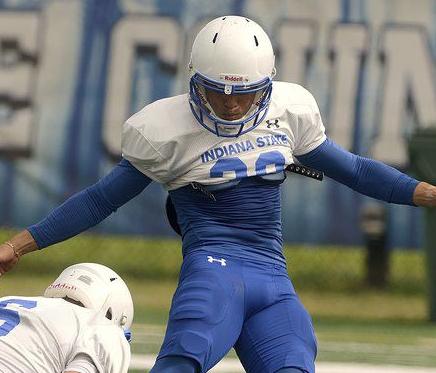 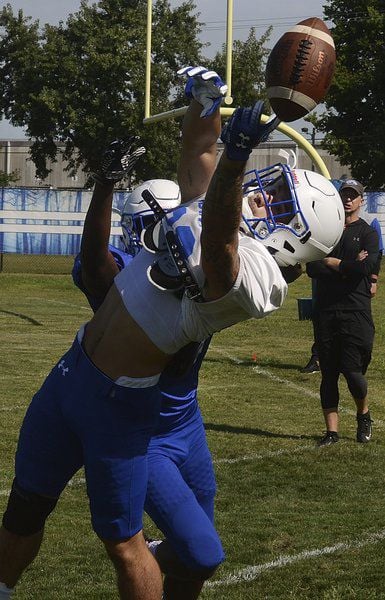 Tribune-Star/Joseph C. Garza Refine it in practice: Indiana State wide receiver Dakota Caton reaches for a pass in the endzone as he is covered by teammate Isaiah Bryant during team practice on Aug. 10 at the Rentschler Practice Field next to Memorial Stadium. 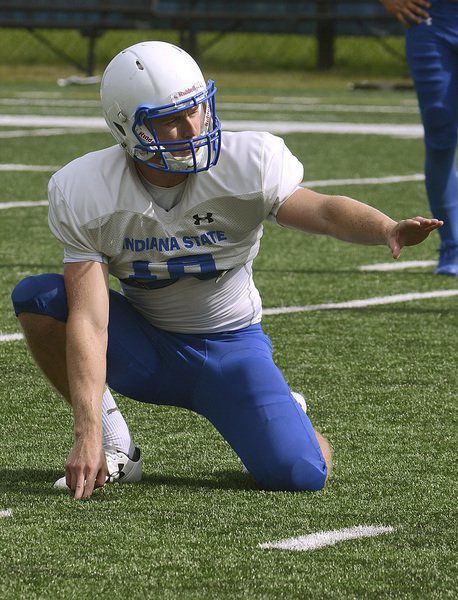 Tribune-Star/Joseph C. Garza Refine it in practice: Indiana State wide receiver Dakota Caton reaches for a pass in the endzone as he is covered by teammate Isaiah Bryant during team practice on Aug. 10 at the Rentschler Practice Field next to Memorial Stadium.

The evolution in kicking and punting — kickers with bigger legs reaching the end zone and punters who are masters at targeting a portion of the field or get hang time to force a fair catch — has been going on for most of the 2000s.

Add to that the concerns about the health of both returners and "gunners" — both are susceptible to big hits and potential concussions — and the return game is more risk-averse than ever.

You see it in the numbers if you go back far enough. Take punt returns. In the Gateway Conference in 1999, teams averaged 29.1 punt returns per season. Five of the seven Gateway members at the time had more than 25 punt returns.

Contrast that to the 2018 Missouri Valley Football Conference season. League schools averaged 19.5 punt returns per team. Five of the 10 MVFC schools had fewer than 20 returns in the season. Two — South Dakota and Southern Illinois — had only nine punt returns.

The change in special teams philosophy provides a challenge for Indiana State special teams coach Kevin Abrams. How do you get ISU's many potential return weapons — Dakota Caton, Rontrez Morgan and Dante Hendrix — the chance to show their stuff and flip field position or score a touchdown?

Abrams noted the changes in how teams approach punts, kickoffs and returns. Few teams will bring a ball out of the end zone on a kickoff, or field the ball at all if it's headed out of the end zone, because you have to take it out to the 25-yard line to gain an advantage from taking the risk.

Punters have become adept at the rugby-style punt, which is much more likely to spin downfield at a trajectory that's hard for a return man to zero in on. Part of rugby-style punting is directional punting. It all adds up to fewer return opportunities.

Abrams said there are counter-measures coming into play to deal with the prevalence of kicking and punting strategies designed to eliminate returns.

"Based on the way punt schemes have transformed, it's become a game of speed. Years ago, you saw far bigger personnel on the field. It's becoming more of an open field space. You want guys out there who can run and stay in the hip of those coverage players and allow your returner to get vertical or outside to get some yards," Abrams said.

If ISU can find the alchemy to make its return game a weapon? It can only help the Sycamores.

Caton averaged 21.6 yards per kick return in 2018 and returned his only punt for a 71-yard touchdown against Eastern Illinois. Morgan averaged 5.4 yards per punt return with Hendrix at five yards per return. Chris Childers and Morgan also handled kick return duties.

As far as the kicking and punting ISU will be doing? It's also in the hands of wily veterans.

Kicker Jerry Nunez returns for his fourth season. A preseason All-MVFC member who has also received some FCS All-American notice, Nunez made 15 of 19 field goal attempts and 40 of 41 extra-points.

"He's really been putting a lot into his body and making sure he's in great shape from a physical standpoint, but also allowing it to transition to improved kickoffs, long field goals and trajectory," Abrams said. "You see it in his kickoffs so far. It's improved dramatically."

Also returning is punter Travis Reiner. In 2018, Reiner was solid in his maiden ISU voyage. Reiner averaged 39 yards per punt, but also had 30 punts that were either fair catches or that landed inside the 20.

"Travis really has done a phenomenal job of training himself in the offseason to take what he does in practice to game day. It's something we've worked since last season. His performance in games didn't match practice, but I think Travis has an incredibly high ceiling," Abrams said.

Long-snapper Wyatt Harwood is also back for his third season of action. He's backed up by Terre Haute's Ben Dillion.