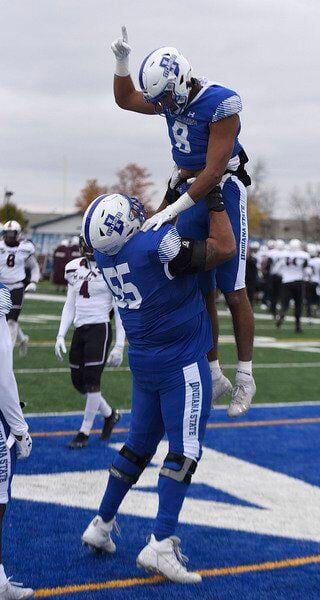 Tribune-Star/Joseph C. Garza Still a close game: Indiana State's Isaiah Edwards lifts up wide receiver Dante Hendrix after Hendrix scored in the first half of the Sycamores' game against Southern Illinois on Saturday at Memorial Stadium. 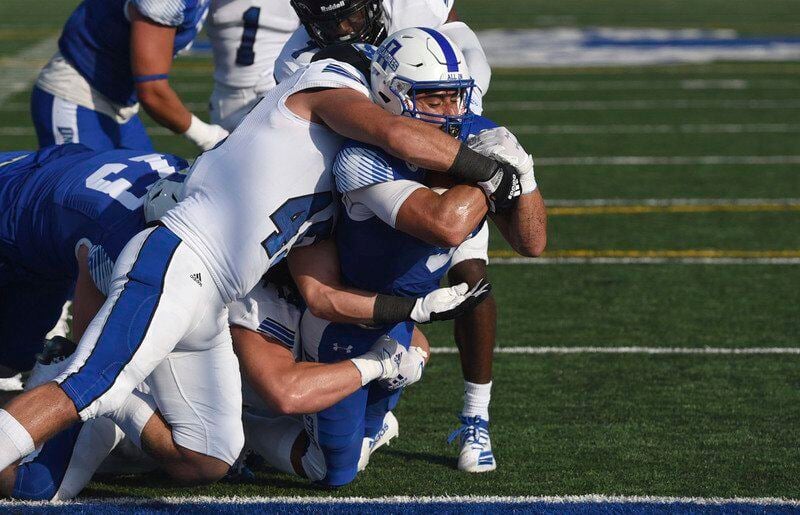 Tribune-Star/Joseph C. Garza One vs. three: Indiana State running back Peterson Kerlegrand fights his way into the end zone to score with three Eastern Illinois defenders trying to hold him back during the Sycamores' win on Saturday at Memorial Stadium. 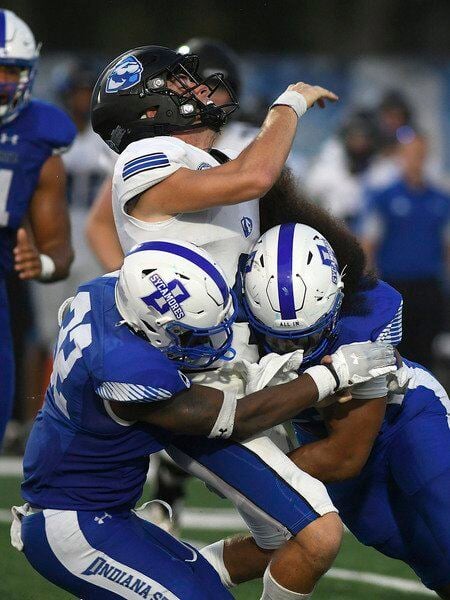 Tribune-Star/Joseph C. Garza Between a rock and a hard place: Eastern Illinois quarterback Otto Kuhns is crunched by Indiana State's Ty Hambright and Inoke Moala during the Sycamores' win on Saturday at Memorial Stadium. 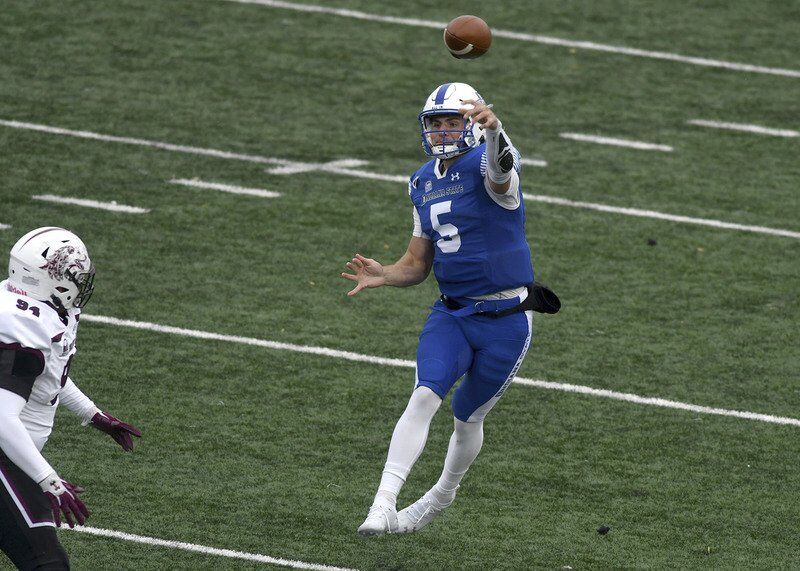 Tribune-Star/Joseph C. Garza Still a close game: Indiana State's Isaiah Edwards lifts up wide receiver Dante Hendrix after Hendrix scored in the first half of the Sycamores' game against Southern Illinois on Saturday at Memorial Stadium.

Tribune-Star/Joseph C. Garza One vs. three: Indiana State running back Peterson Kerlegrand fights his way into the end zone to score with three Eastern Illinois defenders trying to hold him back during the Sycamores' win on Saturday at Memorial Stadium.

Tribune-Star/Joseph C. Garza Between a rock and a hard place: Eastern Illinois quarterback Otto Kuhns is crunched by Indiana State's Ty Hambright and Inoke Moala during the Sycamores' win on Saturday at Memorial Stadium.

One of the strange traits of Indiana State's football season was that, in the grand scheme of things? The Sycamores' 5-6 overall record and 3-5 finish in conference play were both mild surprises.

Many had the Sycamores pegged for three or four wins overall. Preseason prognosticators pegged the Sycamores to be 10th-best in the Missouri Valley Football Conference. In fact, ISU finished tied for seventh place.

So the overall body of work was a mild improvement over expectation, but if the final results were a mild surprise, the way ISU got there wasn't.

ISU lost its buy game at Northwestern and won its two nonconference games against opponents in lesser FCS conferences — albeit barely over Eastern Kentucky — just as you'd expect.

If nothing else, the Sycamores were predictable, but even though ISU exceeded the very modest expectations in front of them? The predictable nature of the team equaled mediocrity in the final balance.

ISU coach Curt Mallory didn't necessarily see it that way. He extolled the positives when asked to sum up the season that was.

"The positive is that we've had three straight season of five or more wins. That hasn't been done very often here. When you're building a championship program, that's what you have to do, you have to continue to build, but we have to take that next step," Mallory said.

Mallory also noted that ISU's conference wins over Youngstown State, Western Illinois and Illinois State are nothing new. All three of those programs have been consistently bettered by the Sycamores during Mallory's time as coach.

"We beat our rival [Illinois State] for the first time at their place since 1997. These guys that built the foundation have a winning record against Youngstown, Western Illinois, Eastern Illinois and Eastern Kentucky, and for the sixth-year guys, Illinois State," Mallory said.

Statistically, it wasn't a good year. ISU ranked 10th in total offense and ninth in total defense in the MVFC. Not good, though ISU's seventh-place finish would suggest they overcame their statistical station in life.

The quarterback position had early turmoil, including a quarterback rotation against South Dakota State, but Anthony Thompson eventually settled into the starting job. He was steady and unspectacular, but cut down on his mistakes as the season progressed. Not coincidentally, he also got better when wide receiver Dante Hendrix — who was second in the MVFC at 7 receptions per game — returned from turf toe mid-season. ISU also perked up when Jeff Kastl began calling plays. He was later elevated to offensive coordinator.

However, ISU has holes to fill. With the nature of the transfer portal being what it is, nearly every position is in constant flux. ISU will have to replace several veteran wide receivers and running back Peterson Kerlegrand (830 yards), who got better as the season progressed, will have to decide if he wants to come back. Normally, his eligibility would be exhausted, but he has a year to use if he chooses. At least two starting spots on the offensive line have to be filled too.

"Offensively, we have to get more production and we have to score more points. Having coach Kastl coming in midway through the season and having spring ball? It will continue to get better," Mallory said.

Mallory also said that any additions out of the portal have to fit ISU's team culture, but the Sycamores will use the portal to target any position if they can find a good fit.

Defensively, ISU was inconsistent. Sometimes, the defense locked down under difficult circumstances. At other times, the Sycamores were prone to big plays. ISU did rush the quarterback well, finishing second in the league in sacks, thanks mainly to eight sacks by veteran defensive end Inoke Moala.

Moala won't be back in 2022 and ISU's defensive rotation system meant that while a lot of players played, there wasn't a single defensive player who stood out above the fray to emerge as the leader in production on the field.

"Defensively, it's going to be where we're at in the middle of our defense with our linebackers and inside guys. To build a defense, you like right at our middle linebacker and interior guys. That's where we've been strong in the past, but we have to continue to improve," Mallory said.

Recruiting for four-year players continues. The past season did not sway Mallory in any specific direction from his norm when it comes to recruiting philosophy.

"In recruiting, our focus will always be up front. You can never have too many lineman and we found that out this year when we got down to our seventh offensive tackle at the end of the season. We have to recruit big bodies on the offensive and defensive line," Mallory said.

As for those heavy losses to the MVFC teams above them? Getting more competitive against the playoff contenders in the league is a must. The schedule offers no breaks. Playoff teams Southern Illinois and South Dakota come off the schedule, but playoff team Northern Iowa comes back on. As does North Dakota, who was in contention for a playoff spot deep into the season. ISU's nonconference schedule offers little relief either as FCS playoff team Montana comes to Memorial Stadium next September.

"We lost to a Big Ten team [Northwestern] and five losses to teams in the FCS playoffs. Those teams got away from us score-wise, but we were better in those games. That's just my perspective, but we need to be closer in those games to make it to the next step," Mallory said.

"If we had been 6-5, we wouldn't have been out of [FCS playoff contention]. Northern Iowa made it, but we have to be closer against those teams that are making the playoffs," Mallory said.