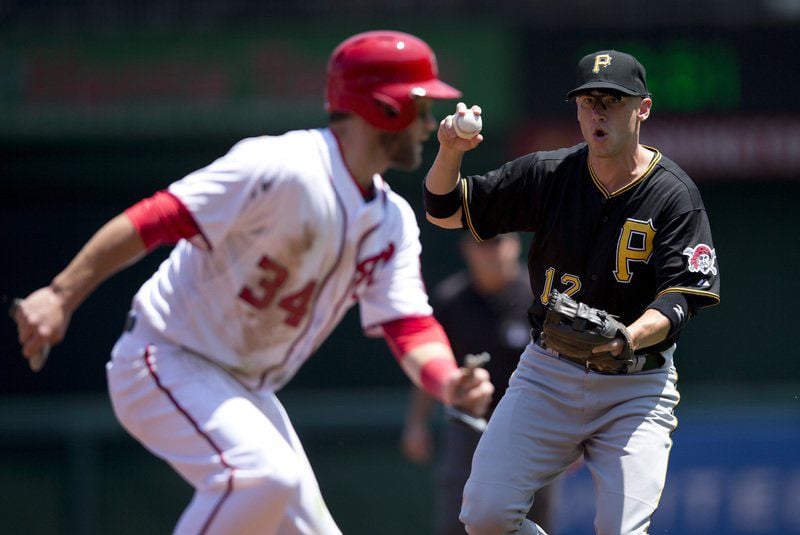 AP/Evan VucciRundown: Pittsburgh Pirates shortstop Clint Barmes (right) chases Washington’s Bryce Harper toward third base during a rundown in the first inning of a baseball game at Nationals Park on July 25, 2013, in Washington. 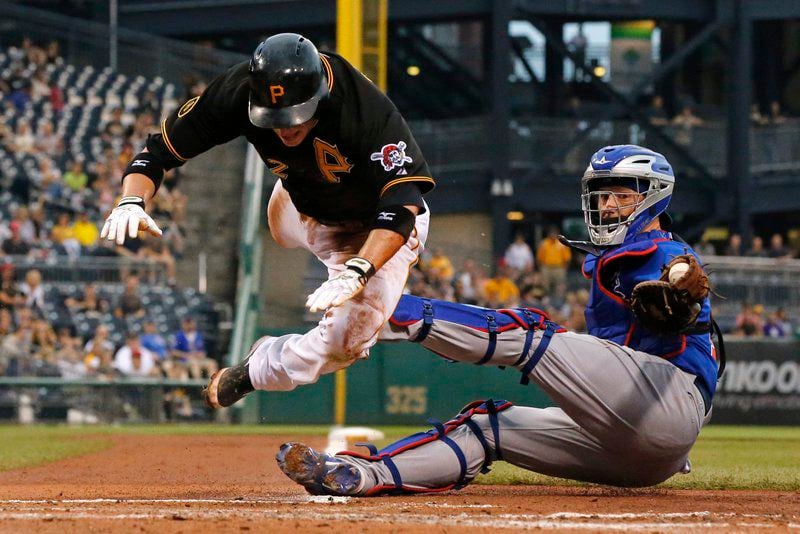 Chicago Cubs catcher John Baker tags out Pittsburgh Pirates' Clint Barmes who was attempting to score from third during the third inning of a baseball game against the Chicago Cubs in Pittsburgh Thursday, June 12, 2014. (AP Photo/Gene J. Puskar) 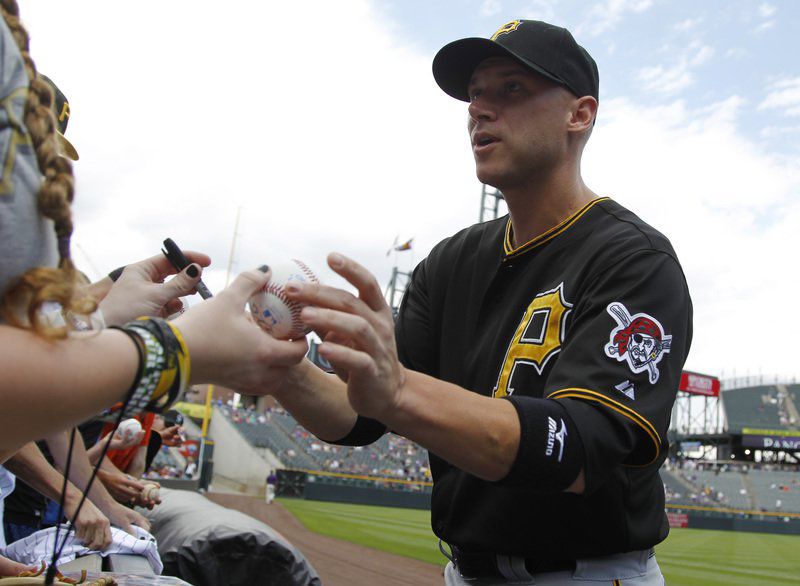 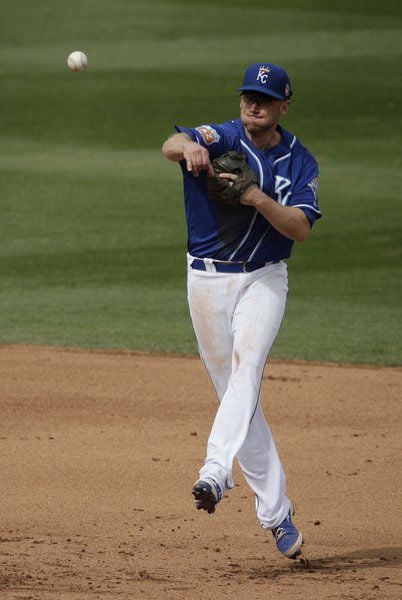 AP/Evan VucciRundown: Pittsburgh Pirates shortstop Clint Barmes (right) chases Washington’s Bryce Harper toward third base during a rundown in the first inning of a baseball game at Nationals Park on July 25, 2013, in Washington.

Chicago Cubs catcher John Baker tags out Pittsburgh Pirates' Clint Barmes who was attempting to score from third during the third inning of a baseball game against the Chicago Cubs in Pittsburgh Thursday, June 12, 2014. (AP Photo/Gene J. Puskar)

Clint Barmes had a 13-year MLB career known as one of the most reliable shortstops in the game, calling it a career at 37 years old on Tuesday.

Barmes only spent one season at Indiana State but he had a huge junior year after transferring from Olney Central Junior College.

Barmes holds ISU’s record for longest hitting streak, going 30 straight games in 2000 during a season in which he hit .375 with 10 home runs, 20 stolen bases, 18 doubles, seven triples and just eight strikeouts in 248 at-bats to earn Missouri Valley Conference Newcomer of the Year honors. The .375 batting average is the third best of the 21st century by an ISU player behind only Nick Ciolli (.401 in 2009) and Nevin Ashley (.382 in 2006).

While he impressed former teammates and coaches with his talent, his ability to work and prepare to win stood out as much as anything.

“When you think about Clint Barmes, a couple things come to mind: that’s a tremendous leader and a tremendous teammate,” former Sycamore Chad Zaucha said this week. “He was a high talent guy, but overall, I think what stands out the most about the time we spent together, is he’s a high character guy. Tremendous respect for the game. He played the game right.”

Indiana State coach Mitch Hannahs, an assistant under coach Bob Warn in 2000, said he doesn’t take any credit for Barmes’ development as a player.

“Guys develop themselves for the most part. There’s a little push here and there. Clint was one of those guys, he knew what he needed to do to become a better player,” Hannahs said.

Barmes spent three quality seasons with the Pittsburgh Pirates near the end of his career, playing a key role for a team that made the playoffs in 2013, losing to the St. Louis Cardinals. The Vincennes native made an impact on his manager and teammates there as well.

“Big heart,” Clint Hurdle said in a report on Pittsburgh’s triblive.com. “A lot of want-to. Small town, small college, and just worked. Had a lot of self-confidence. Dad and Mom raised him right. Tremendous relationship with his father, who he lost during his career. Had to find a way to work through that and continue to push on. I got to watch a lot of that development.”

Barmes was a career .245 hitter but was an excellent defender. Barmes ranks seventh among big-league shortstops in defensive performance since 2005, according to fangraphs’ sabermetric that calculates fielding runs above average (using Ultimate Zone Rating) plus positional adjustment.

Barmes, who also played his share of second base in the majors, was primarily an outfielder until his sophomore year at Olney.

Hannahs said ISU was in need of a shortstop and spoke with Olney coach Dennis Conley.

“He came in as an outfielder and his freshman year, he played some outfield and some third base,” Conley said. “As a sophomore, he converted over to shortstop and then he went to ISU, he played shortstop. Just a baseball player, I honestly think you could put him about anywhere. ISU came in and watched him, you could just tell he had the skills to play shortstop, he just needed game experience and repetition. He was able to do that.”

Hannahs said they took a chance and it worked out.

“We took kind of a chance on a guy that hadn’t played a ton of infield. A lot of times in this business you trust people,” said Hannahs, impressed by Barmes’ ability to be known as such a dependable glove man. “That’s a tribute to him. There’s a guy that just took thousands of ground balls and worked his tail off to be a quality infielder.”

Hannahs knew Barmes put up impressive hit totals at Olney, but the Sycamore coaching staff ended up with one of the most diligent to ever play at ISU.

“I don’t think anybody anticipated the package we were getting from Clint. He was mature beyond his years. He was a perfectionist but understood the hard work and continued hard work was how he mastered something,” Hannahs said. “When one of your best players is also the hardest worker, that usually propels the team to a lot of success. His work ethic has become legendary. If you talk to guys in professional baseball, what he does to prepare himself for a season. And what he did to mentor guys like [Pirates shortstop] Jordy Mercer and other guys about how to work and how to go about the business.”

Like Zaucha, Brazil native Brad Pierce enjoyed the opportunity to play with Barmes for one season. Pierce, who followed Barmes’ lead by going from Olney to Indiana State, was a teammate of Barmes at Olney, where Barmes racked up a school-record 172 hits. (Pierce and Brady Shoemaker are tied for second at 161.)

“He’d lead off the game with a home run about half the time,” Pierce said. “He was always a good team leader. Always took the time to work with the younger guys. Was never one to big league you, made you feel part of the team. he was a mentor for younger guys.

Barmes also played basketball at Olney as a freshman but Pierce recalls Conley making sure Barmes knew where his future was.

“We knew his sophomore year. He played basketball and baseball at Olney. Conley told him ‘your baseball future’s really bright.’ He almost got drafted out of junior college,” Pierce said.

Zaucha wasn’t surprised that Barmes took the reins as a big-league starter.

“I think I knew he had a chance. The odds of making it are so slim, but once we heard that Clint got drafted in the position he was in, we knew he had as good a chance as anybody else. All things equal, Clint wins. One thing we knew, he wasn’t going to get outworked,” said Zaucha, who made several road trips to see Barmes play.

Barmes played his final MLB season with the San Diego Padres in 2015. During a road trip to Pittsburgh, the Pirates played his walk-up music, Journey’s “Don’t Stop Believin” as the Pittsburgh fans recognized Barmes with applause.

Pirates fans recognized a man that put the team first. He was an easy guy to root for, Hannahs said.

“I took satisfaction in watching him play just because he was such a humble person, the kind of person you could root for all the time. There’s a lot of guys these days that carry themselves in a fashion that’s tough to respect,” Hannahs said. “Clint was the kind of guy you root for because he was the same guy talking to him at the end of last season that walked on the Olney campus and the ISU campus.”

Added Zaucha: “He was a leader in the clubhouse and a guy that united the team together. It was about the game and not about him. What he was  able to do was build trust and loyalty among his teammates. People were willing to follow him wherever he led them. You have that deep sense of pride and enjoy following them and wish him the best. He had a great run. Not too many people get to play in the big leagues for 14 seasons.”

• Colin Rea was demoted to Triple-A for a few short starts as the Padres have said they would like to limit his innings. In the majors, the former Sycamore right-hander has a 4.47 ERA with a 3-2 record, striking out 36 in 501/3 innings.

• Ryan Strausborger is producing at a career-best rate through 33 games at Triple-A Round Rock for the Texas Rangers, batting .330 with a home run, 19 runs scored and seven stolen bases.

• Josh Phegley was activated from the disabled list Friday by the Oakland Athletics. Phegley, who was hitting .270 in 13 games, has been out since May 9 with a knee injury.

A slight improvement in the walk rate would help him make the jump to the majors.

• Jeff Degano is still awaiting assignment with the New York Yankees. Many published reports have Degano, a former Indiana State and Terre Haute Rex southpaw, pegged as a relief pitcher who could begin to climb the Yankees organization quickly.

• On the disabled list since May 1, Chicago White Sox reliever Jake Petricka is still dealing with a sore hip. The former Indiana State standout has a 4.50 ERA and was struggling with too many walks in eight innings to start the season.

• Jeremy Lucas ranks third among Eastern League catchers with an OPS (on-base plus slugging) of .816. The former West Vigo and ISU backstop began the season with a power surge and walks at a high rate.

• A.J. Reed made his fifth appearance Friday night since returning from the disabled list with a hamstring injury, doubling in a pinch-hit opportunity. Reed is 4 for 17 with two doubles since his return and is slashing .231/.329/.446 with six home runs and 22 RBI.

• Former Terre Haute Rex shortstop Stephen Bruno is struggling since returning from the disabled list for Double-A Tennesee in the Cubs organization, batting .158 through eight games.

Craig Pearson can be contacted via email at craig.pearson@tribstar.com or by phone at (812) 231-4356. Follow on Twitter @TribStarCraig.