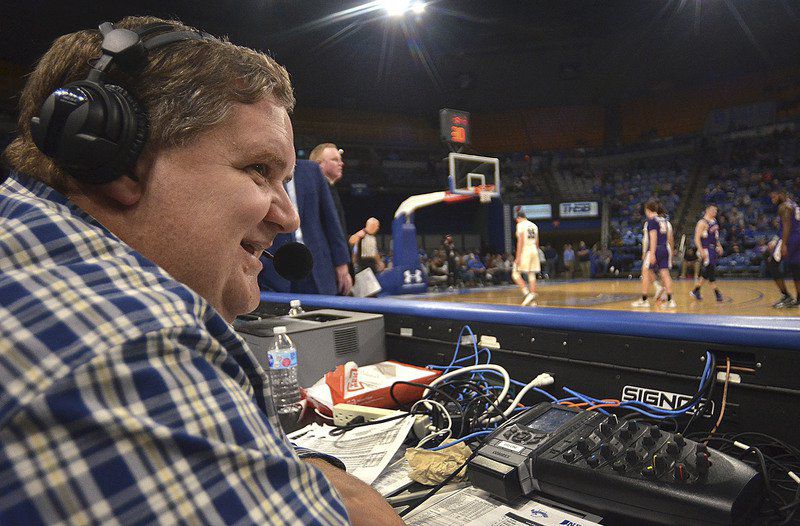 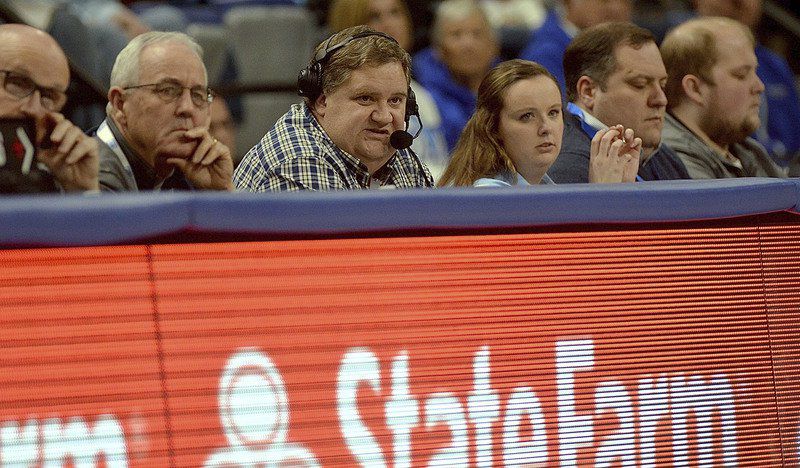 Tribune-Star/Joseph C. Garza On the airwaves: Brian Fritz has seen many memorable plays during his career at Indiana State as a color analyst and play-by-play announcer. Here, he calls the Indiana State men's basketball team's game against Evansville on Jan. 15 at Hulman Center.

Tribune-Star/Joseph C. Garza On the airwaves: Brian Fritz has seen many memorable plays during his career at Indiana State as a color analyst and play-by-play announcer. Here, he calls the Indiana State men's basketball team's game against Evansville on Jan. 15 at Hulman Center.

Former Indiana State men's basketball player Matt Renn is revered by Sycamores fans for his playing career. One that put him in ISU's Athletic Hall Of Fame.

These days, Renn is in his 13th season as the analyst on ISU's men's basketball radio broadcasts. Throughout his broadcasting career, Renn has worked with play-by-play man Brian Fritz.

So speaking as an ISU Hall Of Famer? And one who has learned the broadcasting game as well? Renn feels that Fritz should be lauded in the same way many long-time ISU athletic personalities have been over the years.

"I don't feel like he gets any of the attention he deserves. He's not self-promoting," Renn said of Fritz. "I think his loyalty and commitment to Indiana State in the last 20 years has been unmatched."

Yes, you read that right. Fritz is in his 21st season of broadcasting ISU athletics and 20th as the primary play-by-play man. And yes, Renn is right in that Fritz never seeks to be the center of attention.

However, 21 years is a significant chunk of time to spend broadcasting any team. The only other broadcaster who has been associated with ISU as long as Fritz is Bob Forbes.

What strikes almost everyone about Fritz? He cares about what he calls and he works hard.

"We've had several head coaches in basketball and football talk about blue collar and out-working the opposition. To me? Fritzy has always been that type of guy," ISU Sports Information Director Ace Hunt said.

Radio is not Fritz's full-time job. For many years, he's balanced his ISU radio work with a second job.

"His ISU part of his work life is only about 20 percent of his overall work life. He's worked at the TV station, at the bank, at the school, and he's a salesman now. It's always been a supplemental job financially for him, but in reality? He puts in as many hours as any else coming to practice, going on road trips and spending time in hotels away from his family. His service is a lot of sacrifice," Hunt said.

Fritz — who also calls football and baseball — came to ISU during the 1999-2000 season when the radio rights changed hands from WTHI to WTWO. He worked with John Sherman as a color commentator for one season before taking over the play-by-play role in 2000-01.

Fritz's dream of becoming a broadcaster long pre-dates his chance to broadcast a Division I program. Fritz was asked when he began to consider a career in radio.

"As soon as I figured out I wasn't a good enough athlete to continue in sports," said Fritz in the droll manner in which he sometimes calls games. "I think anyone who gets involved in these jobs has a lot of sports. I knew if I was going to be involved in athletics in any kind of way, it would have to be in a different capacity. I always felt like I could talk about games and communicate what was going on. I got involved at the college radio station and got into it."

"I got different styles from announcers. You start out doing that, but then you realize it's your own voice and you have to do some things on your own. You have to be yourself," Fritz said.

So how would Fritz define being himself?

Fritz's on-air style isn't in-your-face. He calls the game in an even-keeled manner. Fritz said he values giving time and score over everything else, an old school conceit sometimes lost in a broadcasting era where the loudest voice sometimes gets the most attention, regardless of attention to detail or preparation.

Fritz learned as he got more experience to pick his spots when it's time to get excited.

"When you're younger? You get more amped up. When you see more games. You're more reserved and even-keeled. Your style adapts along the way to where you are in your life journey a little bit," Fritz said.

Hunt said he thinks Fritz gets the right tone in his broadcasts.

"He's been able to pick the really big moments to get excited. He starts out games at a certain level. He picks the moments really well when he gets super excited. He also knows the moments when you have to be super down and play that to the masses. The Sycamore fans want their home radio guy to mirror what they're feeling to. That's one thing I've always respected about him," Hunt said.

Working a game means working with a partner. In that respect? Fritz and Renn have become a tandem ISU fans cherish. Fritz gave Renn his on-air training back in 2007 when Renn joined the broadcast.

"He was great. I was always pushing for feedback and helpful hints along the way. He took what I brought to the table and refined it more than anything," Renn said.

Fritz said Renn's transition has been easy since he knows the game so well.

"Matt is unbelievable at what he does. The best thing I can do is let him talk. I view my role as adjusting to how I can best utilize Matt," Fritz said.

Renn acknowledges that, but also knows Fritz knows his basketball too.

"Don't let him fool you. He's super sharp and knows his basketball, but he also knows what I'm thinking. That chemistry helps. He knows what my thoughts are going to be and he does a good job of leading me there," Renn said.

It isn't always a rosy picture Fritz has to paint for his listeners. He's endured some difficult football and basketball seasons through his time, including ISU football's nadir in the 2000s when it won two games between 2005-09.

Fritz said he learned about interpersonal relationships when he worked with the late Royce Waltman from 1999-2006. The coaches he has worked with have given him high marks on how he handles his profession. ISU men's basketball coach Greg Lansing's relationship with Fritz goes all the way back to his first stint as an assistant under Waltman.

"He's a good person and he cares about Indiana State and the players and staff individually. I go out of my way to listen to baseball and football games when I can't be there because he's the consummate pro," Lansing said.

Twenty-plus years is a long time to call games. How long does Fritz, 46, plan to keep going? With his stepdaughter Hannah, 9, and his son Carter, 2, getting older? His life's journey might be dictated by where their life takes them.

"I'd like to do it as long as I don't feel like I'm missing activities for my kids I'd want to be it. I've spent a huge part of my life watching people and kids and compete in games. When I get to the point in my life when I can experience that as a parent? I'm not going to miss out on that," Fritz said.

Until that day comes, Fritz will endure as the voice of the Sycamores. He's become as much as part of ISU athletics as any personality has in the 21st Century.