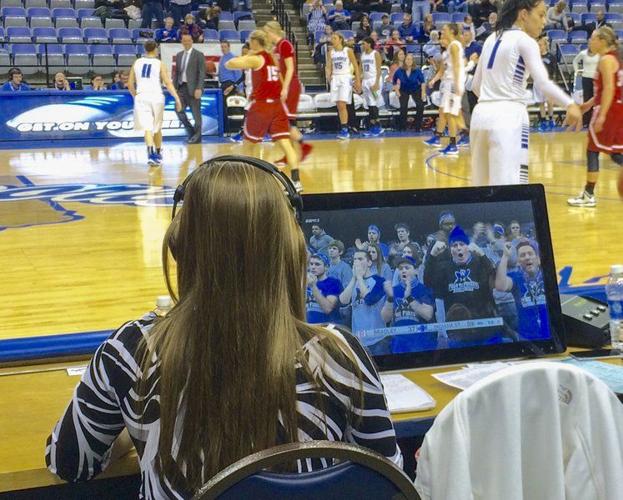 Tribune-Star/Austen Leake Best seat in the house: Indiana State senior Abbie Malchow was on the call for the ESPN3 stream of the Indiana State women's basketball game against Bradley earlier this season. 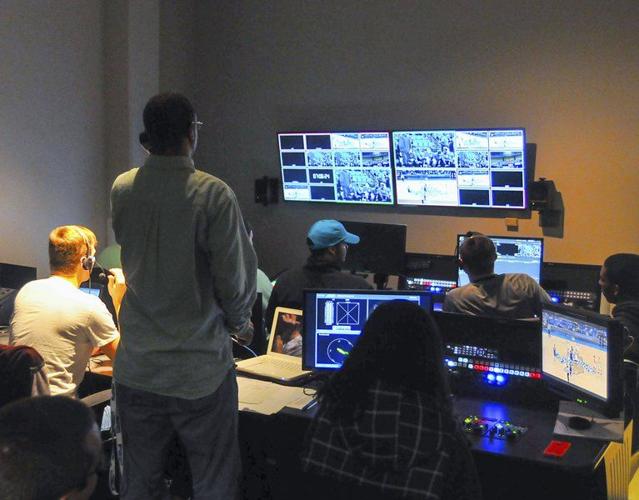 Tribune-Star/Austen Leake Ground control: The control room in the basement of Dreiser Hall on Indiana State University campus works to stream the Indiana State men's basketball game against Drake over the Internet earlier this season. 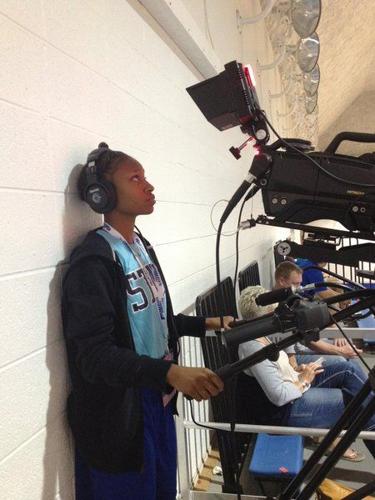 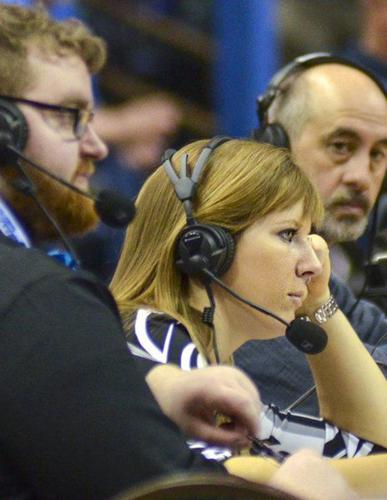 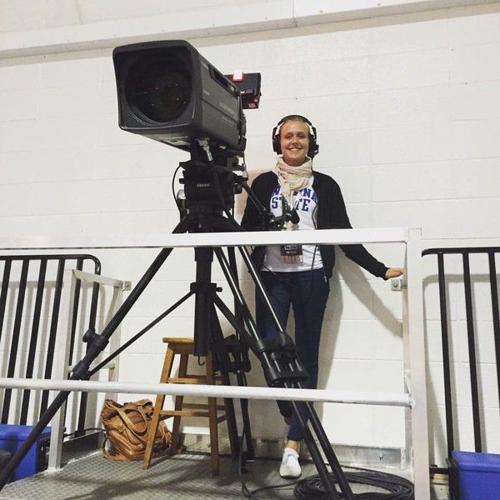 Tribune-Star/Austen Leake Best seat in the house: Indiana State senior Abbie Malchow was on the call for the ESPN3 stream of the Indiana State women's basketball game against Bradley earlier this season.

Tribune-Star/Austen Leake Ground control: The control room in the basement of Dreiser Hall on Indiana State University campus works to stream the Indiana State men's basketball game against Drake over the Internet earlier this season.

The family of a prospective basketball recruit at Indiana State can sit in a living room and stream a broadcast of nearly every Sycamores game thanks to The Valley on ESPN3, the product of a 10-year deal between the Missouri Valley Conference and ESPN.

By the 2016-17 school year, football, volleyball, men's and women's basketball, baseball and softball all will be able to boast that any home game or road conference game will be available for live and archived viewing.

It's a powerful marketing tool, without a doubt.

"I use ESPN 3 as a recruiting tool. It allows prospective student-athletes to watch us play on a regular basis," ISU women's basketball assistant coach Janet Eaton, the team's recruiting coordinator, said. "Also, I discuss career opportunities with anyone that is interested in majoring in communications.

"Secondly, when they watch it's always a text following the game saying good job or hey we'll get them next time ... that's always a plus."

In its first year, the ESPN3 model also is proving to be a valuable tool for students — and a few student-athletes — who have aspirations in broadcasting. The ESPN3 broadcast is put together by student freelance workers from the camera crew to the production staff and the on-air talent.

A senior who played for Indiana State's first NCAA Tournament softball team last spring, Abbie Malchow is the color commentator for many of the Indiana State women's basketball home games. A communications major, Malchow got her feet wet during the volleyball season in the fall.

"I knew the basics [of volleyball], but when it comes to all the ins and outs I was a little nervous. But I had played basketball all my life so I was a lot more comfortable with that," Malchow said.

During a recent live broadcast, Malchow praised ISU women's basketball player Alexis Newbolt for her hustle to get back on defense following a turnover.

At the same time Malchow describes the action, in the basement of Dreiser Hall, communications major Morgan Gibbons is instructing technical director HyeIn Ko to switch to the proper camera shot that will be disseminated around the globe via ESPN3.com.

Universities around the nation, Indiana State included, have tried varying models of producing their own live video of sporting events witht varying degrees of success in recent years.

There's no doubt the deal with ESPN is an enormous upgrade.

"From our standpoint, it gets our brand out there every game," said John Sherman, ISU's senior assistant athletic director for marketing and media relations. "The kids have done a great job with it. It promotes our program, it promotes our student-athletes and our fans get to see it from anywhere in the world."

Getting it started (subhead)

Chris Jones, who spent 18 years working behind the scenes at ESPN, was hired last fall as the sports video manager at ISU. His job is to oversee the ESPN3 operation. Jones, a victim of ESPN's extensive layoffs in 2015, jumped at the opportunity to work on a campus with young people aspiring to get into the field.

Jones arrived on the ISU campus Aug. 17 of last year.

"I came into an empty room with no technical equipment and three weeks later we were doing live volleyball on ESPN3," Jones said.

Fiber optic cable had to be run from the ISU Arena, Memorial Stadium and Hulman Center to the control room in the center of campus to broadcast volleyball, football and basketball games in the inaugural year.

"The plan is for five venues to be up and running next [academic] year," Jones said, with Price Field and Bob Warn Field up next. "Those venues will be up and running, the timeline is by next year. Next year, we plan to be doing soccer, volleyball, football, basketball, baseball and softball."

This has been a busy first year already for Jones, who also led the way in the production of a live YouTube broadcast of Indiana State football's signing day.

"Collectively, we’ve done upwards of forty to fifty games," Jones said during an interview last month in Hulman Center. "The students have grown. September was our first-ever volleyball game. There were a lot of students hesitant about what to do. Even though it’s on ESPN3, it’s still the ESPN name. Whether it’s behind camera or on camera, September for volleyball, there was nervousness behind the camera, control room and on the mic."

Indiana State women's basketball player Freja Christensen is a sophomore who's looking forward to the production of more sports on campus. Between road trips and busy practice schedules, working basketball games was not a good fit.

However, Christensen, a native of Denmark, was one of the first eager students ready to get involved when the program was announced. She began by working behind a camera.

"The first semester we did all the volleyball games," Christensen said. "It was amazing. It was really fun to try. I’ve always wanted to try broadcasting. It was fun to stand with all the equipment. You feel really professional when you do it. That was really great."

For Newbolt, it wasn't as easy as just standing behind a camera, the senior communications major explained.

"Just for me, being excited to see a good play and realizing I still have to operate the camera," she said. "Realizing that I’m actually working. Following the game wasn’t hard. It was just remembering that I’m shooting a live event that’s on ESPN."

In the basketball arena, it's about more than just following the ball. Those at Hulman Center have learned the tricks of keeping an eye out for things like toddlers in cheer outfits that make for solid shots coming back from a timeout, which drew praise from Jones during the Sycamore women's basketball win over Bradley in late January.

"The growth from September to now has been 100 percent. The announcers are improving.  We cover it fairly for both sides and for the conference. I’m not saying the volleyball show was a bad show. But you can definitely tell the difference between that and now," said Jones, who provides constructive criticism for the students. "I'll send the announcers a report in email on strengths and weaknesses and how they can improve."

In the next couple years, Christensen hopes to be in the control room making the calls to switch to the shot of the cute kid or the injured player on the bench or the animated coach.

"My goal is to try to learn everything," Christensen said. "I want to be able to work in the control room, master the camera. I want to say I can do everything. That should look good on my resume."

Newbolt said the work was valuable beyond just the experience.

"I’m glad they have something like this that’s student ran. Not only does it look good on the resume, but you meet so many good people. Now I have more friends than I’ve ever had outside of the basketball team," Newbolt said.

The chance to work for ESPN is valuable for those with focuses on everything from electronic media to graphic design to journalism.

"I think it's good experience for anything," said softball player Kelsey Montgomery, who is studying journalism and has interned with the ISU media relations department. "Not only being able to write, but being able to get footage is really important."

Christensen is confident the program will help her get a better focus on her career goals as she progresses toward graduation.

"Right now, I’m trying to take it one step at a time. ESPN3 is a great place to start," Christensen said.