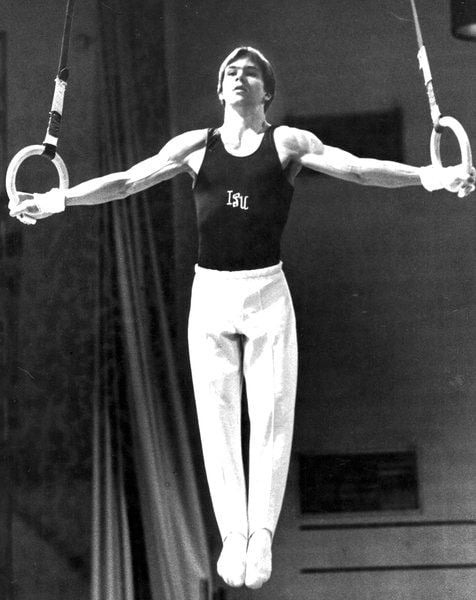 Submitted photoThe GOAT: Kurt Thomas was a five-time national champion and a 14-time All-American while a gymnast at Indiana State. 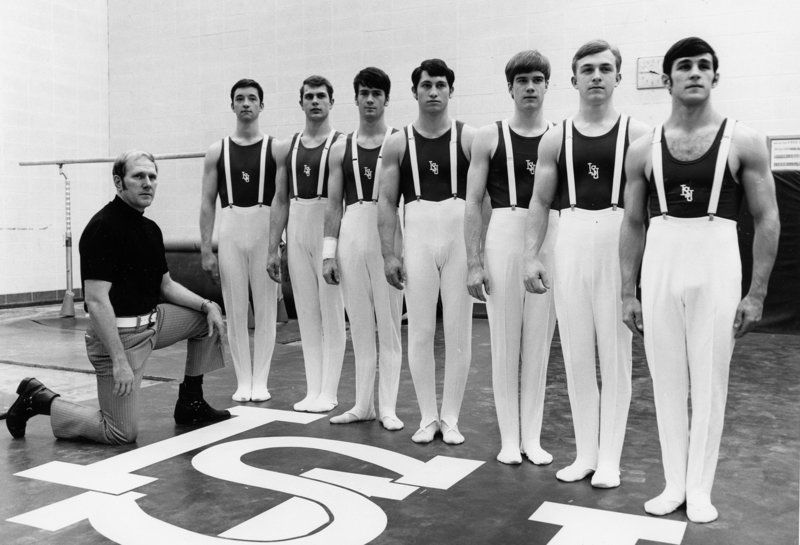 Submitted photoThe GOAT: Kurt Thomas was a five-time national champion and a 14-time All-American while a gymnast at Indiana State.

Never did the subjective world of college gymnastics judging mean so much to Indiana State as it did in early April of 1977.

After trailing Oklahoma by four points — huge in a sport that comes down to a few thousandths of a point — in the national championship meet, the Sycamores had battled back until the meet's outcome came down to vaulter Bruce Spikerman, the final competitor of the meet. A score of 9.50 would give ISU the national championship. A score of 9.45 would mean a second-place finish.

The score? 9.475. A tie with the Sooners and a share of the national championship.

It was probably the biggest moment in ISU gymnastics history. And since it was the only Division I team national championship in school history (not to mention the only national-championship tie in any sport in NCAA history) and is still preceded by the adjective "probably," that should indicate just how many great gymnastics moments there were in the years between 1963 and 1980 under legendary coach Roger Counsil.

Counsil and the 1977 team — which will be honored in Hulman Center at some point during the upcoming basketball season — are the pinnacles of the sport at ISU; in his 18 seasons, Counsil coached 50 All-Americans and 13 national champions. But this Daily Top 5 is concerned only with individual athletes.

And if you remember how tough the criteria was to be in wrestling's Top 5, ask Curt Hahn, Jim Price and Ken Scorra about how tough it is to make this list. They are national champions (1964 sidehorse, 1968 trampoline and 1964 horizontal bar, respectively) who didn't make it (to be fair, the pre-1969 accomplishments came in Division II).

So here's the Daily Top 5. The suspense to see who is named No. 1 must be killing you.

4. Rick Danley — The 1974 horizontal bar national champion who finished sixth one other season and was still around to score points for the national championship team. Terre Haute North gymnastics fans may remember his wife Ruth, who coached the Patriots for a year or two.

My friend and fraternity brother Kevin Murphy, who helped tremendously in putting this list together, may have been a little frustrated as a result (notice a few paragraphs previously).

2. Dave Seal — Speaking of frustrated, another former gymnast who helped this endeavor was Doug Taylor, who was at Indiana State at the same time as Morgan, Mahorney and Seal — national champion in 1970 and 1972 and third in 1971.

"No wonder I hardly ever competed on rings," Taylor emailed. "Seal, Mahorney, and Morgan . . . But I have the shoulders to prove it (ouch)."

And while Murph and his guys have been complimentary to me about helping put their sport on the map, a lot of the credit goes to a cute little girl named Jane Taylor. Jane — who as far as I know remains Mrs. Jane Seal to this day — dropped in at The Statesman office to ask me, the sports editor, if she could help out with gymnastics and the rest is history.

1. Kurt Thomas — Fun fact: even though Kurt is known for the Thomas Flair, the pommel horse routine that was also the basis for the martial-arts aspect of "Gymkata," he was never the national champion in that discipline — third in 1977, 1978 and 1979.

He did, however, win five national championships (all-around in 1977 and 1979, parallel bars the same two years, horizontal bar in 1979) and a total of 14 All-America honors (at least one in every event but floor exercise, another place where the Flair showed up from time to time). Then there were his world championships, plus whatever immortality he might have attained by competing in Moscow in 1980.

RIP my friend. You are the GOAT, and I'm not necessarily talking merely about ISU.