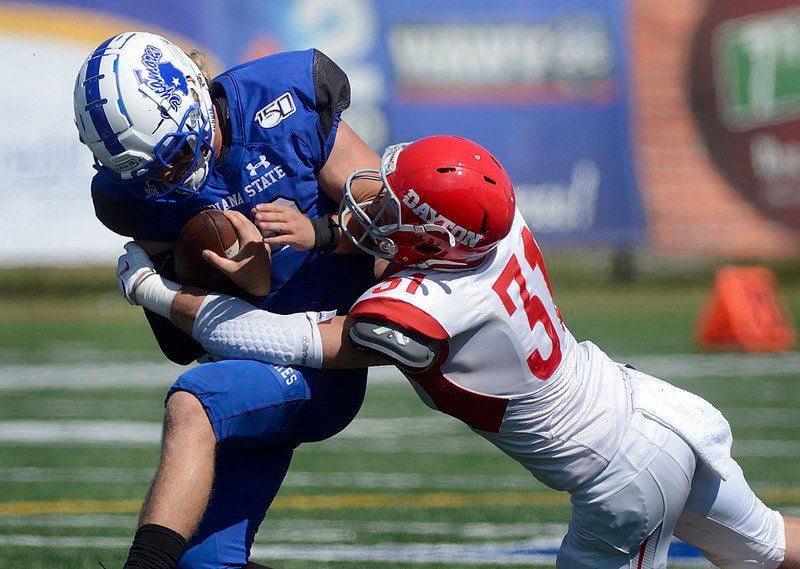 No longer a Sycamore: Indiana State quarterback Ryan Boyle is tackled by Dayton safety Tim Simon after he kept the ball and ran for a gain in yardage during the Sycamores' 42-35 last season at Memorial Stadium. 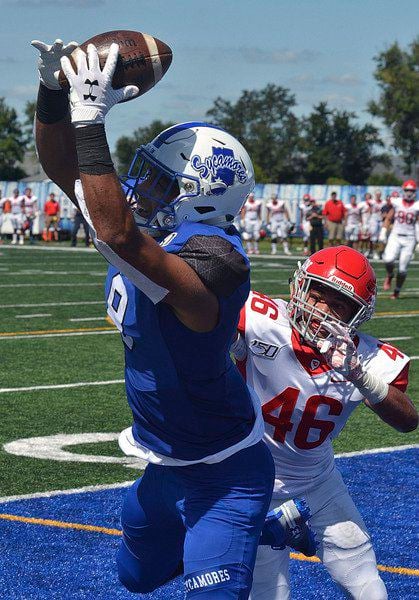 In the corner and out of your reach: Indiana State wide receiver Dante Hendrix makes a catch in the end zone and scores as Dayton cornerback Christian Kelly looks on during the Sycamores’ 42-35 loss last season at Memorial Stadium. 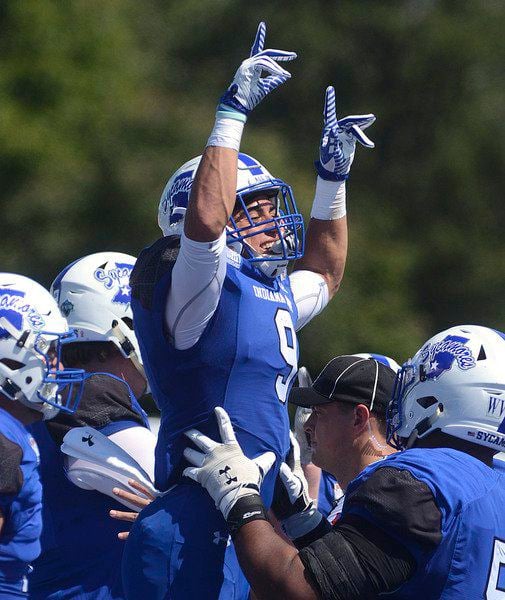 Making it a game: Indiana State running back Peterson Kerlegrand celebrates with teammates after he scored during the Sycamores’ 42-35 loss to the Dayton Flyers last season at Memorial Stadium.

No longer a Sycamore: Indiana State quarterback Ryan Boyle is tackled by Dayton safety Tim Simon after he kept the ball and ran for a gain in yardage during the Sycamores' 42-35 last season at Memorial Stadium.

In the corner and out of your reach: Indiana State wide receiver Dante Hendrix makes a catch in the end zone and scores as Dayton cornerback Christian Kelly looks on during the Sycamores’ 42-35 loss last season at Memorial Stadium.

Making it a game: Indiana State running back Peterson Kerlegrand celebrates with teammates after he scored during the Sycamores’ 42-35 loss to the Dayton Flyers last season at Memorial Stadium.

What was once the big offseason day in college football — February signing day — has been usurped by the early signing period in December.

That means the long list of new players you once saw on the first Wednesday of February isn't very long anymore, but it doesn't mean that teams don't take the opportunity to continue to get better.

Apart from that? The names you saw in December are the players the Sycamores are riding with right now. ISU coach Curt Mallory spoke with the Tribune-Star on Wednesday about where the football program is headed.

Before ISU moves forward, there's one player it won't be moving forward with. Mallory confirmed that quarterback Ryan Boyle won't be back with the Sycamores for the 2020 season.

Boyle injured his ACL in his left knee during ISU's 16-6 win against Eastern Illinois on Sept. 21, 2019. Boyle was lost for the season and there was a question mark whether he'd be able to return at all. Boyle's fifth-year senior status and the fact that he played in the fourth game of a 12-game schedule, past the 30 percent threshold that's usually the standard for someone to qualify for a medical hardship waiver.

However, Boyle was granted a hardship waiver to return for the 2020 season if he wanted to, but Mallory explained that Boyle elected to move on.

"We would love to have Ryan back. We met right before Christmas. I told him to be around his family, enjoy the holidays, watch a lot of college football, and we'll talk after the national championship game. We talked a lot throughout the break and I think at the end of the day, he said this team deserves a quarterback who's all in and he was ready to move on with his life," Mallory said.

As there is with any injured player, there was uncertainty over the medical hardship waiver for a while. However, Boyle also had a difficult rehabilitation in front of him to get back into playing shape.

"I think we all felt there was a good chance, but you never know. When he did get it? He's been through rehab before with his left ACL. Now this was his right ACL. He knows what it entails. He was way ahead of schedule, but there's rehab to live a normal life and there's rehab to play football at a high level," Mallory said.

Mallory said one thing he would change is the timing of when he told Boyle about the possibility of a return.

"Going back? I should have approached him with it that next day. I think he looked at it like, 'I'm hurt. It's over.' I don't think that thought every crossed his mind. When I approached him a week after, I think he thought, 'Wow, I thought I was done,' " Mallory noted.

With Boyle gone, Kurtis Wilderman is the current starter. Gunnar See, who started in ISU's game against South Dakota in the Missouri Valley Football Conference opener, was also granted a medical hardship waiver after he missed most of the 2019 season. He returns as a sophomore in eligibility. Michael Haupert remains as a Wildcat option.

ISU is still looking for quarterbacks. Former Northern Illinois quarterback Anthony Thompson (no relation of Terre Haute native and Indiana running back legend Anthony Thompson) will make a visit to ISU this weekend as FCS schools can still recruit in February.

ISU always recruits quarterbacks in its freshman classes and Mallory is pleased to have signed Cade Chambers from Maryville, Tenn.

"We're always going to take a quarterback. We have the incoming quarterback, Cade Chambers, that we're excited about. He was our number one quarterback from day one," Mallory said.

Mallory said there were a few priorities in recruiting this season. One was to build offensive line depth after several seniors moved on. Another was to get taller at both the wide receiver and cornerback spots. ISU also wanted a couple of bigger running backs to complement Peterson Kerlegrand and Titus McCoy.

"I think up front is where we started. We had to replace a lot of seniors. That was the biggest position group we replaced. We went after some youth and some transfers and we hit on every kid we went after. We exceeded our expectations there," Mallory said. "We wanted to get more size at wide receiver, more length. We were able to do that with [Minnesota transfer] Harry Van Dyne. He's 6-foot-5 and a 215-pound wideout. We also got two big backs."

The big backs are Malik Ingram and Derrick McLaughlin. In addition to Van Dyne, Ellison is a 6-foot receiver from Louisville. He never played for the Boilermakers.

After Boyle got hurt, ISU was somewhat compromised offensively. Eventually, the Sycamores turned to a double Wildcat of sorts with Haupert and graduated converted wide receiver Dominique Dafney. ISU will likely try to return to a more traditional offense in 2020 with the running game being the priority.

What gives Mallory optimism? ISU's leadership and overall health stand out for him at present.

""We finished with three wins. We're going to build on that and carry it in to the offseason. You don't just do that unless you have a team that cares about one another," Mallory said. "We have a closer-knit group then we've ever had. We have leadership in every position room and I couldn't necessarily say that a year ago. A year ago, you had Ryan Boyle and Jonas Griffith. In every room, you can just feel it that there's somebody in every room. That's been a big push."

One thing Mallory has done is to assign one representative from all 10 units on the team. He then conducted a draft where each representative has eight players he's responsible for. Those teams will compete in offseason activites. Among them was a spirit competition at Wednesday's ISU men's basketball game.

Mallory noted that a far healthier team in the offseason than ISU had at this time last year is a big deal. You can't get bigger and stronger if you aren't healthy enough to work out.

"Last year, we had a lot of players miss all of the offseason. This is the healthiest we've been in the offseason. Our gains [in terms of weight and muscle mass] from the offseason to now have been the biggest we've had since I've been here," Mallory said.

ISU will have its Pro Day on March 30 and spring football will begin on March 31. The spring game is scheduled for May 2.