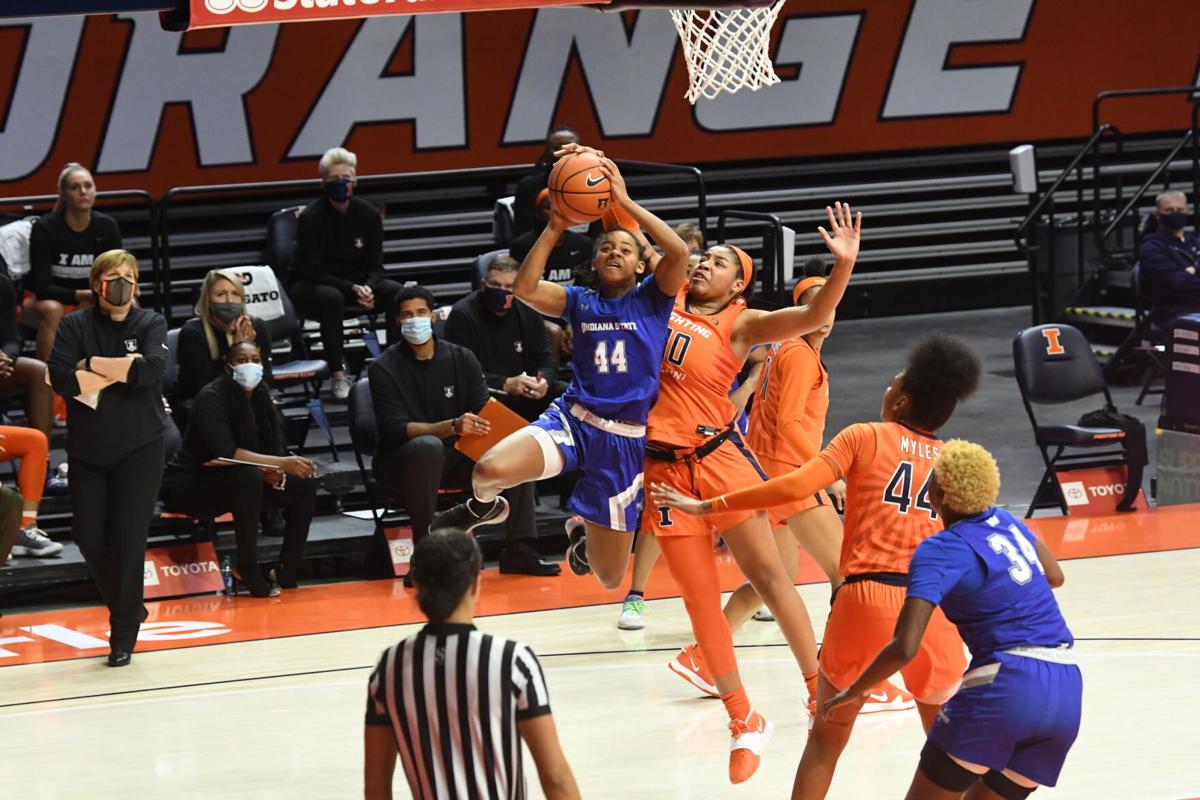 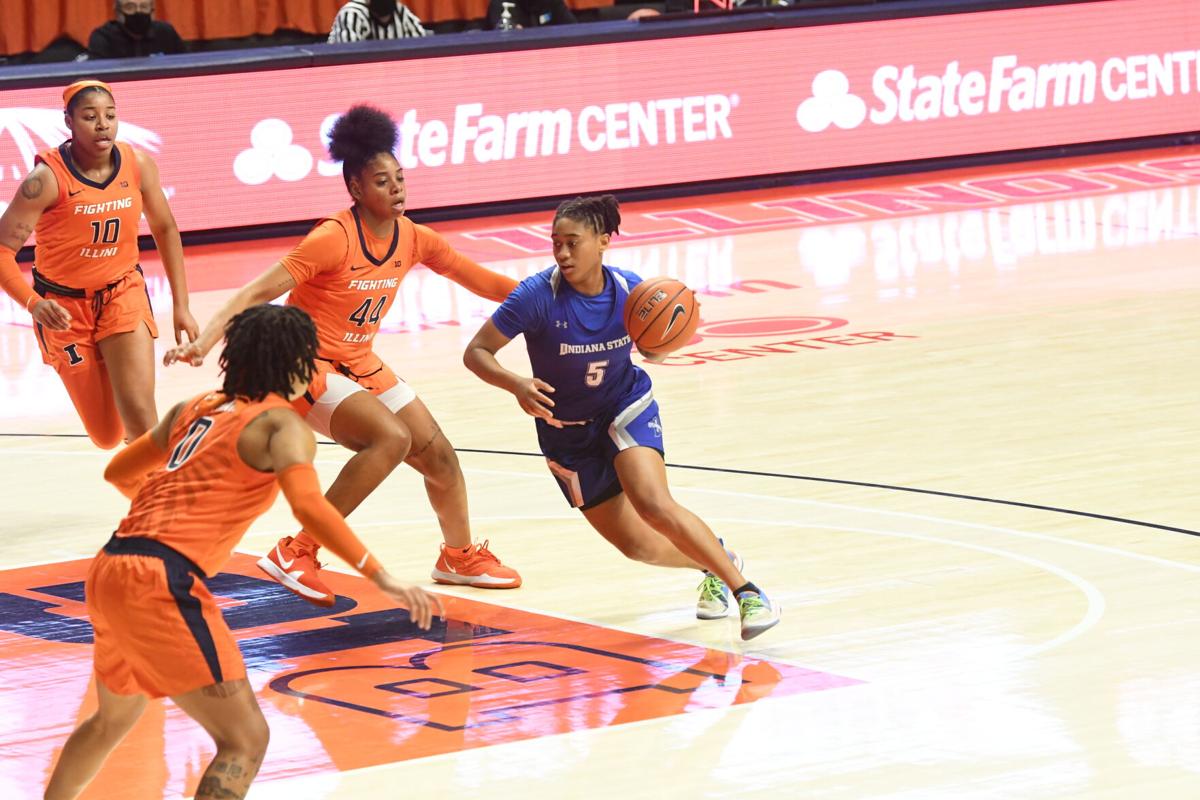 Hunter is the hunted: Indiana State's Marie Hunter (5) dribbles down the lane and around Illinois' Kennedi Myles during a women's basketball game Wednesday night inside the State Farm Center at Champaign, Ill.

Hunter is the hunted: Indiana State's Marie Hunter (5) dribbles down the lane and around Illinois' Kennedi Myles during a women's basketball game Wednesday night inside the State Farm Center at Champaign, Ill.

On the bright side for Indiana State, sophomore Caitlin Anderson came off the bench to fire in 19 points and grab four steals and senior Jamyra McChristine hauled down 13 rebounds.

But the ISU women’s basketball team, playing without three of its best players from last season, shot only 28.6 percent from the field and lost its 2020-21 opener to Illinois 68-49 Wednesday night inside a mostly empty State Farm Center.

Because of COVID-19 guidelines, no fans were allowed inside the facility, There were players, coaches, trainers, referees, ushers, other security/building personnel and media members . . . and that was about it.

Before the contest, the song “Lift Every Voice and Sing” was played over the public-address system before the national anthem, which was accompanied by several U of I players and staff members kneeling near midcourt.

The Fighting Illini jumped out to an 8-0 lead in the first 3 1/2 minutes. Six of those points belonged to sophomore guard Jeanae Terry, who finished with a game-high 24.

Trailing 10-1, the Sycamores pulled within 10-4 on a 3-pointer by Australian transfer Essy Latu, who started in her first appearance for coach Vicki Hall’s squad.

ISU need all the help it could get, because LeAndra Echi, Jasmine Elder and Del’Janae Williams — all standouts at different times during the 2019-20 season — missed Wednesday’s action because of various medical issues.

Illinois took a 15-10 lead into the second quarter and stretched it to 26-12 on an 8-0 run that included a pair of inside buckets by 6-foot-3 junior Geovana Lopes at the midway point.

The visitors cut their deficit to 28-21 late in the first half on a three-point play by freshman Kallyn Stumbo.

The Illini regained the momentum, however, by racking up the first six points of the second half and padding their cushion to 36-21. Their margin grew to 45-24 with 3:40 left in the third frame, although ISU pulled within 50-32 on a spinning jumper by Anderson.

Anderson tallied the first basket of the fourth quarter to slice ISU’s deficit to 50-34, but the home team rattled off nine unanswered points to charge ahead 59-34. Illinois’ largest margin was 27 (65-38), which came on a pair of free throws by Lopes with 3:35 remaining.

The Sycamores connected on only 18 of 63 field-goal attempts. And if you subtract Anderson’s 7-for-15 marksmanship, the rest went 11 of 48.

"It was a difficult night for us," Hall admitted. "We didn't handle their height or their girth very well at all and that was disappointing. But, you know, we kept fighting.

"We were rebounding with them pretty well [with the Illini owning a 42-40 edge]. What the big difference in the entire game was, was shooting percentage. We got good looks, but we just couldn't put 'em down. We've just got to get better."

Hall praised Anderson's efforts as pretty much the lone ranger on offense.

"Caitlin Anderson, she's hard to stay in front of," the Sycamores' coach mentioned. "People are going to have a hard time figuring that out."

Anderson didn't feel much like talking about her individual statistics after the game, considering ISU is now 0-1 for the season.

"We've just got to get back in the gym and work after it," she emphasized.

Besides Terry, Illinois' other double-digit scorer was Lopes with 12 points. The Illini ended up shooting 40 percent from the field (22 of 55).

Indiana State will try to bounce back Sunday afternoon at Detroit Mercy. Illinois (1-0) will be at home next Wednesday to take on Valparaiso.

Drew A. Jewell, 64, of Martinsville, IL, passed away Jan. 21, 2021. A walk-through visitation will be 12 noon to 2:00 PM Saturday at Pearce Funeral Home with burial following in the Ridgelawn Cemetery. www.pearcefuneralservices.com