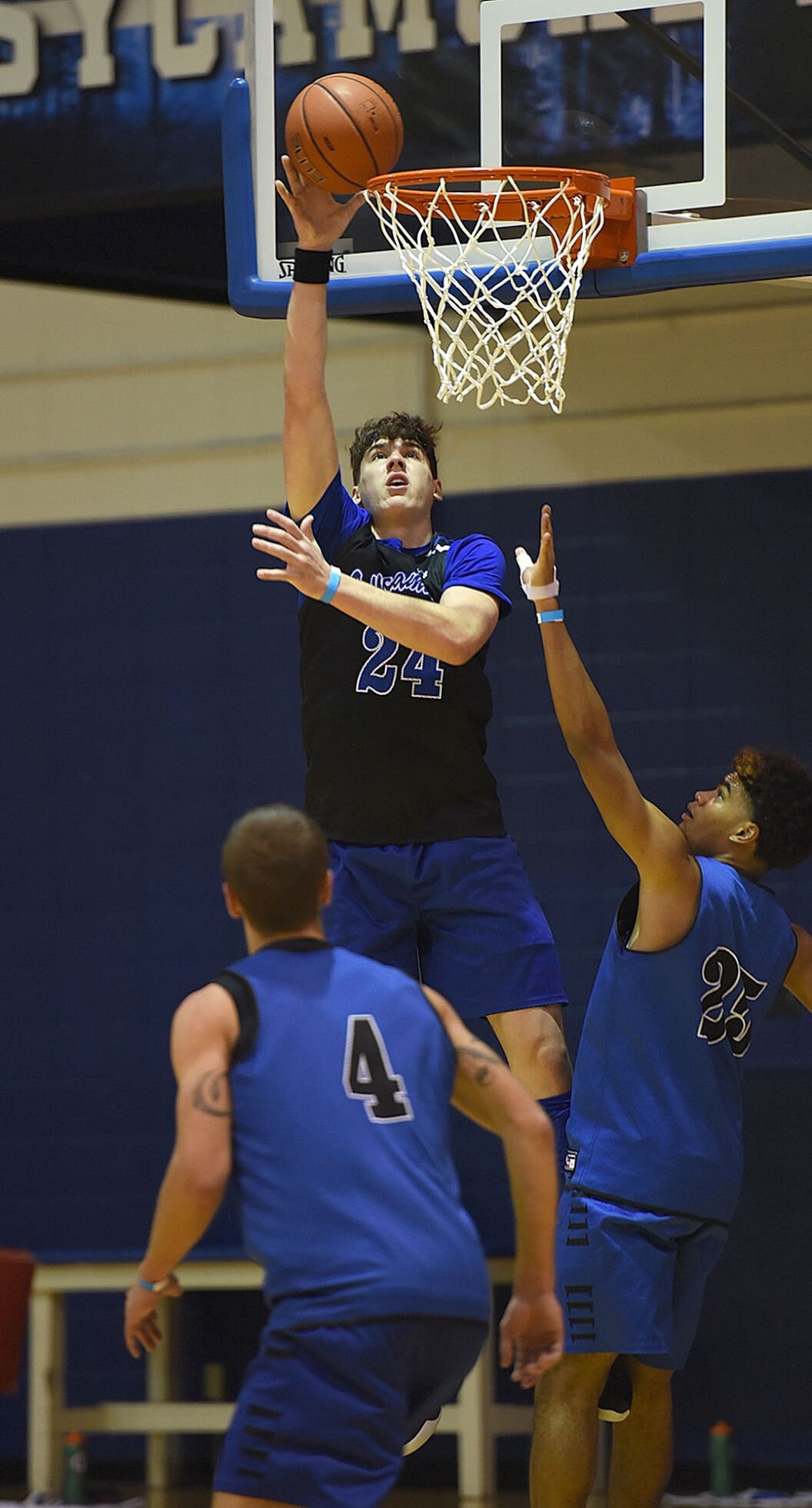 No one there to stop him: Indiana State's Jake LaRavia scores on a reverse drive during the Sycamores' team practice Wednesday in the ISU Arena. 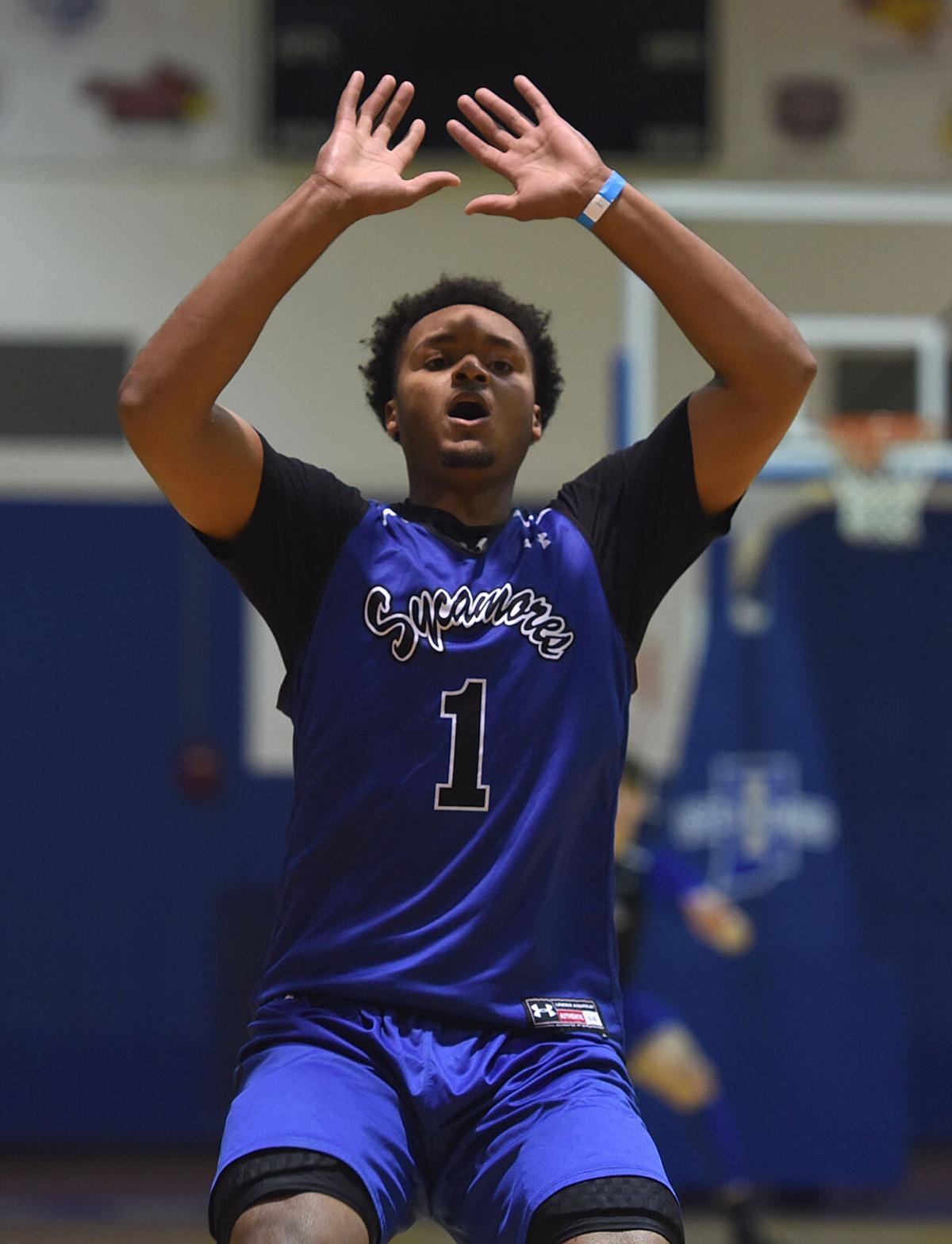 Defense wins games: Indiana State's Tre Williams throws up his hands during an all-court defensive drill during the Sycamores' team practice on Wednesday in the ISU Arena.

No one there to stop him: Indiana State's Jake LaRavia scores on a reverse drive during the Sycamores' team practice Wednesday in the ISU Arena.

Defense wins games: Indiana State's Tre Williams throws up his hands during an all-court defensive drill during the Sycamores' team practice on Wednesday in the ISU Arena.

We’re zeroing in on Thanksgiving Day, the time where we contemplate what to be thankful for.

When it comes to Indiana State’s men’s basketball team, they don’t need to wait for the holiday to figure out what they’re grateful for.

Just being able to be on the floor at ISU Arena and practicing was reason enough to appreciate their lot. After a six-day COVID-19-related pause, ISU has gradually returned to action this week.

Tuesday’s session consisted of a light workout. Wednesday’s session – only nine players were available – was intended to be a full-on practice, but Jake LaRavia was dinged up early in practice and ISU coach Greg Lansing elected to play it safe and reverted to light shooting.

“It feels good to be back in the gym. We needed it. Six days out is a long time. East Carolina hasn’t been out for six days so we needed to get back in the gym and get locked in,” said LaRavia, referring to ISU’s opening opponent next Wednesday at the Gulf Coast Showcase.

By now, players and coaches are painfully aware that they have to bob-and-weave with the conditions COVID-19 creates for them. The days where one might fret about losing a few minutes of practice or having a player on the sideline have largely withered away into just a general sense of appreciation that they get to play at all.

“The closer you get to game-time and you can’t get in? You don’t know what to expect,” ISU guard Cooper Neese said. “It’s an accomplishment for our athletic training staff to get us back in here in six days.”

For ISU guard Tyreke Key, the quick return from the COVID-19 pause was especially welcome. Key sat out the early part of November after having an injection for an ailing tendon in his knee.

Every team in the country is having to roll with the punches. It’s stressful, but it makes the time all teams have together that much more valued.

“It was waiting in my truck for an hour-and-a-half yesterday just waiting to go,” said ISU coach Greg Lansing, who tweeted a photo of his truck wait on Tuesday. “When we got in, seeing Jake LaRavia’s reaction was like a big win. There was a little bit of a celebration. It makes you nervous. You never know how you’re going to be impacted by your environment. You’re thankful for every day you get.”

ISU paused last week after a player tested positive. NCAA guidelines suggest, but don’t require, a 14-day quarantine for Tier 1 individuals, meaning players, coaches, managers and athletic trainers. Had that 14-day quarantine been applied team-wide? ISU would not have been able to play their season opener next Wednesday against East Carolina at the Gulf Coast Showcase in Estero, Fla.

ISU interpreted the NCAA guideline as having to quarantine the player and their roommate and allowed contact tracing to dictate whether anyone else had to sit out.

Once that process was completed late last week and it was determined that no one else on the roster had tested positive, the process to return to action was put into motion.

“I’ll say this. Dr. [Andy] McDonald [who is working with ISU athletics] and Kellen [Norris, ISU Director of Sports Medicine And Performance] with what they do? Their job is impossible right now. I wouldn’t their job, but they’re working tirelessly to make sure we have the possibility of playing basketball games. I really appreciate it,” Lansing said.

ISU will continue practice through the remainder of the week. The team intends to depart for Florida on Monday.

All home men’s and women’s basketball games will air on The Valley On ESPN via ESPN3 or ESPN Plus or regional networks such as Fox Sports Indiana and Fox Sports Midwest among others. Television designations will be assigned by the Missouri Valley Conference at a later date.

Digital Media Coordinator Luke Martin will handle the play-by-play call while ISU Hall of Famer Matt Renn will serve as an analyst from the Hulman Center press box for Sycamore men’s basketball. Women’s basketball play-by-play duties will be handled by Senior Assistant Athletic Director John Sherman while select student broadcasters will serve as analysts throughout the season.

For both broadcasts, the television call will be simulcast to WIBQ 97.9 FM as well as streamed (audio) live on GoSycamores.com free-of-charge.

Due to a number of factors associated with the NCAA Resocialization Guidelines, ISU will not produce road radio calls for the 2020-21 seasons for men’s or women’s basketball. All MVC contests will air on The Valley On ESPN and details to access the live video feeds will be available on GoSycamores.com.

Sycamore women’s basketball is scheduled to open their season against Big 10 foe Illinois on Nov. 25 in Champaign. Broadcast information will be available on GoSycamores.com.

The Indiana State men are set to begin the 2020-21 season on Nov. 25 at the Gulf Coast Showcase. The Sycamores will take on East Carolina in the opening round of the tournament at 8 p.m. Fans can watch the game via FloSports.