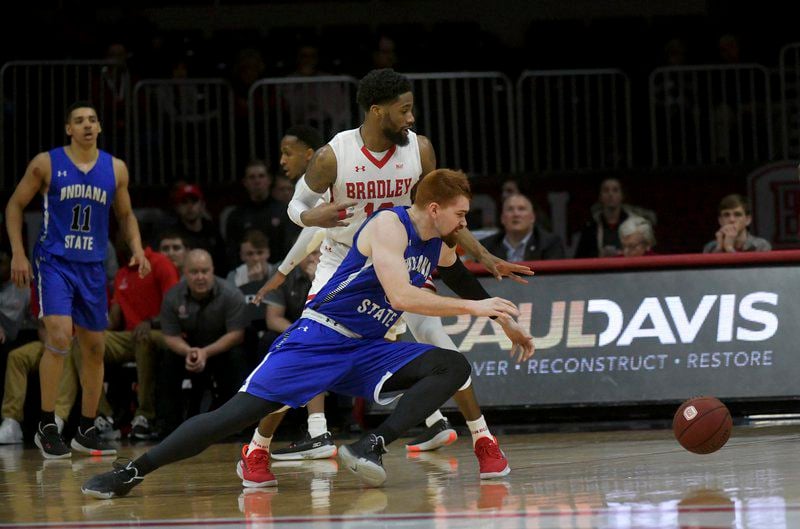 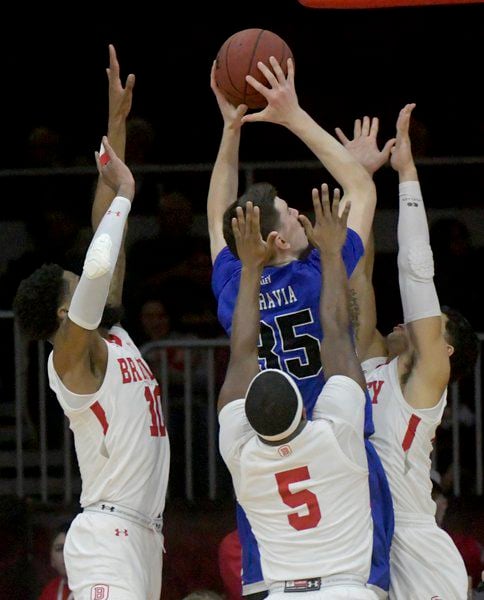 Indiana State’s men’s basketball team hasn’t had too many injuries during the season, but they were not so lucky on Wednesday.

Senior point guard Jordan Barnes suffered a gruesome left index finger with 12 minutes, 59 seconds left in the second half. At the time, the Sycamores were trailing by eight.

ISU could have chosen to fold or get inspired. They chose the latter.

The Sycamores immediately played with more verve and energy and fought back to tie the game.

The inspiration was welcome, but in the end, the Sycamores couldn’t provide a finishing kick. ISU’s offense dried up, and eventually, so did their stopping power as Bradley edged away from the Sycamores to earn a 72-61 win at Carver Arena.

“They’re a good defensive team and we had trouble executing in the last six minutes. We were trying to get fouled too much instead of trying to make regular basketball plays,” Barnes said.

“We played hard enough to win, but we didn’t play well enough to win. It was tied at 51 and they out-scored us 21-10. That’s just a really good, disciplined, organized, experienced team that was picked at the top of the league for a reason,” ISU coach Greg Lansing said.

Bradley started the game red-hot from the field. Though ISU was not playing poor defense, the Braves still began the game by making seven of its first 10 shots. Bradley led 16-7 at the end of that spurt.

The Sycamores kept their wits. Bradley cooled off and ISU was able to pull within range. By the 6:22 mark, Bradley’s lead had been sliced to two. ISU had three chances to tie the game or take the lead, but couldn’t do so.

The teams shadowed one another for the rest of the half. Bradley held sway with a 33-29 lead at the break, still riding the hot shooting it had early in the game. The Braves converted half of their first-half shots.

“We didn’t really have an answer for Childs tonight,” said Lansing, as Childs scored nine points in each half.

Bradley started hot in the second half too. The Braves scored on five of their first six possessions and quickly pushed their lead to nine.

The lead would peak at 10 just before Barnes got hurt. On a traditional three-point play, Barnes hurt his finger when he crashed at the basket stanchion. He screamed in pain and it appeared the injury was serious.

“I dislocated it. When I landed, I think I hit it on the [stanchion] and it bent it back. They were able to pop it back in. It feels better, it’s just a little swollen,” Barnes explained.

The Sycamores immediately went to work. Five different Sycamores scored in ISU’s 12-4 run after Barnes’ injury. The Sycamores fought back to tie the game at 51 on a Christian Williams 3-point shot.

“Whenever someone goes out, you have to get fired up even more. He’s sacrificing his body for us, so we just had to play hard,” Tre Williams said.

Barnes would return to action with two of his fingers taped up, but ISU’s offense dried up after the game-tying spurt. The Sycamores went 9 minutes, 2 seconds without a field goal.

“We were giving up too many easy shots and then fouling. We need to cut down on that,” Tre Williams said.

ISU plays its next two games at home. Missouri State visits Hulman Center at 4 p.m. on Sunday. The Bears annihilated Drake 97-62 on Wednesday. Clearly, ISU’s defense will have to be on-point.

“Defensively? We have to be a little bit more determined. If you’re going to stay in the top half of the league, these are the games you’re going to experience. Whether you’re making shots or not, you have to guard. Our defense let down in the last six minutes,” Lansing said.

Sorry, there are no recent results for popular images.