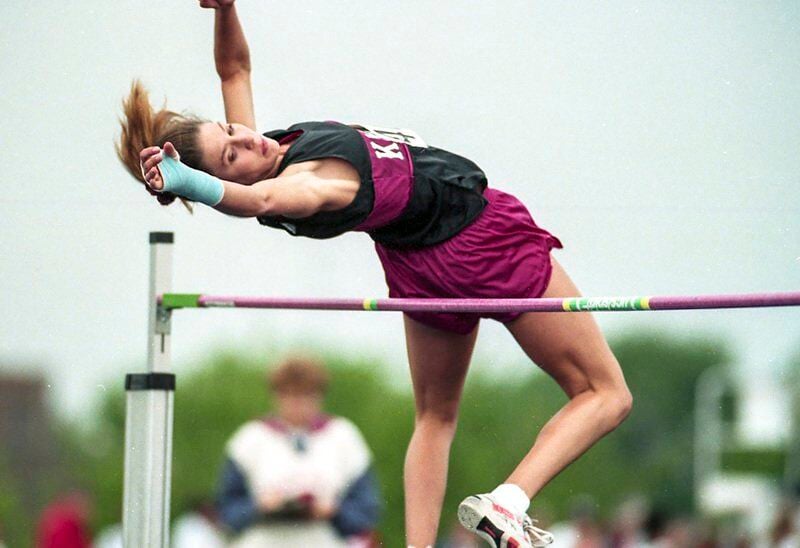 Up and over: Northview’s Carri Long competes in the 1995 girls track sectionals at Terre Haute North. Long won and went on to win her second straight state title.

Still on top: Carri Long’s 5-foot-10 record in girls high jump still stands as the gold standard for Northview High School 25 years after she set it. 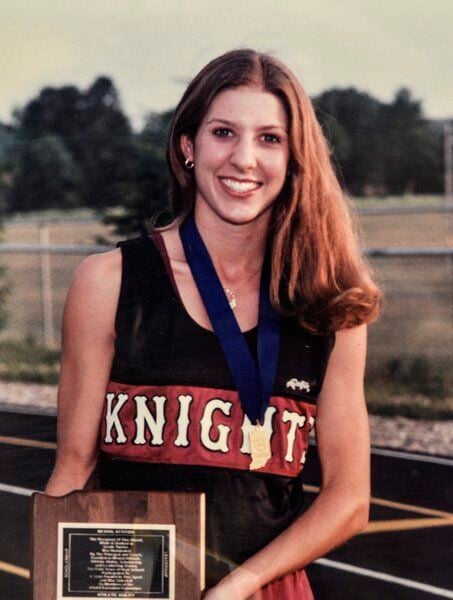 Back to back: Carri Long brought state titles back to Northview in 1994 and 1995 for the girls high jump.

Up and over: Northview’s Carri Long competes in the 1995 girls track sectionals at Terre Haute North. Long won and went on to win her second straight state title.

Still on top: Carri Long’s 5-foot-10 record in girls high jump still stands as the gold standard for Northview High School 25 years after she set it.

Back to back: Carri Long brought state titles back to Northview in 1994 and 1995 for the girls high jump.

Northview High School's Most Memorable Female Athlete is still competing in two of her sports, although not in her specialty.

Carri Long does have a professional-grade high jump pit in her yard, however.

Long was the state champion in that event in both 1994 and 1995 for the Knights, after reaching the state finals in the two previous years as well (state runner-up in 1993). She also competed in basketball for four years, volleyball for two years and, when she wasn't in school, also was a regular on the High School Rodeo Association circuit.

She was the national high school rodeo queen during her senior year, in fact, and while she was at Purdue was nominated by her coach and became a member of the All-America Farm Team, a collection of athletes who grew up working on their family's farm.

All, she indicated this week, because of some serendipitous occurences and perhaps even some divine intervention.

When she was a girl, Long — who is now Carri Dekkers — would ride along on her pony when her mother practiced show jumping.

"My pony couldn't clear the jumps," Long said, "so I would get off and jump over them myself."

That experience led Long to believe she'd be a hurdler some day, but . . .

"We had track for the first time in seventh grade and I got in the hurdles line," she recalled. "But the line was really long, and all the cute boys were high jumping. I went over and cleared the first height" and the rest is history.

One of Long's first high school meets was against Terre Haute North, and she won high jump — beating former state champion Karen Byrd of the Patriots in the process — on her way to being unbeaten in dual meets for four years in that event.

Stuckey's track experience had been in distance running, so he spent a lot of time looking up things that would help his prize pupil.

"She didn't have to have a whole lot of coaching," he said, "but she was a great learner and an excellent listener."

The 6-foot Long began playing basketball for the Knights as a freshman, and when she was a sophomore Jim Buell became her coach in that sport. Joni Buell, Jim's daughter and Carri's best friend, hadn't been a basketball player at that point.

"I told her, 'You've got to play basketball,' " Long said, "so she told me, 'I'll play basketball if you play volleyball,' " which is how Long added that sport for her final two years at Northview.

But although Long had other track events, she made a name for herself in high jump — and was not alone. Jennifer Blackburn was jumping for Terre Haute South at that time, and the two of them consistently threatened the 6-foot mark when they competed against each other, making their event a must-see part of girls track and field.

Long never cleared 6-0 in high school, though — which is where she says divine intervention played a part.

"I wanted to go to Arizona [to jump for a particular coach], and they told me they'd give me a scholarship if I jumped 6-0 in high school," she recalled. She never got that mark, she didn't go to Arizona — and a few years later the coach she wanted to have was accused of being a sexual predator by some of his female athletes.

Long went to Purdue instead, where she was a Big Ten champion both indoors and outdoors, part of two conference championship teams and was an NCAA runner-up. After graduating, she helped coach the Boilermakers while still competing post-collegiately, and had her career-best jump of 6-2 1/2 at the World University Games in Beijing.

While coaching the Boilermakers, she helped to recruit a high jumper named Carrie Long, which led to an awkward moment a few years later. Set up on a blind date, she noticed the gentleman had a surprised look when they met. "Did you Google me?" she asked, and her date admitted he had. The Carrie Long, high jumper from Purdue, is blond, which Carri Long is not.

Less than two years later, however, she and Deon Dekkers were married. They live near Canton, Texas, which she describes as being, "a lot like Brazil. They're even known for their band." Deon is a native of South Africa whose older sister, Michelle Dekkers, was a standout — and barefoot — cross country runner at Indiana University, and he and Carri have two sons (Deon, 10, known as D3, and Colton, 6).

Another Northview athlete considered for the Most Memorable honor was Stacy Payton, a four-year starter in both basketball and softball who is still playing softball for Ball State and probably headed for All-America status.

But, as mentioned, Long is still competing herself. She returned a call to the Tribune-Star this week after playing basketball with her husband and older son, and she is still a barrel racer.

The high jump pit? That's for the boys, their cousins and some neighbors. "Trying to pay it forward," Long said.