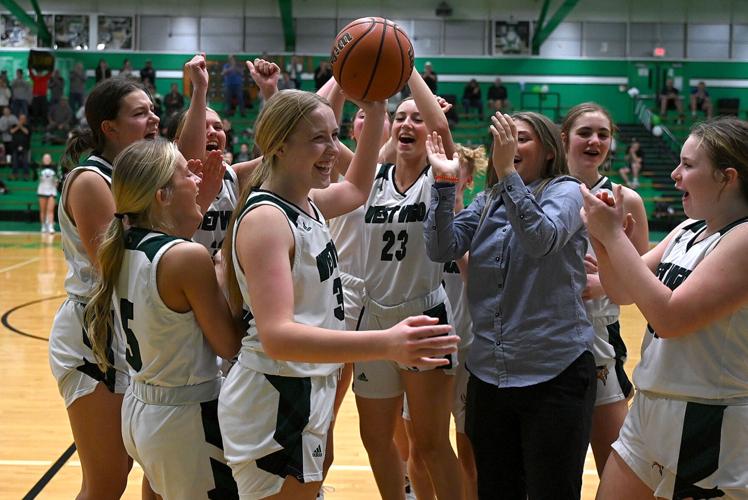 West Vigo’s Katelyn Fennell (33) holds up a ball that was presented to her after she scored her 1,000th point during the Vikings’ win over Riverton Parke on Tuesday inside the Jim Mann Green Dome. 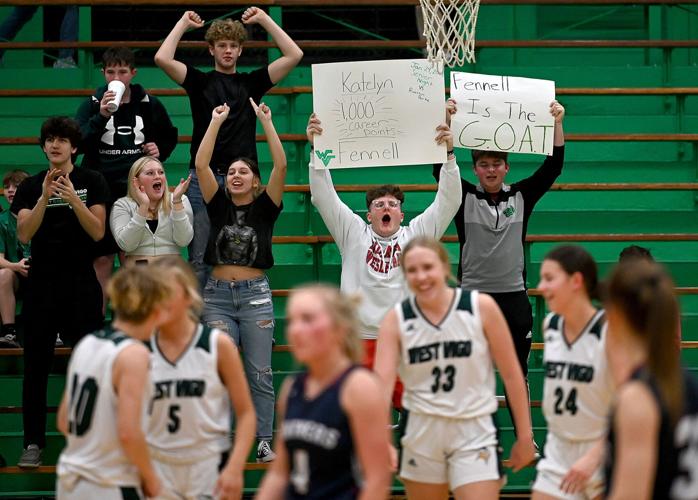 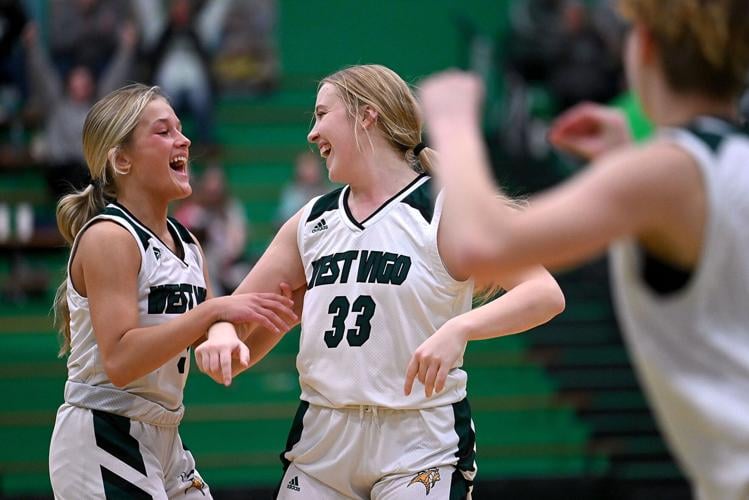 West Vigo's Katelyn Fennell (center) celebrates with her teammate, including Kenzye Knopp (left), after she scored her 1,000th point during the Vikings' win over Riverton Parke on Tuesday inside the Jim Mann Green Dome. 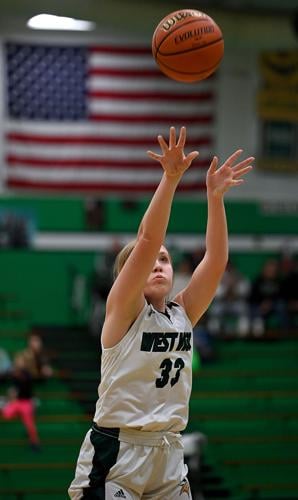 West Vigo's Katelyn Fennell hits her second of two free throws to reach 1,000 points during the Vikings' 53-41 win over Riverton Parke on Tuesday inside the Jim Mann Green Dome.

West Vigo’s Katelyn Fennell (33) holds up a ball that was presented to her after she scored her 1,000th point during the Vikings’ win over Riverton Parke on Tuesday inside the Jim Mann Green Dome.

West Vigo's Katelyn Fennell (center) celebrates with her teammate, including Kenzye Knopp (left), after she scored her 1,000th point during the Vikings' win over Riverton Parke on Tuesday inside the Jim Mann Green Dome.

Going into the fourth quarter of girls high school basketball Tuesday night in the Jim Mann Green Dome, Katelyn Fennell needed some points for a career milestone and her West Vigo team needed some points to overcome pesky Riverton Parke.

The two goals went hand in hand. The Vikings scored 16 straight points, with Fennell getting half of them, and went on to a 53-41 win as Fennell wound up the evening with 1,005 points.

The Panthers had fallen behind by 10 points early in the third quarter, but closed out that period on a 13-2 run to take a 35-34 lead into the final eight minutes. Fennell, meanwhile, had entered the game with 983 points but had been held to two free throws in that third quarter and needed six points to become the third Viking (behind Lauren Dailey and Bridget Miller, who also had more than 1,000 rebounds) to reach 1,000 points for her career.

Freshman Delaney Marrs opened the fourth quarter with a 3-pointer that put West Vigo ahead to stay, and Fennell got the next six, reaching 1,000 with the second of two free throws with 5:56 left in the game.

The frenzied cheers as Fennell scored those last six points were a clue, but the Viking senior said afterward that she was already aware of the point situation.

“I found out before the game,” she said. “I wasn’t supposed to know [how many were needed].”

Although she refused to reveal her source of the coveted information, Fennell had known that the milestone was a possibility. “I started realizing it was possible in this game,” she said. “And Riverton Parke’s coach [Jared Garman] is my uncle, so that was a lot of fun.”

“I’ll hear about it [at family gatherings] forever,” Garman joked after the game. “She’s a great ballplayer. We knew she was gonna get hers.”

Viking coach Jonathan Kirchoff considers Fennell the most valuable player on any team in the area, but for stretches on Tuesday the Vikings didn’t seem to need her. West Vigo hit 7 of 10 first-quarter shots — two of them by fellow senior Avery Lasecki, who will not reach 1,000 points and who, according to Kirchoff, offered to loan her points to Fennell if they were needed — and had a 16-8 lead.

“We finally started executing at the end of the year,” Kirchoff quipped after the game.

The scrappy Panthers got within 22-20 when Macey Barnes opened the third quarter with a basket, but the Vikings went on a 10-2 run for a 32-22 lead. Lily Ramirez had two baskets and Marrs one in that streak, with Fennell and Kenzye Knopp getting two free throws each.

Riverton Parke’s Bailey Duke, working on some milestones of her own, then had a basket; a steal that set up a basket by Haylee Mathas; a steal and basket of her own; and another assist on a Mathas 3-pointer. Now the visitors were within 32-31, and they took their 35-34 lead on a driving layup by Mathas with 31 seconds left in the quarter.

After shooting over 50% in the third quarter, however, the Panthers went 1 for 10 in the fourth period as the Vikings pulled away.

“That’s our game at the end of the third quarter: pressure [defensively] on top, move the ball,” Garman said. “This was just our second loss in seven games. But we had some mental lapses on defense, and when [Fennell] got hot, she got hot.”

Fennell had a game-high 22 points and Marrs scored 12 for West Vigo. Mathas had 11 before fouling out for the Panthers, and Duke had 12 points, 17 rebounds, four assists and four steals. The relentless Duke can reach 1,000 rebounds — on Thursday, if she can repeat Tuesday’s performance — and has over 900 points herself.

Both girls are going to reach their goals — “It’s very rewarding,” Fennell said about reaching hers — despite missing a lot of games two seasons ago because of COVID-19.

“[Fennell] gets more shots up than any player I’ve had,” Kirchoff said. “You cannot replace a player like Katelyn Fennell. I really can’t say enough good things about her.”

Next — Both teams close out their regular seasons with home games Thursday, West Vigo (8-14) against North Vermillion and Riverton Parke (9-10) against Fountain Central.