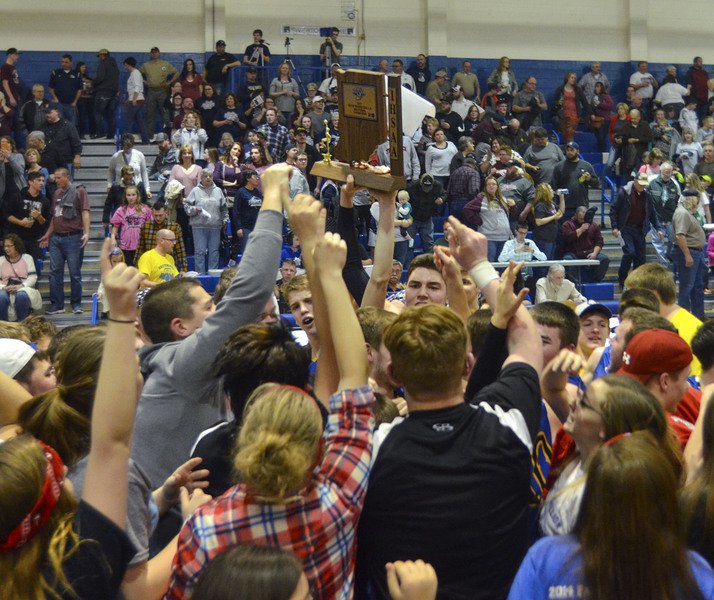 Hometown heroes: North Vermillion fans celebrates their sectional championship with their student section in their home gym after the Falcons beat Riverton Parke 61-56 in 2017. 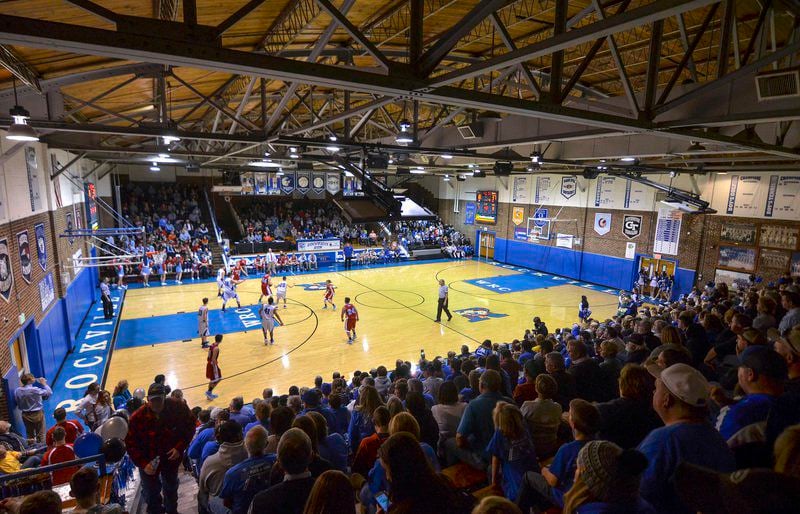 Still rocking: The Rock-A-Dome was filled to capacity during the final winter homecoming before Rockville and Turkey Run consolidated to form Parke Heritage in 2019. 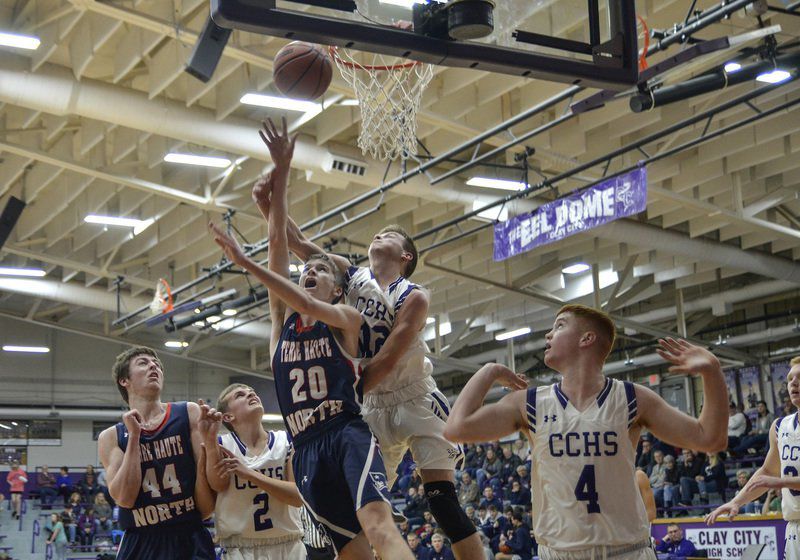 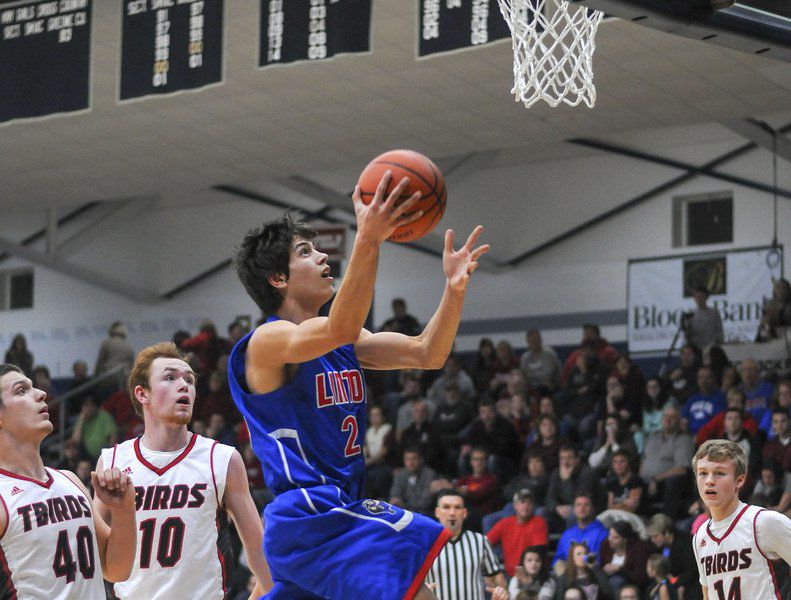 Annual event: Linton's Josh Dieball blows by a double team from the Eastern Greene defense during the championship game of the 2017 Greene County Invitational, which is played at White River Valley in Switz City.

Hometown heroes: North Vermillion fans celebrates their sectional championship with their student section in their home gym after the Falcons beat Riverton Parke 61-56 in 2017.

Still rocking: The Rock-A-Dome was filled to capacity during the final winter homecoming before Rockville and Turkey Run consolidated to form Parke Heritage in 2019.

Annual event: Linton's Josh Dieball blows by a double team from the Eastern Greene defense during the championship game of the 2017 Greene County Invitational, which is played at White River Valley in Switz City.

This Daily Top 5 is going to violate one of the guidelines I mentioned a couple of lists ago.

In listing favorite venues for tennis and baseball, I stayed away from the Wabash Valley. For high school basketball, that’s harder to do.

Yes, I’m treated like a king everywhere I go around here, so the people involved aren’t the biggest factor. But gyms have personalities all their own — and, while I don’t eat nearly as much or as often as I used to, some of them have hospitality rooms.

Another reason to focus this list locally: not that much competition from out of town.

Yes, Bankers Life Fieldhouse is OK, and Market Square Arena was too. Pep bands were fun at Lawrence North and the former Indianapolis Broad Ripple, and Evansville Reitz has a nice, quirky gym whose charms are nullified in part by the longest stairways in Indiana.

But here’s the Daily Top 5.

5. Casey — Loved this gym from the moment I stepped into it. I’m guessing there’s probably a central heating system in it by now, but the fact that there were steam registers when I got there let me know this grand old lady had been there awhile.

Loved the pressbox, and the players having to climb a ladder to check in with the scorekeeper. Love the unorthodox shape.

And, someday when you’re not busy, I’ll tell you the story of the “old” Casey gym.

4. Clay City — My first year with the Terre Haute Star I covered a couple games involving Ron Timberman’s up-and-coming Eels, led by senior center John Heaton. At the end of that regular season, I was fortunate enough to cover the Clay City Sectional.

One of the closest, tensest games I’ve ever seen was there between Sullivan, led by Jay James, and Clay City. Don’t remember either team ever having a big lead, and down the stretch the decisive factor was a player who came off the Eels’ bench. In a harbinger of many things to come, that player was — you’ve probably already guessed — freshman Bob Heaton.

I had four roommates at the time, and remember telling them when I got home, “This was the closest game I’ve ever seen, and the freshman was calling for the ball!”

Like I said, the Eels were on their way for the next five years or so. Did I see a lot of their games? Did Howard Sharpe once accuse me of writing for the Clay City Star?

3. Rockville/Parke Heritage — Any gym nestled within an elementary school is on its way to extreme quirkiness, and the Rock-A-Dome checks all the boxes. The fact that it’s the closest thing to the Lowell gym I grew up with (no room on the sideline, even less room on the endlines) is another plus.

There’s really not a pressbox, which would count against some gyms, but here that’s part of the charm (because somebody will find me a table or a niche somewhere). The fact that it’s small means that it’s really LOUD.

2. North Vermillion — For as long as I can remember, the Falcons have hosted as many tournaments as possible.

This was a good thing from a girls basketball standpoint — Ronda Farley and Kristy (spelling help needed) Pearman are still one of my all-time favorite backcourts — and, I’m told, from a hospitality room standpoint. Some of the best press seating anywhere.

And nobody else has a Falcon dog.

1. Switz City/White River Valley — I generally love the Greene County Invitational for its rivalries and its competitiveness. I loved the fact that the L&M Braves moved a lot of home games there in the mid-1980s. I loved the last of the real Cinderella teams in Indiana, the 1993 Wolverines. I love my usual seat, one of the tables at midcourt, a step or two from the sideline and opposite the scorer’s bench.

But here’s what happened at my first Greene County Tourney, which was its name in the 1970s. I got there early and someone suggested I head to the home economics room.

I have been to Amish buffets with less food. Main courses, salads, desserts . . . and, the piece de resistance, a freezer full of ice cream.

Yes, my favorite ever since.