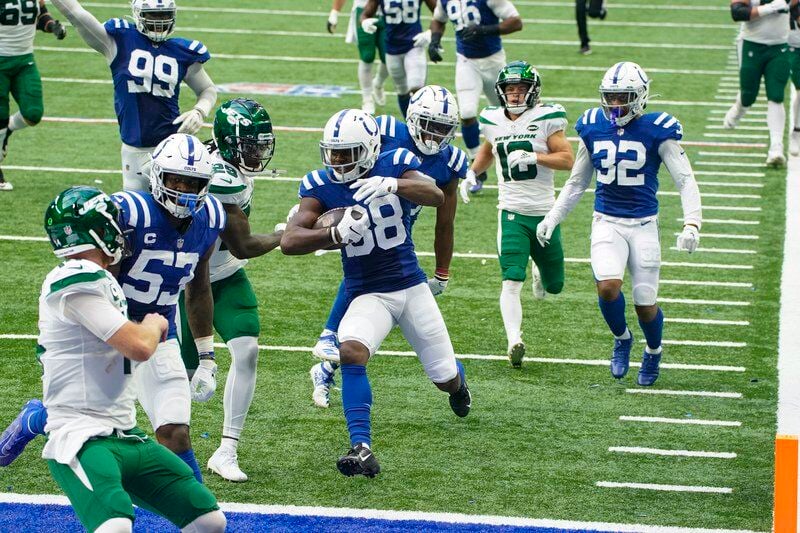 Indianapolis Colts cornerback T.J. Carrie (38) runs in for a touchdown after an interception against the New York Jets in the second half of an NFL football game in Indianapolis, Sunday, Sept. 27, 2020. (AP Photo/AJ Mast) 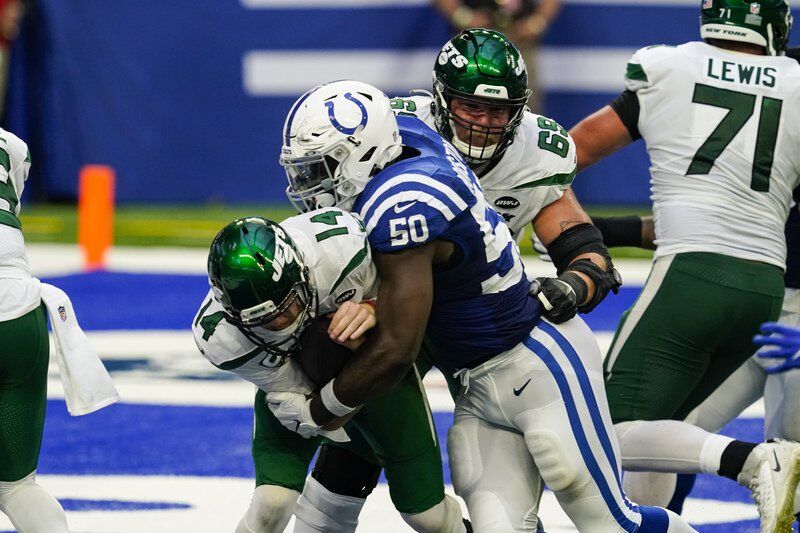 Indianapolis Colts cornerback T.J. Carrie (38) runs in for a touchdown after an interception against the New York Jets in the second half of an NFL football game in Indianapolis, Sunday, Sept. 27, 2020. (AP Photo/AJ Mast)

By the time Justin Houston sacked Sam Darnold in the fourth quarter for a safety, it honestly felt gratuitous.

On a gorgeous Sunday evening, the Indianapolis Colts made a little history against the New York Jets. Philip Rivers added a pair of notable career milestones, the defense returned a pair of interceptions for touchdowns in the same game for the first time in 50 years and the Colts roared to a 36-7 victory at Lucas Oil Stadium.

Houston’s safety also gave Indianapolis back-to-back games with that rare scoring play for the first time since Weeks 10 and 11 in 1960, and the defense put more than twice as many points on the scoreboard (16) than the opposition.

“Defensively, it was quite an effort. It was quite an effort,” Colts head coach Frank Reich said. “It was a unique game, right? To get the Pick 6, offense we didn’t even really get on the field till the end of the first quarter. So just a unique game in that regard. But defense coming up big, scoring 16 points, back-to-back safeties in two games, that’s quite an accomplishment. Just guys making plays all over the field.”

Rivers was ruthlessly efficient in his third start for the Colts (2-1), finishing 17-of-21 for 217 yards without being sacked or intercepted. He joined the 400-touchdown club on a 1-yard pass to tight end Mo Alie-Cox with 14:13 remaining in the first half, and he surpassed 60,000 career passing yards later in the game.

In both cases, the potential Hall of Famer became the sixth NFL quarterback ever to reach those marks. New Orleans Saints quarterback Drew Brees – the man Rivers replaced as the San Diego Chargers’ starter in 2006 — leads in both categories with 77,888 yards and 550 touchdowns.

“I could sit here and tell you they don’t matter, and I don’t care about it. They are meaningful,” Rivers said. “I’ve dreamed of playing quarterback in this league since I was a little kid. There’s still some guys that are far, far away on that list in both yardage and touchdowns. But some of those guys are guys I grew up loving, was fans of, posters on the wall.

“Some of them I’ve been able to compete against. So it certainly is special. I think it’s more than anything a longevity kind of deal and being consistent, for the most part, over a long period of time.”

That was a nice note, but the story of this game was the Indianapolis defense.

Xavier Rhodes set the tone on the opening series with a 44-yard interception return for a touchdown. T.J. Carrie book-ended it with a 47-yard Pick 6 for the Colts’ final touchdown as time expired in the third quarter.

That marked the first time the franchise has returned two interceptions for touchdowns in the same game since Oct. 18, 1970, also against the Jets.

It also was the first touchdown of Carrie’s seven-year career.

“It was good, man,” he said. “It was really a dialed-up play by (defensive coordinator Matt Eberflus), a play that we’ve kind of worked on all through camp that really came to life. Definitely a disguise play that we felt like would give the quarterback a different post- and pre-snap read. Forced the pressure, defensive line came in and did their job and forced him to make an unadvised decision.

“And the great ones always told me, ‘Catch the ones that come to you, and you’ll lead the league.’ So, after that, it was just my job to catch it and return it.”

Darnold looked rattled throughout the contest.

He kept several plays alive early with his legs and even briefly tied the game on a 16-yard touchdown pass to Braxton Berrios with 5:12 remaining in the first quarter.

But Rhodes victimized him for a second time in the end zone after Indianapolis again pulled away with 10 unanswered points in the second period. On first-and-goal at the 7-yard line, Darnold appeared to have wide receiver Lawrence Cager open in the back of the end zone.

As the quarterback let go of the football, however, Rhodes read his eyes. He sprinted back into position and made a leaping pick to end the Jets’ last real scoring threat.

Darnold finished 17-of-29 for 168 yards with one touchdown and three interceptions, and New York (0-3) never advanced beyond its own 44-yard line on its final seven possessions.

The Colts have a well-publicized goal of 40 takeaways this season. After being shutout in the opener at Jacksonville, they’ve recorded six interceptions in the past two weeks.

“We’re still working at it,” Rhodes said. “We’re just gonna continue to work at it each and every day, like we do in practice. And we’re gonna see how it is at the end of the season.”

Faced with so much defensive support, the offense didn’t need to take big chances.

Rivers’ touchdown pass and a 42-yard field goal by Rodrigo Blankenship gave Indianapolis a 17-7 haltime lead. It could have been bigger, but Blankenship hit the upright on a 41-yard attempt as time expired.

The Colts essentially put the game away on rookie Jonathan Taylor’s 1-yard touchdown run with 5:21 remaining in the third quarter, and Carrie’s Pick 6 made it 31-7.

Houston added the safety with 4:50 remaining in the fourth quarter, and Blankenship capped the scoring with a 41-yard field goal with 2:04 left.

Indianapolis travels to Chicago next week to face a Bears team that improved to 3-0 Sunday with a come-from-behind win at Atlanta.

The Colts will arrive in the Windy City with a defense riding a hot streak.

“I think we have an excellent defense,” Reich said. “I’ve felt this way from the start. In training camp, they looked good. But this is the NFL. Every week, there’s good teams we’re playing. … All that matters is that we score one more point than the other team.

“I’d like them to keep this up. The standards are high, and the expectations are high. But it’s play good football, play winning football, whatever that takes.”

TERRE HAUTE - William Carpenter Jr., 77, of West Terre Haute, passed away October 19, 2021 in his residence. He was born May 5, 1944 in Terre Haute to William Carpenter Sr., and Ella Grayless Carpenter. He worked in maintenance most of his life and was a race enthusiast, enjoying Indy and NA…