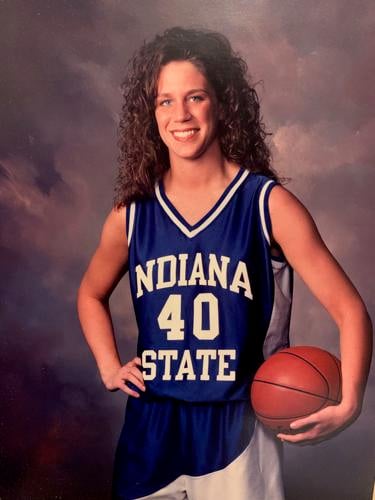 Livia Hester, who had graduated from Terre Haute North High School, holds a basketball while she was a member of the Indiana State women’s team in the 1990s. 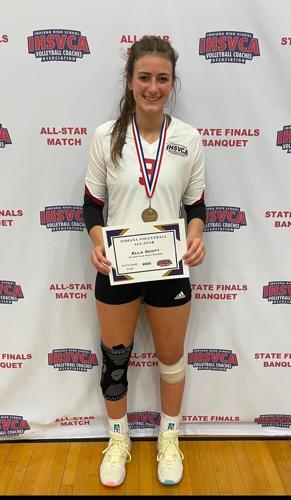 Livia Hester toiled a lot of hours in the Indiana State Arena during her basketball career with the Sycamores in the early 1990s.

She admits today that she hadn’t been back to her old stomping grounds for a long time — until the Sycamores began recruiting her daughter, Ella Scott, to play for their volleyball team.

“ISU was a special time and a special place for me,” said Hester, now Livia Scott. “When we were on her visit and we walked back into that gym, it, it had been a while,” she recalls. “I did a lot of running in that gym and conditioning . . . those are the things that popped up.”

Livia will be returning to the ISU Arena frequently over the next four years, as Ella signed her national letter-of-intent to play for the Sycamores earlier this month.

“I haven’t thought about it in a number of years, but this was completely her decision, her process,” she said. “Recruiting’s a long process, especially when you have COVID[-19] mixed into all that. But for her to go back, it’s pretty special.

“I’m just really excited for her and to get to watch her grow over the next four years.”

Ella admits that choosing the alma mater of both of her parents (her father, John, was a cheerleader at ISU) was nothing more than good fortune.

“During my recruiting, I was looking for somewhere where I could go to spend the next four years of my life,” she said. “I didn’t want to one school and then transfer. I want to stay someplace for four years and have it be my home. It just so happened to be a coincidence that both of my parents went there.”

Livia now works as an associate registrar at Marian University, working with graduate students and certifying athletes with the NAIA.

She got to know Marian’s volleyball coach, Ashlee Pritchard, through her time there. Pritchard’s time at Marian included leading the Knights to a national championship.

When Indiana State had a coaching change last winter, the Sycamores hired Pritchard to help the program try to reach Marian’s status at the NAIA level.

“She was great through the recruiting process, and that’s a big part of what sold us on it,” Livia said. “What she did at Marian was huge. We’re excited for her to do the same thing at Indiana State.”

“Coach Pritchard has always been amazing throughout the recruiting process,” she said. “She would always text me, see how the season’s going. She’s just really a great coach and she’s always there for you. She seems like very interactive with her players, and she truly wants the best for you.”

Pritchard would no more take the daughter of someone she crossed paths with at her former job than Ella was to choose a school only because her parents went there.

She is excited to add Scott to her lineup.

“Ella is someone you will want to keep an eye on,” Pritchard said. “She is a huge block and has a heavy arm. Combine that with a team mentality and she will be fun to watch.”

Ella stands 6-foot-1 and is a middle blocker. Her only sibling, Ian, is a sophomore basketball player at Grace College in northern Indiana — standing 6-foot-7.

Grace is currently undefeated and ranked No. 3 nationally in the NAIA. Ian ranks fourth on the team in scoring at 14.6 points per game, and also grabs 6.2 rebounds per game.

John Scott doesn’t possess the athletic resume of the rest of his family, but his genetic contribution — along with a tall and athletic wife — obviously helped produce such athletic and talented children.

The seasons overlap for Ian and Ella, but the Scotts make it work like every set of parents with multiple athletes.

“We kind of have to split seasons and try and always make sure that one of us are at the games,” she said.

Livia’s ISU career is far enough out of her mind that she didn’t even realize she averaged double figures in scoring all four years of her career from 1992-96. She still ranks as the 12th-leading scorer and ninth-leading rebounder in school history.

Her fondest memories do not necessarily include a pair of 30-point scoring games in her senior year or anything else that might still be in the record books.

“For me it was really about the relationships that I developed while I was there,” she said. “I stay in touch with a lot of my teammates to this day.”

One of them was in the news recently, as the former Amber Guinn (now DeCoursey) retired after a wildly successful volleyball coaching career at Barr-Reeve.

“We have kids of similar ages, so I run into her at volleyball tournaments,” Livia noted. “Chrissy Holden Fair lives around the corner from me. It’s really about things that. Looking back on it, it’s such a short period of your life that you get that opportunity to compete. It was a great opportunity for me.”

While Ella will play about an hour west of her hometown, Livia likes the fact that she was able to play in her hometown.

“I loved playing in Terre Haute,” she said. “I didn’t go away to school and that was the right place for me to be.”

Ella’s specialty is as a middle blocker and she seems to enjoy taking the hardest hits from her opponent to her body.

“You don’t get smacked in the face a lot while blocking, but you definitely get hit in the chest a few times,” she said. “I love it.”

Ella is wrapping up her final season of club volleyball for the prestigious Circle City program in Indianapolis, and will report to ISU sometime next summer.

Ella isn’t sure of her major, but is leaning toward business/marketing.

She is thankful to have a mother and brother to rely on to find out what to expect at the college level.

“It’s really about hard work and time management,” she said. “You’re a student-athlete, so you have to put in the work to be an athlete but also as a student to maintain good grades. It’s just hard work all the way around.”

Joey Bennett can be reached by email at jbblkc@gmail.com.

Joey Bennett can be reached by email at jbblkc@gmail.com.