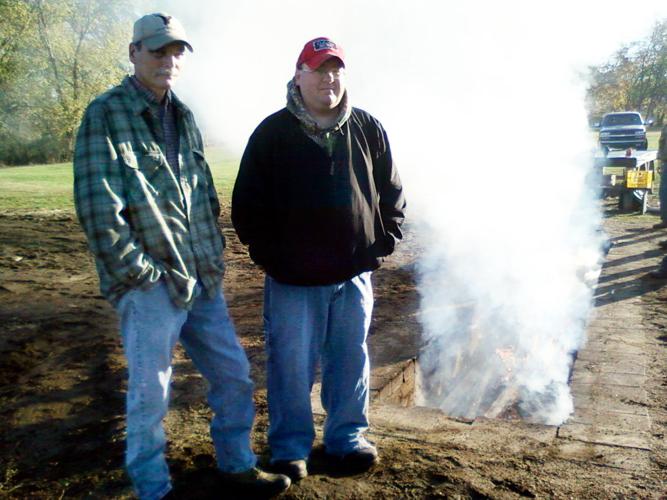 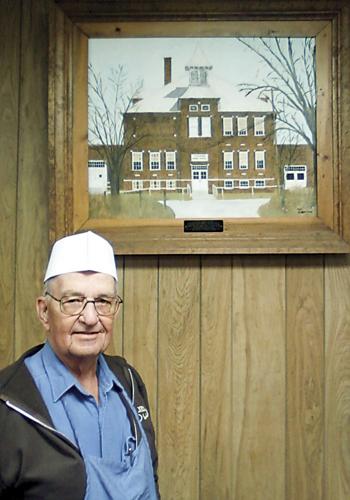 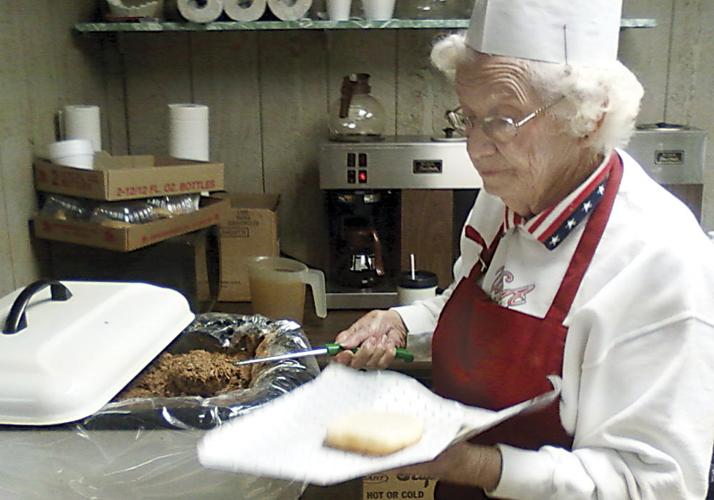 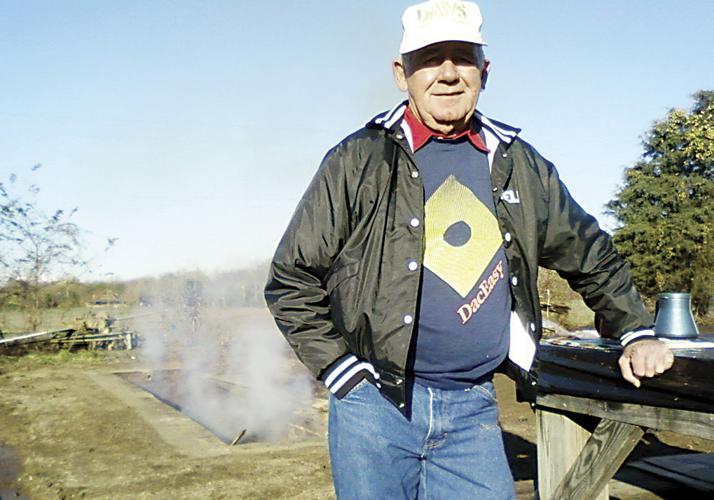 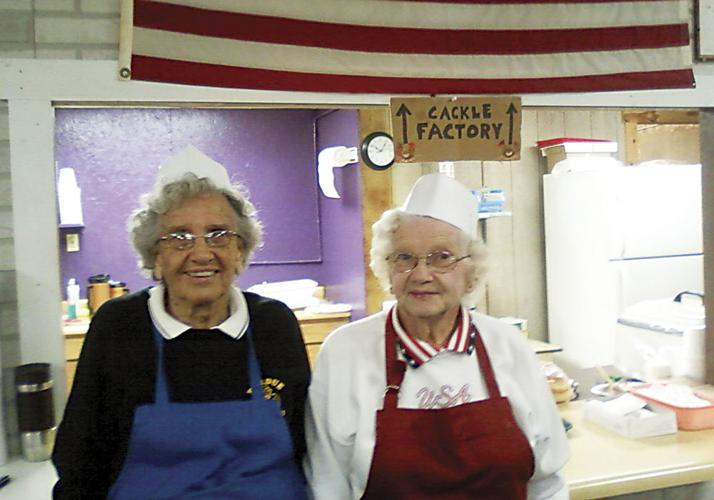 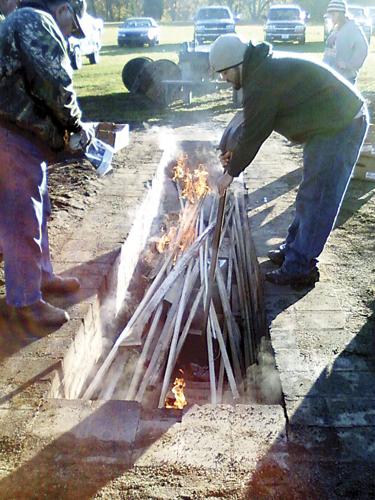 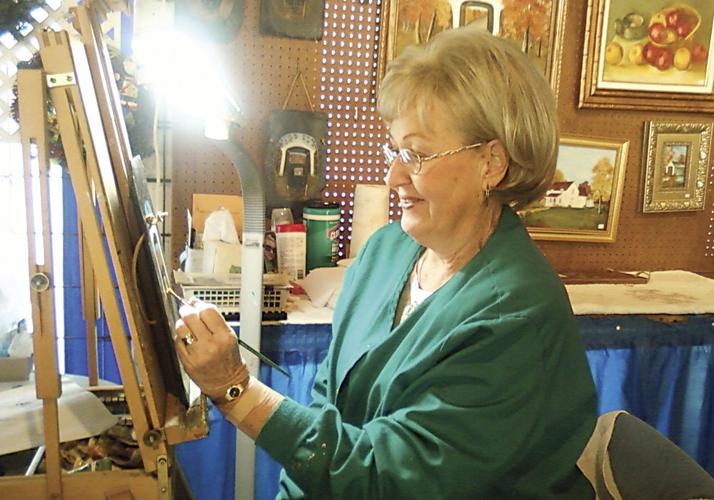 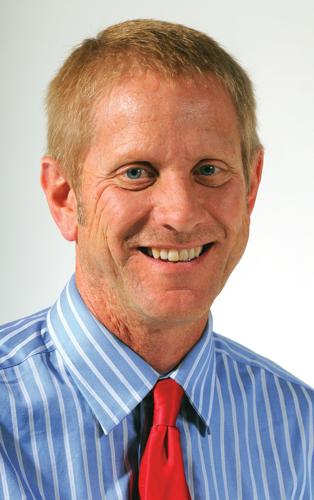 Traditions stay alive only as long as the people who hold them dear.

Minutes after sunrise Friday morning, a dozen people grabbed long planks of wood and tossed them into a brick-lined pit, 30 feet long, 4 feet deep and 4 feet wide. The ground behind the Tangier Community Center was still mushy from four days of cold, hard October rains. On this day, though, the sun shone brightly and the fire burned hot.

Most of the volunteers tending the blaze were also there on Tuesday and Wednesday, trying to keep the fire burning in 40-degree temperatures, 40-mph winds and soaking thundershowers.

Standing in the tempest, another volunteer turned to Caswell “Caz” Miller, the Tangier Community Club president, and jokingly said, “Tell me again why we’re doing this.”

Two mornings later, Miller was laughing about it all.

When asked that same question — “Why?” — on Friday, Miller answered matter-of-factly, “We’ve got to get the meat out.”

He was referring to “buried beef.” A half-ton of it. Four times during every Parke County Covered Bridge Festival, the townspeople of Tangier cook nearly 1,000 pounds of succulent buried beef. They spend an entire day burning wood into coals, turning the pit into “a great big crock pot,” as longtime volunteer Kelly Little put it. That evening, they cover the glowing coals with a layer of sand and burlap before carefully loading the beef, wrapped in football-size foil packages, one by one into the pit. They seal the pit’s top with metal covers and more sand. It simmers overnight, and the crew reverses the covering process to uncover the meat.

It gives the festival-goers a reason to stop in Tangier while touring Parke County’s 31 historic covered bridges. Sales of the buried beef sandwiches and other goodies cooked up by the townspeople provide the sole means to keeping the heat and lights on in the community center.

“Because we vote here,” Little said of the center’s purpose. “You can use the building for a wedding reception. We have funeral dinners here.” It houses family reunions, nonprofit activities, 4-H and Girl Scouts meetings. It also features a playground and a ball diamond.

Other pieces of Tangier have vanished. The high school closed in 1958. A railroad station shut down in 1924. The flour mill, canning factory, hotel, grade school, grocery and hardware store are history, too. The population now stands at around 100. “As you can see,” Little said, looking over his shoulder at the horizon, “there’s not much left of Tangier.”

That’s the broader answer to the question, “Why?”

The buried beef tradition began more than 30 years ago. After the school was razed in ’78, residents saw the need for something to preserve the town. About that same time, Covered Bridge Festival officials told Tangier resident and Liberty Township trustee Melvin Cruse they needed an additional rest stop for the festival bus tours and the little town in the county’s northwest corner would be perfect, considering it was home to five covered bridges.

Cruse learned to cook buried beef with a friend at a Fourth of July celebration in another state years before. He borrowed the idea for Tangier, and it became a hit. They initially dug the pit in the earth, but later formalized the process with firebricks from Terre Haute’s old Midland Glass plant. They’ve been cooking and selling it ever since, a process that helped fund the new community center’s construction and then maintain it.

The relentless passing of time adds luster to such a tradition, but also threatens it. That was the case five years ago. That’s when Caswell called Shirley Brown, a recent retiree, and asked her to serve as the organizing cook. Why? “The ladies were getting up there in years,” said Brown, now 68. They needed her energy to keep the tradition from ending.

Still, experience is the rule, rather than the exception, on Tangier’s buried beef team. The kitchen crew, which serves tourists from around America who line up cafeteria style, includes a trio of octogenarians — Wanda Grimes, Barb Kiger and Imogene Goebel. Grimes’ husband, David, worked as principal of Tangier High School. Kiger joined the Tangier kitchen crews the first year the buried beef was offered.

Why does Kiger keep coming back? “This nut,” she said, teasingly tapping Little on the shoulder.

The 10 days of the festival are “like a reunion,” Little said.

Camaraderie helps the process. Around the pit outside, Miller, Little, Jim Cole, Benny Hicks, Spike Riley and others cracked jokes as the smoke billowed from the burning wood and the heat intensified. Floating ashes landed in Hicks’ peppered-gray beard as he puffed a cigar. Hicks and Riley attended Tangier High School until it closed, graduating from Turkey Run in 1960. Hicks’ wife, Lynette, oversees the pie-making and serving in the kitchen. Benny first drew buried beef duty after a veteran volunteer suffered a heart attack.

“I just inherited this job,” Hicks said, engulfed momentarily in a cloud of smoke. “Of course, I’m no spring chicken myself. I’m 69 years old.”

The gradual passing of torches has left the atmosphere at Tangier virtually intact. No signs of touristy commercialization are visible, unlike some of the crowded flea-markets at other festival towns. Tangier offers a cafeteria and a menu built around the beef, restrooms and a small section of crafts sold by local people.

“We try to keep it traditional, like it was when the Bridge Festival started — local people with local goods,” said Little, who grew up in Tangier, moved to Illinois, and then returned 45 years later.

Janie Carson Davis senses the authenticity as well. “This is what the festival used to be,” she said.

Davis is the lone artist selling paintings and designs at the community center. She grew up in Tangier and now lives in Pittsboro. Though she raised her family near Indianapolis, she and her adult kids still return to Tangier for the festival. “It’s been good for my children, because they have connected with their family roots,” said Davis, 69. Her parents helped organize the push for the community center more than 32 years ago.

Those roots matter, especially as the years pass.

Joe Riley, working on the community center’s serving line, was in Tangier High School’s last graduating class in 1958 — one of 18 seniors. At the time, the closing didn’t affect Riley much, he said. Its absence is felt now, though. “You do more now than you did back then,” said Riley, 72.

Riley painted a picture of the old school, which hangs on a wall in the community center. An attached engraving details its construction (in 1908), first graduation (1911), closing (1958) and demolition (1978). That way, future buried beef crews won’t forget where it all started.

And, indeed, the people of Tangier want future volunteers feeding that fire, cooking the meat, serving the food, and making those crafts.

“I always know,” Davis said, “each year when I leave [Tangier after the festival], there are some faces …”

When asked if she meant some folks will have passed away before the next October, Davis quietly said, “Yes. I always leave in tears.”