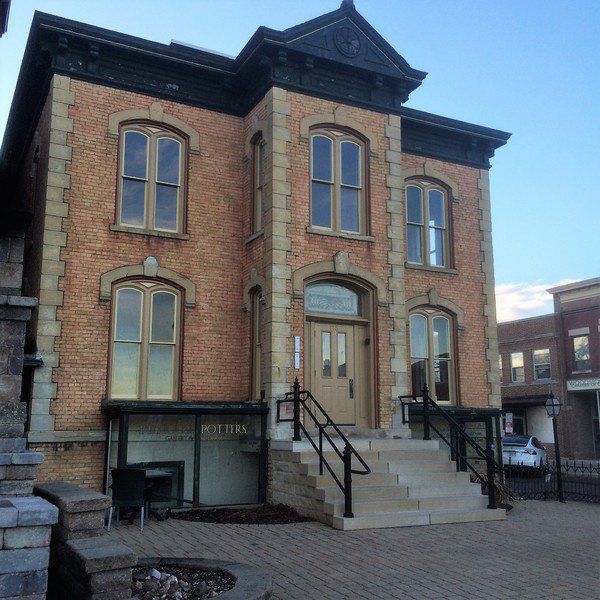 Courtesy Illinois State Historical SocietyRelic preserved: The Old Courthouse of McHenry County is one of the few pre-Civil War courthouses still standing in Illinois. Its most famous inmate was labor and social justice activist Eugene V. Debs in 1895. He was jailed for six months for leading an American Railway Union job action that affected the Pullman cars on passenger trains. 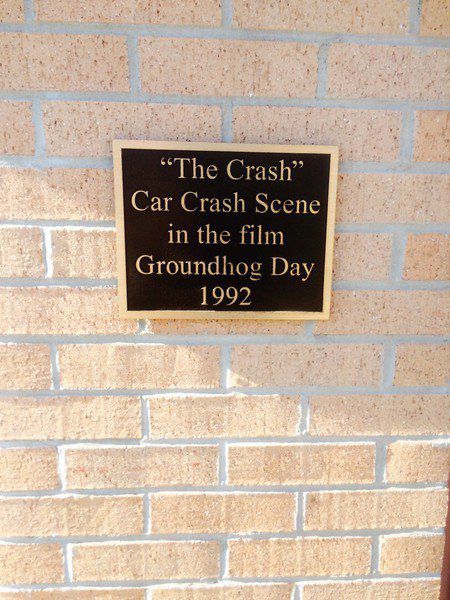 Courtesy Illinois State Historical SocietyColorful history: The 1993 comedy “Groundhog Day” was filmed in Woodstock, Ill. This historical marker is one of several in the town, guiding visitors to points of interest related to the Bill Murray movie. The town is also the site of the Old Courthouse of McHenry County, where Eugene Debs was jailed in 1895, and its theater served as a launching pad for legendary movie director Orson Welles, who lived there.

Courtesy Illinois State Historical SocietyRelic preserved: The Old Courthouse of McHenry County is one of the few pre-Civil War courthouses still standing in Illinois. Its most famous inmate was labor and social justice activist Eugene V. Debs in 1895. He was jailed for six months for leading an American Railway Union job action that affected the Pullman cars on passenger trains.

Courtesy Illinois State Historical SocietyColorful history: The 1993 comedy “Groundhog Day” was filmed in Woodstock, Ill. This historical marker is one of several in the town, guiding visitors to points of interest related to the Bill Murray movie. The town is also the site of the Old Courthouse of McHenry County, where Eugene Debs was jailed in 1895, and its theater served as a launching pad for legendary movie director Orson Welles, who lived there.

The small Illinois town of Woodstock, and the legacy of an unlikely friendship forged there, offer a lesson for people everywhere, including Terre Haute.

That community of 25,528 residents, northwest of Chicago near the Wisconsin border, already helped give the world a timeless reminder about the pitfalls of selfishness. The 1993 comedy classic “Groundhog Day” was filmed in Woodstock. The movie brought stars Bill Murray, Andie MacDowell and others to town. The cast portrayed the fictional story of TV weatherman Phil Connors transforming from a callous narcissist to a magnanimous friend while his life gets stuck in a time loop while reporting on the annual Groundhog Day wackiness in Punxsutawney, Pa. (Woodstock played the role of Punxsutawney.)

Phil discovers life is happier when we put the needs of others above our own preferences.

That attitude is also the one thing Eugene Debs and George Eckert had in common in 1895. Later this year, a historical marker will be placed at the historic Sheriff’s House and Jail, recognizing the six months Debs spent in the McHenry County Jail at Woodstock for refusing to cease leadership of a strike by American Railway Union workers against Chicago’s Pullman Palace Car Co. Though Debs was a federal prisoner, he was sent to serve his time in the Woodstock jail to avoid violence at a facility in Chicago. Eckert was the McHenry County sheriff.

Even after the passing of 123 years since his stint in the Woodstock jail, Debs, a Terre Haute native, still stirs political controversy.

In May of this year, the Woodstock City Council approved the historical marker for the Sheriff’s House over the objections of opponents insisting that such a commemoration could be “viewed as celebrating socialism and labor unions.” The council OK’d the marker unanimously.

It was during Debs’ incarceration there that he embraced socialism, leading to his five runs for the presidency atop the Socialist Party ticket. Prominent activists and Debs’ attorney, the up-and-coming Clarence Darrow, visited him at Woodstock. Debs’ stay put the town in headlines across America.

It was also there that Debs, often vilified in the newspapers as a “radical,” developed a lifelong friendship with Eckert, a conservative sheriff and a Union Army veteran of the Civil War. They respected each other. During Debs’ sentence, Eckert even took him hunting. For nearly 30 years afterward, they kept in touch. Debs was imprisoned for sedition after criticizing the motivations behind World War I, and following his release in 1921, Eckert and his daughter drove to Elmhurst, Illinois, to visit the aged Debs, recovering in a sanitarium.

When Eckert died in 1923, Debs eulogized the lawman as “a true friend to me,” and “a considerate, kind and thoughtful husband and father. A good neighbor, a devoted citizen of this commonwealth, and a worthy veteran,” according to the Woodstock Independent’s archives.

How different were the two men? “Almost as opposite as you can be, almost like Nancy Pelosi and Donald Trump,” said Steve Aavang, a sixth-generation Woodstock resident who has portrayed Eckert in local theatrical productions.

Their friendship is merely the subplot of the historical marker recognizing Debs’ jailing in Woodstock. The primary reason for the marker and, thus, the town’s somewhat accidental place in Debs’ history is, of course, his notoriety as the father of the American labor movement and his political conversion while behind bars there to become the nation’s most famous socialist.

“You could say it was his ‘Birmingham jail experience,’” said William Furry, executive director of the Illinois State Historical Society. Furry was referring to civil rights leader Martin Luther King Jr.’s stint in that Alabama city’s jail, where he wrote a legendary letter defending nonviolent resistance to racism.

Recognition of Debs’ moment in Woodstock almost got derailed by opposition that first bubbled up last year.

“It looked like some people, with [2016] being an election year, were going to raise a fuss,” said William Furry, executive director of the Illinois State Historical Society. A nonprofit group that raises funds to restore McHenry County’s historic Old Courthouse and Sheriff’s House and Jail opposed the placement of a Debs marker, wary that it would inhibit future donations, given his legacy with socialism and labor unions.

“The pushback is very isolated and very reactionary,” said Aavang.

It also stands in contrast to the bond that developed between the key players in that 1895 event — Debs and Eckert. This sheriff, armed with his beloved Union Army rifle, held off a lynch mob that gathered after federal marshals turned Debs over to Eckert. When Eckert made clear he would use the gun on the mob, they scattered. Despite their political differences, Eckert “knew Debs was a political prisoner. He knew [Debs] wasn’t the most dangerous man in America,” Aavang said.

Instead, Debs guided his fellow prisoners in daily fitness workouts, history and economics lessons, and issue debates, according to the Woodstock Independent. Debs and the inmates played football and ate with Eckerd’s family, which lived in the jailhouse.

More than a century later, the Old Courthouse, Sheriff’s House and Jail are on the National Register of Historic Places, but have fallen into disrepair. “There’s a lot of work to be done on both buildings,” said Nancy Baker, the Woodstock city planner and lifelong resident of that area. The city assumed ownership of the structures after a “lengthy legal process,” she added.

The controversy that arose over the Debs marker, which is still in production through the Illinois State Historical Society, thrust the background of the buildings and its connection to Debs into the public spotlight. Local folks learned a slice of their community history. “It definitely served an educational purpose,” Baker said of the debate.

Fortunately, it resulted in a 7-0 approval vote by the city council. Debs’ development into one of the 20th century’s most influential Americans during his six months in the Woodstock lockup represents a significant element of the town’s heritage, right alongside Orson Welles’ directorial roots, the birthplace of “Dick Tracy” cartoonist Chester Gould, and, yes, “Groundhog Day.”

The town celebrates “Groundhog Day” with gusto each February, and several sites shown in the movie are designated for tourists with plaques or markers. A fundraising project got underway earlier this year for a mural near the Opera House, depicting Gould, Welles, “Groundhog Day” and actors Paul Newman and Geraldine Page, who performed there early in their careers, according to a Northwest Herald story.

Now, the Debs marker, likely to be completed and unveiled in early fall, will join the others.

“I think the vast majority [of Woodstock residents] understand that all of that history together helps make us a tourism destination,” Baker said.

Indeed, when asked for a comment last week on the Debs marker, Friends of the Courthouse board member Julie Miller, said the group’s “position regarding the Eugene Debs plaque is no longer relevant, as the Woodstock City Council has approved its installation.” Then Miller added, “We believe that public awareness of the buildings’ historical and architectural significance is beneficial to our mission of raising funds for their preservation and reuse.”

Woodstock, Ill., where Debs resided for just six months, has found peace with a historical figure who championed women’s right to vote, child labor laws, Social Security, civil rights and labor freedom — all radical concepts when Debs did time in George Eckerd’s jail and dined at the sheriff’s table. Maybe Terre Haute, Debs’ lifelong home, should loosen up its acceptance of his legacy, too.