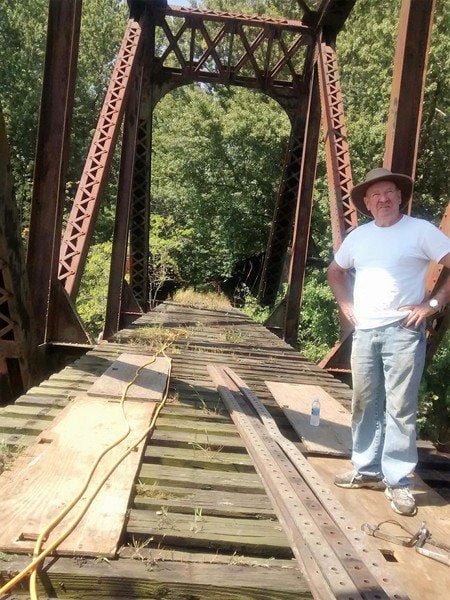 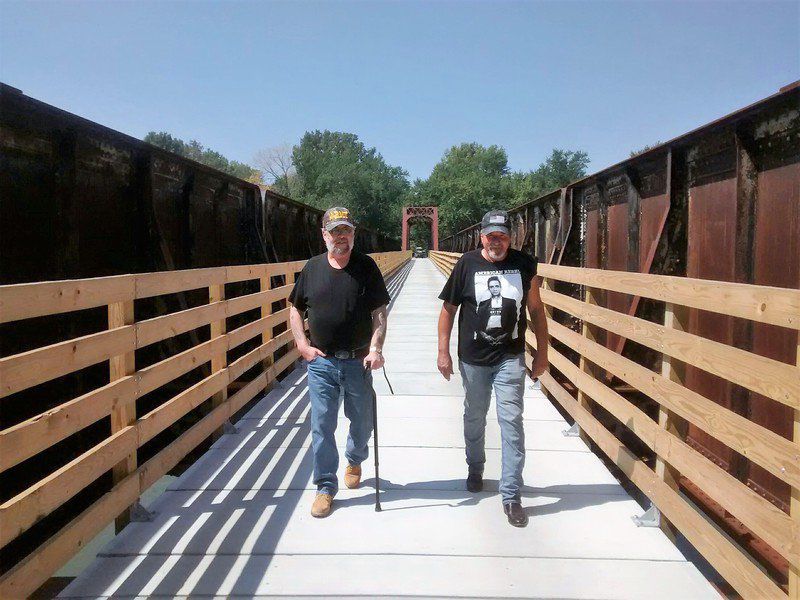 Tribune-Star/Mark BennettTesting it out: Retired veterans Norm Jack of Rockville and Terry Cox of Bloomingdale walk Tuesday morning across the yet-unfinished pedestrian pathway on the Montezuma B&O Railroad Bridge. 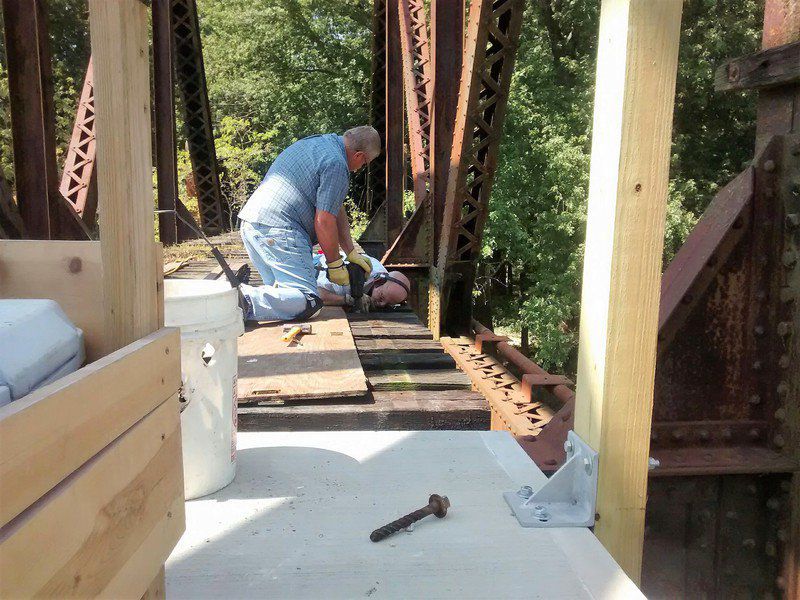 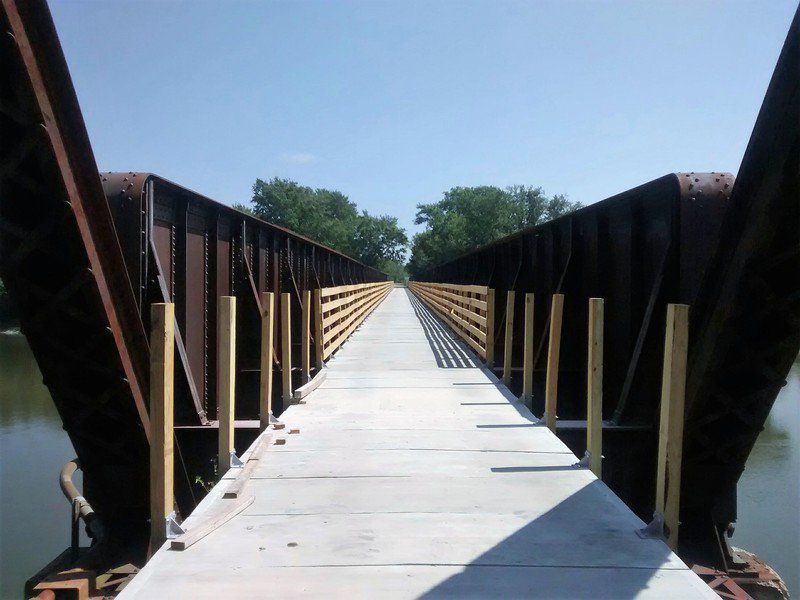 Tribune-Star/Mark BennettWalk through history: The concrete pathway across the Montezuma B&O Railroad Bridge over the Wabash River is more than two-thirds complete. The volunteer crew expects to complete the project before next month's Parke County Covered Bridge Festival. 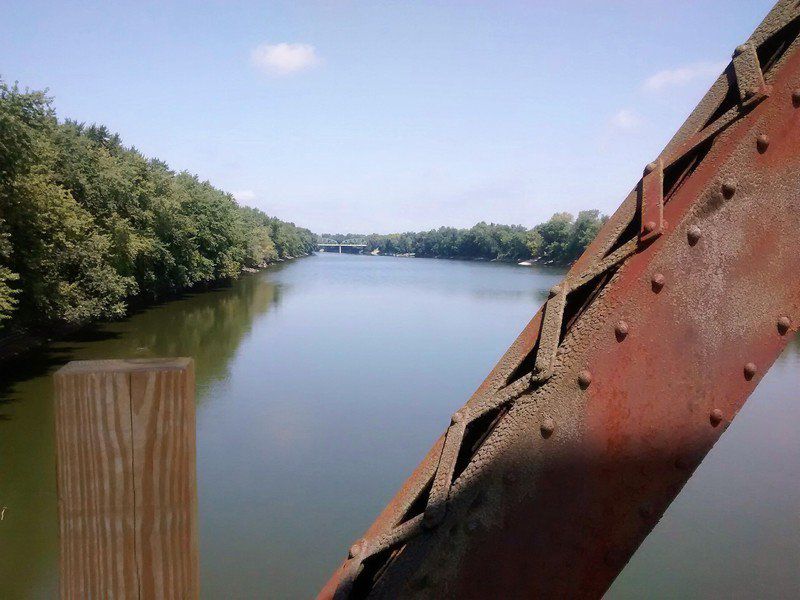 Tribune-Star/Mark BennettPicturesque: A breathtaking view of the Wabash River can be seen on the old Montezuma B&O Railroad Bridge, which was originally built in 1895, according to the Indiana Department of Natural Resources. 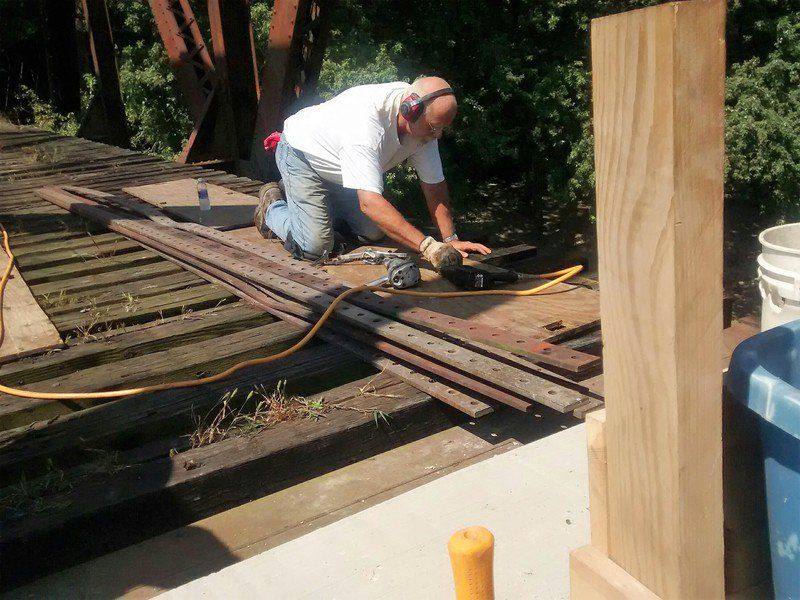 Tribune-Star/Mark BennettOne piece at a time: The task of transforming a 900-foot railroad bridge into a pedestrian and bicycle pathway involves disassembling the rails and their supporting elements, such as ties, strapping, spikes and clamps. Jim Meece, a Parke County commissioner, works to loosen a clamp Tuesday morning at Montezuma.

Tribune-Star/Mark BennettTesting it out: Retired veterans Norm Jack of Rockville and Terry Cox of Bloomingdale walk Tuesday morning across the yet-unfinished pedestrian pathway on the Montezuma B&O Railroad Bridge.

Tribune-Star/Mark BennettWalk through history: The concrete pathway across the Montezuma B&O Railroad Bridge over the Wabash River is more than two-thirds complete. The volunteer crew expects to complete the project before next month's Parke County Covered Bridge Festival.

Tribune-Star/Mark BennettPicturesque: A breathtaking view of the Wabash River can be seen on the old Montezuma B&O Railroad Bridge, which was originally built in 1895, according to the Indiana Department of Natural Resources.

Tribune-Star/Mark BennettOne piece at a time: The task of transforming a 900-foot railroad bridge into a pedestrian and bicycle pathway involves disassembling the rails and their supporting elements, such as ties, strapping, spikes and clamps. Jim Meece, a Parke County commissioner, works to loosen a clamp Tuesday morning at Montezuma.

“Ffft-ffft-ffft-ffft.” The rapid-fire bursts of an impact wrench echoed through the Wabash River valley.

The power tool’s operator was a retiree, perched 30 feet above the waterway on the rails of an abandoned railroad bridge. A crew of volunteers has worked six days a week since spring to transform the old Montezuma B&O Railroad Bridge into a pedestrian bridge over the Wabash. They’re disassembling the rails, their iron connections and deteriorated wooden ties, and then replacing the tracks with new concrete slabs.

They’re both 68 years old. The ages of the rest of the crew range from 64 to 73. These guys have completed nearly three-fourths of the 900-foot bridge conversion. “There’s nothing in this for them,” Meece said of his cohorts, “other than the satisfaction that you do a good thing.”

Such can-do-ism has a track record in Parke County. More than a decade ago, volunteers and thousands of donated dollars and materials helped the county rebuild the iconic Bridgeton Covered Bridge and reopen it just 17 months after an arsonist burned it down. Generosity and elbow grease reduced the cost of that project from the original $1.5 million estimate to less than $250,000, as reported by the Tribune-Star in 2006. Combining forces of unconnected groups for that task wasn’t simple, Meece recalled, but the collective determination for a “common cause” prevailed.

“It was the best thing I’ve ever been a part of,” said Meece, a retired teacher and fourth-term Parke County commissioner.

Eleven years later, Parke County is on the brink of unveiling a rare Hoosier amenity — a pedestrian bridge across the Wabash.

Only Peru, Bluffton and Lafayette in Indiana share that distinction, along with a small footbridge at the river’s headwaters in Fort Recovery, Ohio. Volunteers intend to open the converted Montezuma bridge to hikers and bicyclists before the popular Parke County Covered Bridge Festival commences Oct. 13.

“I think it’s gonna be awesome,” said Terry Cox of Bloomingdale, as he and fellow retired veteran Norm Jack strode across the still-in-progress bridge Tuesday. “It’s just a scenic atmosphere and a good place to get a little sunshine.”

And, like the Bridgeton Covered Bridge’s resurrection, the Montezuma pedestrian bridge project involves no local tax dollars, Meece emphasized. The project is funded by a $150,000 grant from the Wabash River Heritage Corridor Commission, a state entity funded by royalties from oil pumped out of the riverbed in Gibson County and administered by the Department of Natural Resources. The grant requires a 20-percent local match, which can come in the form of money, labor or other resources, said Phil Bloom, the DNR’s director of communications.

Parke County chose labor for most of its “soft match,” all donated. That’s a significant contribution. Some volunteers have put in six-hour days, six days a week since May. “That cost would be way above what the soft match would be,” Meece said.

Abandoned bridge still has use

Their work is tedious. Progress comes in 12- to 18-foot stages. The longitudinal iron beams that have supported the rails and ties for a century are being preserved, but must be cleaned of rust and tar and then reset. The Indianapolis-made concrete panels — 10 feet wide, 40 inches deep, 5 1/2 inches thick and one ton in weight — are set atop the iron beams by a forklift. I-bolts secure the panels.

And, of course, they’re perched dozens of feet above the water. Often, volunteers crawl toward their spot of the day’s work. “We just be careful,” Meece quipped, “otherwise we’d just end up in Terre Haute or Vincennes eventually.”

As of mid-week, the volunteers had completed the walkway panels and handrails for nearly four of the six spans comprising the bridge. It was originally constructed for the Baltimore and Ohio Railroad in 1895 as a swing bridge that could pivot its midsection to allow boats to pass through when the Wabash was a commercially navigable river. The turnstile fixtures remain visible on the piers tops. It was revised in the 1920s for its present, fixed configuration.

It’s been abandoned since 2001. “The bridge was just there, doing nothing,” Meece said. Eventually, its future emerged as a pedestrian bridge and a picturesque link to a potential trail system through Parke County on the east bank of the Wabash and Vermillion County on the west bank.

Such quality-of-life amenities matter in Parke County. Its economy relies on farming and tourism to its 31 covered bridges and famous 10-day festival, which draws nearly 2 million visitors every October. “We’re just not going to have big industry because we don’t have the infrastructure to do that,” Meece said. Instead, the county attracts residents who work in nearby urban areas but enjoy a rural lifestyle.

A pedestrian bridge over the official state river adds to that appeal. “It’s just one more thing that families can have for their kids to do,” Meece said.

So as discussions about the bridge revival began more than two years ago, the county starting researching the concept of public trails for hikers and cyclists. Meece traveled to other Hoosier counties with trails to hear the pros and cons, such as concerns of farmers that pedestrians would leave trash along the paths. Meece talked with county sheriffs and commissioners, and locals.

On one visit, met with a group of farmers at a diner. “One of them said, ‘Well, you need to know from the get-go that I thought [a local trail system] was the dumbest thing and the biggest waste,’” Meece recalled. “And I said, ‘Well, that’s what I wanted to know.’ Then he said, ‘But I was wrong.’” The farmers became advocates of the idea there.

Back in Parke County, officials sought the state grant for the Montezuma bridge and got it approved in February 2015.

The completion of the bridge’s conversion is part of an ongoing effort in trails development. The bridge’s east end leads to the outskirts of the town of Montezuma, with streets, the community’s Reeder Park, some businesses, services and U.S. 36 nearby. The west end of the bridge empties into the river bottom wilderness of neighboring Vermillion County, where no trail has yet been constructed.

So, for now, a walk across the Montezuma bridge must be its own adventure. “I’ll have friends say, ‘What do you do when you get to the other side [of the bridge]?’” Meece said. “And I say, ‘Well, you come back.’”

Vermillion County is in the early stages of developing a 14-mile trail from the bridge westward through the town of Hillsdale and beyond, said Tim Yocum, a county commissioner. A bridge must be built over a drainage area, the process of securing properties along the route continues, and a trails oversight group is in the formative stages, Yocum added. The latter step will enable the county to seek grants.

Yocum looks forward to its completion and the day when he can “take the torch from [Meece] when he comes across” the bridge.

“And my coffee friends,” Meece added, “are coming Tuesday to put up the railing.”